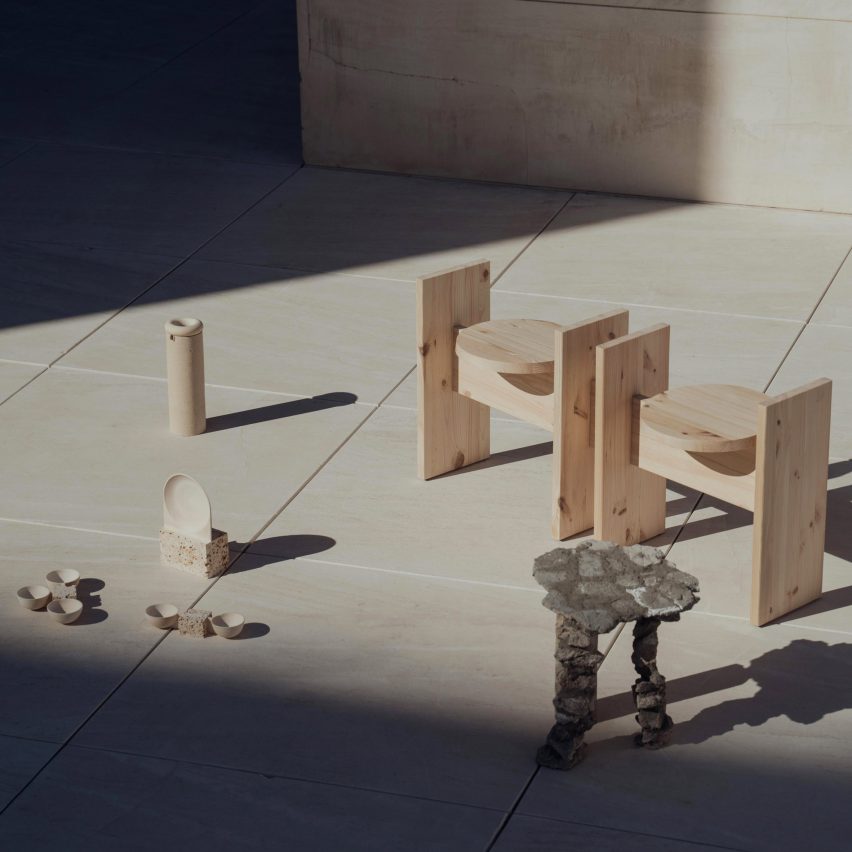 Barcelona-based designer Sanna Völker has curated a collection of seven furniture and homeware pieces, which were created during coronavirus lockdown to reflect the unique limitations and opportunities of the current moment.

The pieces in the project, called Km Zero, include two benches and stools, a teapot and ceramics set and a trio of vessels, and were created by seven different Spanish design studios.

Each product was crafted within one kilometre of the designer’s home. The materials were sourced from within the same radius in order to explore the possibilities awarded by local production.

“In Spain, as lockdown started to ease, we were allowed to go for walks in our immediate neighbourhoods,” Völker told Dezeen.

“We couldn’t exceed the one-kilometre limit but we could stroll around our closest streets during a few restricted hours each day. This is the moment where many of us discovered workshops and artisans located just a few hundred meters away from our homes and studios.”

Several of the objects deal with the loneliness of social distancing and the ways in which the pandemic has reminded us of the importance of community and collaboration.

Industrial designer Marta Ayala Herrera created a wooden bench with two individual, round seats separated by protruding armrests, to reflect on the isolation of the individual in Western society.

“The context in which we live rewards and encourages this tunnel vision and the construction of everyone’s bubble,” explained Herrera.

“However, the arrival of a crisis in the space where we live has exposed the shortcomings and inconveniences that this type of society offers us.”

That’s why, although the bench might appear to allow users to sit separately, the seats are actually dependant on their shared base in order to stand.

Madrid-based Paula Clavería focused more on the materiality of her immediate surroundings and forged her No2 stool from abandoned rubble and granite pieces found on the streets of the La Latina and Lavapiés neighbourhoods.

These are stacked on top of each other and cobbled together into a Flintstone-like, three-legged seat, designed to represent the bricolage of buildings that make up these districts.

Beyond curating the project, Völker also contributed a teapot, called Presence, which consists of a cylindrical body and a strainer with an oversized, doughnut-shaped rim.

When water is poured into the strainer, it slowly drips into the main body of the pot through a small hole at the bottom.

“Presence is an object that explores the personal experience of truly slowing down,” said the designer, who created the piece in collaboration with a local ceramics workshop.

“Through combining the tea ceremony with the soothing sound of water, the project reflects on time and on staying present. The piece questions our constant search for efficiency and optimisation and invites a shared moment of stillness by focusing on sensorial information.”

Barcelona’s Turbina Studio contributed a series of bowls and plates, in which perfectly smooth, concave shapes are embedded into roughly textured bricks to create the impression of fossilised artefacts.

The series, called Future Archeology, is made from fired clay and cast stone and hopes to make us consider whether the way towards a more sustainable future might be to look towards the past.

Omayra Maymó‘s 1927 stool features a seat that has been formed by wrapping a piece of rope repeatedly around its geometric frame. The rope was made by a local artisan from a type of grass fibre called esparto, which is native to Spain.

Also featured in the collection is a bench by Isaac Piñeiro, fashioned from a piece of bent, laminated wood that had been collecting dust in his studio, and a series of vessels, created by Júlia Esqué using offcuts from a nearby metal workshop.

“Producing and consuming locally has been on our minds for years but sometimes, until we’re forced to act upon an idea, we don’t fully commit to it,” Völker said.

“Due to the current situation, we are finally doing what we have been wanting to do for quite some time now. And at least for some time ahead, we will have to make use of our local resources and opportunities.”

Völker, who was born in Sweden, has curated a group exhibition for the past three years, focusing on different pressing social issues each time. In 2018, Perception focused on the impact that Instagram has on our experience of exhibitions and came complete with a mandated social media blackout.

With this year’s agenda dominated by the pandemic, a slew of other designers have unveiled furniture and home objects for a “new normal”.

Mexican architect Enrique Tovar has designed a foldable desk that can be carried to different locations, while UK brand UNIT Fabrications has developed a series of mobile screens for a local primary school to enact social distancing.

Photography is by David Leon Fiene.

The post Seven designers share objects created within a kilometre of home during lockdown appeared first on Dezeen.