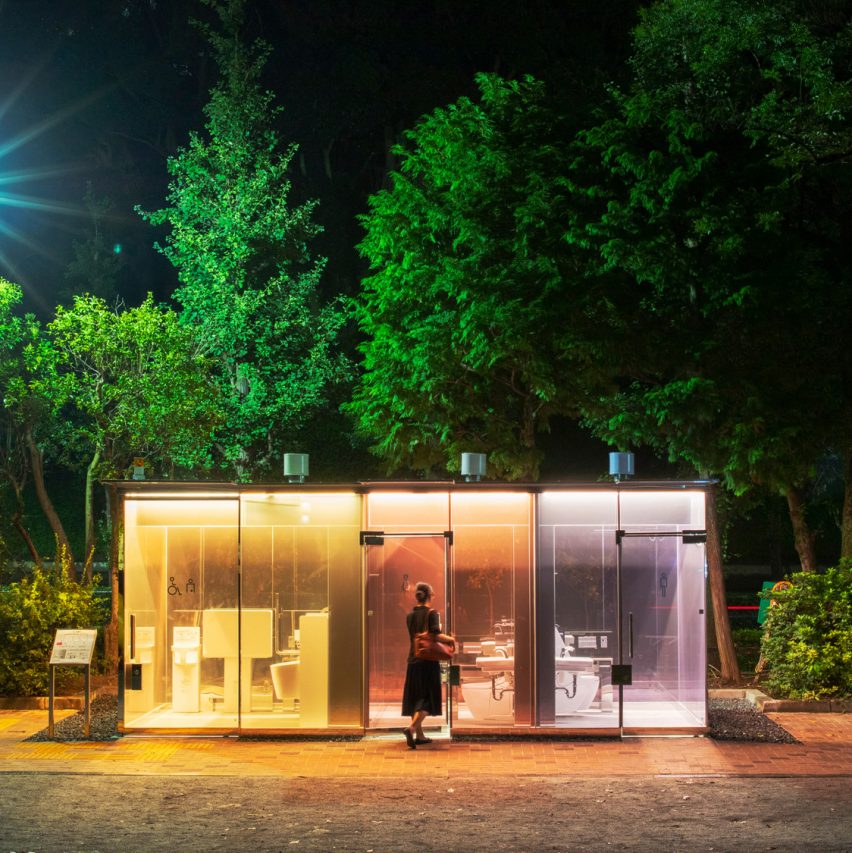 Pritzker Prize-winning architect Shigeru Ban has designed two public toilets in Tokyo with transparent glass walls that become opaque when they are occupied.

Built in the city’s Yoyogi Fukamachi Mini Park and the Haru-no-Ogawa Community Park, the pair of restrooms feature tinted-glass walls to enable those approaching to easily check whether they are in use or not.

This see-through quality was also selected to reassure users that the facilities are clean without them having to enter the toilet block first to check.

For privacy, the glass walls become opaque once the occupant has entered and locked the door.

“There are two things we worry about when entering a public restroom, especially those located at a park,” Ban explained on the project’s website.

“The first is cleanliness, and the second is whether anyone is inside,” the architect continued. “Using the latest technology, the exterior glass turns opaque when locked.”

“This allows users to check the cleanliness and whether anyone is using the toilet from the outside. At night, the facility lights up the park like a beautiful lantern.”

The new buildings replace two dated public toilets in a pair of small parks near the large Yoyogi Park in Shibuya.

Each facility comprises three separate cubicles – a male, female and accessible toilet – which are divided by mirrored walls.

Both structures were built according to the same design, with the exception of the colour of the glass walls.

At the Haru-no-Ogawa Community Park, the glass is tinted with hues of green and blue to complement the surrounding trees, while the toilets at Yoyogi Fukamachi Mini Park took cues from the nearby playground equipment, featuring shades of orange, pink and purple.

Ban designed the colourful amenities as part of the Tokyo Toilet project, run by the non-profit Nippon Foundation, which is enlisting the help of 16 creatives from around the world to redesign public toilets in 17 locations across the downtown district of Shibuya.

Japanese designer Nao Tamura was also one of these 16 creatives, and chose to create a bright red toilet block based on the Japanese craft of Origata gift wrapping as her contribution to the scheme.