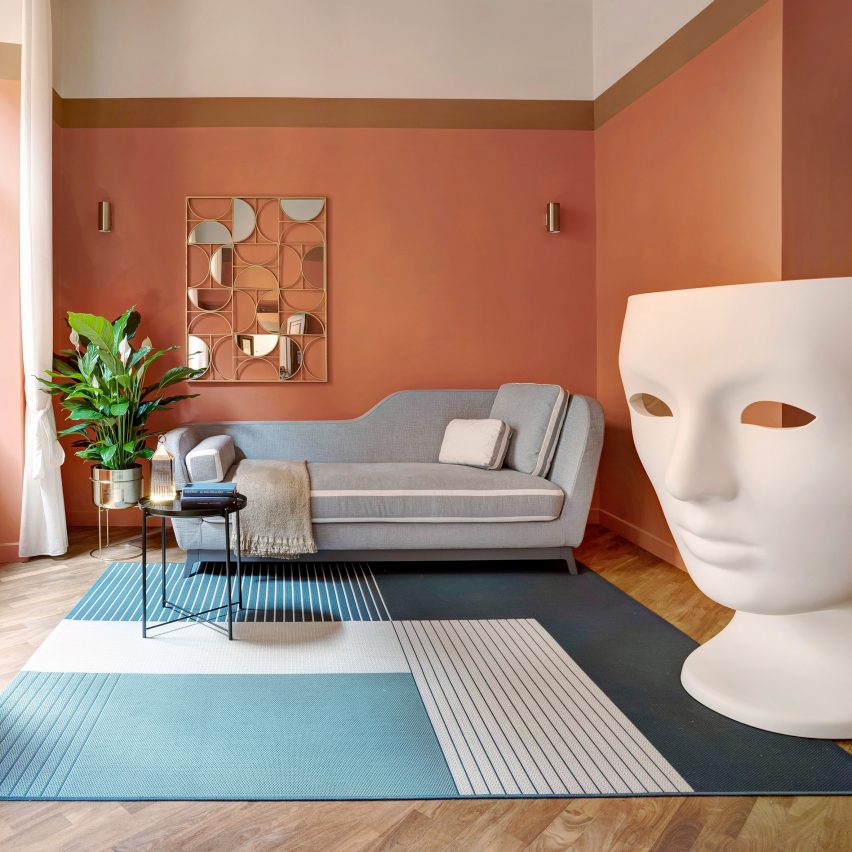 Bands of terracotta and sand-coloured paint wrap around the walls of Trevi House, a one-bed apartment in Rome that’s been overhauled by Studio Venturoni.

The apartment is situated at the heart of the Italian capital, just a stone’s throw away from the famous Trevi fountain. 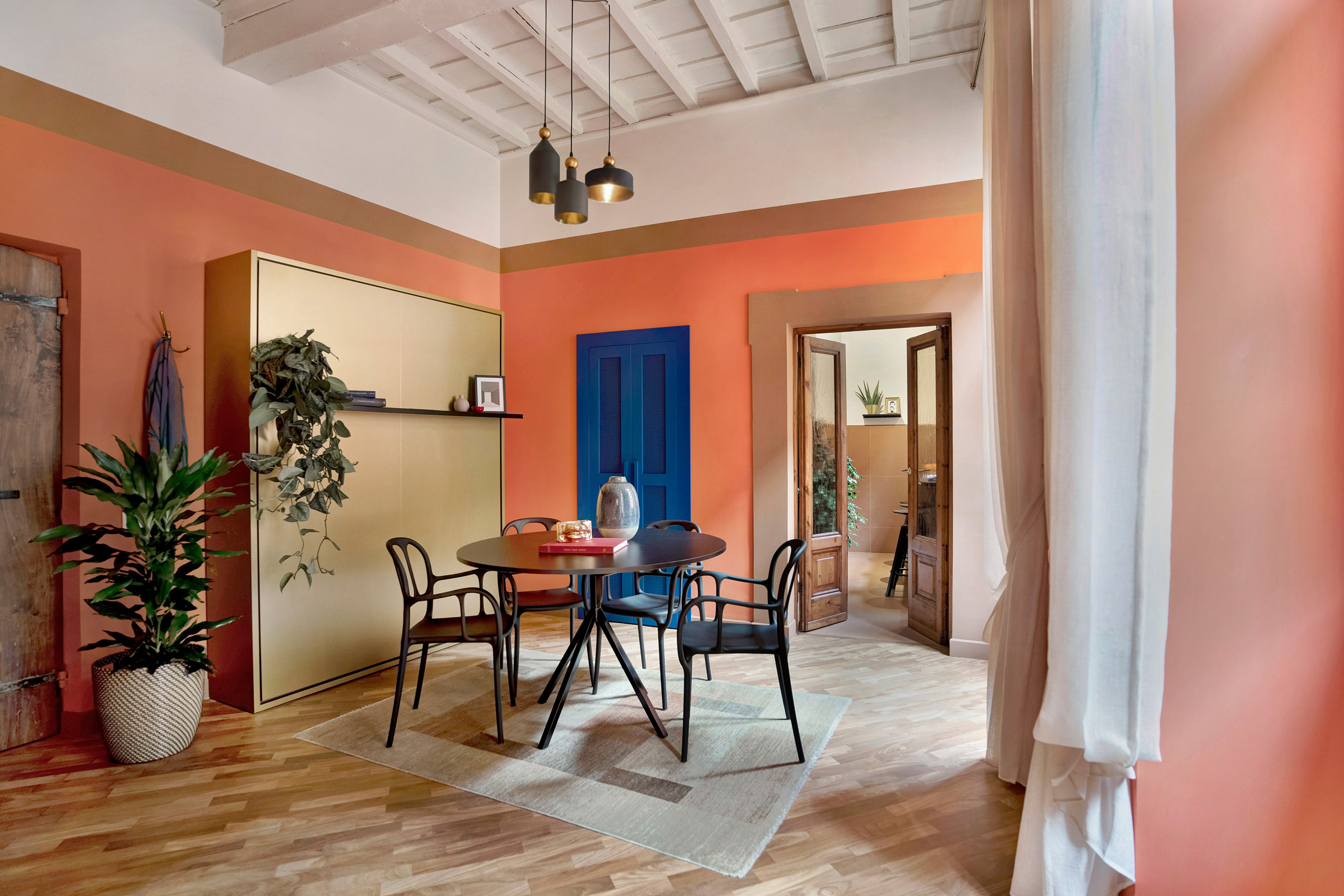 Its interior had previously been dominated by heavy masonry partitions that were splitting up the sizeable 80-square-metre floor plan into several small, cramped rooms.

Custom wooden cabinets and bookshelves accumulated by the owner were also blocking natural light from coming in. 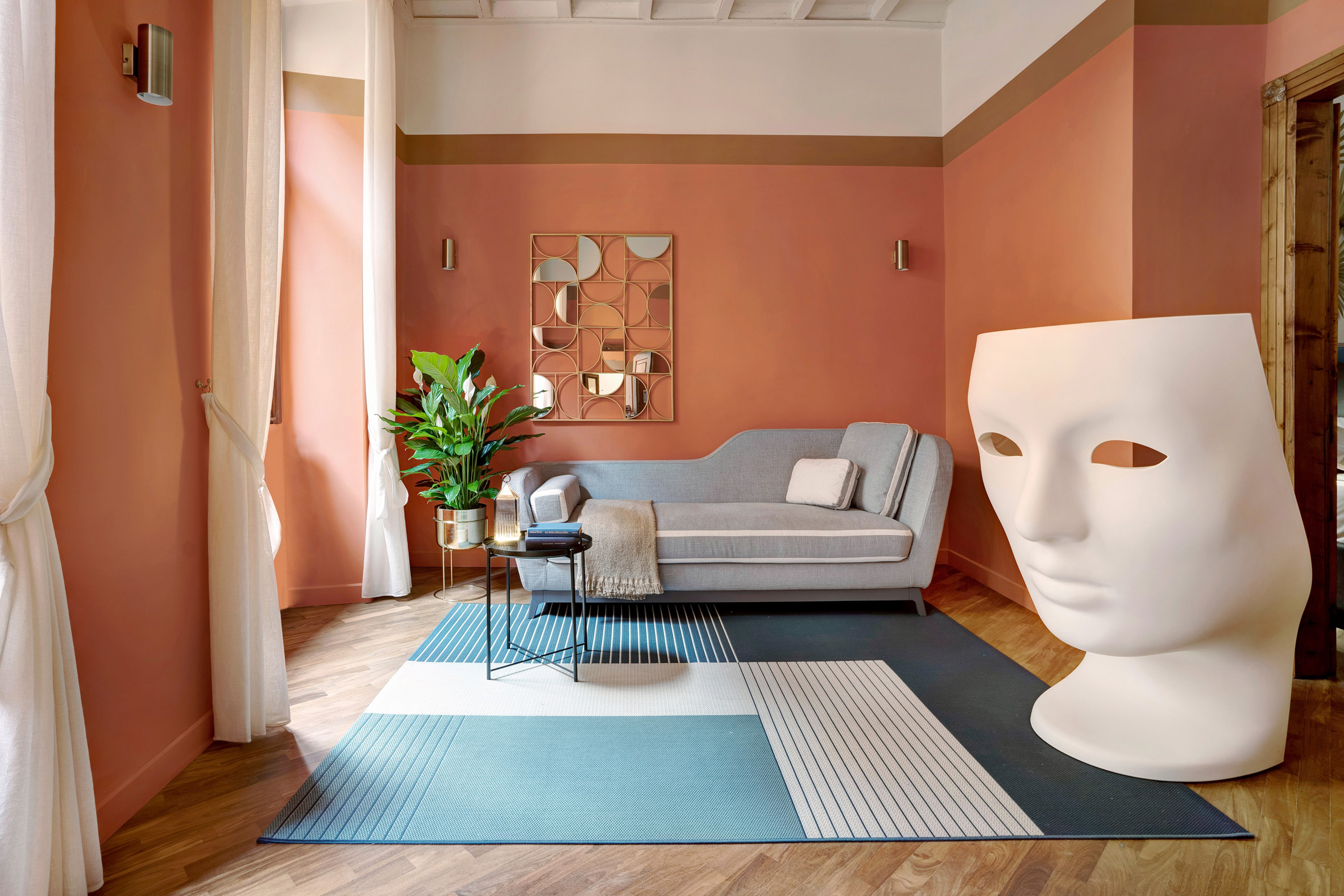 Tasked with creating a greater sense of space inside the apartment, Milan-based Studio Venturoni decided to knock through all of the existing partitions.

Studio Venturoni also hoped that the horizontal bands of colour would make the room appear wider. 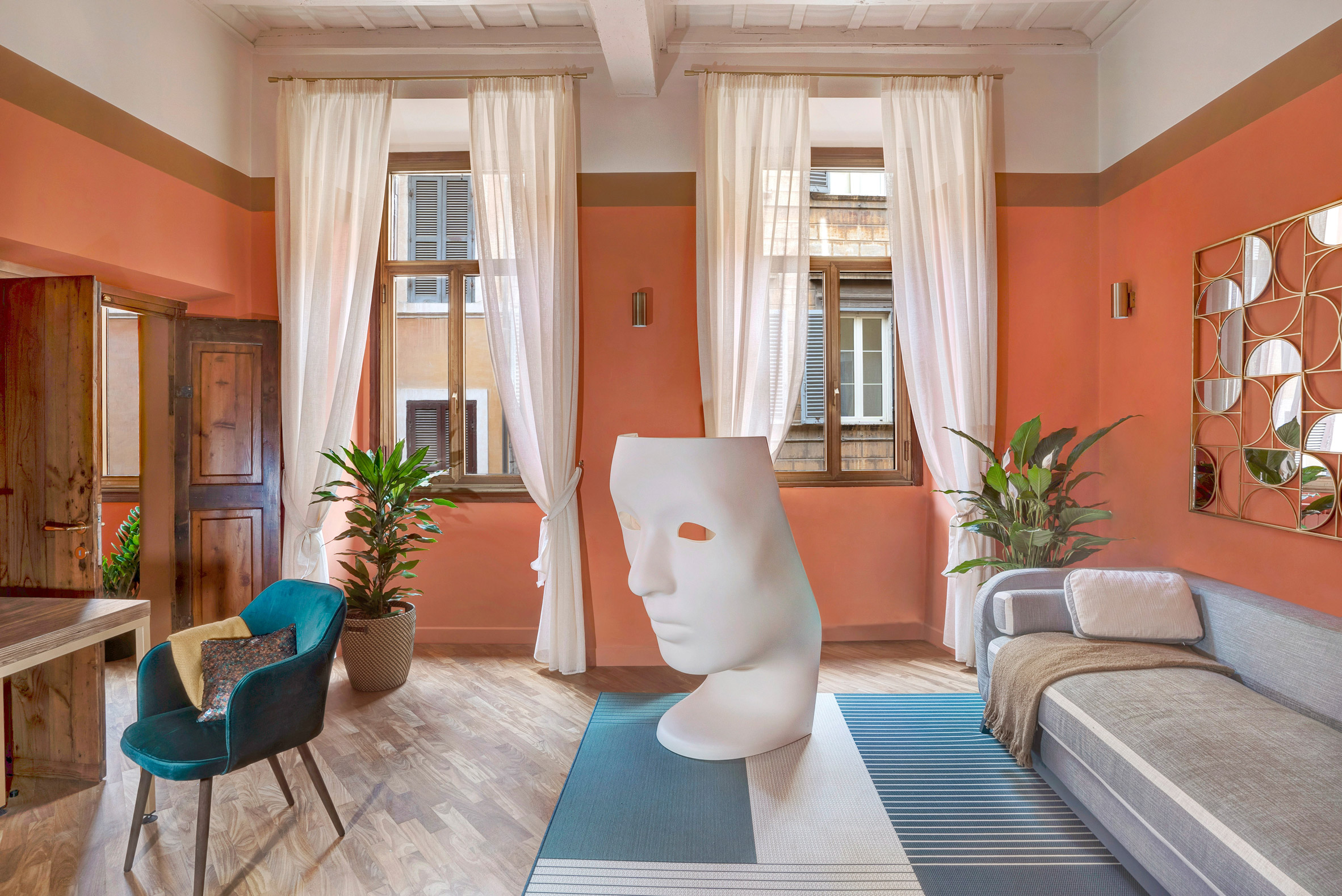 Terracotta and orange surfaces appear again in the adjacent living area, which has been dressed with a lengthy grey sofa that slightly rises up on one end like a chaise lounge.

This piece was specifically selected for its slight resemblance to a triclinium: a type of seat that would appear in the formal dining rooms of affluent Roman homes, composed of three adjoining chaise lounges on which residents would recline while being attended to by servants. 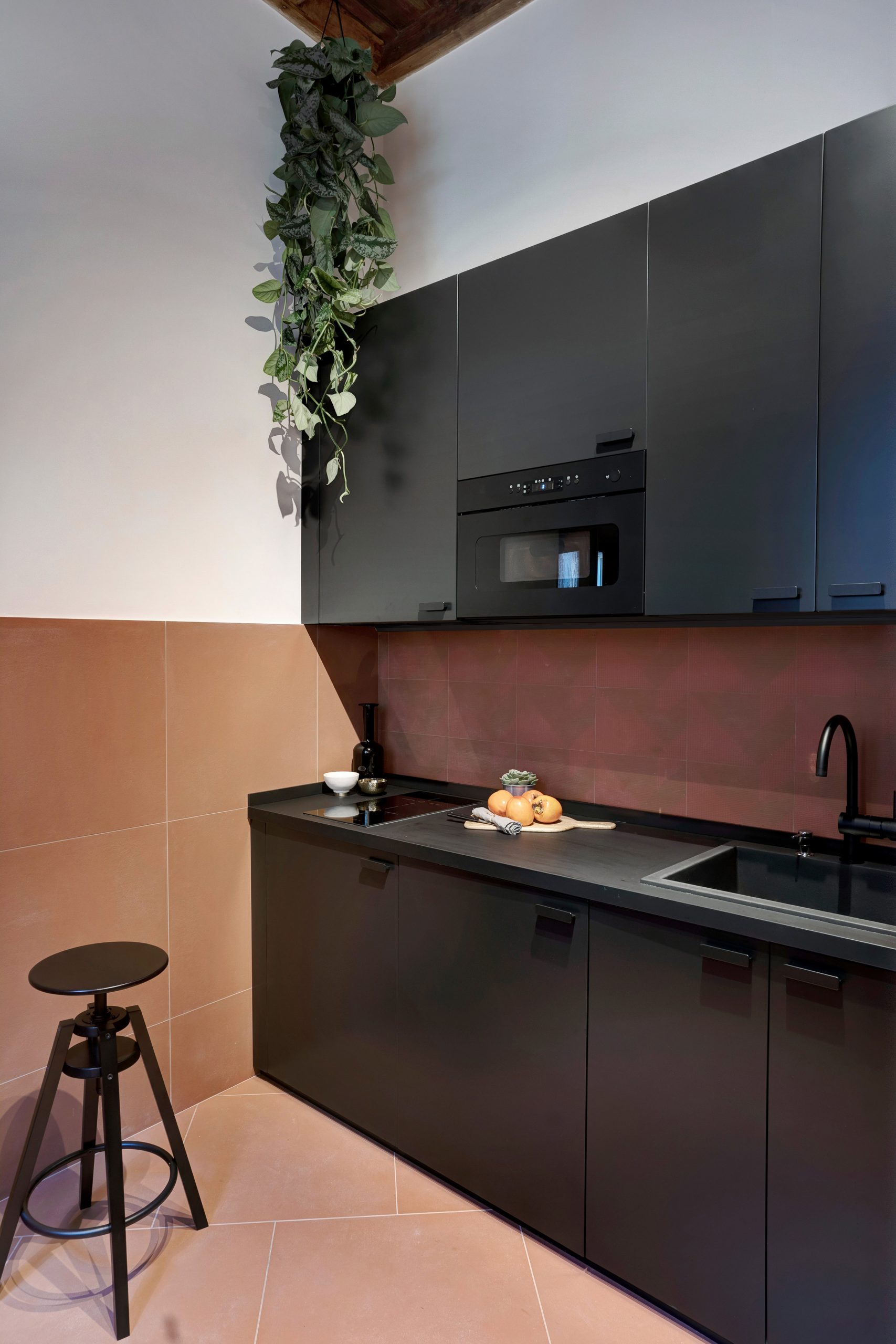 Other striking furnishings – like Fabio Novembre‘s face-shaped Nemo armchair – have been included to match the “monumental feel” of the apartment’s grandiose mahogany doors and wooden ceilings, which the studio decided to preserve during the renovation works.

“My career has allowed me to understand the importance of detail: everything must be in the right place and we should not be afraid to express bold concepts, even in a domestic setting,” the studio’s founder, Francesca Venturoni explained. 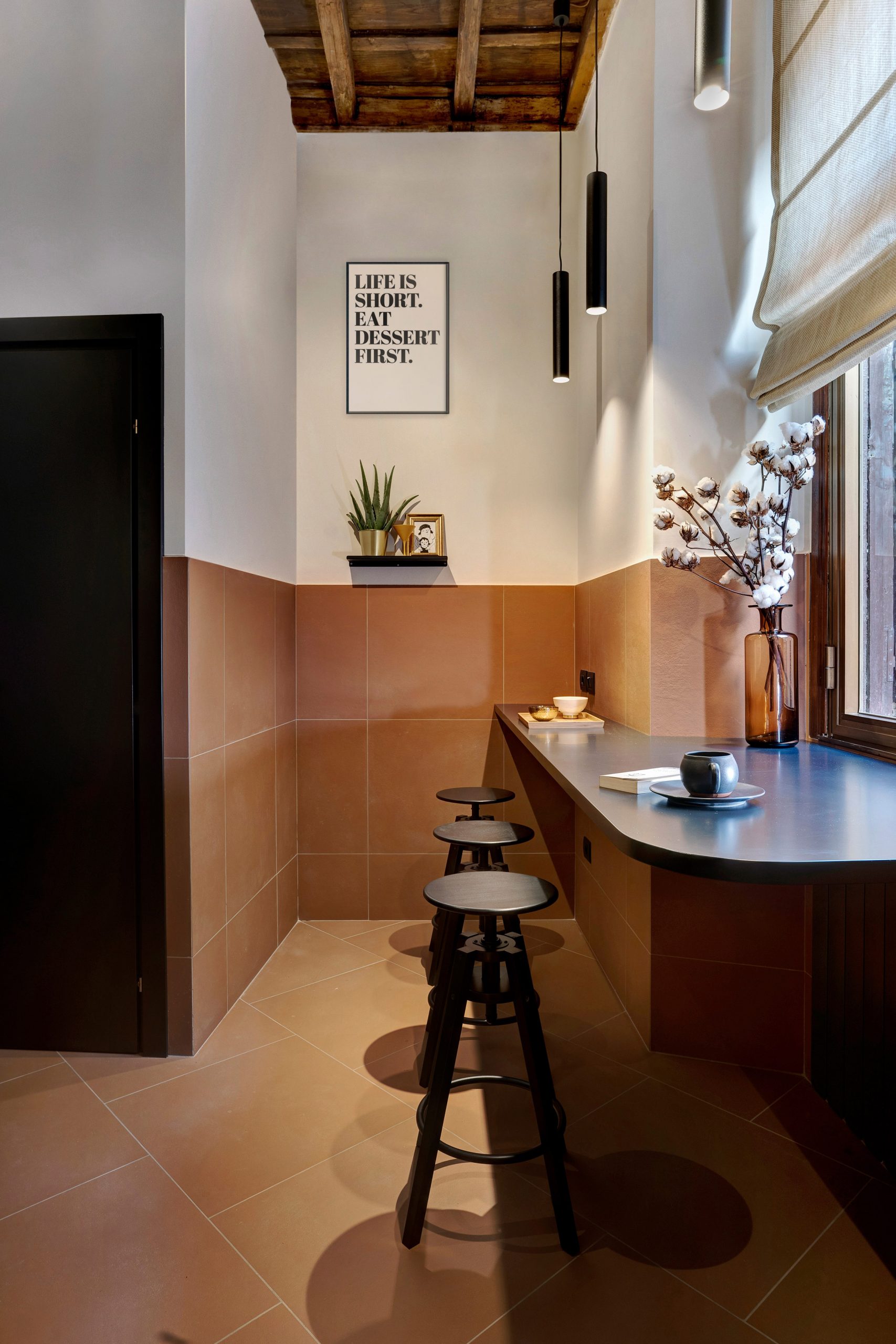 Burnt-orange tiles have been used to line the floor and the lower half of the walls in the kitchen, which was given a complete re-fit with jet-black cabinetry.

A curved black counter has also been installed directly beside the kitchen’s window, so that inhabitants can overlook the bustling tourist crowds or listen to the sound of the waters from the Trevi fountain while enjoying breakfast. 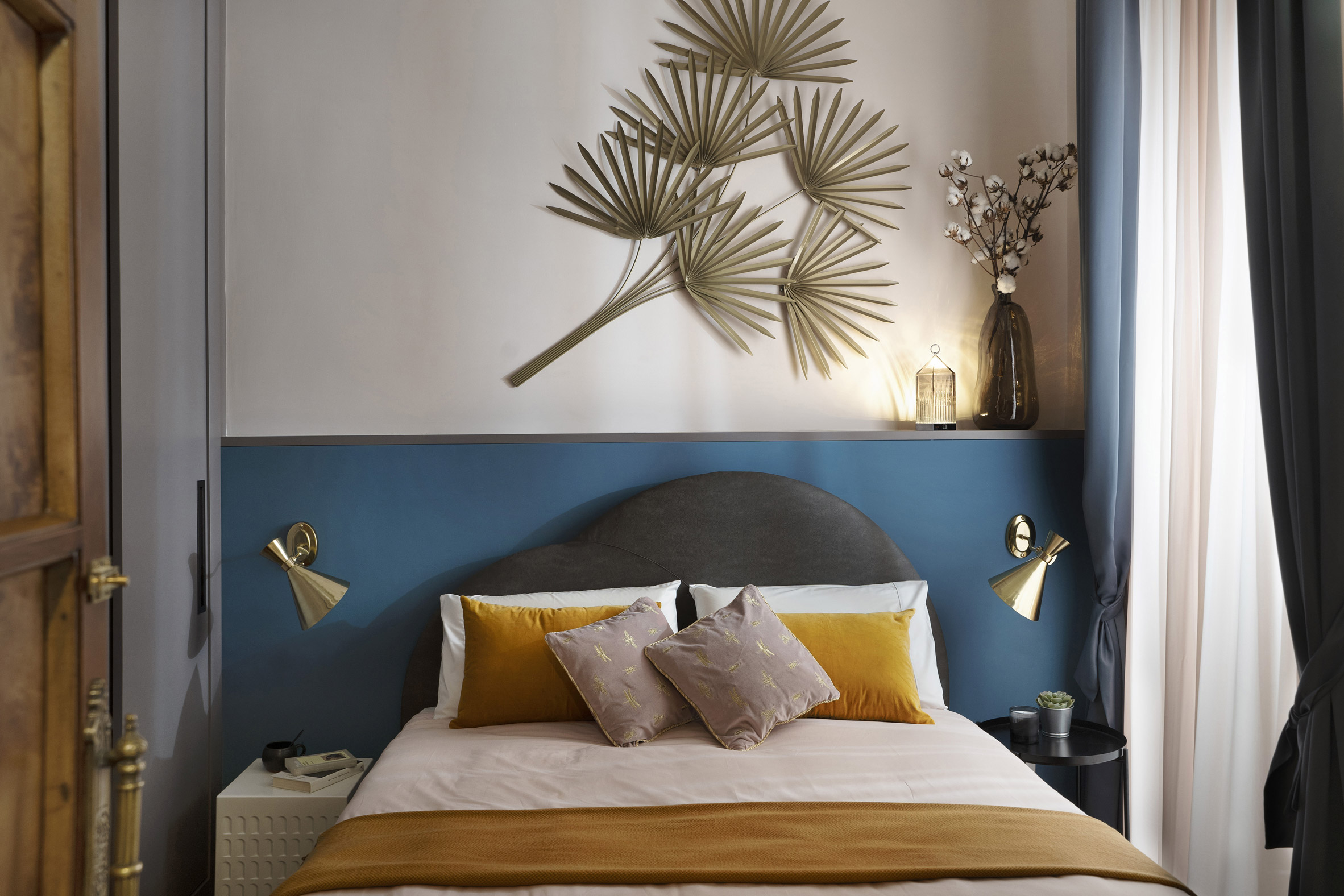 Cooler tones appear in the apartment’s bathrooms, where surfaces have been lined with grey-flecked stone tiles. 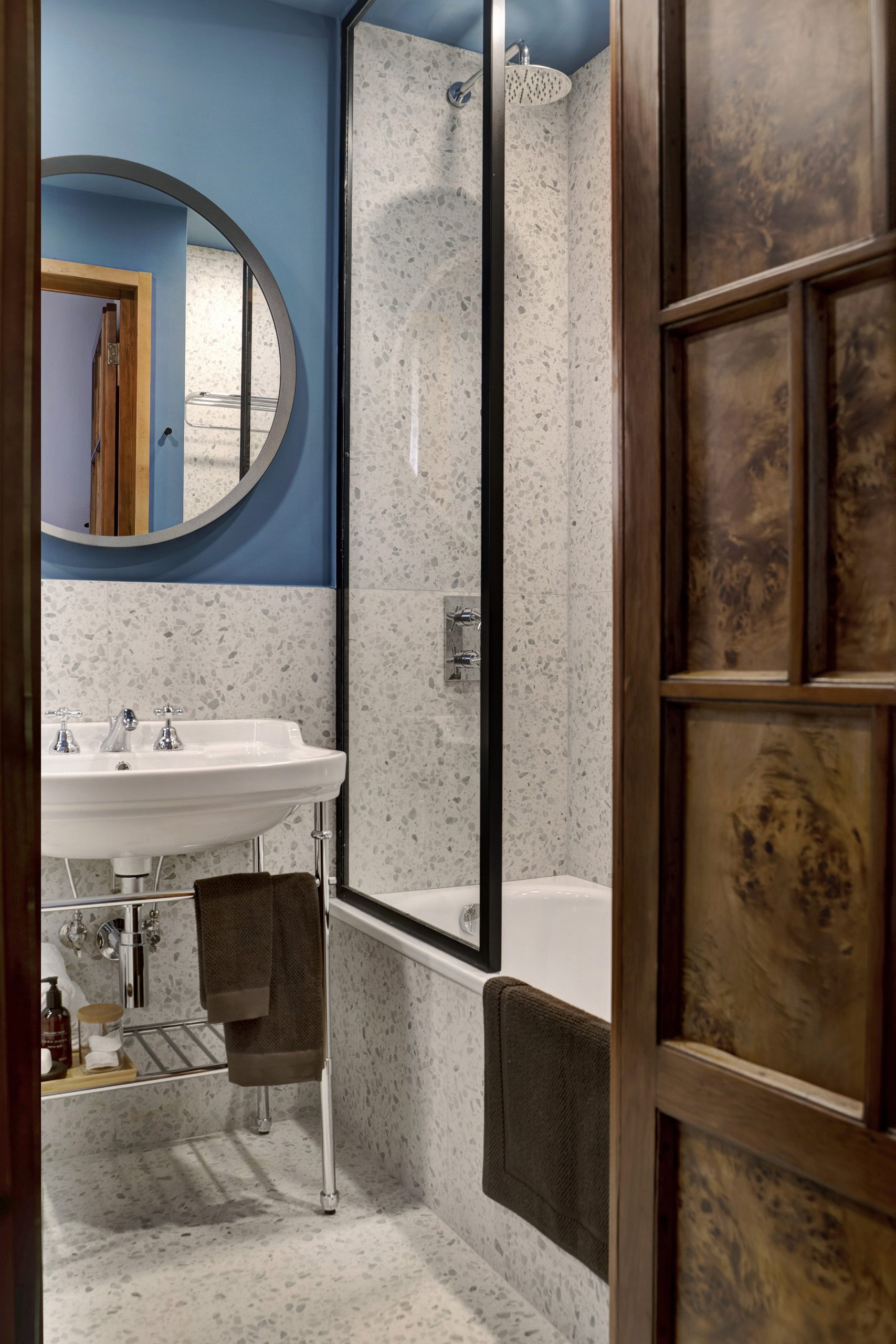 Other homes in the historic city of Rome include a cosy apartment by Studio Strato, which has its own reading nook and an industrial-feel flat by architect Alessandro Tomei that boasts exposed concrete surfaces and iron-framed glass partitions.

Photography is by Michele Bonechi.