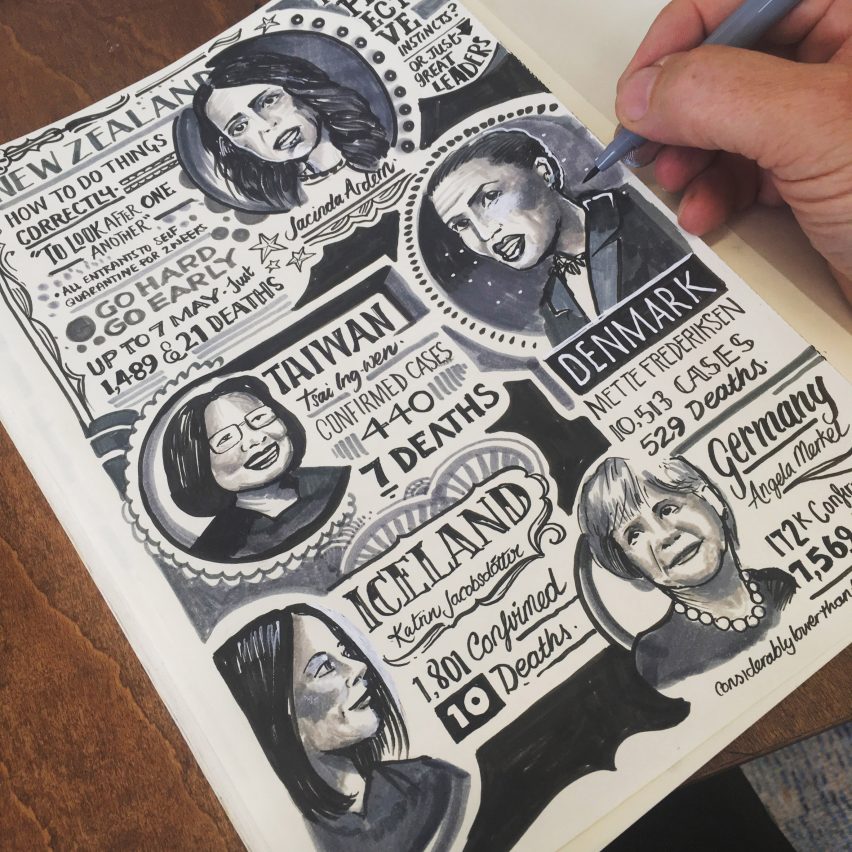 London illustrator Vic Lee has documented his experience of the coronavirus pandemic in a graphic diary, which ended up selling thousands of copies after he shared it online.

Lee’s self-published Corona Diary illustrates his lockdown experience, and documents global and national events during the first six months of the coronavirus pandemic.

While the illustrator’s recent works have been large-scale, hand-drawn murals, he created the smaller-scale book as a way of handling life during lockdown.

“The diary was initially a personal project,” Lee told Dezeen. “I read a lot of dystopian novels, so the old imagination just started flying into end-of-times scenarios.” 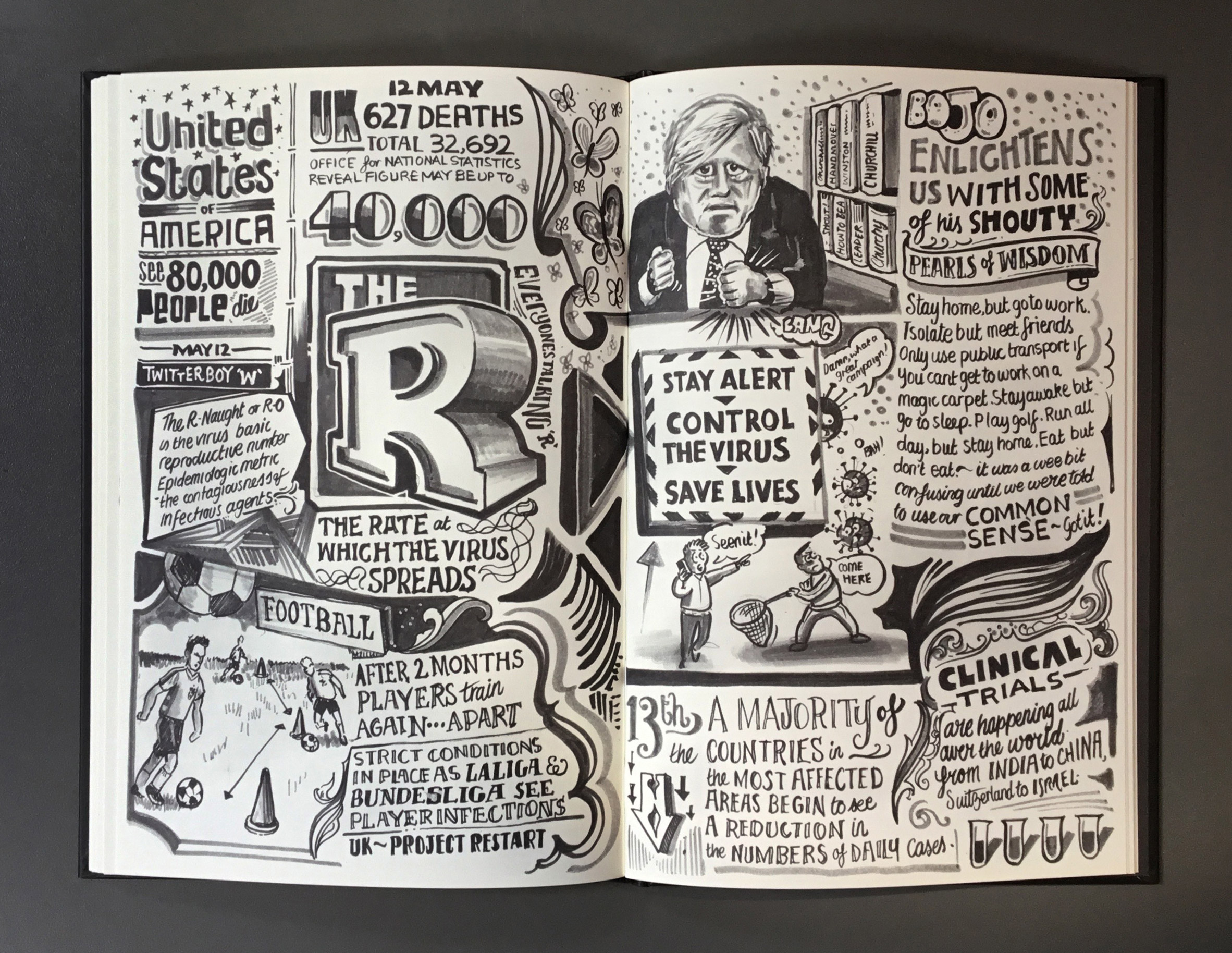 “It completely threw me, but as I had no work, and the government gave me nothing as most creatives got, it felt like I needed to focus my energies and keep my mind busy,” he added.

The project is an extension of Lee’s normal process of creating illustrated diaries when travelling, in order to record the experience. Corona Diary is completed in the same style and is “heavily illustrated, full of stories to lose yourself in,” Lee explained.

“My normal artist life is doing vast hand-penned murals, very Victoriana meets modern charm and wit,” he said. “I think the book is a much more raw version, from the heart.”

“Nothing in the book has been adapted or cleaned. There’s typos in there, pencil marks. I wanted it to be as genuine as the original,” he continued. 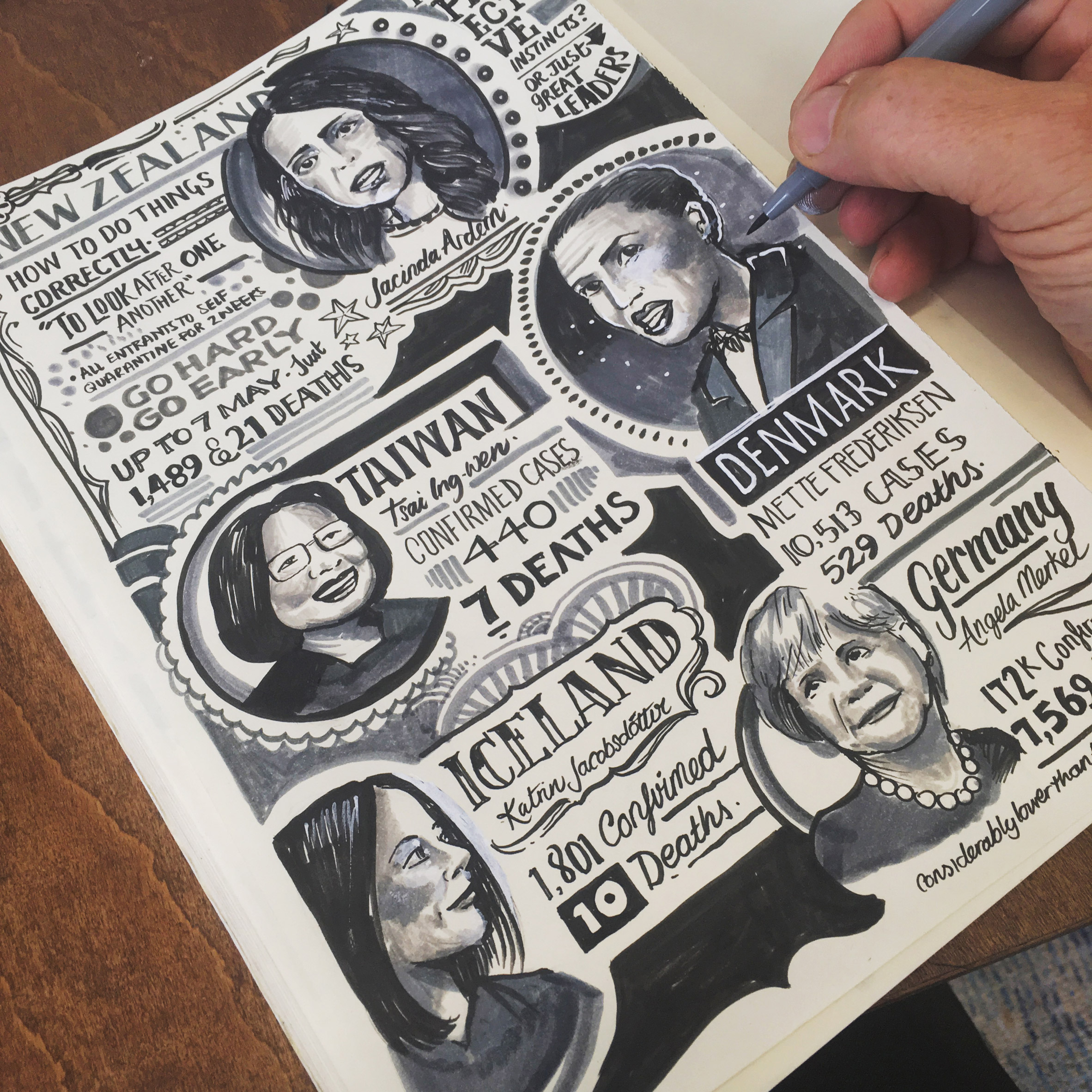 Lee said the project became almost therapeutic in helping him to understand what was going on around him as the pandemic unfolded.

“Illustrating the book, I researched much more than I would normally doing a personal project, and there were many low points when looking at the way the government handled things so appallingly,” Lee said.

“It was shocking to see how little command, understanding or empathy they showed and still do.” 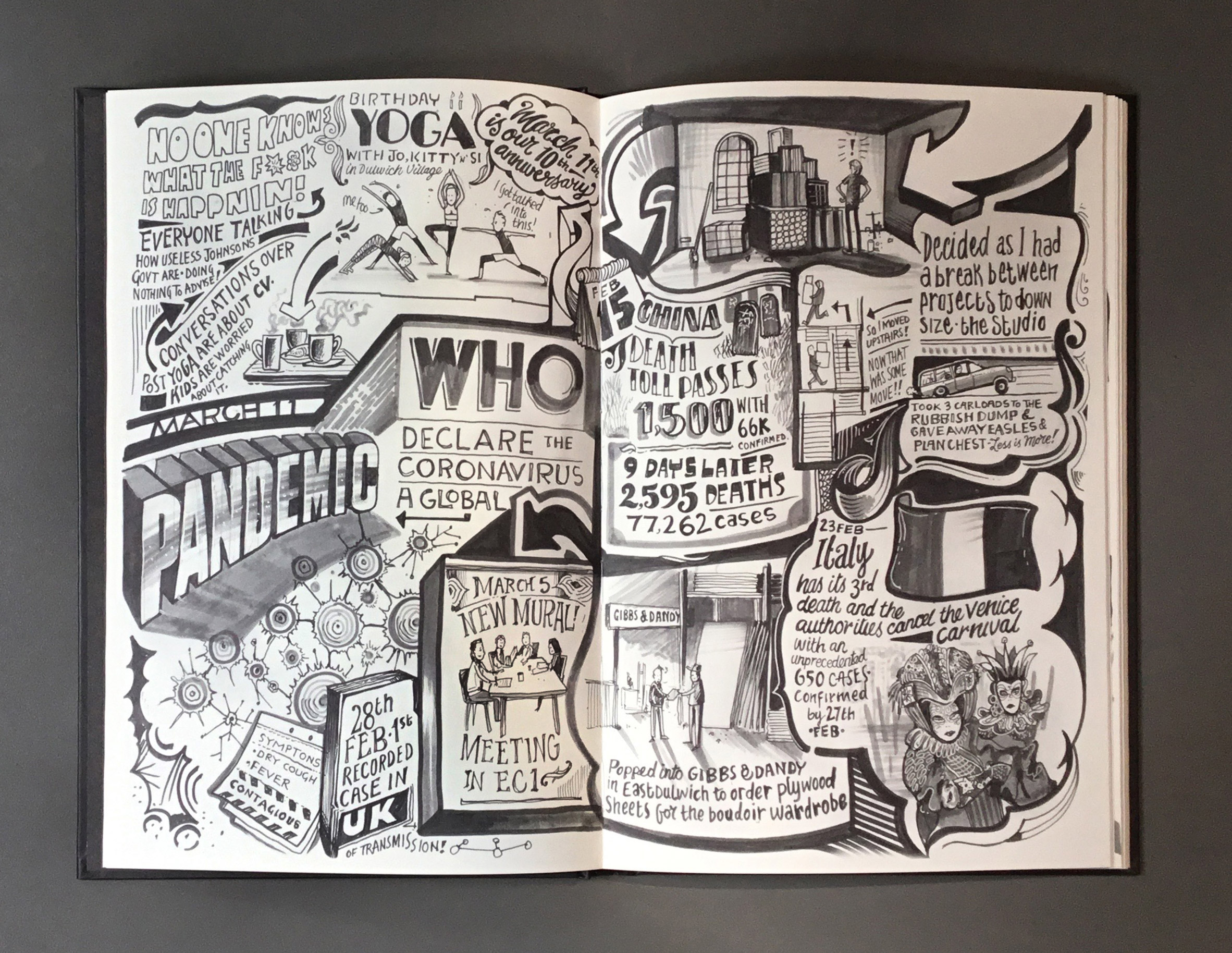 The diary also helped him visualise aspects of the crisis in a way that statistics aren’t always able to. “There’s a piece in the book I had to put to get into context the amount of fatalities per day in the UK,” he said.

“My street of hundreds of houses, with everyone gone. We read about deaths like it was just numbers, but these people left many more people grieving. There were a few tears shed on some pages.” 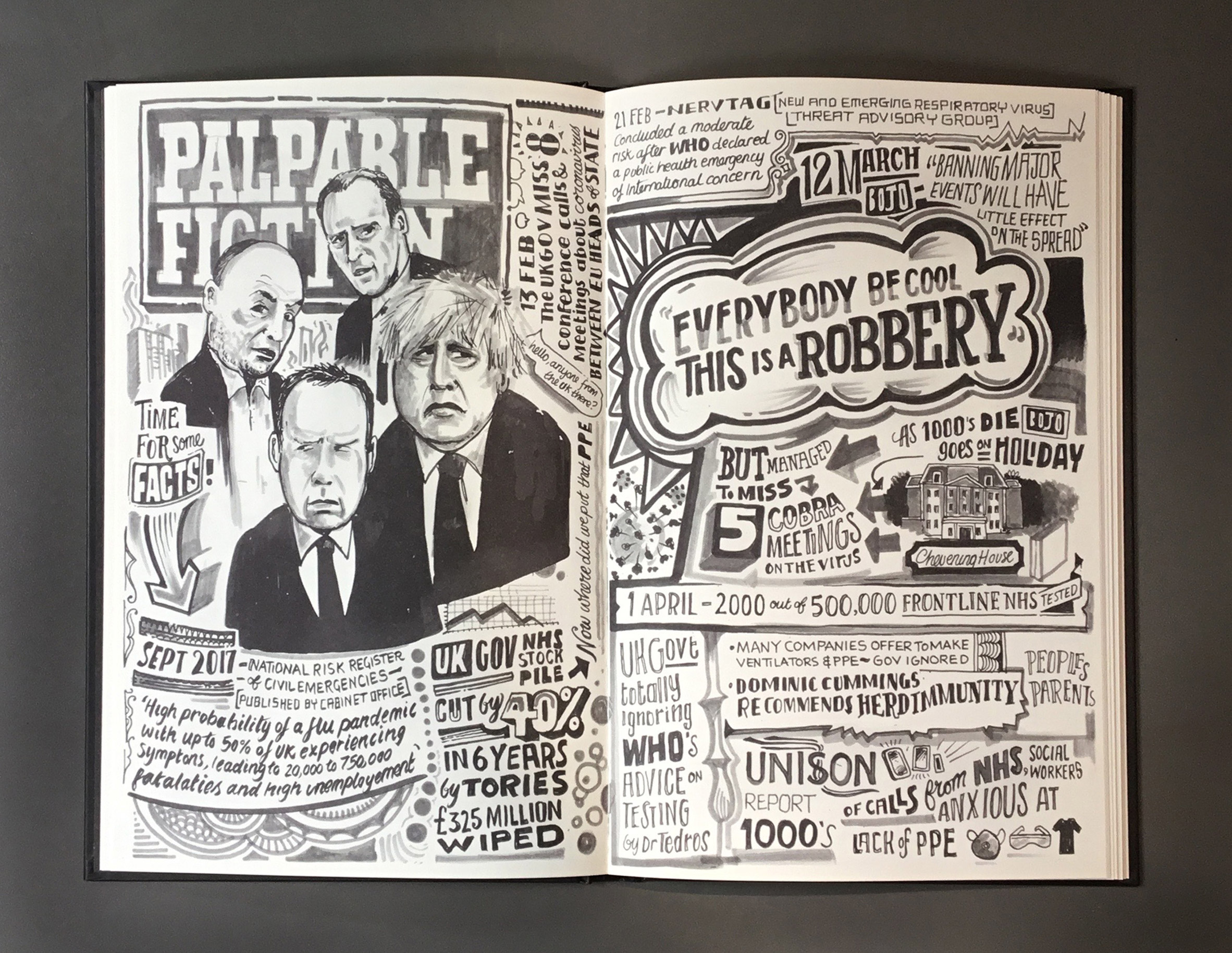 After completing Corona Diary, the artist shared a snippet of the book online and ended up selling 2,500 copies in seven weeks.

“The moment this changed from a personal journal to a printed book was when I put up a short 30 second film onto LinkedIn,” Lee said.

“Just sharing my goings on as I do with all my work, I think it was sometime in March. It sort of blew up – it was viewed 250,000 times, with over 12,000 likes and thousands of comments telling me to publish it as a book.”

Lee is now looking for a publisher for the Corona Diary, which he believes has a large target audience. “My demographic is anyone who has experienced the Corona pandemic,” the illustrator said.

“It’s the entire planet! I have mums, grandfathers, kids, builders, drivers, design creatives, cleaners, people from every walk of life, every demographic and culture buying this book.” 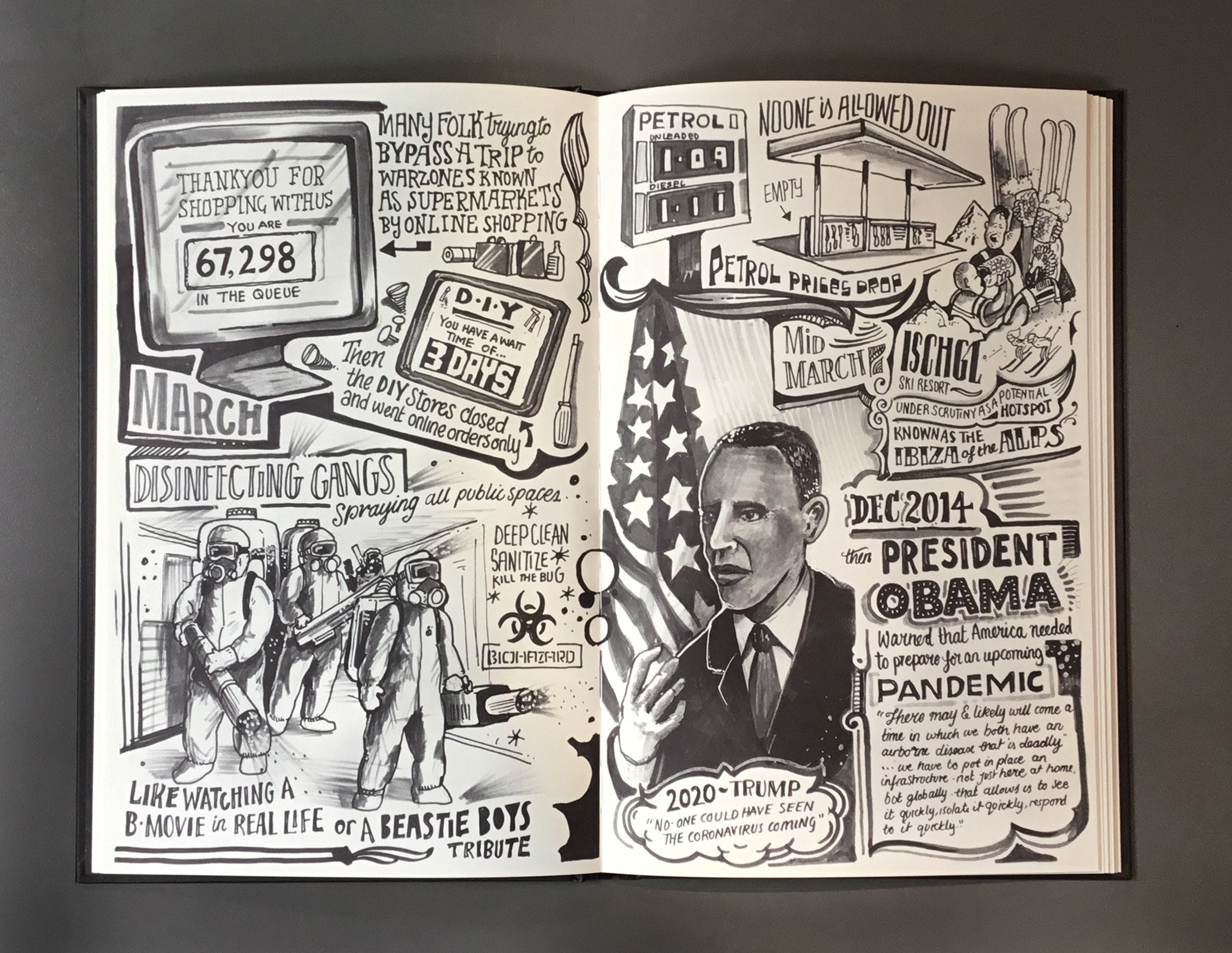 Lee, who lives in Peckham, has also gifted a number of copies of Corona Diary to local key workers he developed a relationship with during lockdown.

“When the lockdown was about to happen, I chatted to the girls in my local Sainsbury’s, the delivery drivers, posties, refuse collectors, all working through,” he said. “The backbone of our communities. I wanted to say thank you to the ones I met and chatted to, so I gifted books to as many as I could.”

A number of creatives and designers have used the time afforded to them by lockdown to create new work, including EcoLogicStudio, which designed a DIY algae kit for children, and Camille Benoit and Mariana Gella who created architectural models of imaginary cities.