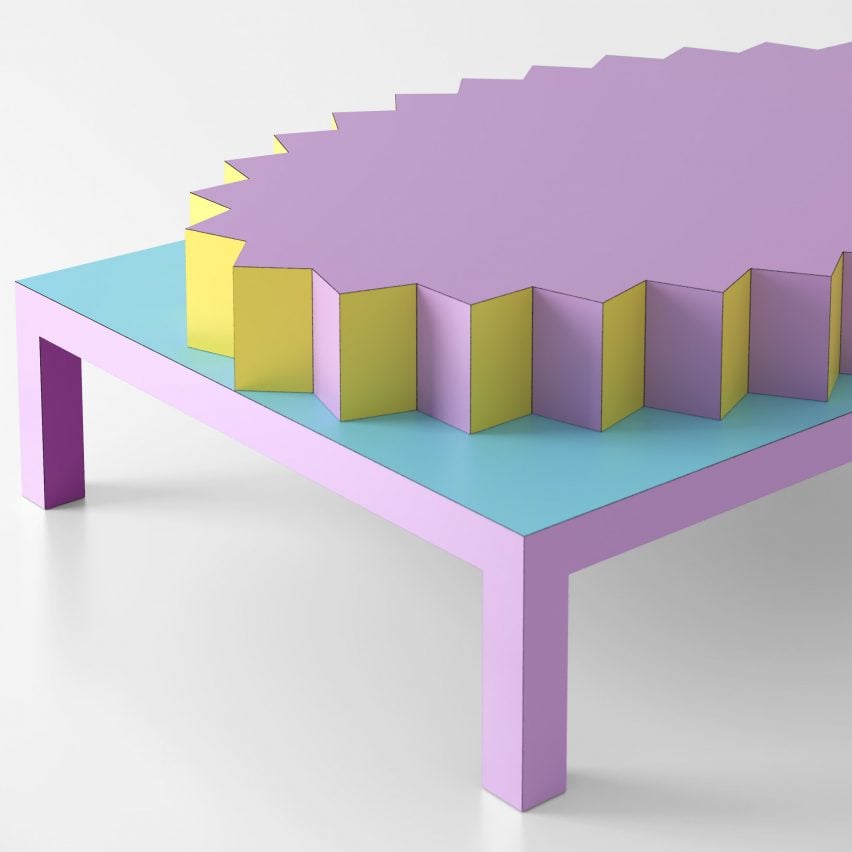 The limited collection saw De Rosso task five designers with reinterpreting objects from the company’s archive, or updating pieces that already existed but hadn’t been published up until now.

Joining Furman, Hutten and Navone is Italian artist Ugo Nespolo and French designer Martine Bedin, who was a founding member of the Memphis Group in the 1980s.

Each of the designs have been brought to life as renders before they are produced as one-off pieces.

Together, the five creatives designed a bookcase, two chairs, two tables and two sideboards, each reflecting the personal style of their creator, but united by the same “exuberant use of colour”.

This is in keeping with De Rosso’s design language, which the company describes as a crossover of pop art, the Alchimia movement and the Memphis movement.

“The main aim was to celebrate the heritage and flair of the company while also adding the right design and designers to blend and continue it in the future,” said company consultant Massimo De Conti.

Made in collaboration with laminate brand Abet Laminati, each of the limited edition furniture items is made from high-pressure decorative laminate, with the exception of the bookcase by Bedin, which also incorporates Belgian black marble.

Bedin’s Slate bookcase is constructed from pieces of laminate that have been made into cubic boxes and stacked on top of each other, with longer sections of the material being used to form shelves and a base.

While some of the boxes have been printed with bold, block colours, others feature animated patterns resembling marbling-ink effects.

Furman designed the Chomp chair and the Lounge Hog coffee table for De Rosso, which both boast “zoomorphic” shapes and bright hues of pink, green, yellow, orange, purple and blue.

With a backrest and seat made up of two sections of laminate that have been cut along one edge to resemble sharp teeth, the Chomp chair playfully imitates a fictional monster that is “ready to bite whoever sits down”.

The Lounge Hog table, on the other hand, is modelled after a hedgehog, with a tabletop shaped like the round, spiky body of the animal.

Dutch designer Hutten was responsible for redesigning the S.E.C. chair, introducing new patterns and colours to the archival item.

The chair is made out of a single cubic form that has had another square cut out of its top to create a seat. This is covered with a striped laminate featuring gradiated colours of brown, orange, yellow and blue.

This design has been created in five different “kaleidoscopic” colourways.

Italian designer Navone created two “ironic” sideboards, titled Watermelon and Meraviglia, the latter of which is a brand new design, while the other is a reinterpretation of an archival piece.

One of the objects looks just as its name indicates, with bright rouge-tinted cupboards dotted with black seed-like shapes, and green-hued sides and top surface striped with a darker shade of the same colour.

The other furniture piece boasts more pared-back colours of silver and pale blue, and has doors that are punctuated with rows of uniform holes.

Italian artist Nespolo created a brand new design for De Rosso – the Febo table, which has a simple structure but is printed with loud “pop graphics” featuring geometric shapes and miscellaneous objects like trumpets, locks, pens and cacti.

Each piece is a collectors item designed for the domestic environment, and can be placed on its own or in a group to create “an exhilarating presence” in the home.

At Dezeen’s Virtual Design Festival, the designer coined the term “New London Fabulous” to describe the movement of designers, including himself, who have overcome the bias against using colour, pattern and ornament.