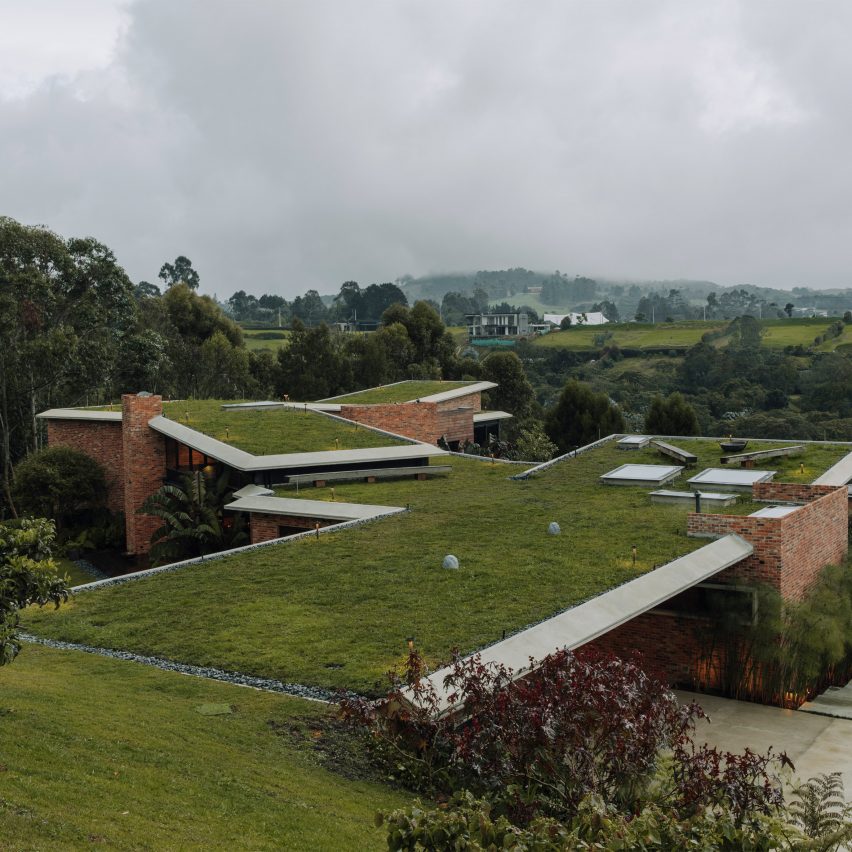 Architecture studio OA+ has threaded a path through this adobe brick and wood house in Envigado, Colombia that leads from its entrance to woodland at the rear.

Extending from a grassy hill on the site, the green roofs staggered over the residence are intended to blend it in with its surrounding in the neighbourhood of Alto de las Palmas, which translates as top of the palms. 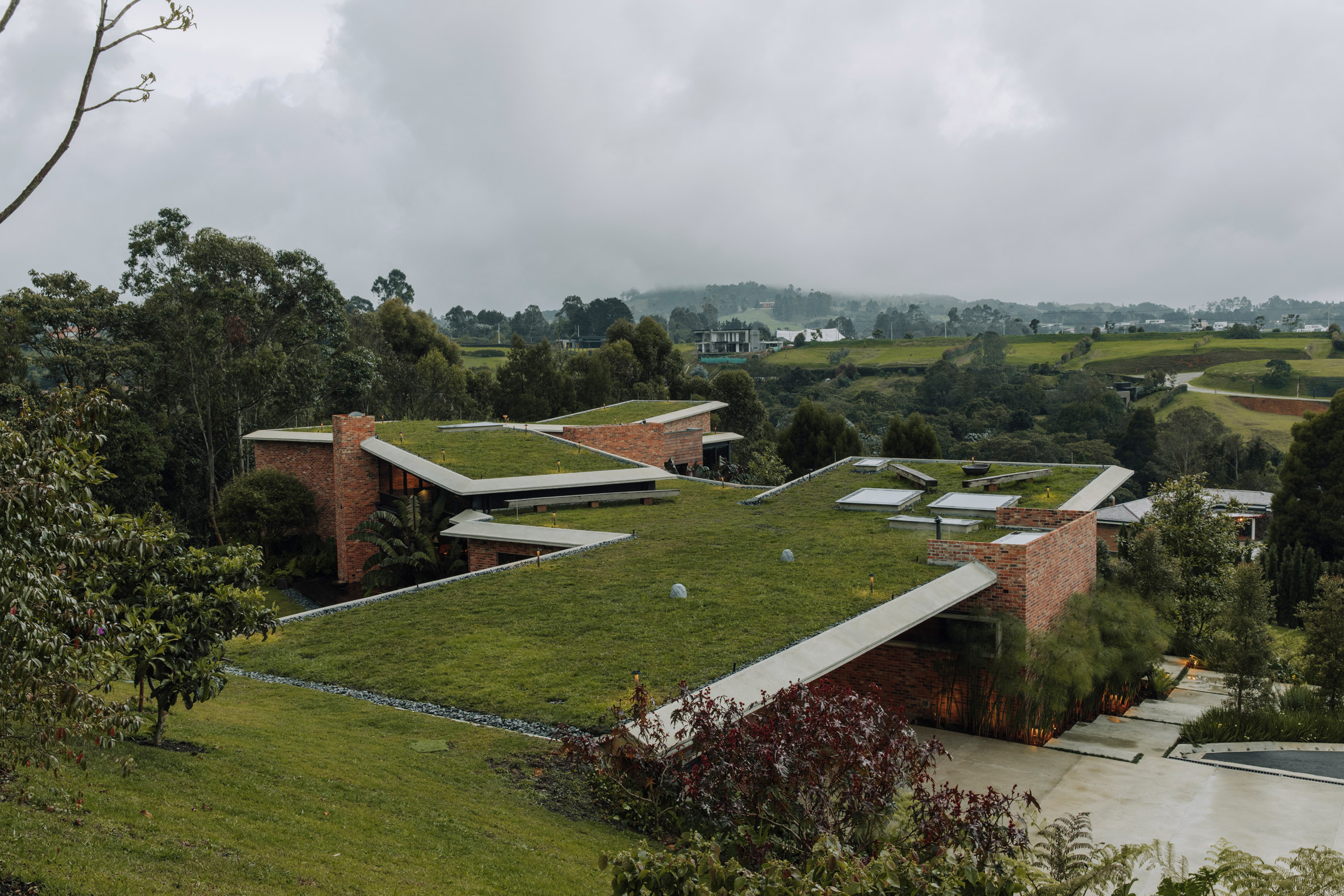 “Casa Carmen protrudes from the mountain, requiring the need to make an impact with its surroundings by means of a habitable green roof, which extends throughout the project and over all spaces of the house,” said OA+, which is based in Medellín. Alto de las Palmas is located in Envigado, a municipality southeast of Medellin that is 2,550 metres above sea level.

Because of its high altitude, the house is fragmented into three volumes laid in a Z-shape through the site, in order to create sheltered gardens and terraces. 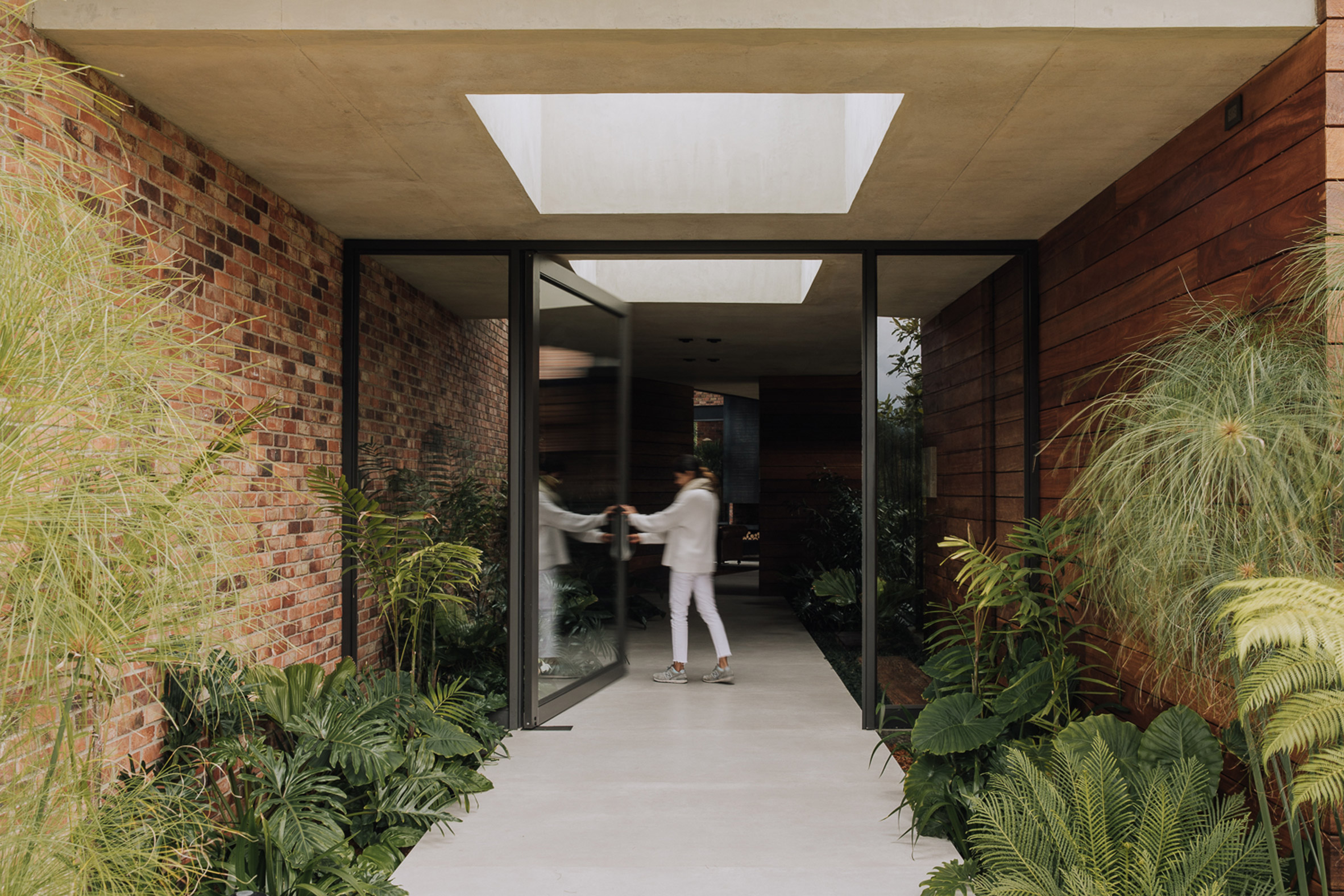 “The high altitude of the location, subject to adverse climatic conditions in terms of temperature and wind demanded the project adopt principles of architectural composition to improve the comfort and bioclimatic conditions of the house,” the firm added. 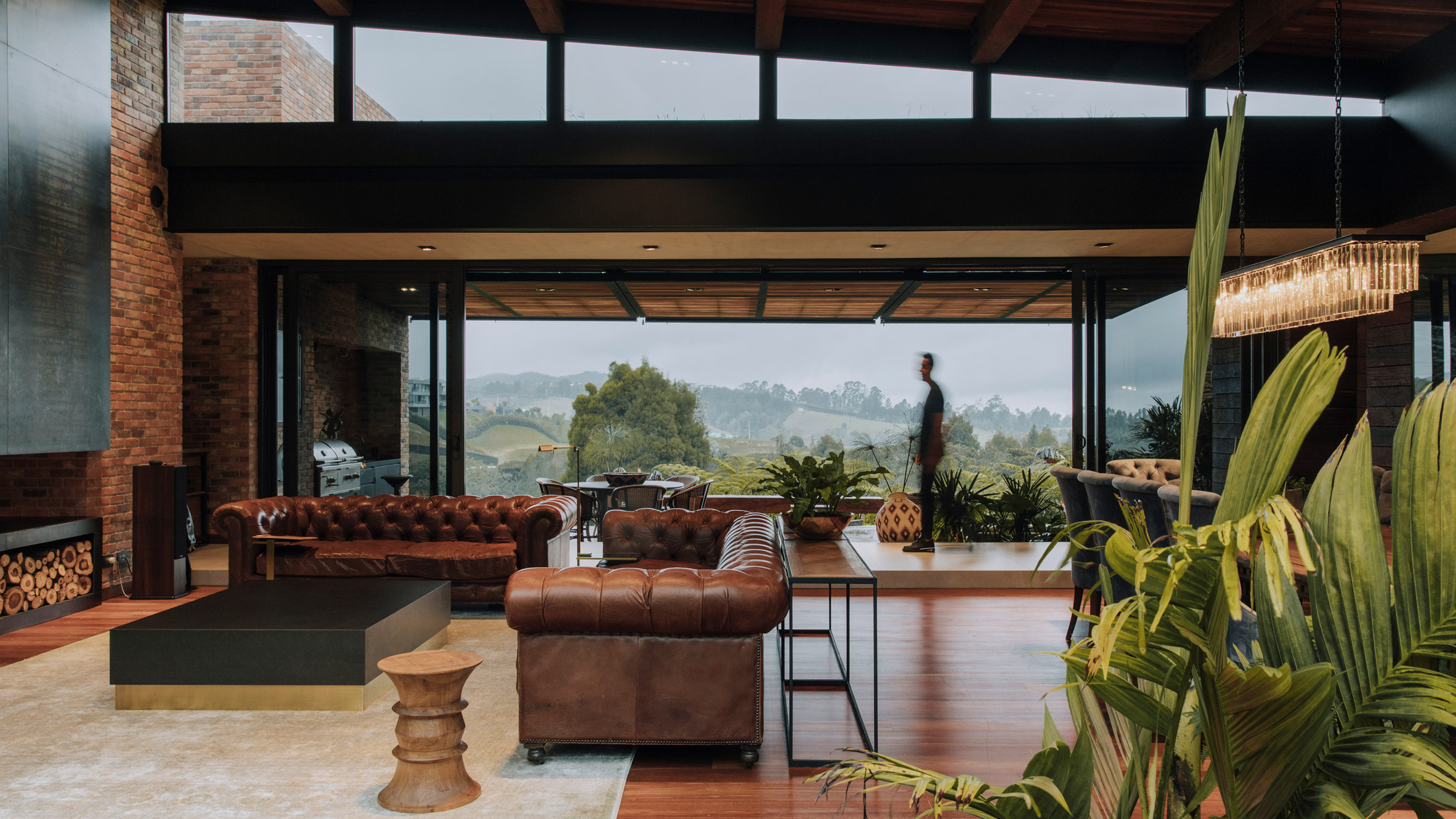 The programme is fragmented into three areas across the 650-square-metre property, which is mainly arranged on the ground floor.

They are threaded with a pathway that leads from the entrance to the forest at the rear to merge the house with nearby nature trails. “From the point of access, the aim was to generate a route that continues and flows through the family room until reaching the forest,” OA+ explained.

“The private spaces lead to the nearby nature reserve characterised by a dense stand of native trees and small natural stream that descends from the mountain.” 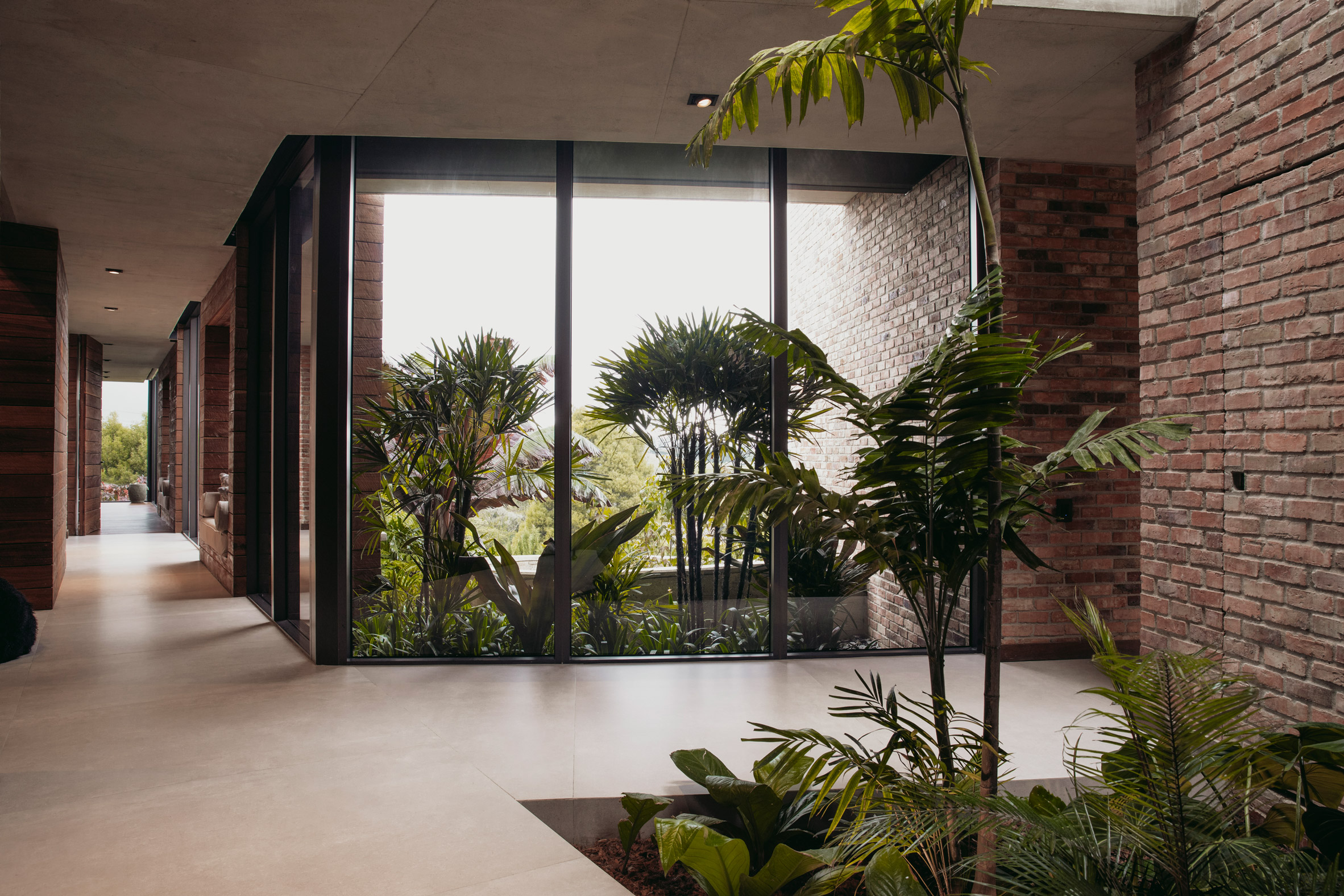 The walkway starts as large stepping stones and then cuts between an open-plan kitchen, lounge and dining room in the middle volume and a south-east facing deck with a dining table and jacuzzi.

It ends outside the bedroom volume, which contains three rooms with en-suite bathrooms, walk-in closets and north-facing terraces. A reddish abobe clay brick is predominantly used to create the walls of the volumes, with a number of smaller blocks clad in wood boards. These materials, along with concrete flooring, were chosen because of the way they would weather over time.

“Wood, clay adobe, and concrete are proposed to achieve the beauty of their natural properties in the long-term, taking into account that these materials stand the test of time allowing one to witness the project age and adapt to the landscape over generations,” the studio said. 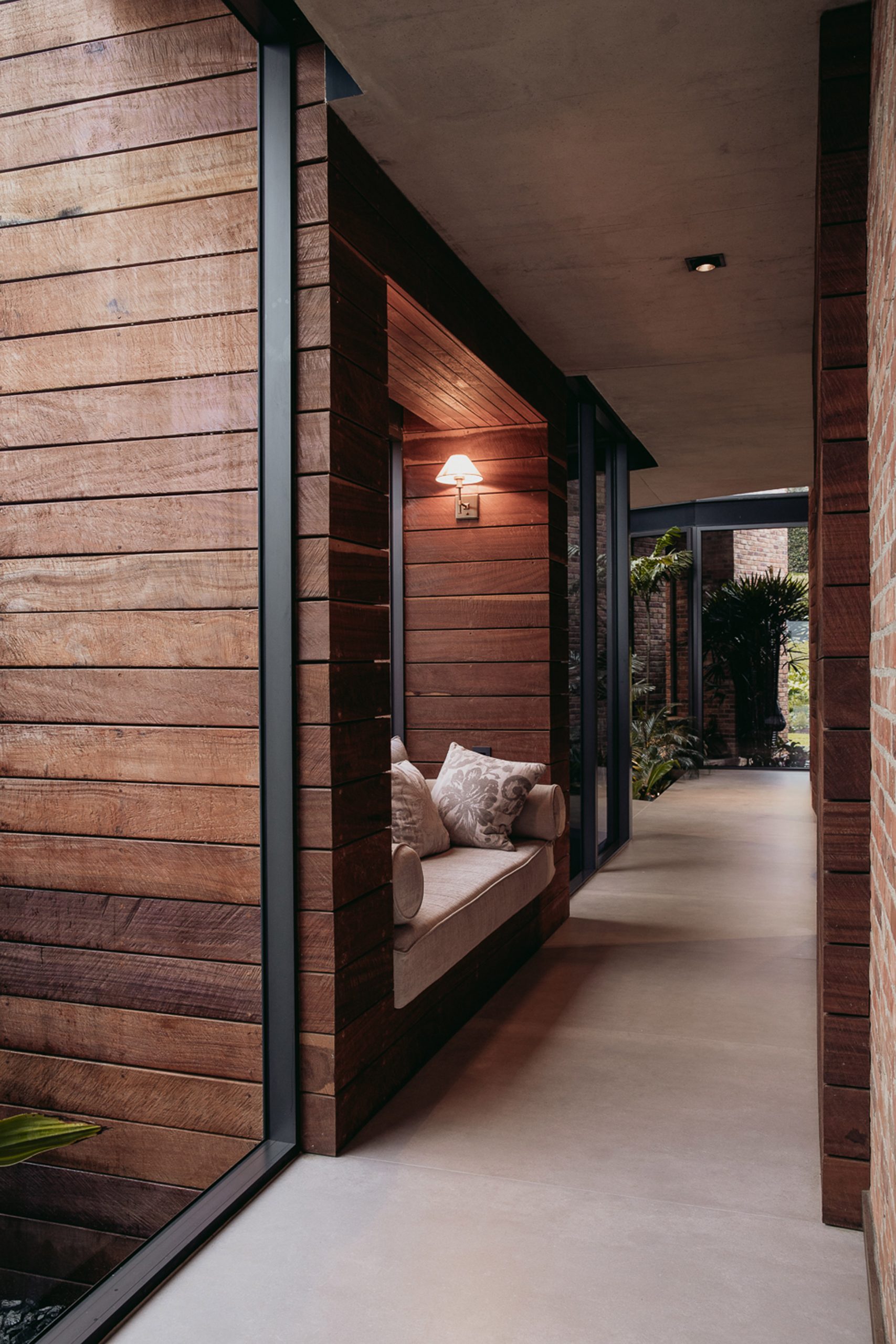 Similar materials are also used throughout the interiors of the house, giving a warm feel and rustic aesthetic. Large expanses of glazing provide views of the surrounding grassy hills, while clerestory windows and rooflights offer additional natural light.

Casa Carmen also has a basement containing a laundry room, spa zone and a gym.

Other residential projects designed to respond to the landscape in Colombia is a tiny black cabin overlooking the Andes mountains, which architect Alfonso Arango built next to his childhood home.

Photography is by Mateo Soto.