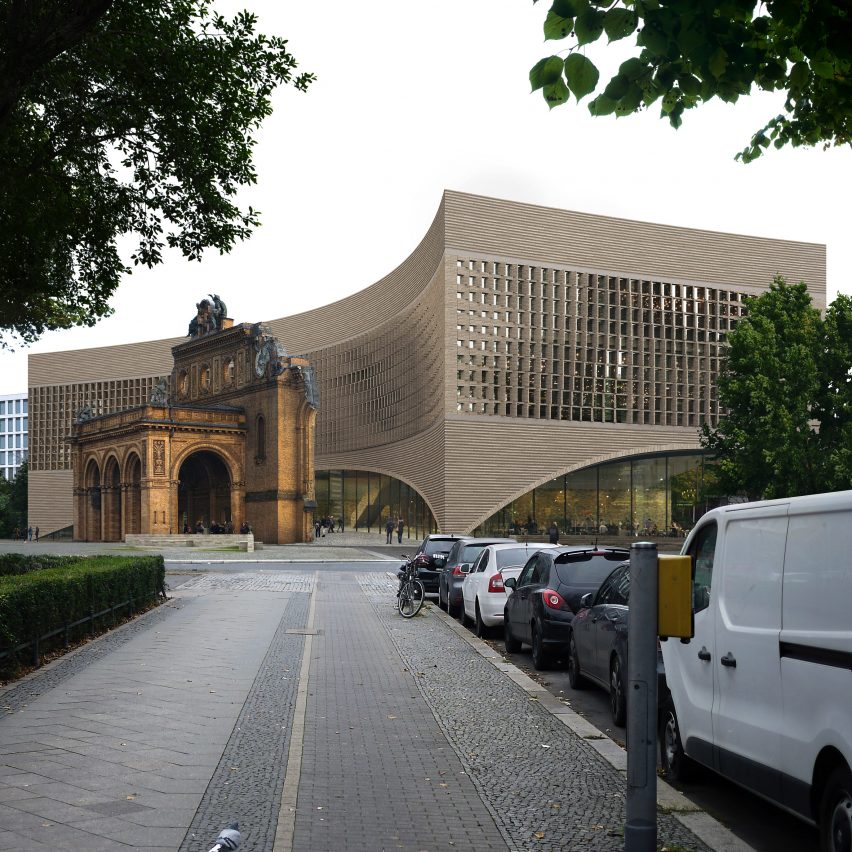 Dorte Mandrup has revealed visuals of a museum in Berlin that will create a backdrop to the ruins of Anhalter Bahnhof station and tell stories of the people who fled the Nazi regime.

Slated for completion in 2025, the Exilmuseum Berlin will be built on the Askanischer Platz and will spotlight present-day experiences of displacement.

Dorte Mandrup‘s design has a simple, curved form and is intended to highlight the position of the former Anhalter Bahnhof railway station, from where hundreds of people fled in exile during World War II before it was largely destroyed by bombing in 1943.

The station’s ruins, which have since become an important monument, will be kept intact and become the focal point of the museum’s entrance behind it.

Museum will be “minimal yet forceful gesture”

“It is fantastic to be part of creating a place where the understanding of exile is being illuminated,” the studio’s founder, Dorte Mandrup, told Dezeen.

“It has never been more pressing than today where more than 65 million people are driven into exile,” she continued. “The museum will be a memorial of the past and a vehicle for future awareness and solidarity.” 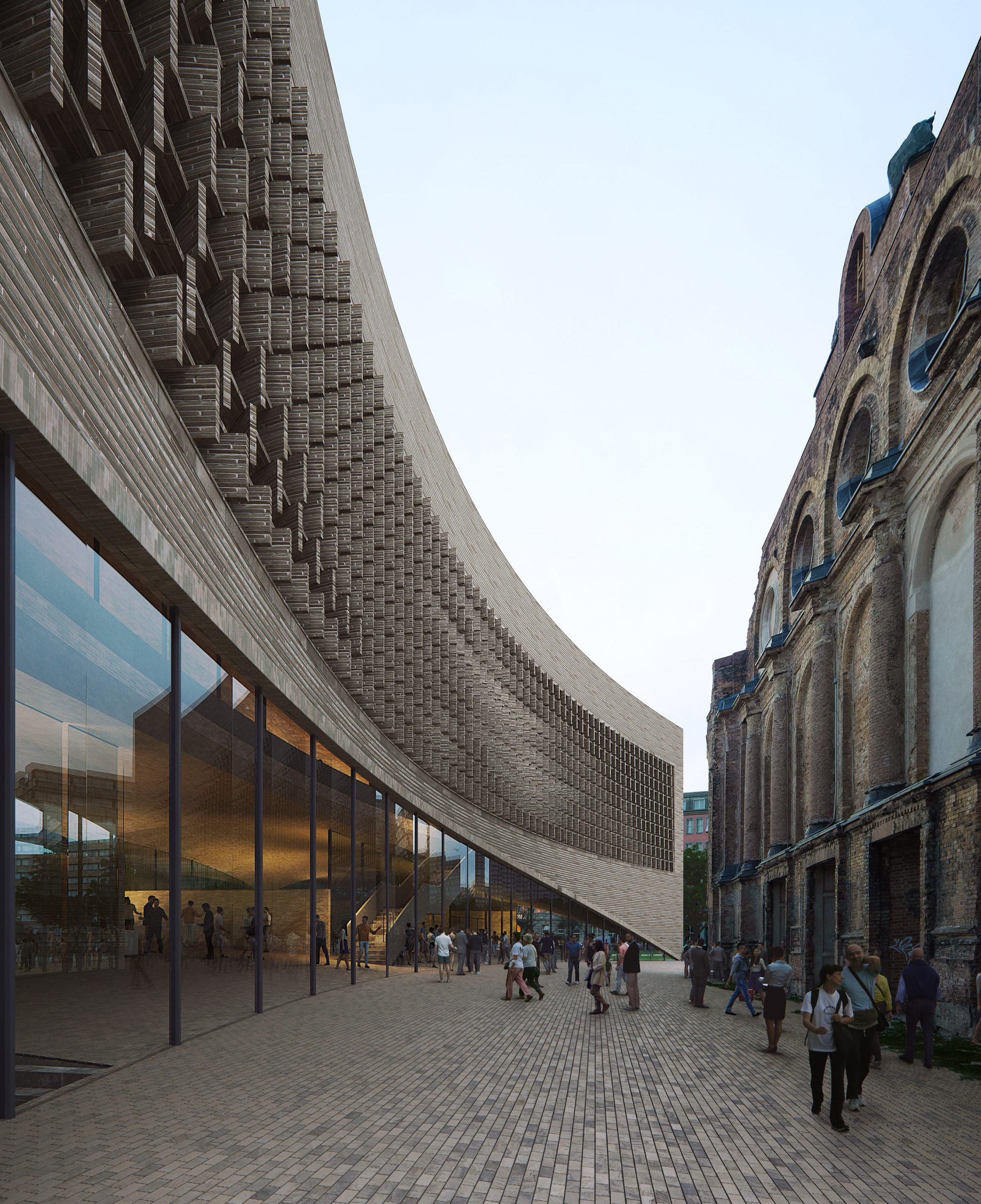 “Our concept is a minimal, but forceful gesture – a single curve that marks the position of the former Anhalter Bahnhof and creates a void that bridges the past and present,” added Mandrup.

Once complete, the curved facade of the 6,300-square-metre Exilmuseum Berlin will be punctured by wide arches that rise up from the base of each elevation.

Lined with glazing, these will mark the entrances to the museum and also frame views inside.

Yellow bricks will be used across the facade to mimic those used to build Anhalter Bahnhof, which the studio hopes will appear as though they were salvaged from demolition.

At the centre of each elevation, the bricks will be arranged to form rows of small tilted panels that have glazed areas behind, reflecting spots of light onto the interior walls and evoking a flickering image from a film projector.

“We imagine that the millions of yellow bricks that used to cover the site after the demolition of Anhalter Bahnhof have now been transformed into a softly curved arch form,” explained Mandrup.

“The differently tilted bricks make the facade appear like a flickering image – as a subtle reminder that more than just a building was lost in this place.”

Station ruins will be framed by museum entrance

Inside, Exilmuseum Berlin will comprise three storeys above ground and a basement level. There will also be a green roof, hidden behind brick parapets.

The primary facade and entrance will be on the north side, facing onto the Askanischer Platz and marked by the ruins of the former train station.

Here, visitors will enter through the curved opening where they will be greeted by a three-storey foyer lined with a cobbled floor that acts as a continuation of the plaza. 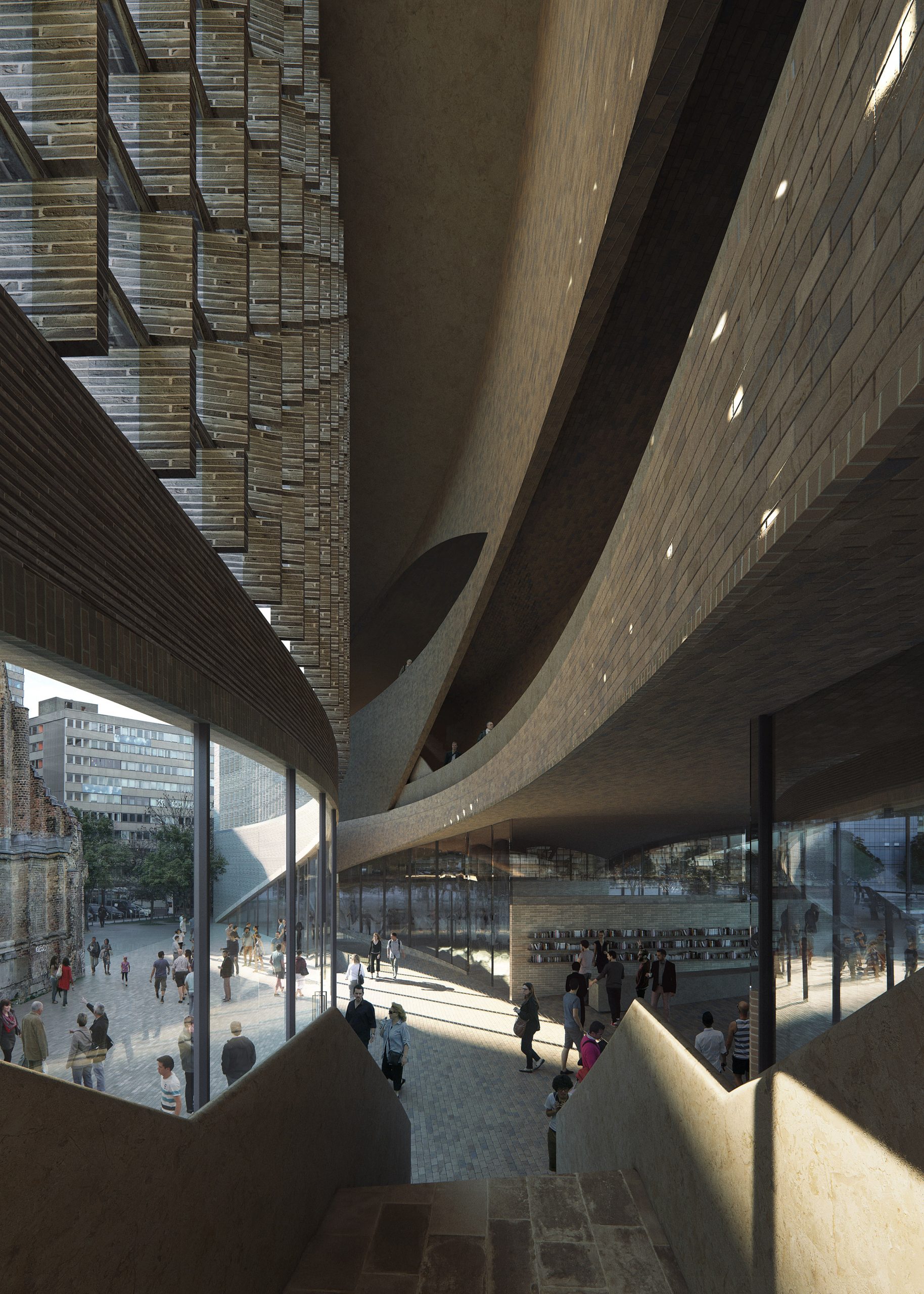 The foyer will house all the circulation for the building to create easy access to all functions, which will include a mix of permanent and temporary exhibitions, alongside education facilities and a restaurant.

“When entering the northern curved facade, visitors step into a dramatic three-story void, a foyer that facilitates the vertical and horizontal circulation,” said Mandrup.

“Here the cobblestone paving at Askanischer Platz is continued, creating one continuous surface where inside and outside are only divided by a glass wall.”

Exhibitions will be “media-intensive”

The exhibitions will be “media-intensive” rather than displays of material objects, which the studio hope will offer a more immersive experience.

Their focus will be primarily on Germany in the years between 1933 and 1945, but will also spotlight the present in an attempt to “bridge the gap between the Nazi-era exile and exile in our own times”.

Dorte Mandrup’s proposal for the Exilmuseum Berlin was the winning entry to an international competition for the museum that was initiated in November 2019. The studio’s design was developed with the support of Höhler & Partner, Topotek1 and Buro Happold.

All the entries for the competition, which included designs by SANAA, Diller Scofidio + Renfro, Kéré Architecture and Caruso St John Architect, will be on show in an exhibition at Berlin State Library later this year.

Dorte Mandrup is the eponymous studio of Danish architect Mandrup, which she founded in 1999 in Copenhagen, Denmark.

Other recent projects by the studio include proposals for the tallest tower in western Europe and an Arctic whale watching facility in Norway that will “grow out of the landscape”.

Visuals are by Mir.