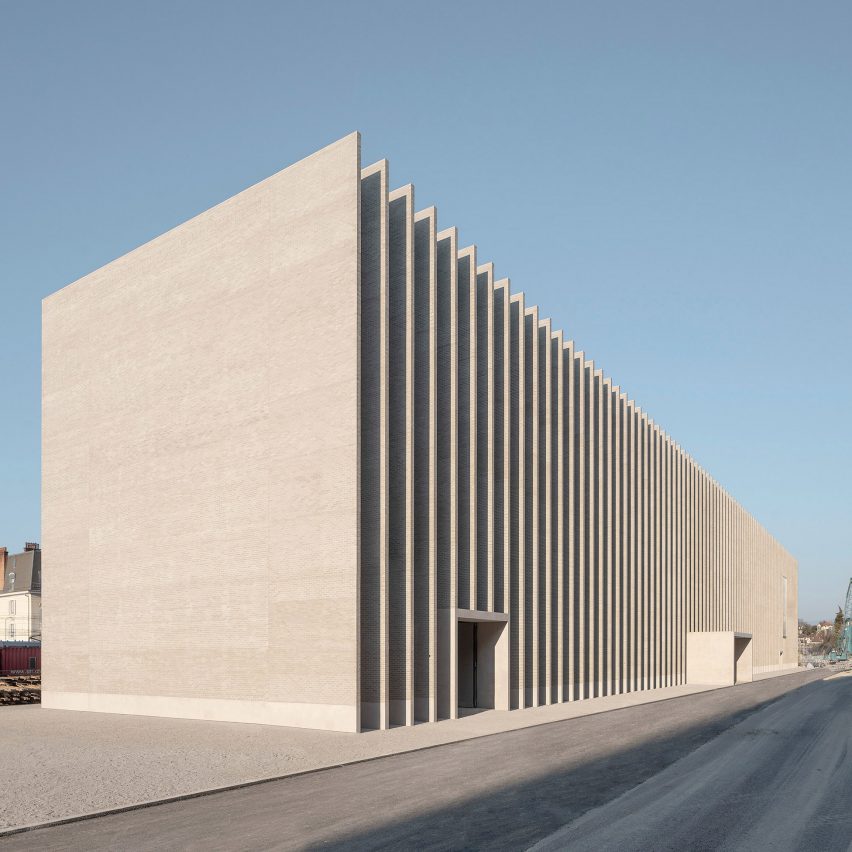 The studio won an international competition to design both art museum the Musée cantonal des Beaux-Arts Lausanne (MCBA) and the masterplan for the city’s new art district, where the museum is located, in 2011.

“Since the beginning we have been thinking about a design for the new art district to be not just a detached entity in the city but also as a trigger project for the redevelopment of the abandoned area by the railways,” Barozzi Veiga co-founder Fabrizio Barozzi told Dezeen.

“Our approach pursued the intention to transform and give back to the city that central large urban space that at, that time, was unused and fragmented.”

Musée cantonal des Beaux-Arts Lausanne, which holds more than 10,000 works of art, was built on the site’s southern edge, parallel to the train tracks. The 145-metre-long building features a distinctive ridged facade that is meant to reference its industrial surroundings.

“The project carries and expresses the memory of the site, echoing the former industrial condition with pragmatic forms, rigorous geometry and hard, sharp lines,” the studio said.

A 19th-century train hall previously located in the space was demolished, but Barozzi Veiga preserved its arched window for the art museum – which is longlisted in the cultural building category for Dezeen Awards 2020.

“The old arched window becomes the main protagonist of the building façade from the railway and, once within the foyer, it reveals its full role as a substantial structuring component of the new building’s sequence of spaces,” Barozzi said.

The building is “relatively hermetic” in order to protect the museum’s collections. An almost closed facade faces the train tracks to the south while opening up more towards the northern side, where there is a new public plaza.

“We decided to implement a brick facades which could offer a texture, a vibrant pattern to the blind monolithic elevation and, simultaneously, it could evoke the industrial history of the site,” Barozzi explained.

“On the square, the vertical blinds’ rhythm breaks the massiveness of the monolith and reveal the openings,” he added. “At night, these brick blinds serve as a canvas to diffuse the interior light coming from the museum.”

Inside, the studio used terrazzo for the floors and plaster for the walls, both in a light grey hue, with the ground floor functioning as an extension of the public space outside. The upper levels, which house the exhibitions, have been given wooden floors.

Barozzi Veiga aimed to reach “the highest sustainability standards” when constructing the building. The architect said it “follows the Swiss label Minergie ECO, the SMEO procedure and the grey energy calculation, according to The Swiss Society of Engineers and Architects (SIA) 2023″.

“The compactness of the form, the use of natural light to light up the interiors and the high flexibility of the spaces, which allows for different public events to take place within the walls of the museum, are among the essential architectural features that contribute to make the MCBA a sustainable building,” Barozzi added.

Both museums will be housed in one building designed by Aires Mateus, which won a 2015 competition.

Photography is by Simon Menges, unless stated otherwise.