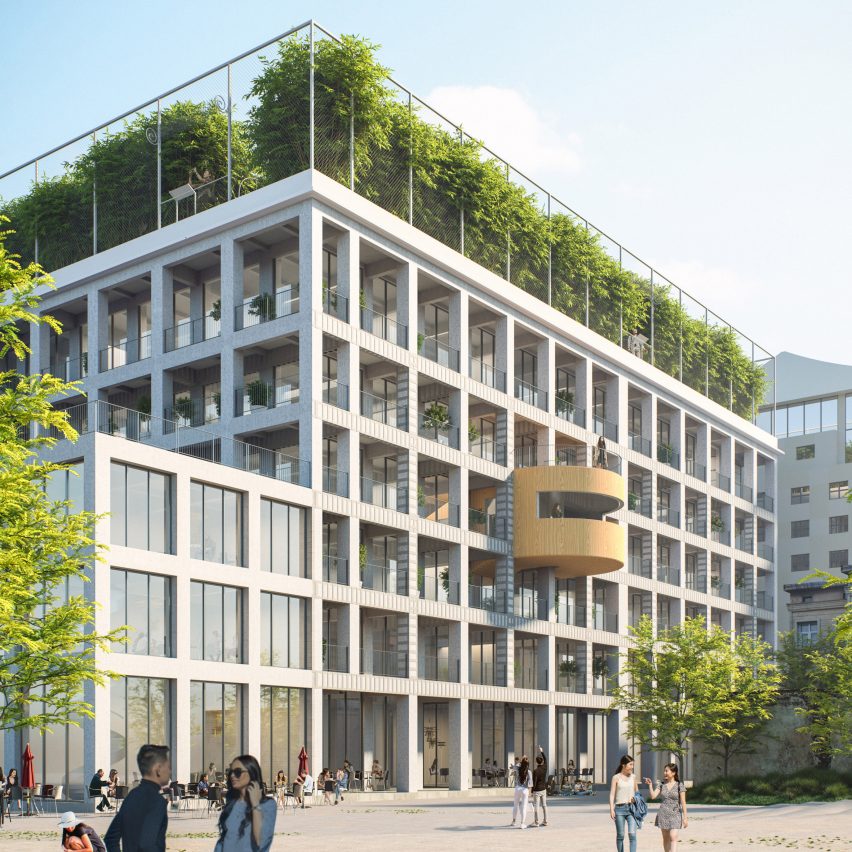 Dutch architecture firm MVRDV has announced its plans to renovate a deteriorating concrete building in Shenzhen, China, to create the If Factory offices and a maze-like roof garden.

Located in the historic district of Nantou, the 11,000-square-metre disused factory will be transformed into rentable workspaces for creative companies and a home for the Urban Research Institute of property developer Vanke.

Rather than demolishing the factory, MVRDV‘s priority for the scheme is to preserve its history by restoring its original concrete frame, which has become exposed as the building has deteriorated.

The studio will then reconfigure its interior layout and insert a giant central staircase, before adding a rooftop garden called The Green House.

Once complete, If Factory will be enveloped by the original building’s existing grid-like frame, which will be treated to resist ageing and punctured by large windows.

“This preserves the traces of the building’s history, keeping the concrete frame that is now exposed due to the building’s dilapidated state – in line with principles of sustainability and the circular economy,” explained the studio.

Inside, the office spaces will be set back from the concrete exterior to make space for balconies and circulation around the building’s perimeter.

This excludes the main staircase that MVRDV will build at the heart of the building to connect the ground floor to the rooftop.

Described by MVRDV as the “most notable new addition” to the building, the central staircase will protrude from the facade on the fourth floor and be clad in wood to contrast with the concrete-dominated material palette.

It will also be lined with windows that provide views into the office spaces and filled with neon signage to pay homage to Shenzhen.

“Windows built into the staircase provide glimpses into the work being done in the offices, ensuring that this creative hub acts with transparency and remains connected to the community life of Nantou,” explained MVRDV.

“Inside the staircase, mirrored glass and vibrant neon signage offer an aesthetic reminder of the early days of Shenzhen’s urbanisation.”

Another key part of the If Factory is The Green House, a rooftop garden that will be lined with greenery and bamboo arranged like a maze.

Nestled within the network of paths and hedges will be The Green Rooms, a series of spaces for visitors to relax that are each focused on a different activity – ranging from dancing and exercising to reading, dining and gathering.

An expected completion date is yet to be disclosed, but construction work has begun and a temporary canvas facade by MVRDV will remain in place until its opening.

This fabric facade is an image of “how the building will look once complete”, disrupted by a large zipper graphic that opens to a ground floor entrance where there is currently an exhibition. Following the building’s completion, the canvas will be recycled into tote bags.

According to MVRDV, If Factory forms a part of a wider masterplan and ambition to transform Nantou into a cultural and creative hub.

It also marks the second time MVRDV has carried out a project within the factory, following its Vertical Villages exhibit at the 2017 Bi-City Biennale of Urbanism and Architecture.

“Nantou is a special and fascinating place,” said MVRDV founding partner Winy Maas. “It’s really rewarding to return to this building after we exhibited here during the Shenzhen Biennale in 2017 with our ‘Vertical Villages’ and ideas for the future of cities,” he continued.

“Our proposal draws on that ambition to make this part of Shenzhen a creative force, but it also remains in touch with the people of Nantou, their needs, and the history of the place.”

If Factory was commissioned by the Shenzhen Nanshan District Bureau of Public Works and Chinese property developer Vanke. MVRDV has collaborated with the Urban Research Institute of Vanke, vaLue Design, and the Shenzhen Bowan Architecture Design Institute on its design.

It is one of a number of renovation projects proposed by Vanke in the city, which will all be developed by local and internationally renowned architects.

MVRDV is an architecture studio based in Rotterdam, founded in 1991 by Maas, Jacob van Rijs and Nathalie de Vries.

Elsewhere in Shenzhen, the studio is also developing an “urban living room” called Shenzhen Terraces as well as a 250-metre-tall skyscraper that was also commissioned by Vanke.

Visuals are courtesy of MVRDV and photography is by Gao Yu.