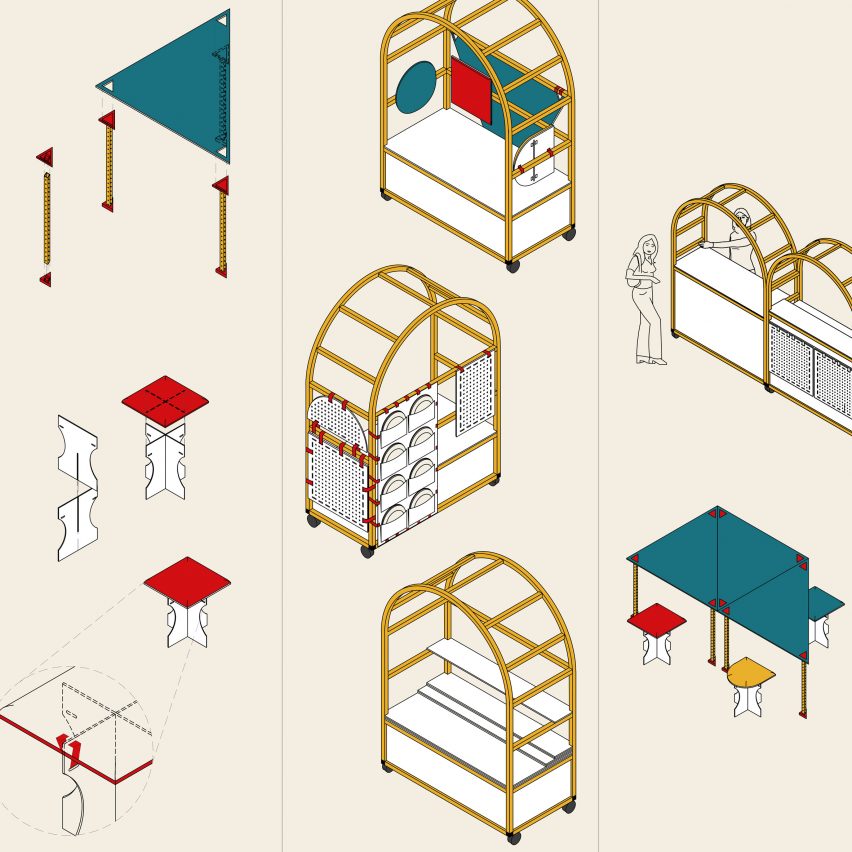 Graduate collective Soup International has designed eight community kitchens that would allow refugees and asylum seekers to enjoy “the normalcy of domestic activities”.

The kitchens were designed for the Migrant Living/Nomadic Domesticities project by Soup International – a group of eight graduates that met whilst studying the MA Interior Design course at the University of East London.

The non-profit organisation has three day centres which provide a range of services that support asylum seekers and refugees in the London borough of Southwark, including weekly communal lunches.

After a fire destroyed the kitchen of SDCAS’ centre in ​St Mary Newington church, the organisation was in need of cooking facilities that could easily be set up within the main body of the church and, if necessary, packed up and transported for use in the other day centres when they’re hosting large-scale workshops or talks.

“Asylum seekers are often devoid of the normalcy of domestic activities and shared experiences, such as access to basic kitchens and cooking time,” said Soup International member, Aysha Farhana.

“In order to engender a sense of neutralisation in the process of belonging, in a new place, it was required to design an open kitchen, a space for sharing, collaboration and interaction.”

Farhana’s design, titled Cellule Kitchen, largely takes cues from the vaulted form of apses that surround organs in a church. It would consist of two arched, plywood-frame modules set on caster wheels – one would be dedicated to cooking and preparing food, while the other would contain cleaning appliances.

The exterior of both modules would be fitted with fold-out benches and box planters where people could grow their own produce.

The Ciborium Kitchen by Soup International’s Himani Harikrishna Ravuri is similarly informed by the aesthetic of churches.

Her stand-alone kitchen unit would come with modular dining seats that can be slotted together to form pews for St Mary Newington’s choir. When not in use, the kitchen would also be concealed by an ornamental screen, much like how an altar is sometimes covered by a four-pillared canopy called a ciborium.

“A kitchen is the heart of any home, it is a place for gatherings, a place where people feel nurtured, healed and comforted – many traditions treat the kitchen as a sacred place,” she explained.

Other members of Soup International focused on materiality when designing their kitchens. Ed Chelsea Rimando’s Eco-Kitchen would be crafted from recyclable materials such as cork and steel, while Ayca M Aydin’s Foldable Kitchen would be composed from lightweight birch-ply panels that can easily be assembled or pulled apart.

The tessellating triangular dining tables that accompany Beth Hooper’s kitchen – which she has called (Don’t) Play With Your Food! – would be made out of standard off-the-shelf elements.

“The parts included are designed to be easily accessible should anyone want to expand on the kit in the future or if any parts need replacing. This means the scope of this project is completely unlimited,” added Hooper.

The gridded structure of Yuan Shiqi’s Memories Decorator kitchen, where those using SDCAS’ services would be encouraged to hang photos or mementoes, is inspired by her time spent renting different flats as a student.

“When I decorated flats with my photos and souvenirs I collected, I started to feel a sense of belonging,” Shiqi explained. “The concept of my design is to provide a sense of belonging for the people who are leaving their home country and come to the UK.”

Soup International are currently fundraising to buy materials so that one of the kitchen designs can be fully realised.

Much like the collective, London-based practice Merrett Houmøller Architects designed a mobile kitchen and pop-up dining space for asylum seekers and refugees in 2018.

Named the Befriending Kitchen, the brightly coloured unit incorporated prep and cooking facilities, as well as storage space for fold-up tables and chairs.