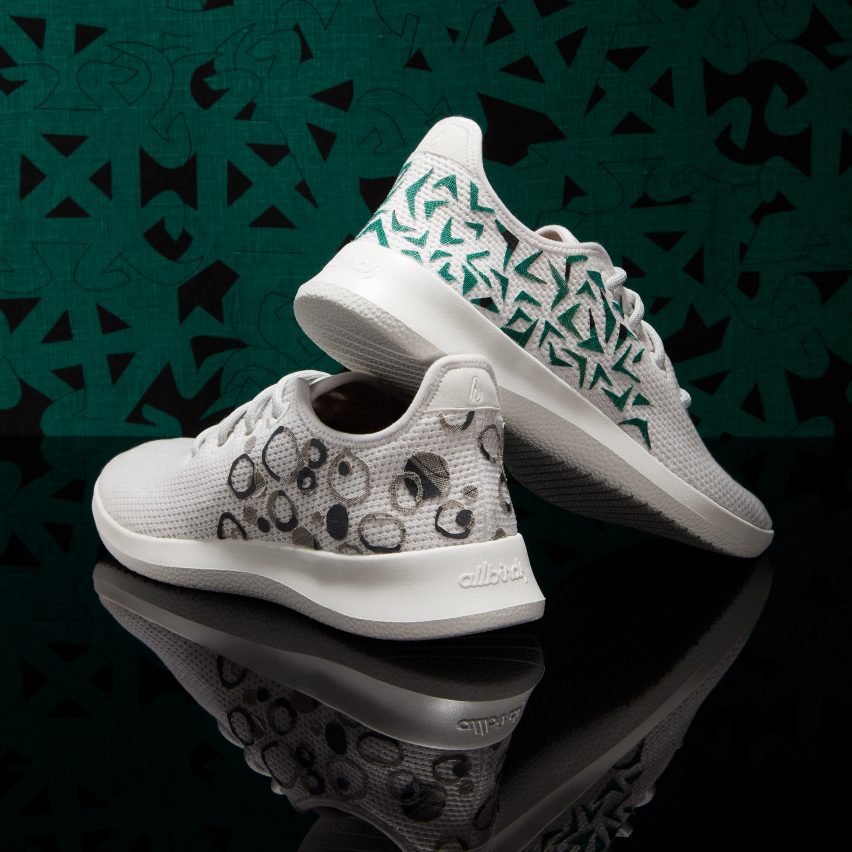 Textile designer Chrissa Amuah has put her own spin on a pair of Allbirds trainers by embellishing them with geometric shapes informed by the Adinkra symbols used in Ghana.

The London-based creative overhauled the fabric design for Allbirds‘ Tree Runner sneakers, which have an upper body comprising one piece of knitted yarn made from eucalyptus trees.

Amuah designed two different patterns based on the age-old Adinkra symbols, which were used in West African societies, particularly among the Akan people of Ghana, as visual representations of certain concepts or proverbs.

Circular outlines and spots coloured in different shades of grey cover one shoe, while green V-shaped markings cover the other. 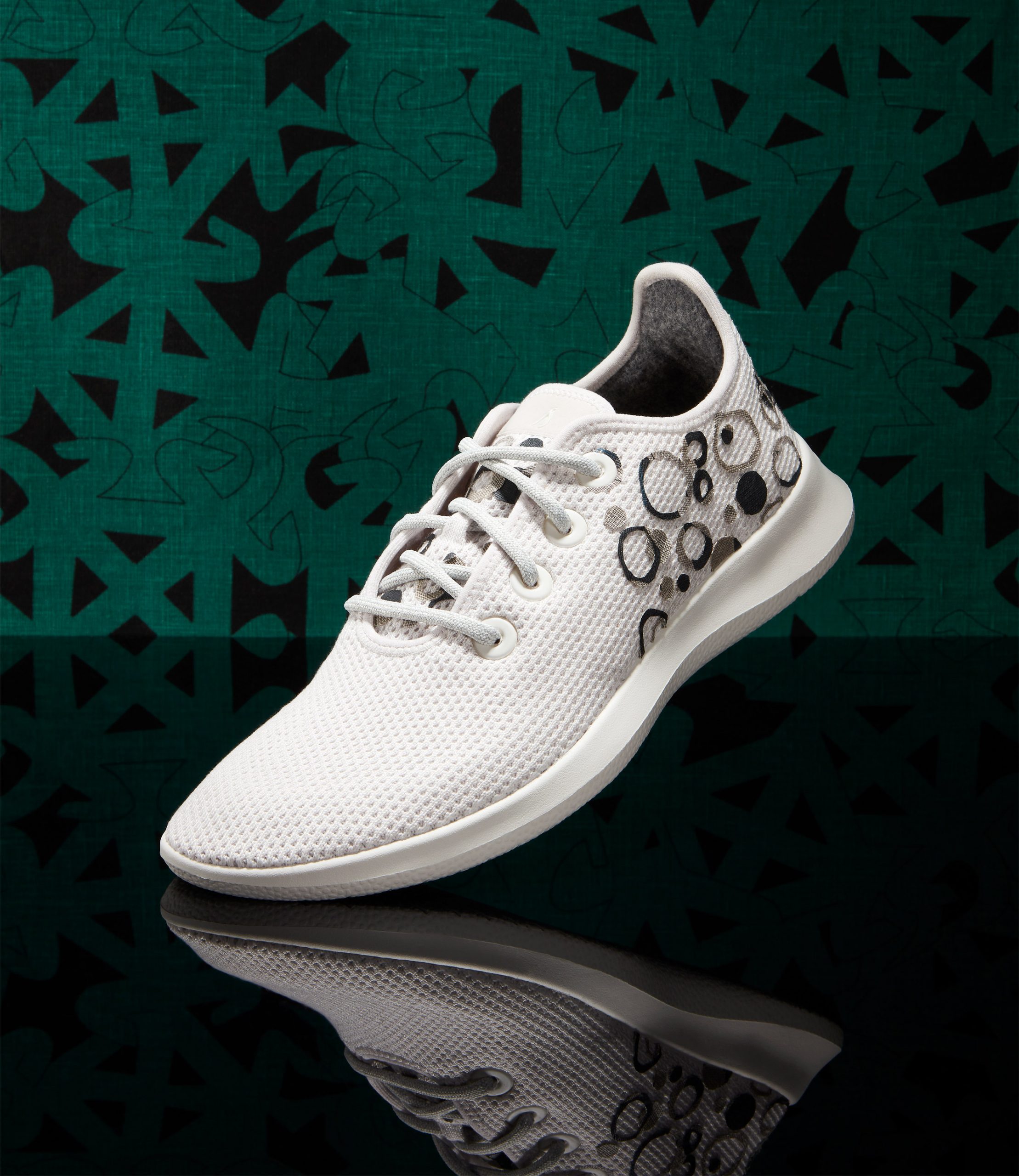 “The meanings of Adinkra are timeless and transcend all cultures,” said Amuah. “Their purpose is to encourage and promote our personal well-being and social harmony.”

While both designs take cues from the Adinkra symbol known as Funtunfunefu Denkyem, which represents unity, the patterns also looked to other emblems for inspiration.

The circular pattern was informed by the Adinkrahene symbol – the “chief” of Adinkra symbols – which stands for authority, greatness, prudence, firmness and magnanimity, the designer explained. 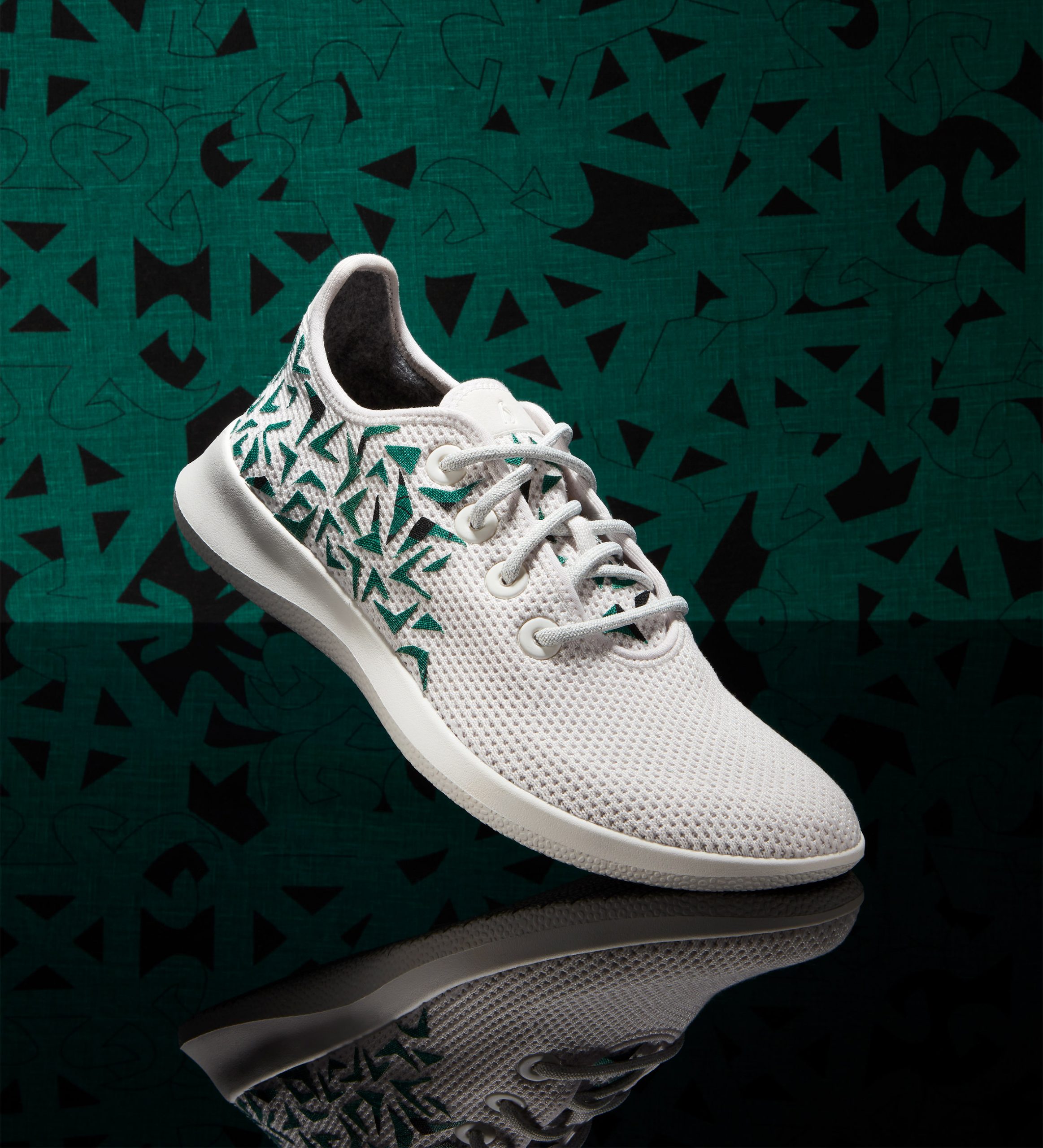 The more angular, green-hued design was based on the Aya symbol, which translates to “fern” in English.

“Aya is a symbol of endurance, independence, defiance against difficulties, hardiness, perseverance and resourcefulness,” said Amuah. “The symbol suggests the overcoming of adversities and outlasting difficulty.”

“Working symbolically and aesthetically, as a pair and individually, only great strides are to be made in these,” said the designer.

“Given all that is happening in the world at present, the meanings and symbolism of Adinkra have never been more desperately needed and significant,” she added. 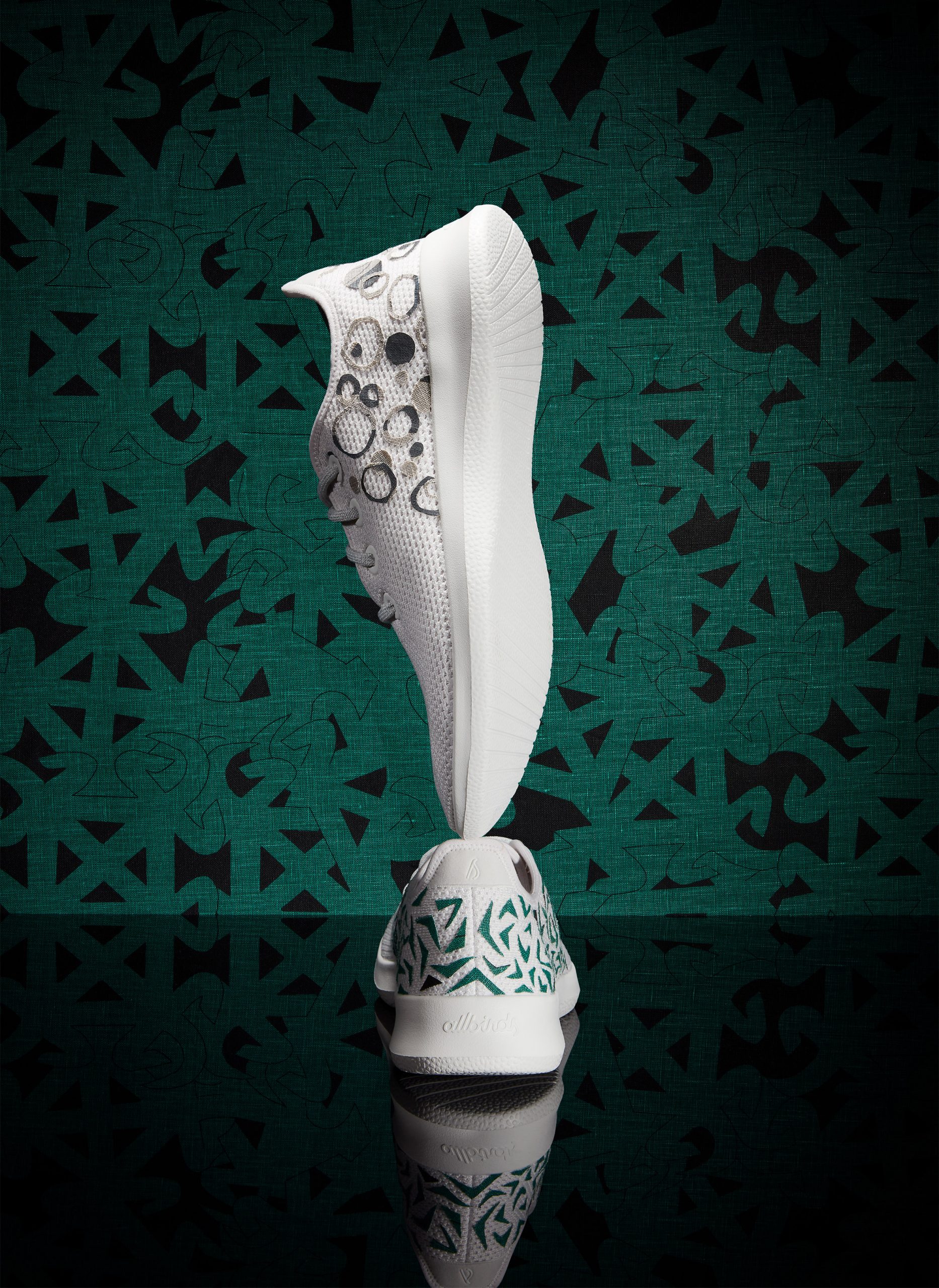 Allbirds will be auctioning off the one-off pair of UK size 10 trainers revamped by Amuah on Amuah’s Instagram page today, on behalf of the brand’s Allgood Collective program.

Proceeds from the auction will be donated to not-for-profit organisation the OR Foundation, and its work in supporting the Kayayei women of Ghana during the coronavirus pandemic. 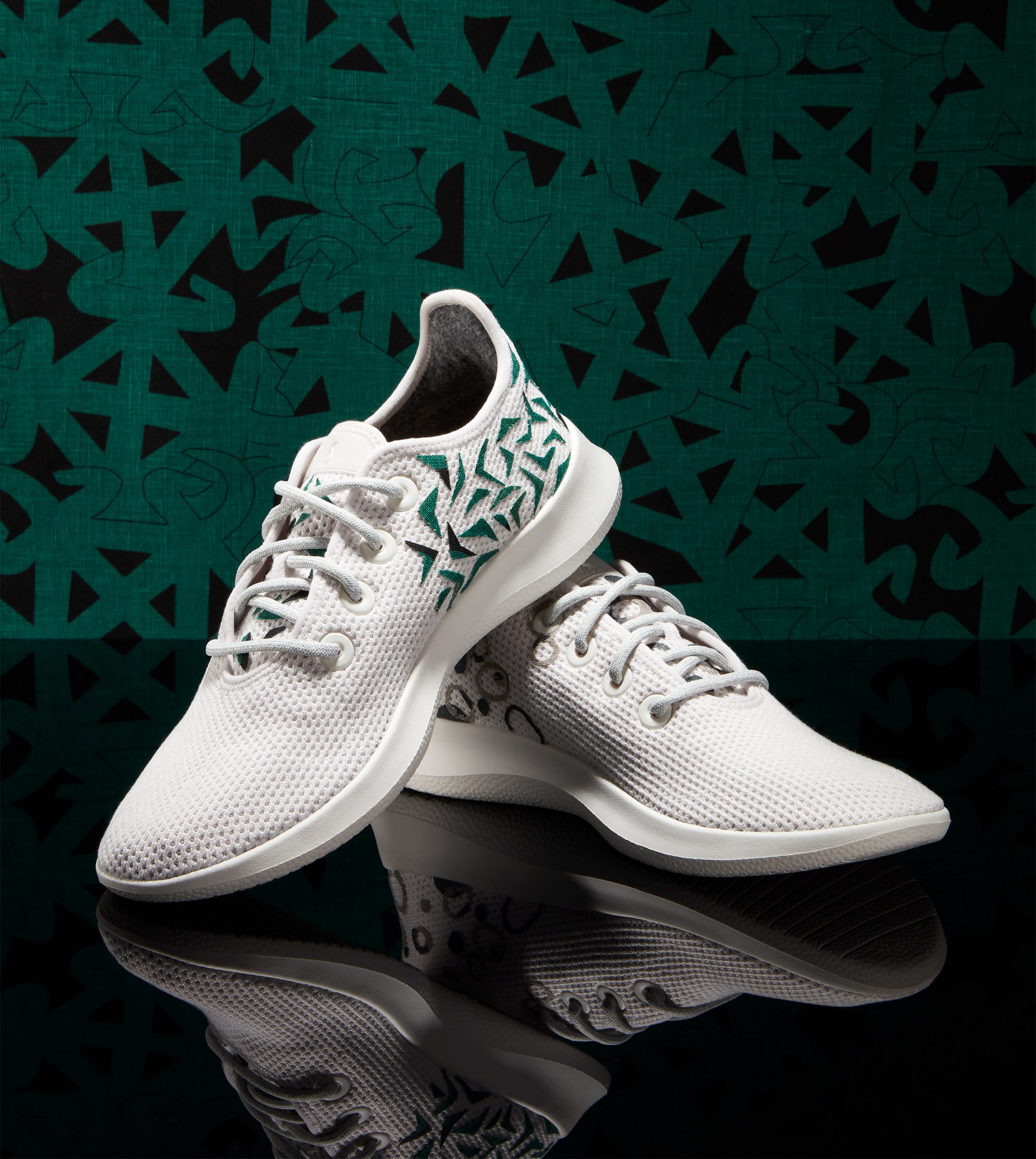 Allbirds and Amuah hope that enough money will be raised in order to support the OR Foundation’s long-term goal of building a factory on the outskirts of Accra, which will be used to repurpose second-hand clothing and to help redirect the excessive amount of textile waste sent to landfill in Ghana each year.

Amuah, who runs London-based studio AMWA Designs, also founded a platform called Africa by Design, which promotes designers from sub-Saharan Africa in a bid to give the talent in the region “the respect that it is due”.

The designer recently spoke to Dezeen about the programme in a live interview as part of the Virtual Design Festival, as well as selecting eight products by African creatives who are part of the platform.

Photography is by Simon Lyle Ritchie.