Ten translucent buildings with exteriors that allow light to pass through 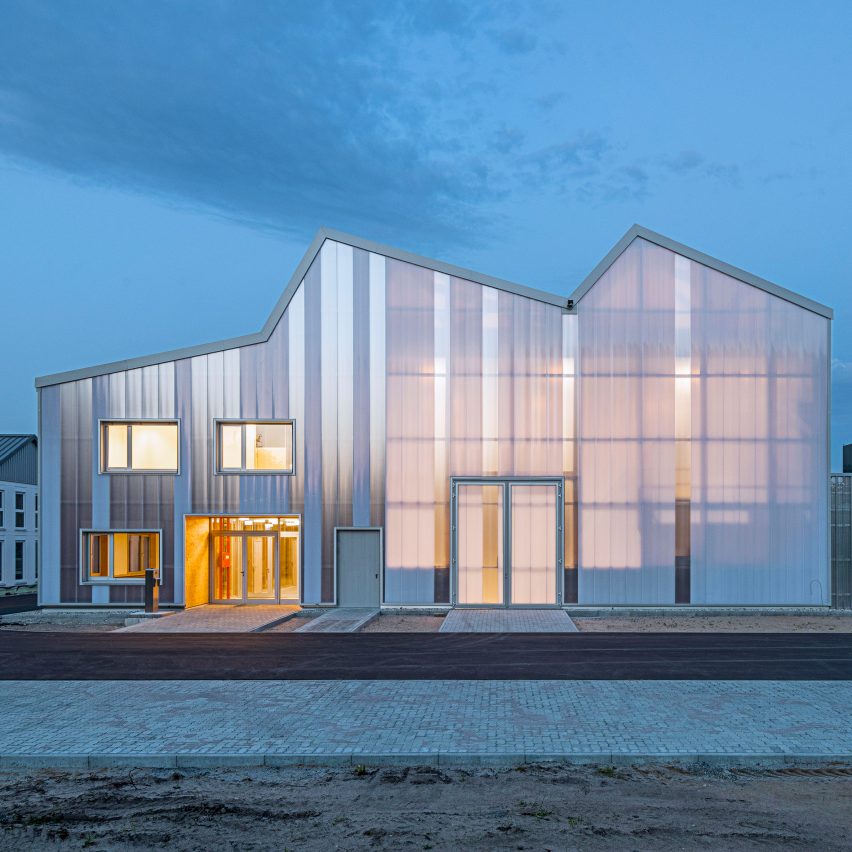 A laboratory, a tennis pavilion and a kindergarten are among these ten translucent buildings with exteriors made from semi-transparent materials including polycarbonate and frosted glass. 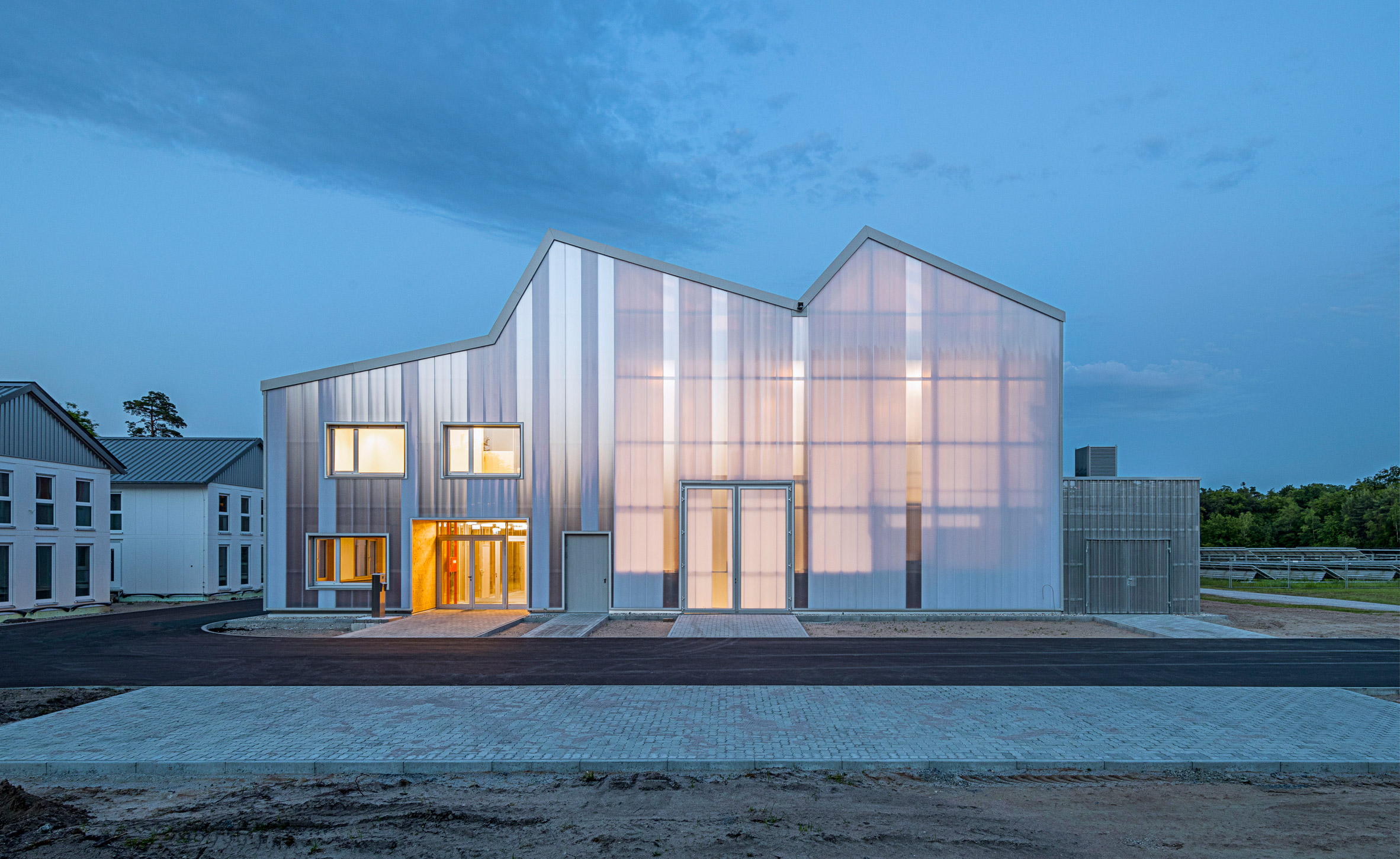 This timber and concrete laboratory at Germany’s Karlsruhe Institute of Technology is encased in translucent polycarbonate panels, echoing the industrial buildings that surround it. Inside, exposed concrete and chipboard panels create a functional, airy space.

The polycarbonate exterior allows a consistent amount of daylight to brighten the laboratory’s test areas and creates a lantern-like glow from the building in the evenings.

Find out more about Karlsruhe Institute of Technology › 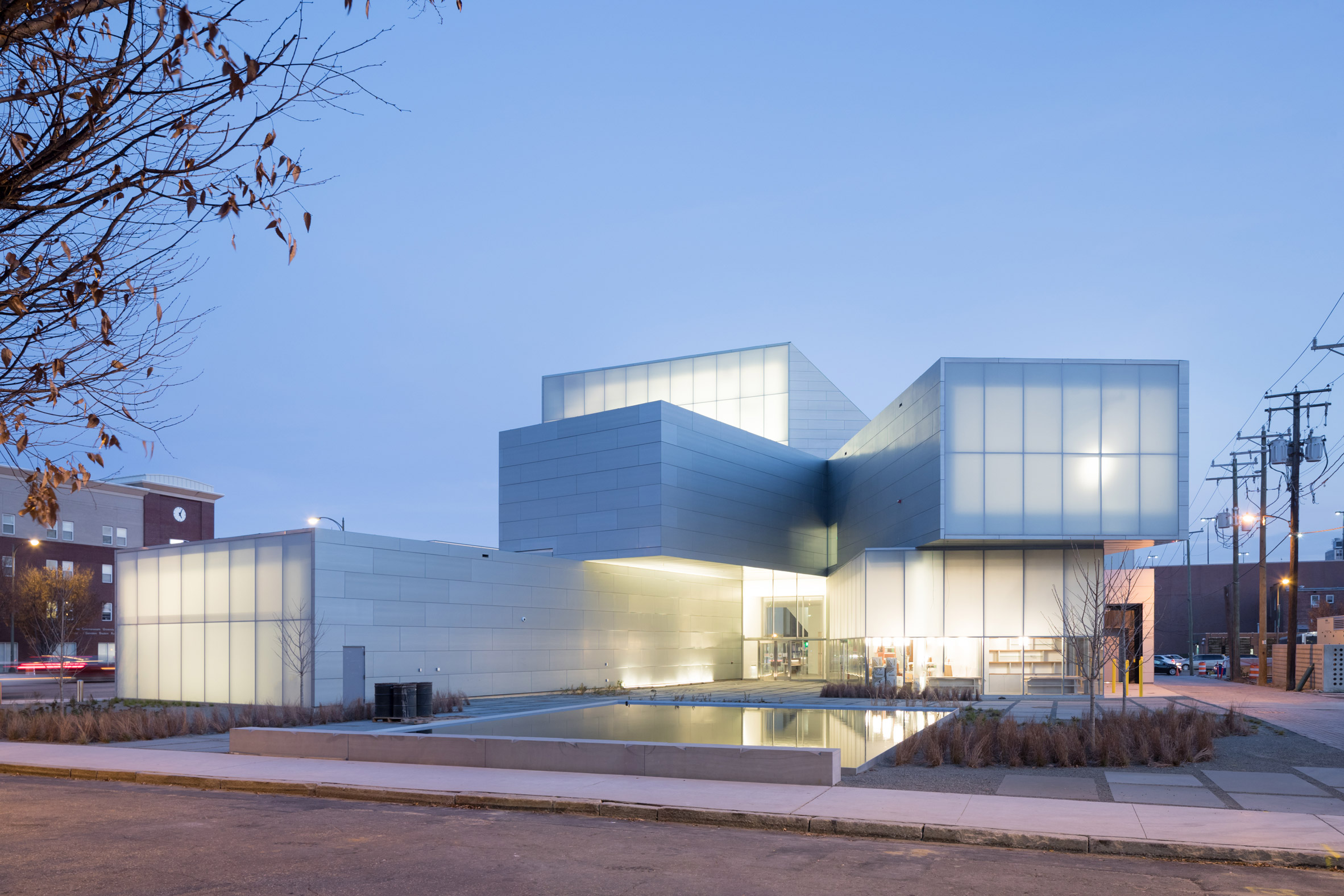 Steven Holl‘s exhibition and performance centre for Virginia Commonwealth University is made from irregularly shaped blocks that slot together, covered in translucent glass panels and pre-weathered zinc.

A double-height atrium connects three of the galleries in the building, which forms the gateway to the university’s campus.

The architect reduced the need for artificial lighting inside by adding skylights and placing both them and the windows strategically to make the most of the natural light, which also streams through the glass walls.

The building recalls Holl’s 2006 Bloch Building at the Nelson-Atkins Museum in Kansas City, which is clad in frosted glass backed by light-diffusing plastic tubes to create an ethereal effect.

Find out more about Institute of Contemporary Art › 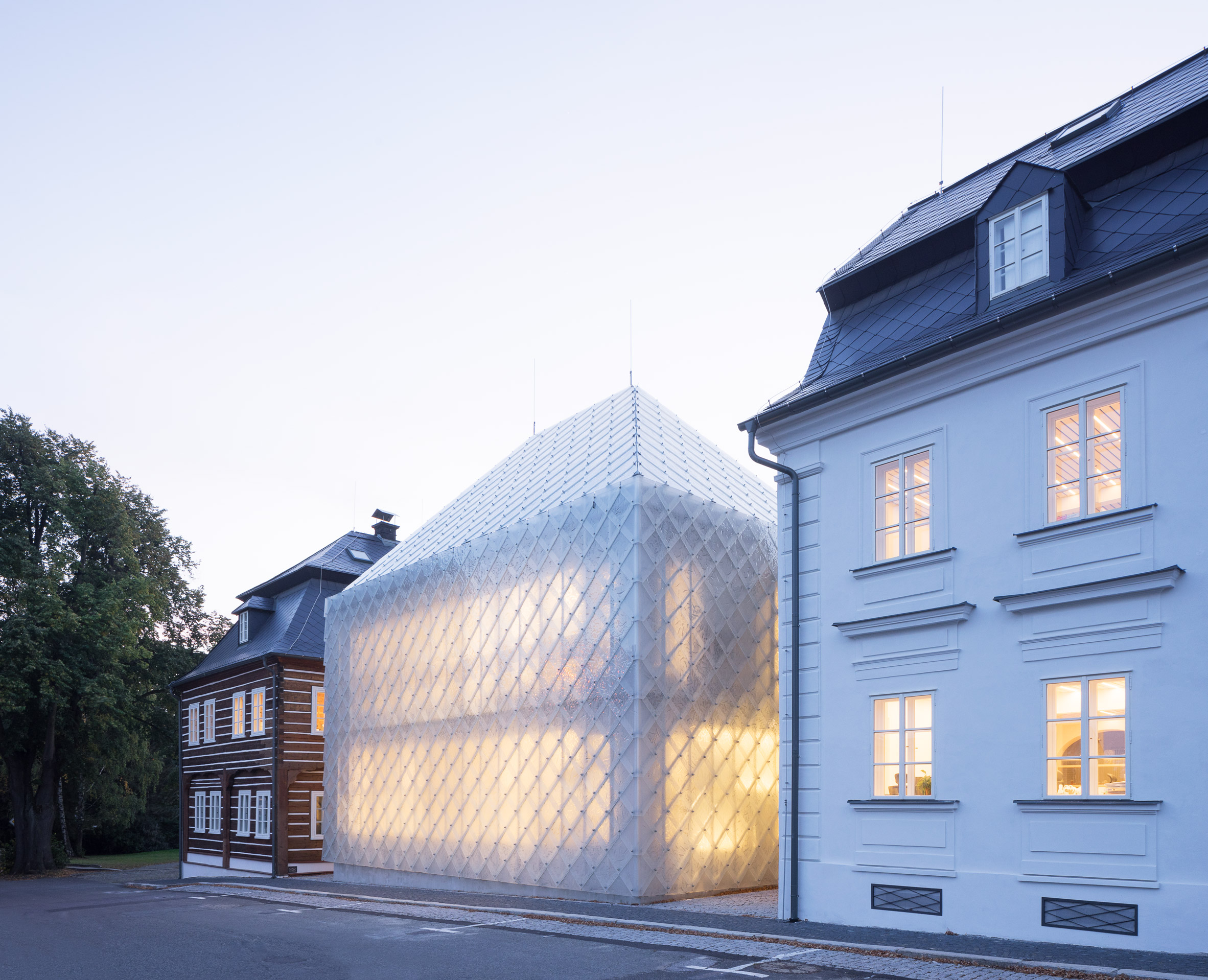 Its form is a reinterpretation of the Česká Lípa region’s traditional slate-shingle-covered houses, with a facade made from 1,400 frosted glass tiles. The glass company developed the glass stencils that cover the mantle and roof itself.

Find out more about Lasvit headquarters › 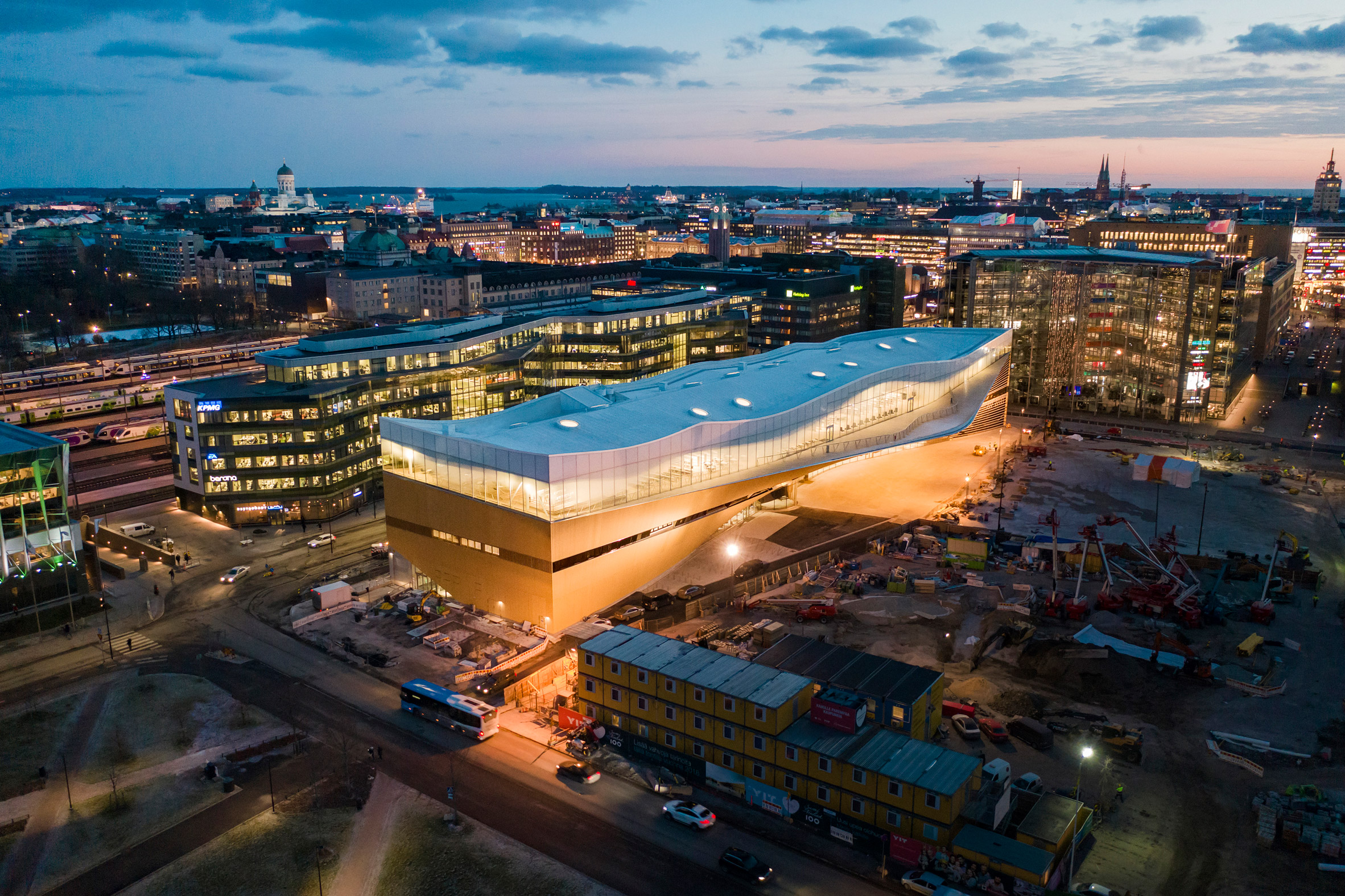 The Helsinki Central Library, made from locally-sourced spruce, is topped with a reading room with an undulating roof and translucent walls.

The room contains the library stacks and its full-height glazing offers readers views over the entire city. “The serene atmosphere invites visitors to read, learn, think and to enjoy themselves,” ALA Architects said. 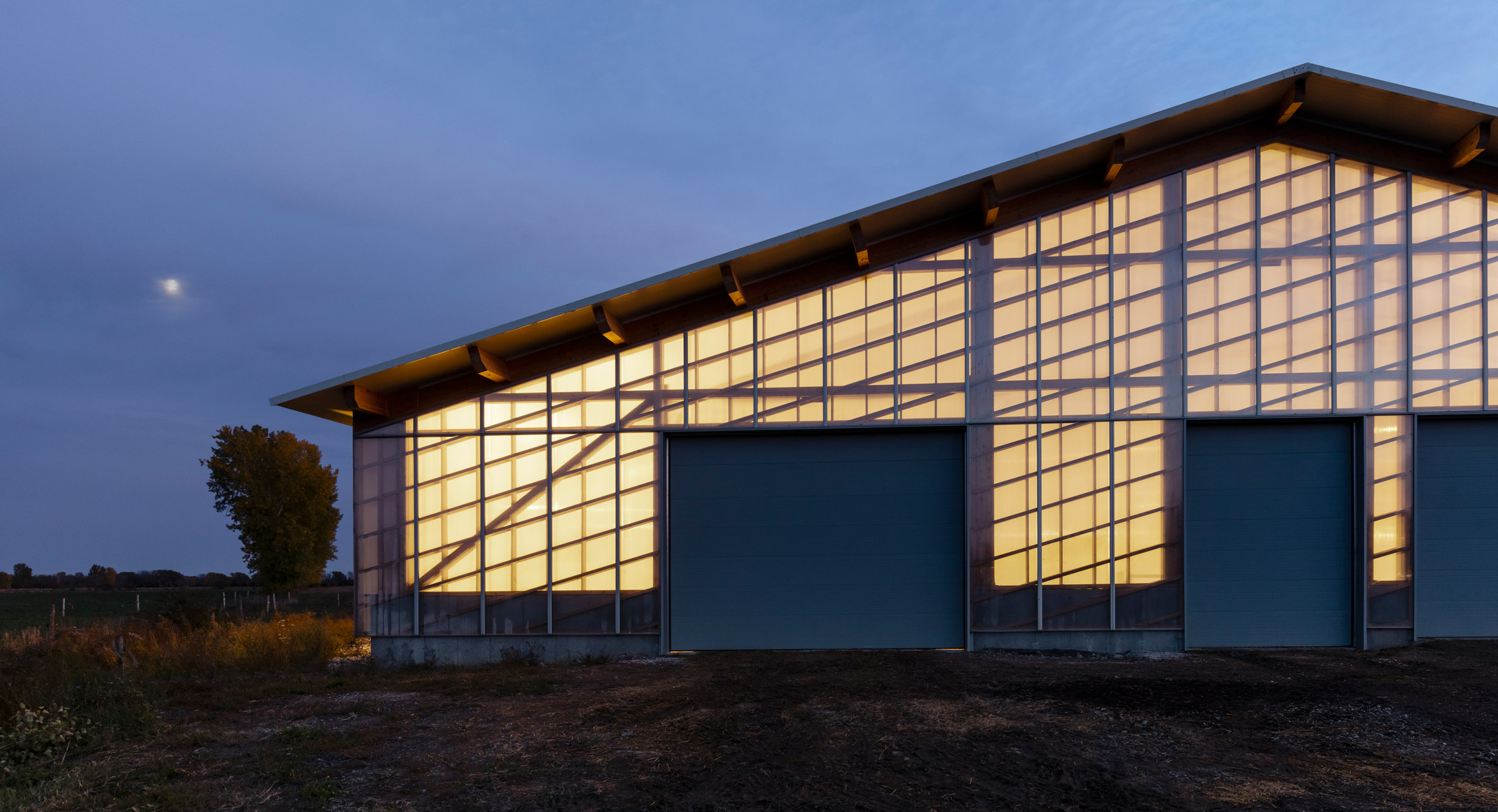 La Shed Architecture chose polycarbonate for some of the walls of this barn in Québec, in order to expose the internal structure of the building and blur the boundaries between the interior and exterior.

The studio and the client, an organic cheese farm, wanted natural light let in through the sheer walls to enhance well-being and productivity. 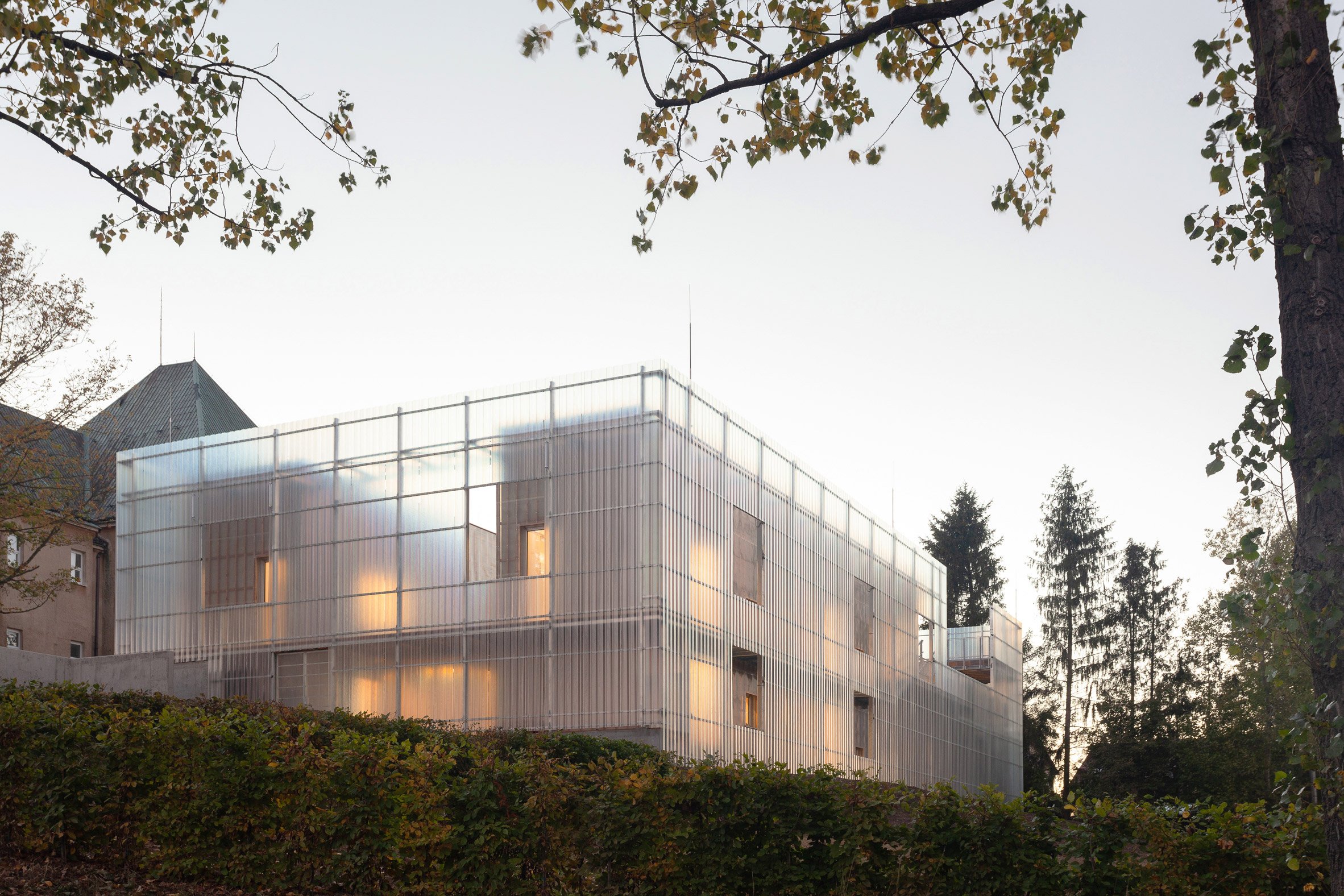 Petr Stolin Architekt wrapped a double-skinned translucent facade of fibreglass around this Czech Republic kindergarten, located in the town of Liberec. 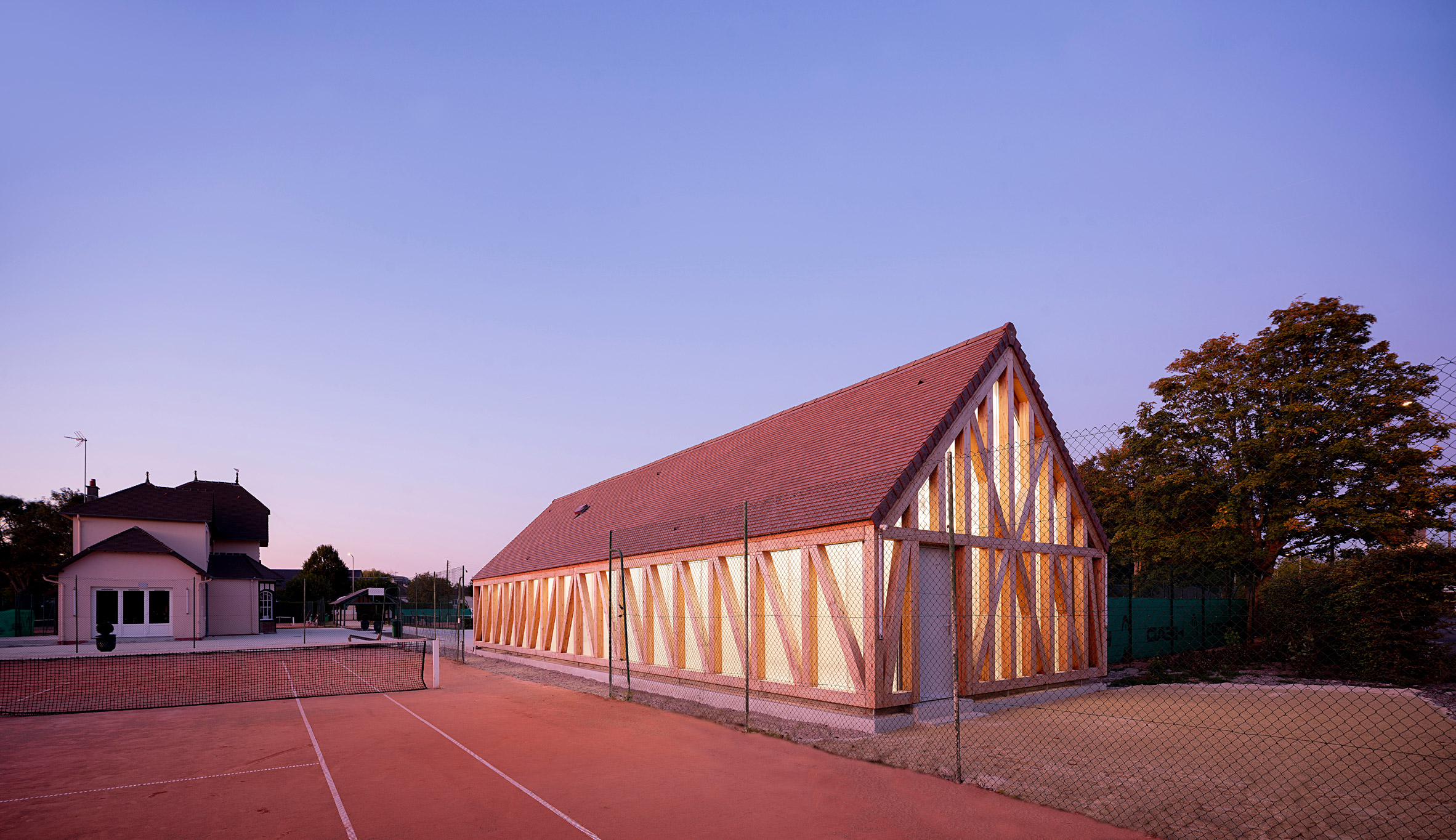 This half-timbered changing pavilion in northern France was designed to be a contemporary reinterpretation of the traditional half-timbered buildings found in Normandy but with a modern update.

A second wall is set back behind the timber structure, made from a double skin of translucent polycarbonate that both acts as the rain screen and turns the building into a glowing box at night. 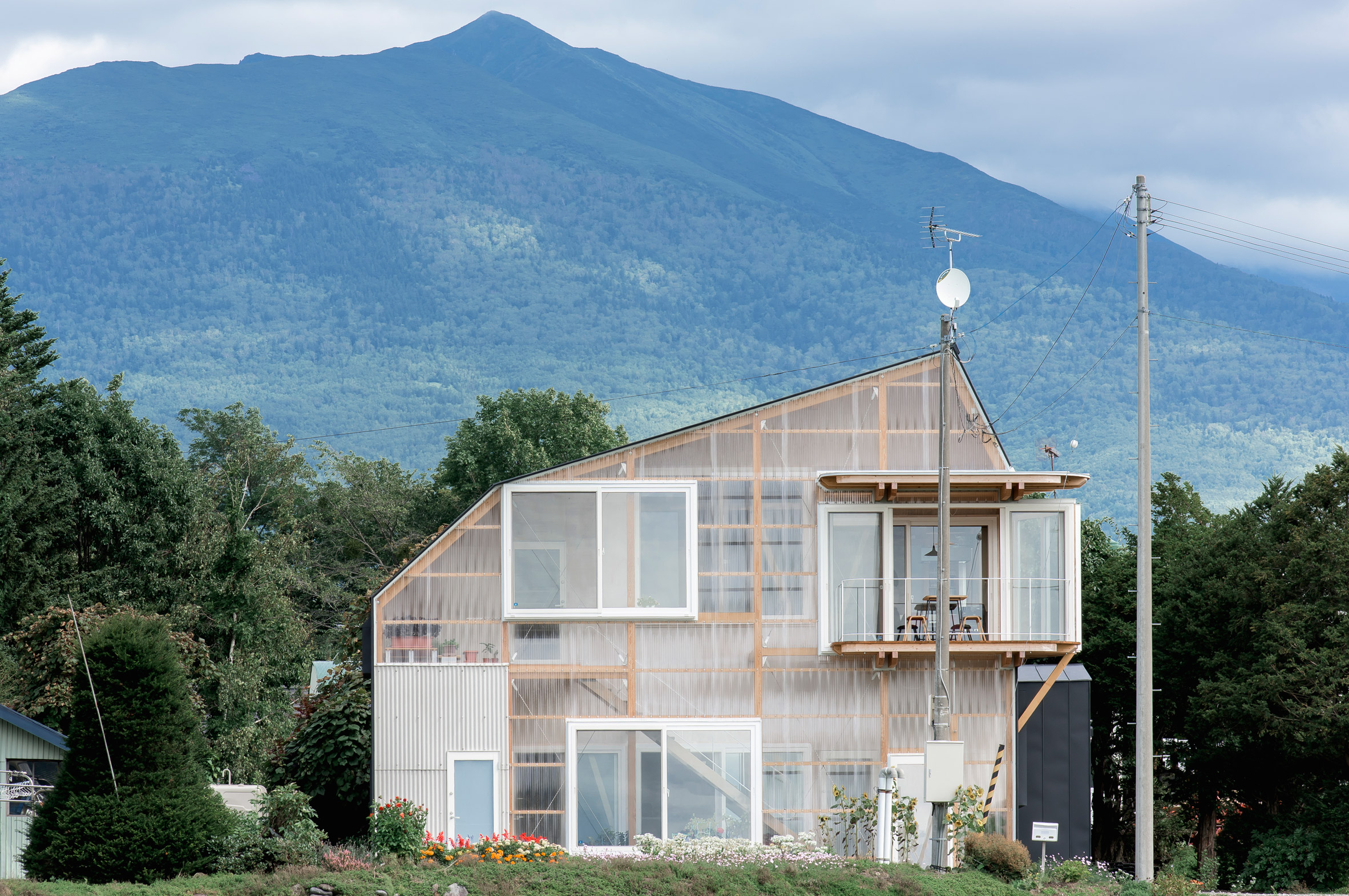 The dramatic renovation of this 1974 house outside Furano, Japan was named for its intriguing asymmetrical roof. The architects also removed its clapboard facade and replaced it with black sheet metal on three sides, while the fourth side was covered in translucent corrugated plastic.

This created a greenhouse-style space that opens up the entire front of the house, enabling its residents to enjoy the light coming into both the children’s area at ground level and the adult’s rooms, above.

Find out more about Deformed Roofs of Furano › 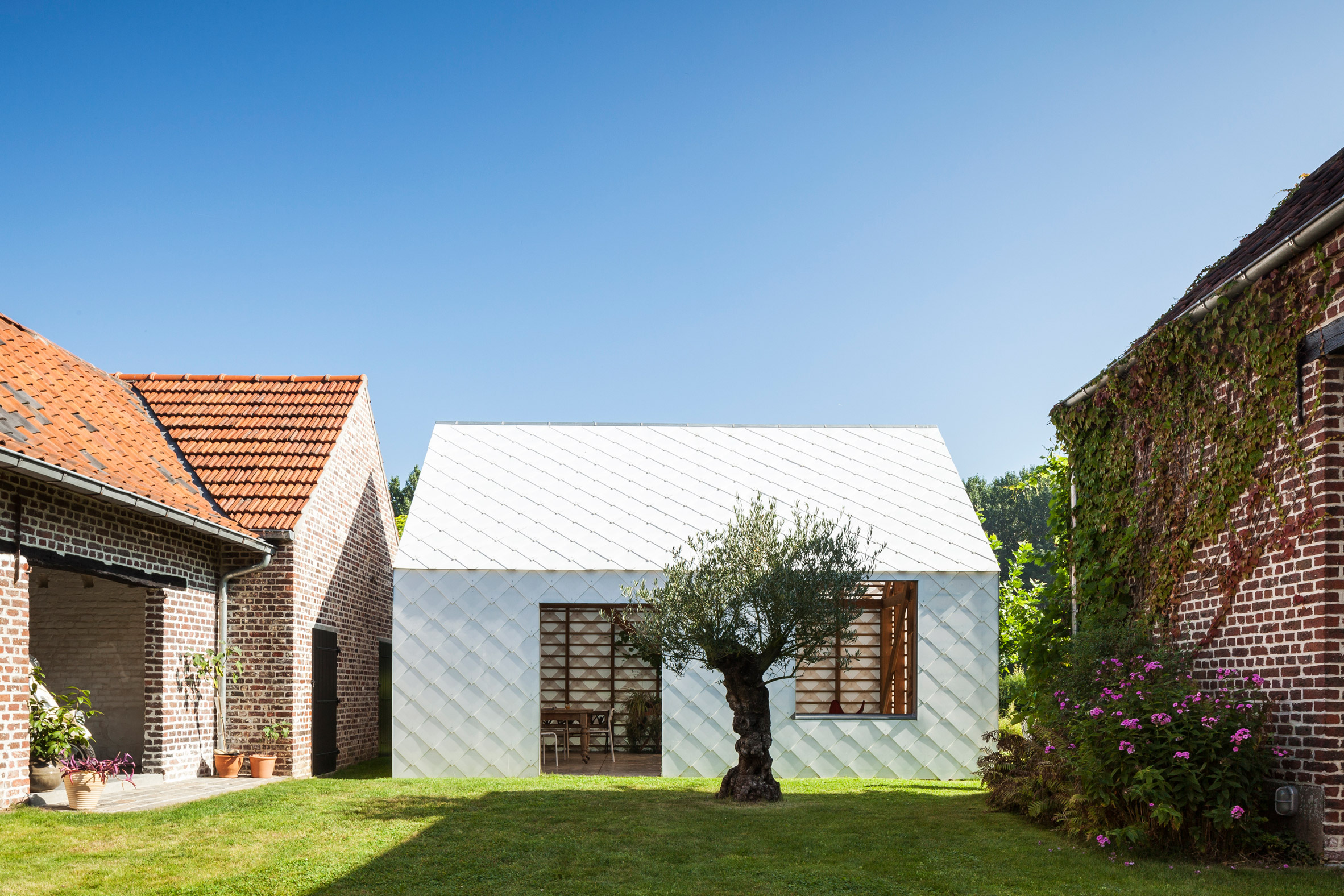 Atelier Janda Vanderghote co-founder Janda created a garden room at her parent’s home in northern Belgium from translucent polycarbonate shingles. The small building was designed to replace an earlier structure that was close to collapsing.

Janda said she wanted to make the shingles, which are normally used for cladding small garden structures, feel more special. “We wanted to give the material a new vibe,” she told Dezeen.

Find out more about Garden Room › 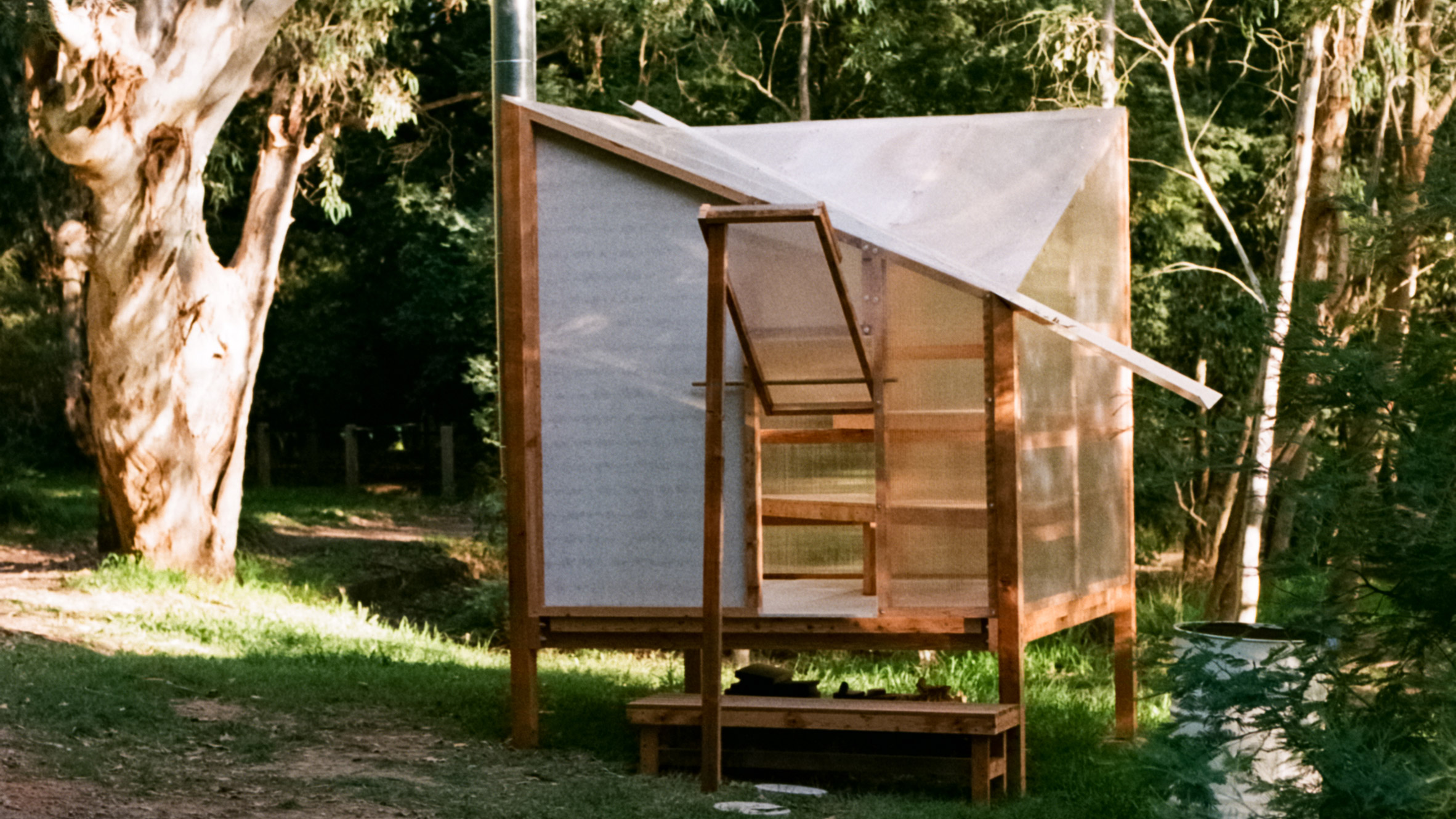 This prefabricated, flat-pack sauna with walls made from polycarbonate cladding is located next to the Yarra River in Melbourne and was designed to be built, disassembled and reused without the use of heavy machinery.

Its translucent walls and ceiling let the natural light in. “When the sun is out, the material also allows for a natural intensification of the temperature in the space,” said Studio Rain co-founder Rachel Mackay.

Find out more about Atmosphere: A Revival ›

The post Ten translucent buildings with exteriors that allow light to pass through appeared first on Dezeen.