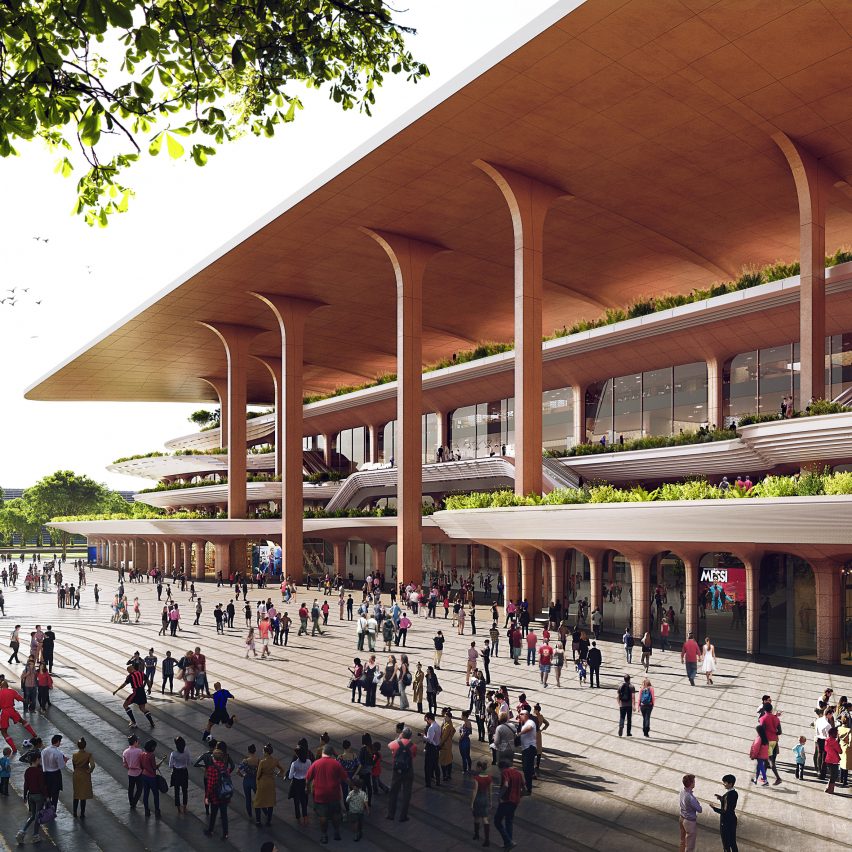 Set to be built in the Fengdong business district of Xi’an, one of China’s oldest cities, the stadium will contain 60,000 seats and become a venue for the 2023 AFC Asian Cup. 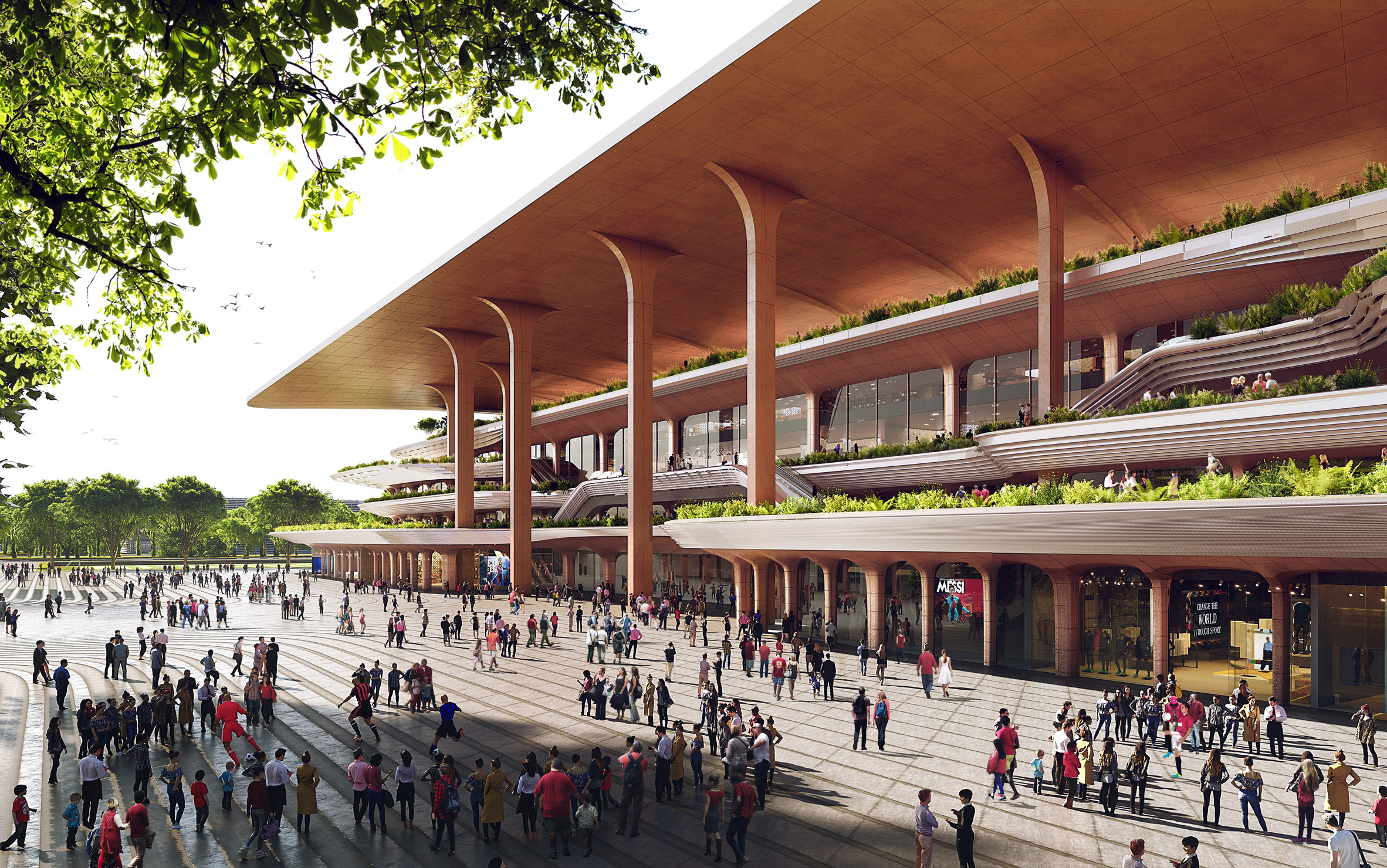 Once complete, Xi’an International Football Centre will incorporate a mix of public dining and entertainment facilities and also be used to host other national, international and domestic league games, alongside training academies, performances and cultural events.

Zaha Hadid Architects described this as a “legacy mode of operations” that will ensure the stadium can continue to serve the city long after the 2023 tournament.

“Xi’an has a long history of welcoming visitors from around the world,” explained Zaha Hadid Architects. “In the global arena of football, the Xi’an International Football Centre continues this tradition and builds a lasting legacy of new civic spaces, sports and recreational facilities for the city,” it said.

“Integrated within the orthogonal urban grid of Fengdong’s business district, the stadium’s open facades invite the city into the heart of the building to enjoy its public spaces, recreation and dining facilities throughout the day.” 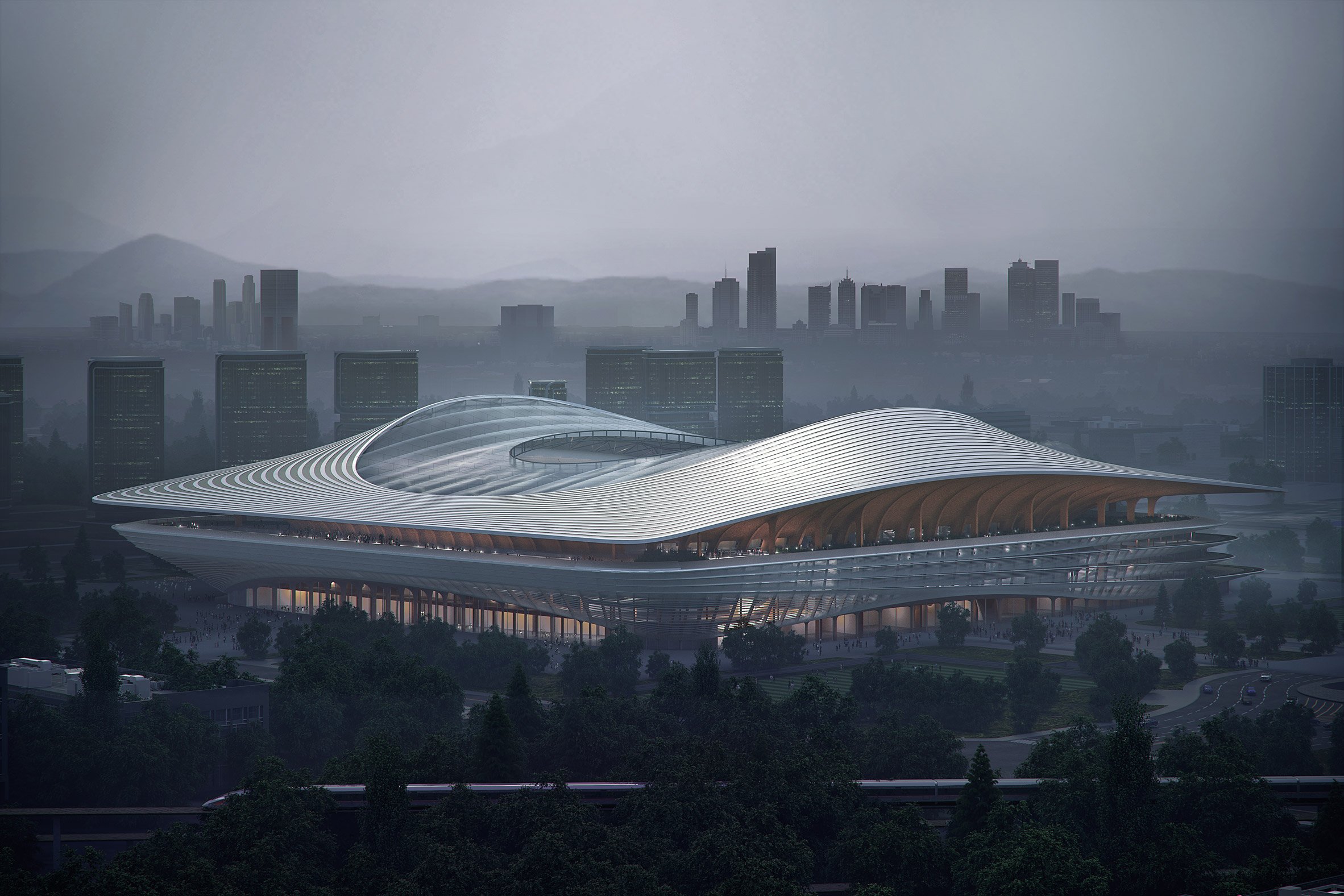 The planted balconies of Xi’an International Football Centre, referred to by Zaha Hadid Architects as “garden terraces”, will be built along the stadium’s south-facing elevation.

Sheltered by the overhanging rooftop, these are intended to provide shade from Xi’an’s hot summer climate. They will also host service areas for visitors and viewpoints of Qing Mountain. 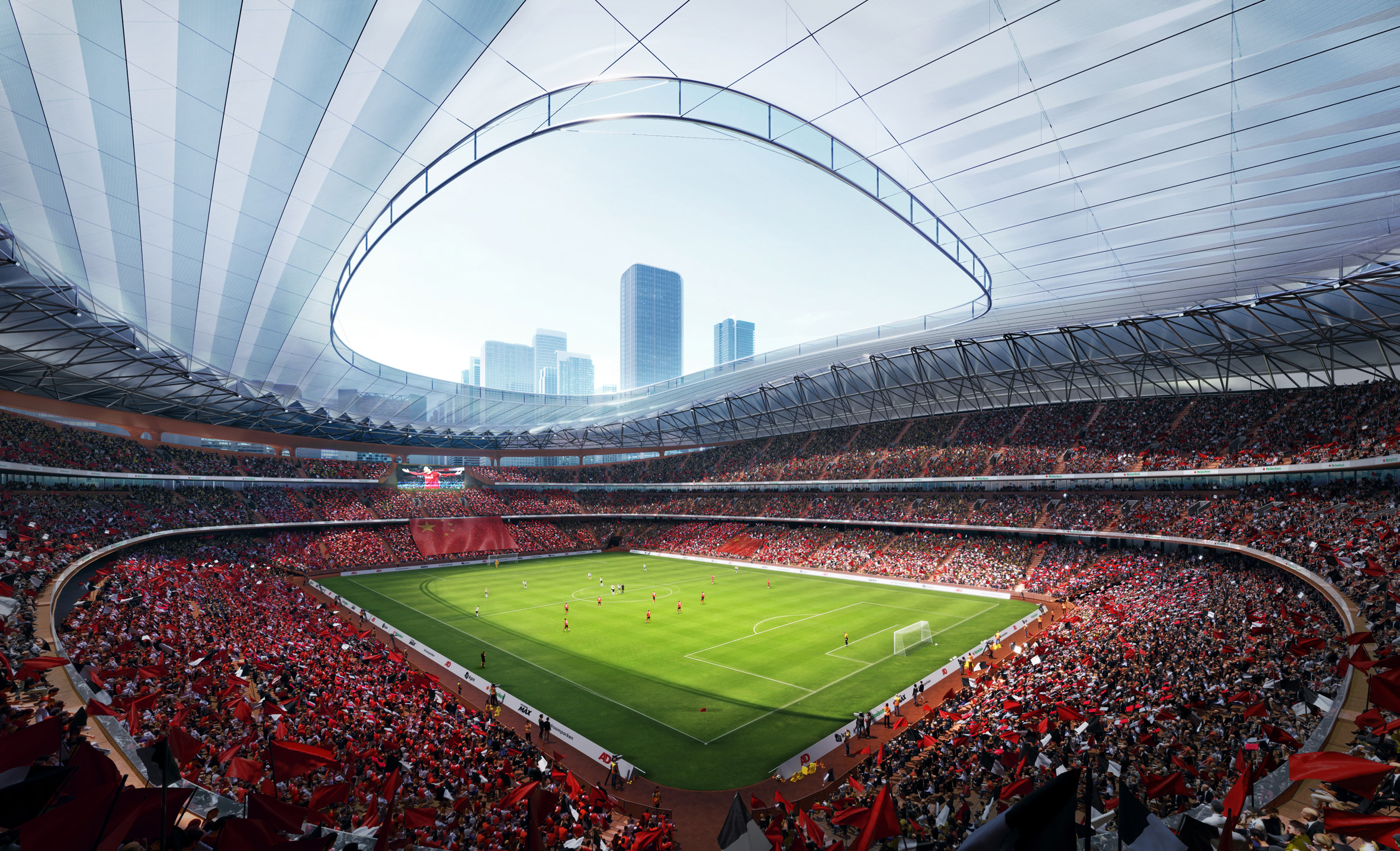 The remainder of the stadium’s facade will be composed of giant columns and cladding with “sweeping lines” that Zaha Hadid Architects claim will help dissipate northerly winds.

Teamed with the building’s sinuous, overhanging rooftop and south-facing terraces, this cladding is also intended to enhance the building’s fluid form.

Inside, Xi’an International Football Centre’s will have a distinctive saddle-shaped seating area, developed by Zaha Hadid Architects to maximise views of the pitch from all 60,000 seats.

“Digital modelling has defined the geometry of the spectators’ seating bowl to optimise proximity and views to the field of play from all 60,000 seats, generating the most exciting atmosphere for football and ensuring an outstanding match experience for all players and spectators,” explained the studio. 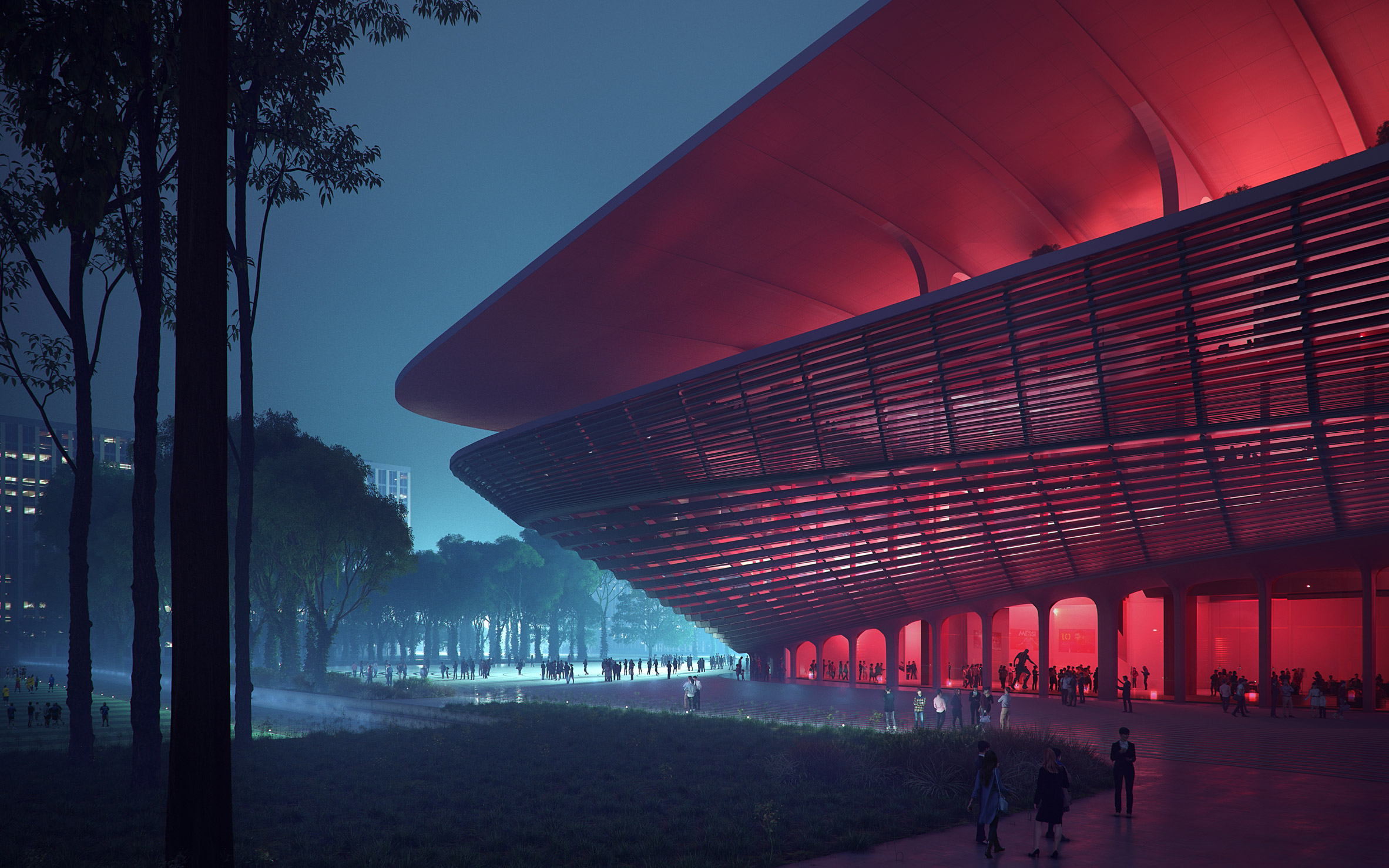 All seating will be sheltered by the translucent roof that will be open at its centre, which was designed to ensure there is plenty of natural light and encourage the growth of the grass on the pitch.

The large roof span will be achieved using a lightweight, tensile cable-net structure, which will help reduce its load, material footprint, and in turn, the amount of primary structure required to support it. 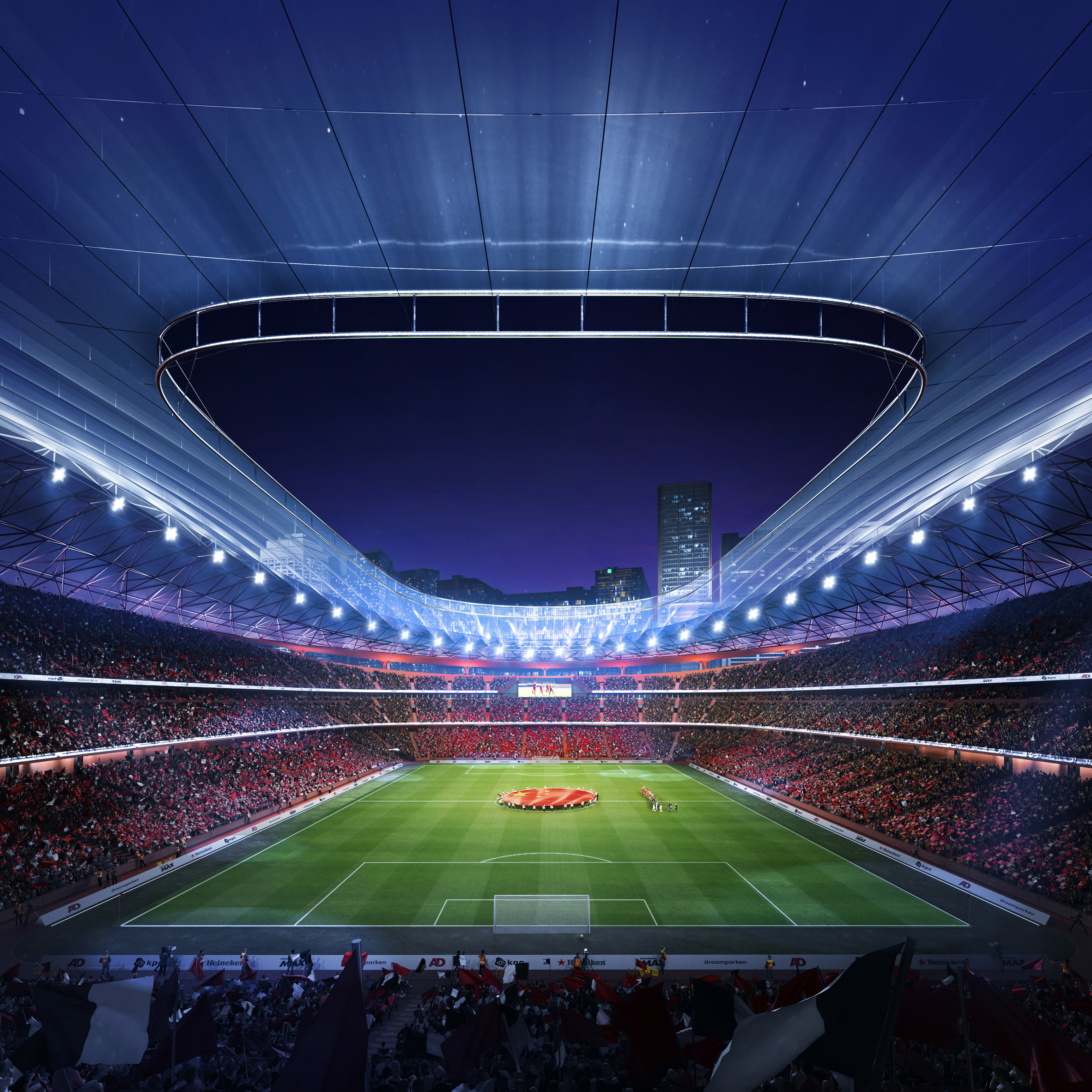 Zaha Hadid Architects was founded in 1980 by the late British-Iraqi architect Zaha Hadid. Today it is headed up by Patrik Schumacher and its main office is in Clerkenwell, London.

Elsewhere in China, the studio is currently developing the OPPO Shenzhen headquarters and the “greenest building” in Shanghai for renewable energy firm CECEP.

The design of Xi’an International Football Centre follows the development of the studio’s 5,000-seat football stadium for Forest Green Rovers that will be built entirely from wood.