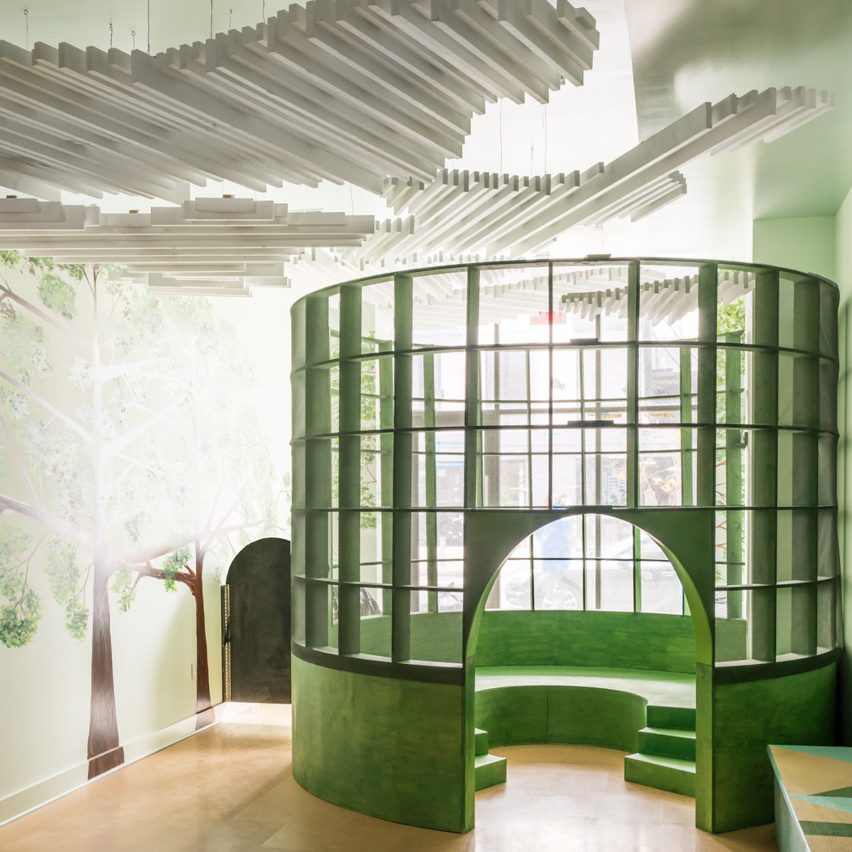 New York studio Architensions has designed structures modeled on clouds, treehouses, tunnels and igloos for an indoor playground for children in Brooklyn.

Called Children’s Playspace, the space was designed for a wellness professional who wanted an intimate play area for children.

Architensions‘ response was to create structures in different colours and shapes that could offer different sensory experiences based on natural landscapes. 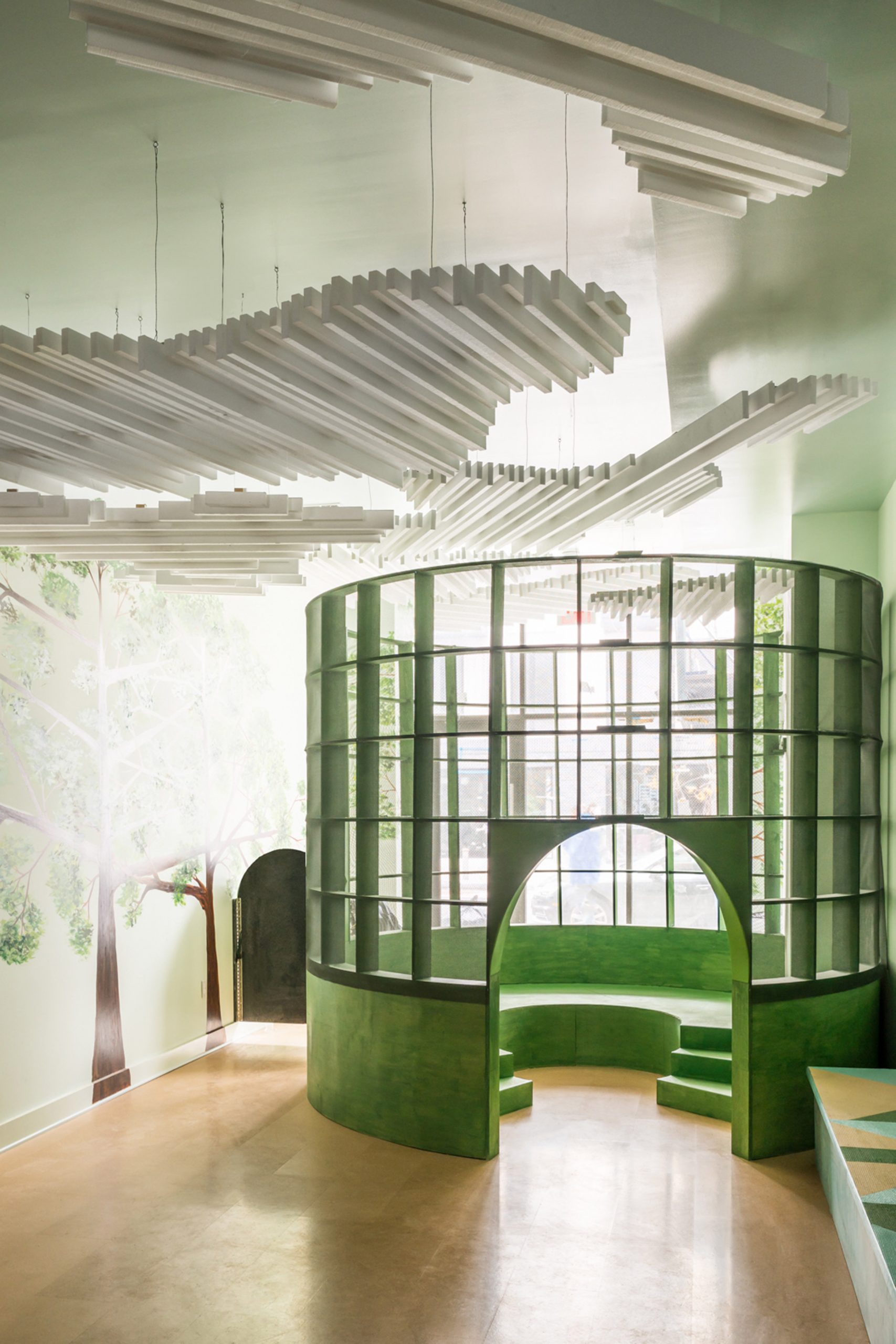 Among these is an eight-foot-tall (2.4-metre-tall) green cylinder, known as the Treehouse, which is composed of a stepped bottom and gridded top wrapped in mesh.

The Tunnel meanwhile has a slanted, gridded exterior and arched opening carved through it that leads up steps and down a ramp. Geometric windows with colourful frames protrude from the exterior to offer views out and inside to the brightly coloured orange walls. 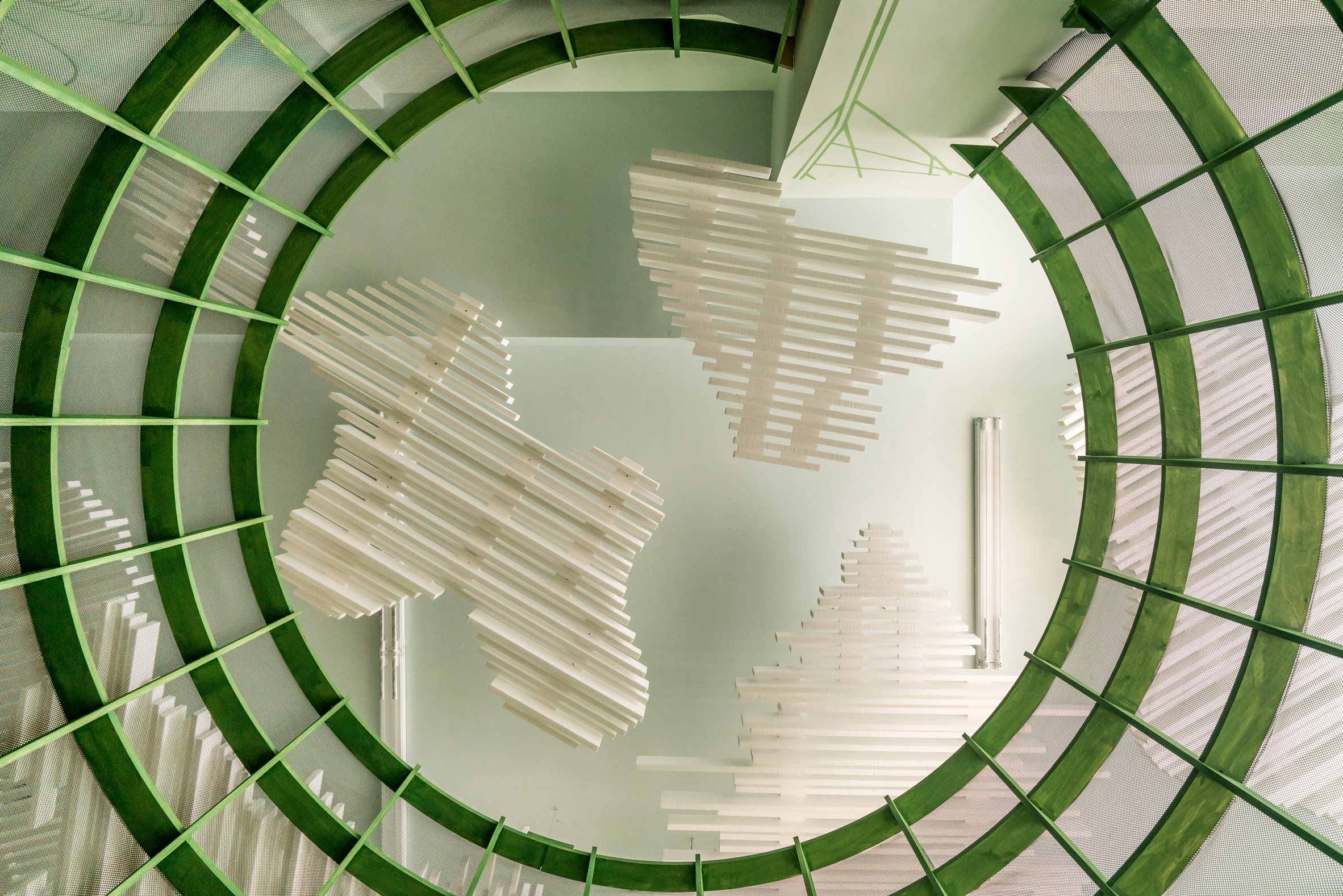 “As designers, we had to challenge ourselves and ask a number of questions,” said Architensions co-principal Alessandro Orsini.

“How can the built environment relate to children’s imagination, cognitive development, and aesthetic appeal? Is it possible to merge aesthetics and function for a space that appeals to children?” 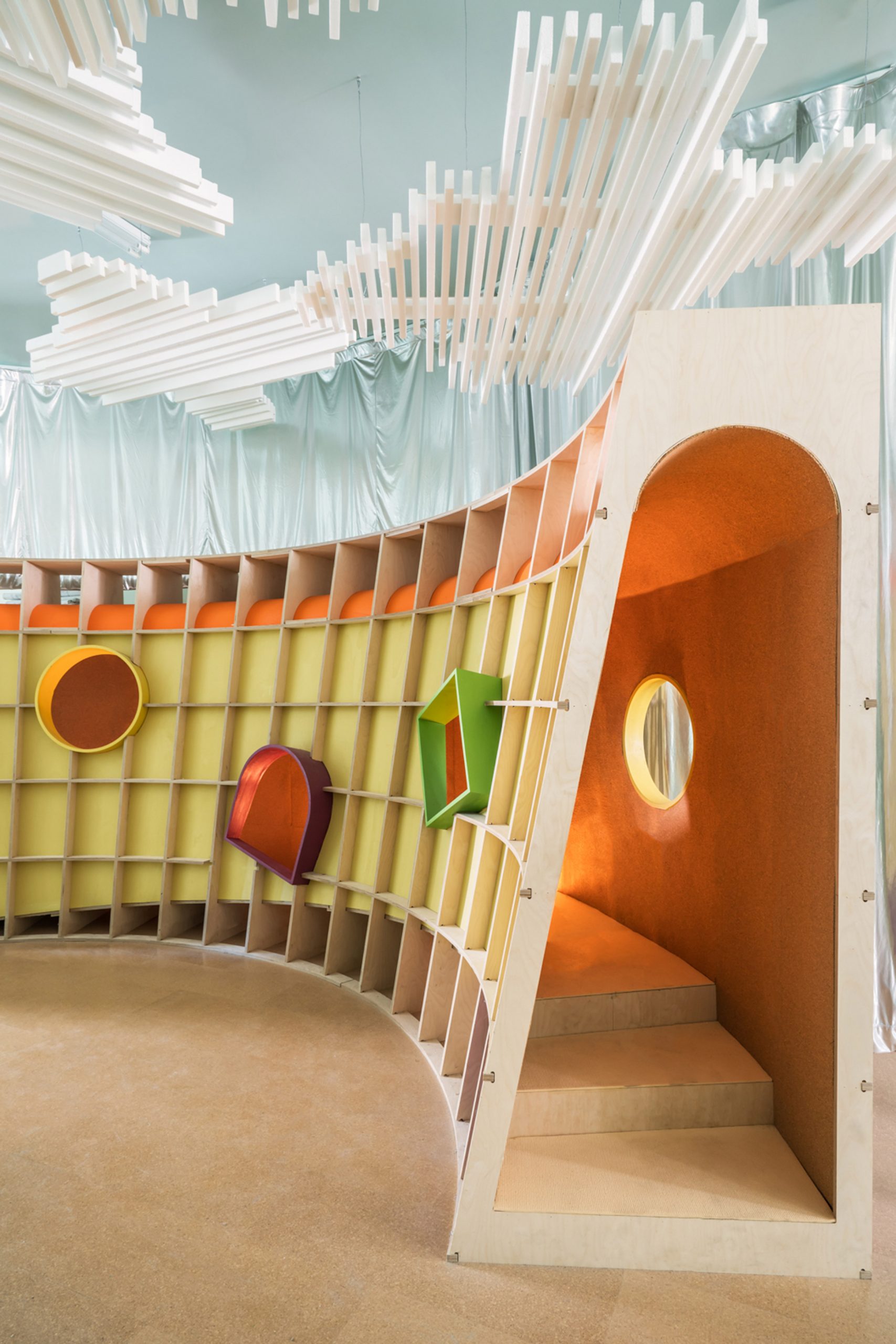 Another structure, called Igloo, has a circular white base and a suspended triangular top covered with semi-translucent washi paper.

Architensions said the project took cues from other architect-designed playgrounds such as the structures architect Aldo van Eyck’s built in his series of of Amsterdam playscapes and the never-built Contoured Playground Japanese American artist and landscape architect Isamu Noguchi designed to encourage freeform play. 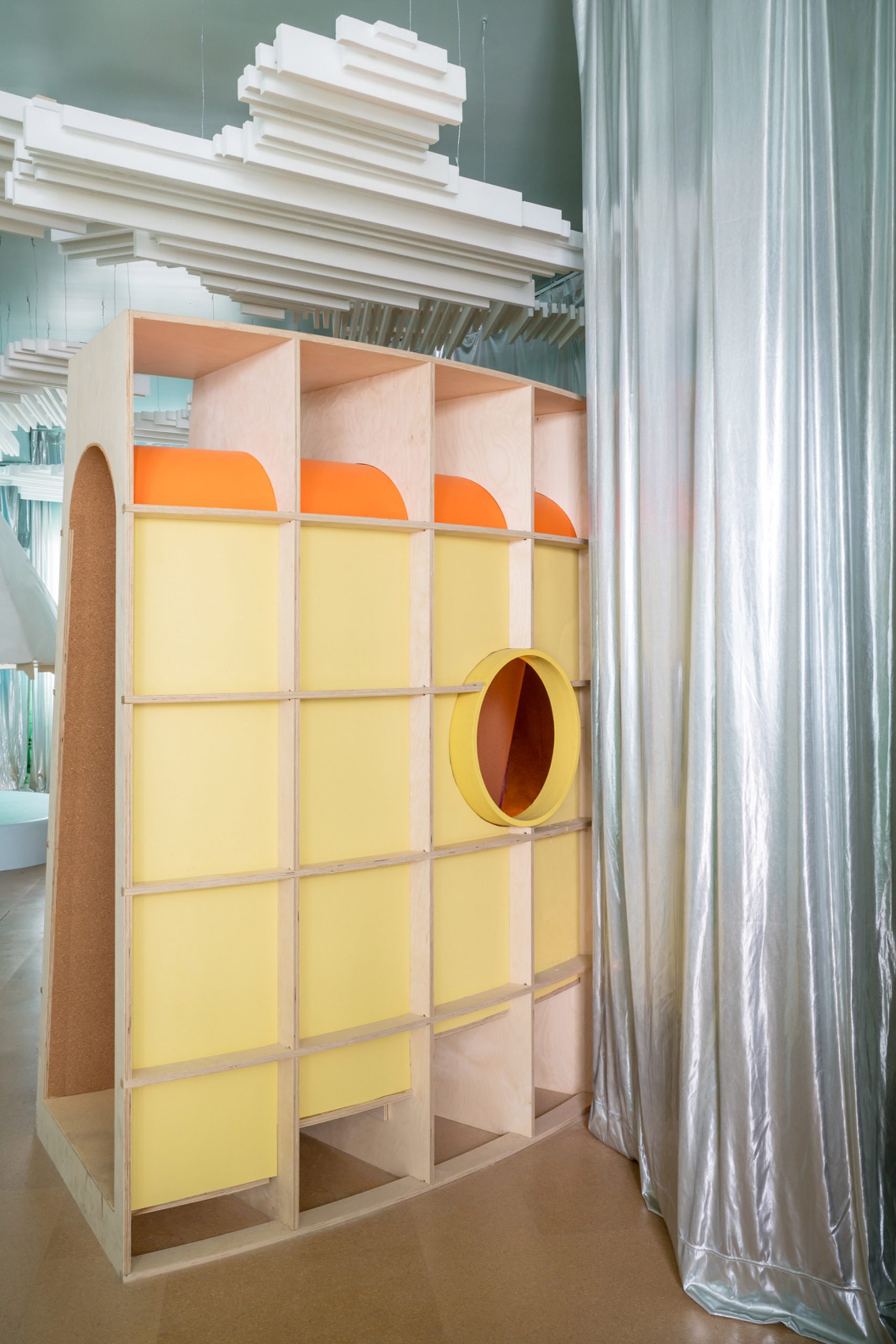 “The goal is to iconise the forms to make them recognisable and welcoming for the children,” Orsini added. “And, at the same time, to create inspiring spaces where they will always feel in control of their environments.”

‘This environment allows them to assume different body postures, to create boundaries, and to manipulate and re-invent their surroundings,” added co-principal Nick Roseboro. 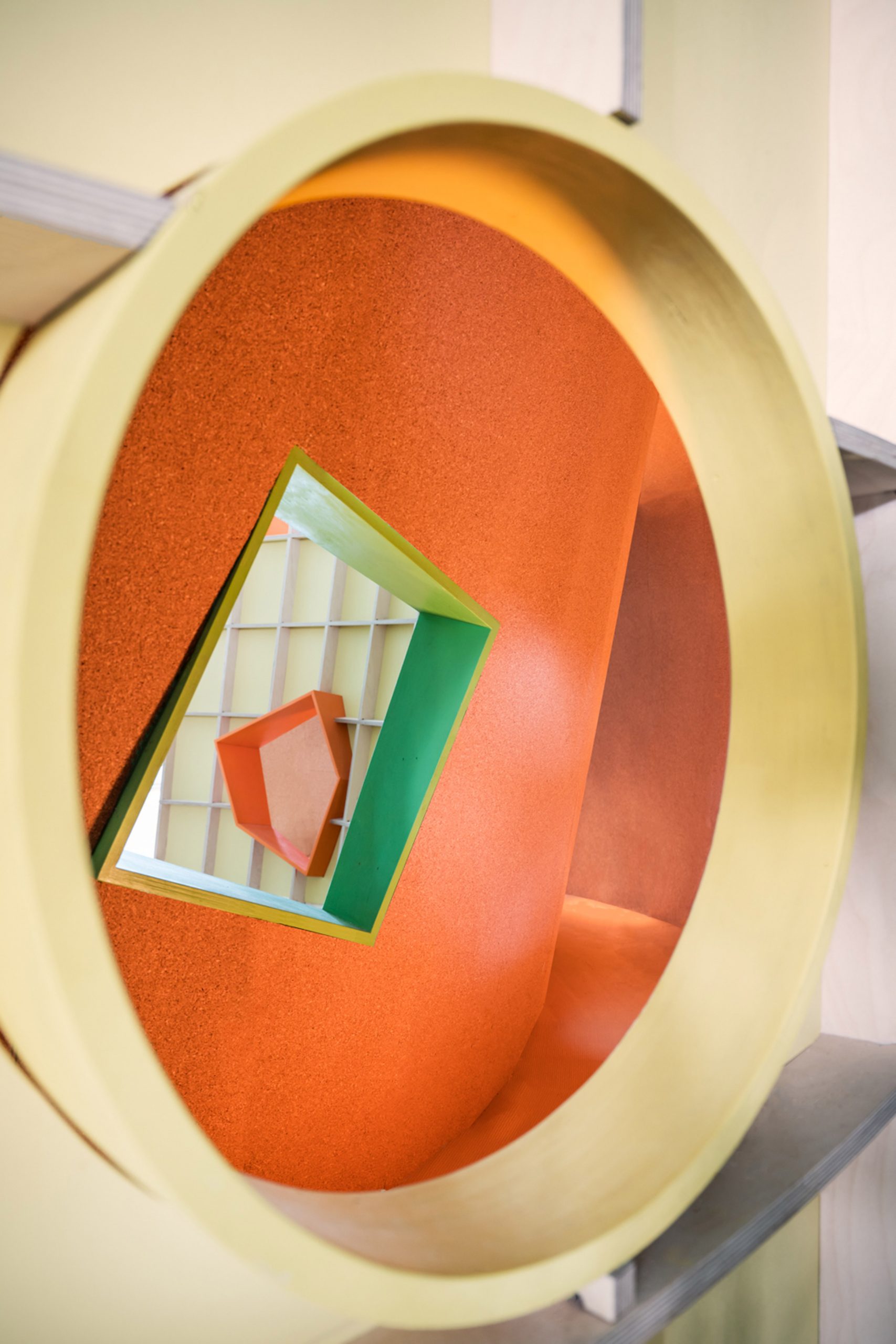 Other playgrounds recently completed by architects and designs with bold forms include a colourful playground in Madrid designed by Aberrant Architecture and an open-air space made of geometric structures by French designer Olivier Vadrot.

In Children’s Playspace, all the plywood is sanded and clear stained, ​and covered in non-VOC (volatile organic compounds) natural stain paint, in order to make it safe for the children. 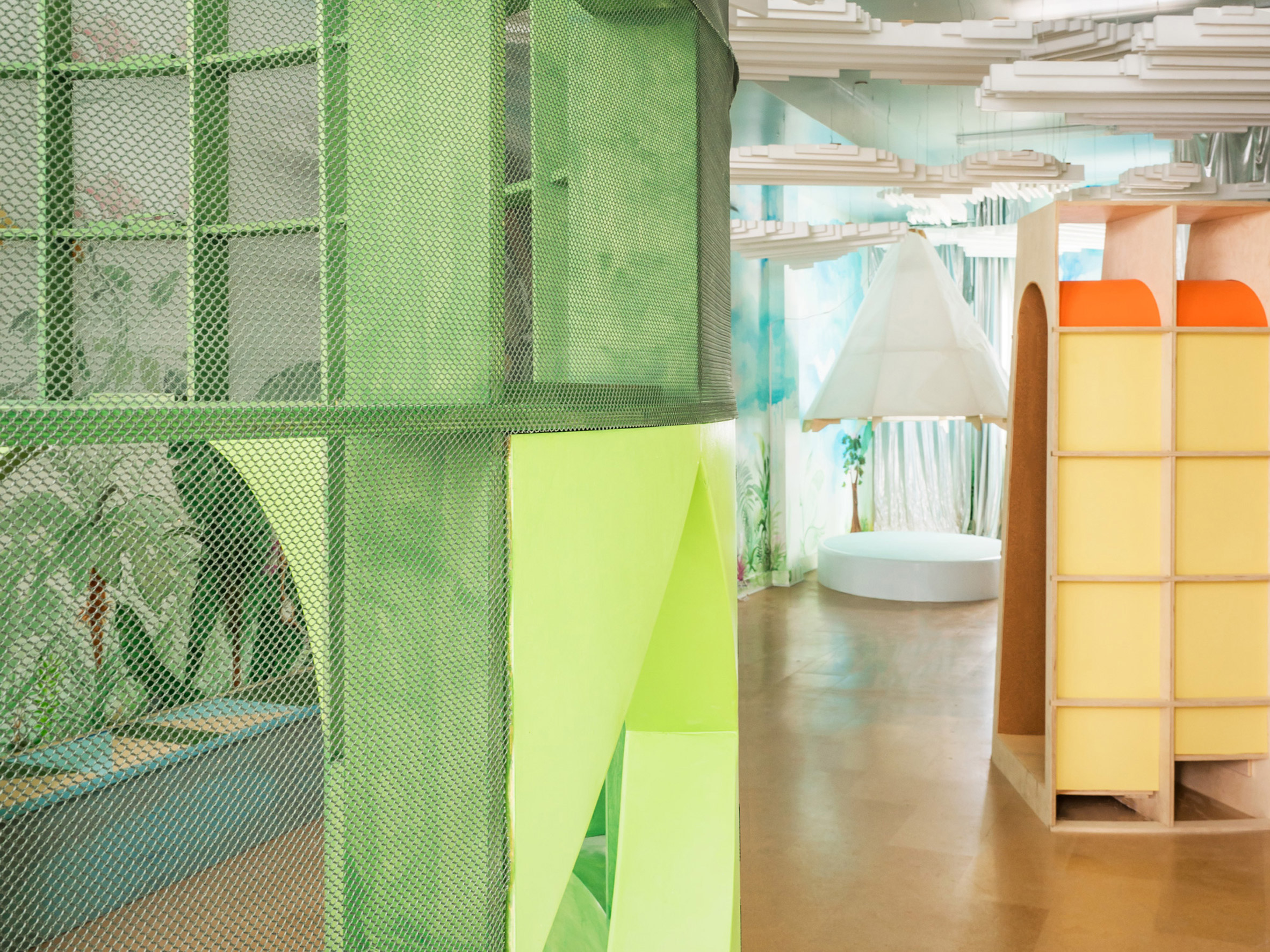 Three cloud-like structures made from slats of white-painted foam also hang from in the 875-square-foot (81-square-metre) playground, while a soft tan-coloured rubber floor was chosen to reference a forest floor covered in pine needles.

Some of the walls are draped with with a silky textile to look like water or sky, while another is covered in a mural of woodland.

Children’s Playspace joins a number of projects Architensions, which has offices in New York and Rome, has completed in New York borough Brooklyn. They include the renovation and extension of a Brooklyn townhouse and a tiny writer’s studio.

Photography is by Cameron Blaylock.