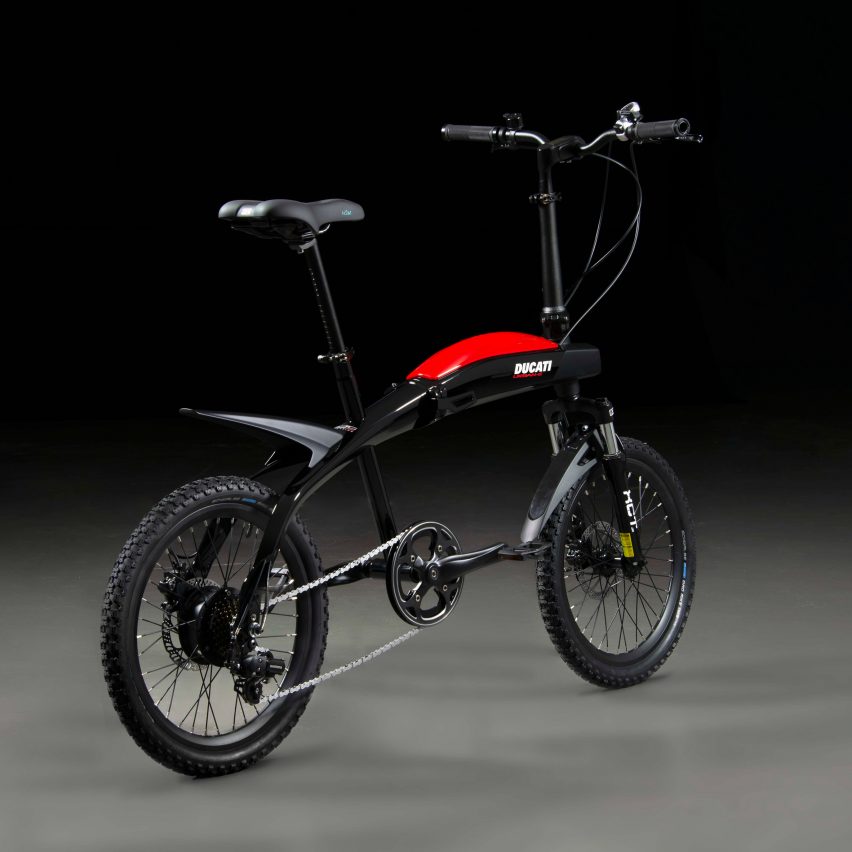 Italian manufacturer Ducati is launching three pedal-assisted electric bicycles, which can be driven off-road and folded down in a few steps for easy transport and storage.

The sleek, red and black Urban-E model was designed mainly for use in cities and created in collaboration with local company Italdesign, which previously worked with Airbus on its concept for a flying car.

Meanwhile, the SCR-E and SCR-E Sport models feature a sportier black and yellow design based on the brand’s flagship Scrambler motorcycle.

Thanks to the integration of suspension forks and extra “fat” tires, the bicycles fare well even on rougher terrain.

All three models can be compacted by vertically folding their frames and collapsing the headsets and handlebars off to one side, creating a unit that can fit into the boot of a car.

As the most design-focused out of the three products, the Urban-E bike features slim, pointed fenders and a headlight that is split in two around the front fork.

Its 378 Watt-hour battery lasts for up to 70 kilometres and is integrated into the aluminium chassis underneath a red plastic arch, in a nod to the brightly-coloured fuel tanks of Ducati’s motorcycles.

An LCD display in the handlebar can be used to check the battery charge and control the bike’s LED lights.

“Foldable e-bikes are more and more common as means of sustainable transport in cities,” said Nicola Guelfo, head of industrial design at Italdesign.

“We have inserted distinctive Ducati stylistic elements and adapted them to the structural and design requirements and to the typical purposes of a bike, and of course considering the users’ needs.”

Both the Urban-E and SCR-E models have a front suspension fork and wide, 20 by four-inch tires. These were designed to give vehicles the balance and grip they need to be driven off-road.

However, the SCR-E is designed for slightly more adventurous excursions, with an LCD display that is able to tell the external temperature and a light sensor that automatically switches on the bike’s headlights when needed.

In pursuit of a streamlined design, the 374 Watt-hour battery and tail light LEDs are integrated into the bike’s frame.

As an enhanced version of the SCR-E, the SCR-E Sport features full, front and rear suspension for maximum shock absorption as well as a more powerful 468 Watt-hour battery that allows the bike to travel up to 80 kilometres on a single charge.

These latest releases form part of an ongoing collaboration between Ducati and the e-mobility arm of Italian company MT Distribution, which recently saw the brand make its first foray into electric scooters.

A number of traditional automotive manufacturers have thrown their hat into the micromobility ring in recent years, releasing smaller electronic vehicles such as scooters and bicycles to capitalise on the growing demand for convenient modes of short-distance transport.

Last year, Korean car brand Hyundai unveiled a prototype for a foldable scooter that can be charged in its cars, while American motorcycle manufacturer Harley-Davidson launched a series of smaller, all-electric motorbikes for commuters.

Images are courtesy of Ducati unless otherwise stated.