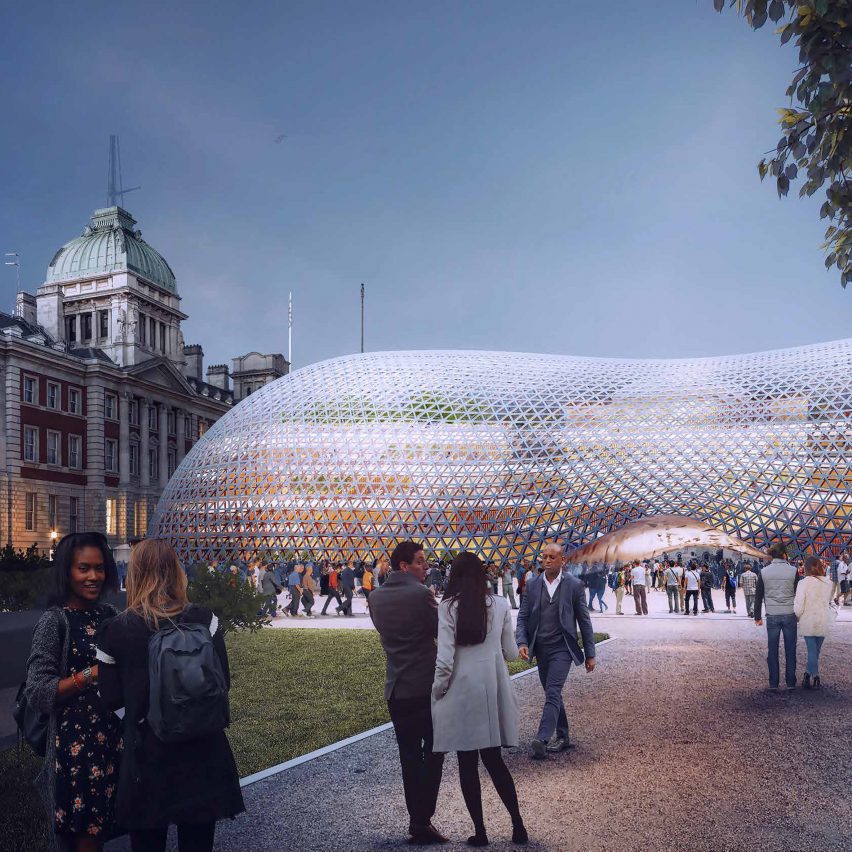 British architect Norman Foster has revealed plans for a demountable glass and steel building to house the UK government while the Houses of Parliament is renovated.

Created in partnership with property developer John Ritblat, the temporary building would contain an exact replica of the House of Commons along with offices for 650 members of parliament wrapped in a bomb-proof glass and steel shell.

It would be built around 400 metres from the Palace of Westminster on Horse Guards Parade and would be used while the 19th-century building is restored.

The structure was designed by Foster, founder of multiple Stirling Prize-winning studio Foster + Partners, at the request of the body in charge of restoring the Palace of Westminster as an alternative to Allford Hall Monaghan Morris’ plans for a temporary structure within Richmond House.

According to British newspaper the Times, Foster and Ritblat were asked to submit their design as part of a review into the overall costs of the restoration of the Palace of Westminster, including its temporary relocation.

The structure, which would cost £300 million and could be reused when the restoration is completed, was designed as a lower-cost alternative to the Allford Hall Monaghan Morris redevelopment of Richmond House.

“It saves a huge amount of money and time and is reusable,” Foster told the Times.

“It showcases what we can produce as a nation,” they continued. “Everyone regards the relocation of parliament as a huge problem, but it also presents an incredible opportunity and I can’t see any downsides to our proposal. Horse Guards is next to 10 and 11 Downing Street and is far more secure than Richmond House [in Whitehall].”

However, some architects criticised the sustainable nature of building a temporary structure rather than renovating Richmond House.

“The first rule of sustainability is to re-use and adapt an existing building; even more so if it’s a short-term use,” wrote Rab Bennetts, co-founder of architecture studio Bennetts Associates, on Twitter.

“Adapting Richmond House in Whitehall is the obvious responsible solution.”

Both proposals were created following the UK government’s decision in 2018 to relocate from the Palace of Westminster to allow the 1,100-room building to undergo a £4 billion restoration led by UK studio BDP.

Designed by Charles Barry and Augustus Pugin, the historic building was largely built between 1840 and 1870, with the oldest part, the Westminster Hall, dating back to 1099.

The restoration is planned to be carried out over six years starting in 2025, however, Foster believes his structure could be built in 28 months allowing members of parliament to relocate earlier.

“We think that, rather than a costly embarrassment, there is the potential here to create a uniquely great British solution that will enable the MPs to decant from the Palace of Westminster more than 36 months earlier,” said Foster and Ritblat alongside their submission.

“This is a great opportunity to celebrate British ingenuity”

The architect likened his building to Joseph Paxton’s glass and iron Crystal Palace, a structure that he told Dezeen in an interview was the “birth of modern architecture”.

“The sustainable solution we propose will not leave any permanent scars on the historic fabric of London and could be reused and relocated anywhere,” continued Foster and Ritblat in their submission.

“Much like the Great Exhibition did in 1851, we think that this is a great opportunity to celebrate British ingenuity with a solution that captures people’s imagination.”

Foster first proposed creating a “pop-up” parliament building on Horse Guards Parade in 2017, which would have contained replicas of both the House of Commons and the House of Lords and no offices. The updated proposal does not include space for the House of Lords.

In response, Foster called for a design competition for the northern House of Lords.

Since the UK government made the decision to temporarily relocate parliament several architects have proposed options, with US studio Gensler proposing a floating bubble-like structure that would be built alongside the Palace of Westminster on the River Thames.