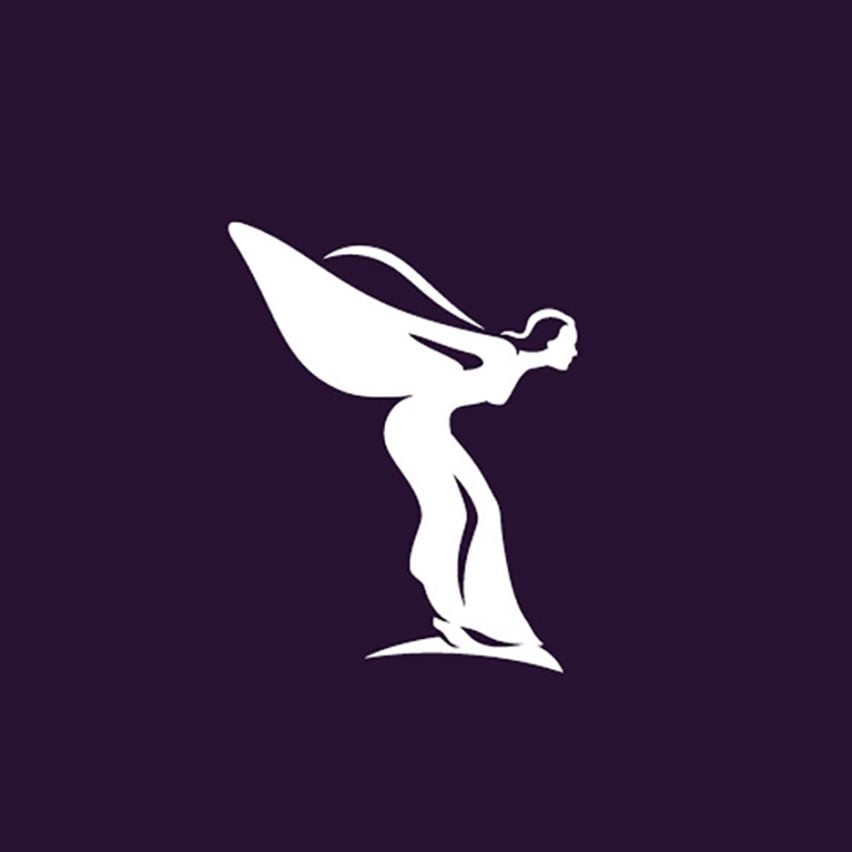 One year in the making, the new branding aims to modernise the Rolls-Royce Motor Cars company and differentiate it from the Rolls-Royce Holdings aerospace division, which owns the RR monogram.

Although the well-known double-R monogram was kept the same, Pentagram refined the wordmark and overhauled the iconic Spirit of Ecstasy emblem to become the face of the company.

According to Pentagram partner Marina Willer, “the whole intention” of the rebrand was to change Rolls-Royce’s reputation from simply a car manufacturer to a wider luxury lifestyle brand.

“The rebrand was much more about creating a confident but quiet style of luxury,” said Willer. “Not the idea of a corporate logo that would typically belong to a manufacturer, but much more of a lifestyle logo.”

Pentagram simplified the Spirit of Ecstasy symbol, which is a drawing of the three-dimensional metal statuette that features on the front of its cars, so that it would appear more clearly across physical and digital branding.

“It was too complex to be used on digital formats, and it didn’t feel modern or well balanced anymore,” said Willer about the former design. “So it was time we redrew it to make it feel like it was moving forwards.”

The updated logo will now lead the car company’s brand identity, replacing the chrome-effect double-R “badge of honour” previously used as the icon on digital platforms like Instagram.

The designers took the idea of “moving forwards” literally, flipping the previous Spirit of Ecstasy icon from left-facing to right-facing.

They also reduced the number of reflective marks and added a thin base under the figure’s feet, in a bid to make it clear that it is referencing the statuette and not an actual person.

Willer and her team paid close attention to physical attributes like the size of the figure’s waist, the shape of her wings and the detailing on her face.

“Things like the size of the waist were so important,” she explained, “because we didn’t want to indicate that she was too skinny, as that wouldn’t set a good example, and we didn’t want to make her too feminine and sexual either.”

The Spirit of Ecstasy icon has also been reproduced in a more abstract manner as an illustration that the studio likens to “a silken fabric”.

This was created by inputting various codes into a processor to create a pattern made up of multiple parallel lines that curve and overlap to form the shape of the female figure.

According to Willer, the illustration aims to give the impression of Rolls-Royce as a more forward-thinking and technologically connected brand.

“We wanted to convey this balance between a work of art that is special but is made with high degrees of technology and science behind the scenes,” she explained.

This pattern indicates a three-dimensional presence without actually having a “fake” 3D-effect design that aims to be a replica of the real thing, Willer said.

“Three-dimensional branding is a thing of the past,” she added. “But [the adoption of flat design] is not even to do with trends.”

“We felt that we weren’t doing any justice to the badge of honour by copying it with some fake, 3D effect – that should be saved for the real thing, and the same with the Spirit of Ecstasy,” she continued.

The team also overhauled the company’s wordmark, aiming to create a more refined and “future-facing” version of the existing design.

This included changing the typeface from Gil Sans Alt to a similar font, called Riviera Nights, which features bevelled ends to the letters L and E to give an indication of movement.

Each of the letters has been capitalised and the R’s have been enlarged to offer a more instant visual connection with the monogram.

Pentagram decided to leave the double-R monogram unchanged, however, because of its “incredible heritage”.

“We didn’t feel it was appropriate to change it,” said Pentagram partner Marina Willer.

“We did experiment with it a bit, but felt it would always look like we were trying to produce some kind of fake version of it because it is so valued and recognisable.”

Rolls-Royce’s new visual identity will come into effect from 1 September 2020.

Another company Pentagram recently worked to “future-proof” was Thames & Hudson. The design studio created a new wordmark and a modernised version of the publishing house’s original cartouche from when it was founded in 1949.

The designers wanted to establish Thames & Hudson as a “forward-thinking” global company while still honouring its 70 year-long history.