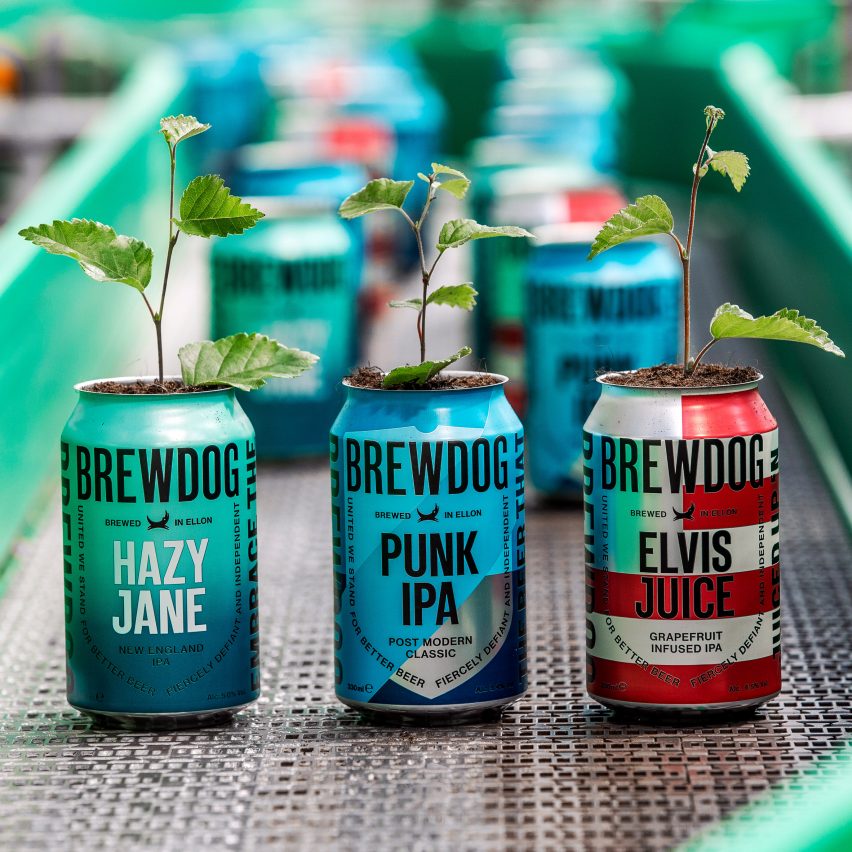 Beer company BrewDog has gone carbon negative by switching to wind power for its breweries and bars, with plans to plant a forest’s worth of trees.

BrewDog became carbon negative as of last Saturday, a representative confirmed to Dezeen. The company claims its changes have made it the “world’s first carbon-negative international beer business”.

Carbon negativity is achieved when a business or individual removes more carbon from the atmosphere than they put in.

As well as wind, BrewDog’s breweries are also powered by leftover grain from the brewing process that is turned into gas. The multinational craft beer brand is in the process of switching to electric vehicles for its deliveries.

BrewDog’s founders insisted that going carbon neutral was not enough given the state of the climate emergency.

“Our carbon. Our problem. So, we are going to fix it ourselves,” said BrewDog co-founder James Watt.

“Huge change is needed right now, and we want to be a catalyst for that change in our industry and beyond,” he added.

The company was able to go carbon negative by switching to more sustainable energy sources, and it is planting a BrewDog forest as part of a longer-term goal to remove twice as much carbon from the atmosphere as the business puts in.

BrewDog has purchased 2,050 acres of land in Scotland and is planning to plant it with trees.

The site, near Loch Lomond in the Scottish Highlands, will be turned into 1,400 acres of broadleaf forest, with the remaining 650 acres given over to restored peatland. The trees and peat will remove and sequester carbon from the atmosphere and provide a natural habitat for wildlife.

“Woodland creation of this scale is at the forefront of the fight to sequester atmospheric carbon in the UK,” said director of Scottish Woodlands David Robertson.

“The BrewDog Forest will be one of the largest native woodlands created in the UK for many years,” he added.

Work is due to start on the forest in 2021, with the company’s investors invited to help in the tree-planting programme.

BrewDog also has plans to build a campsite in the forest to host sustainability retreats and workshops.

In total, BrewDog plans to invest £30 million in its green infrastructure plan.

“We fully acknowledge that we are a long way from perfect,” said Watt. “However, we are determined to rapidly and fundamentally change everything as we work hard to ensure we have a positive impact on the planet.”

BrewDog was founded in Scotland in 2007 by Watt and Martin Dickie, and is part-owned by American private equity firm TSG Consumer Partners.

Other companies that have pledged to become carbon negative include Microsoft, which aims to achieve its goal in 2030. Apple has committed to becoming carbon neutral in the next decade.