Layer has designed a seat for social distancing in cinemas called Sequel that is knitted from antibacterial copper threads coloured in the “mid-century pastels” featured in Wes Anderson films.

The Sequel Seat is a premium cinema seat that aims to encourage people to return to movie theatres after the coronavirus pandemic by integrating a series of hygiene features into its fabric and structure. 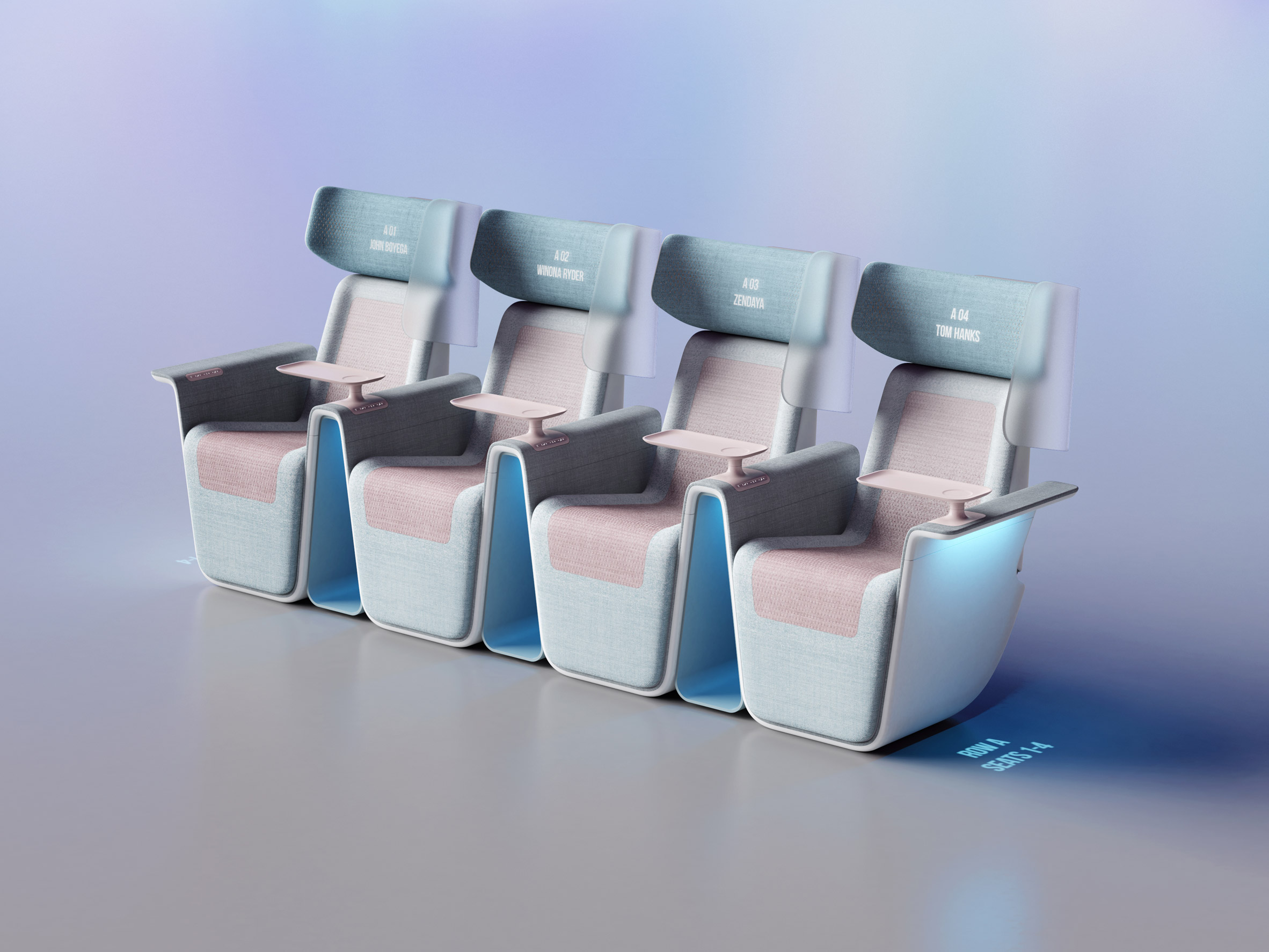 This includes a 3D-knitted fabric upholstery that integrates fibres impregnated with copper oxide, granting it antibacterial, antiviral and antifungal properties, according to the studio.

In addition to being stain and water-resistant, this upholstery is also designed to eliminate any crevices that could act as dirt traps. 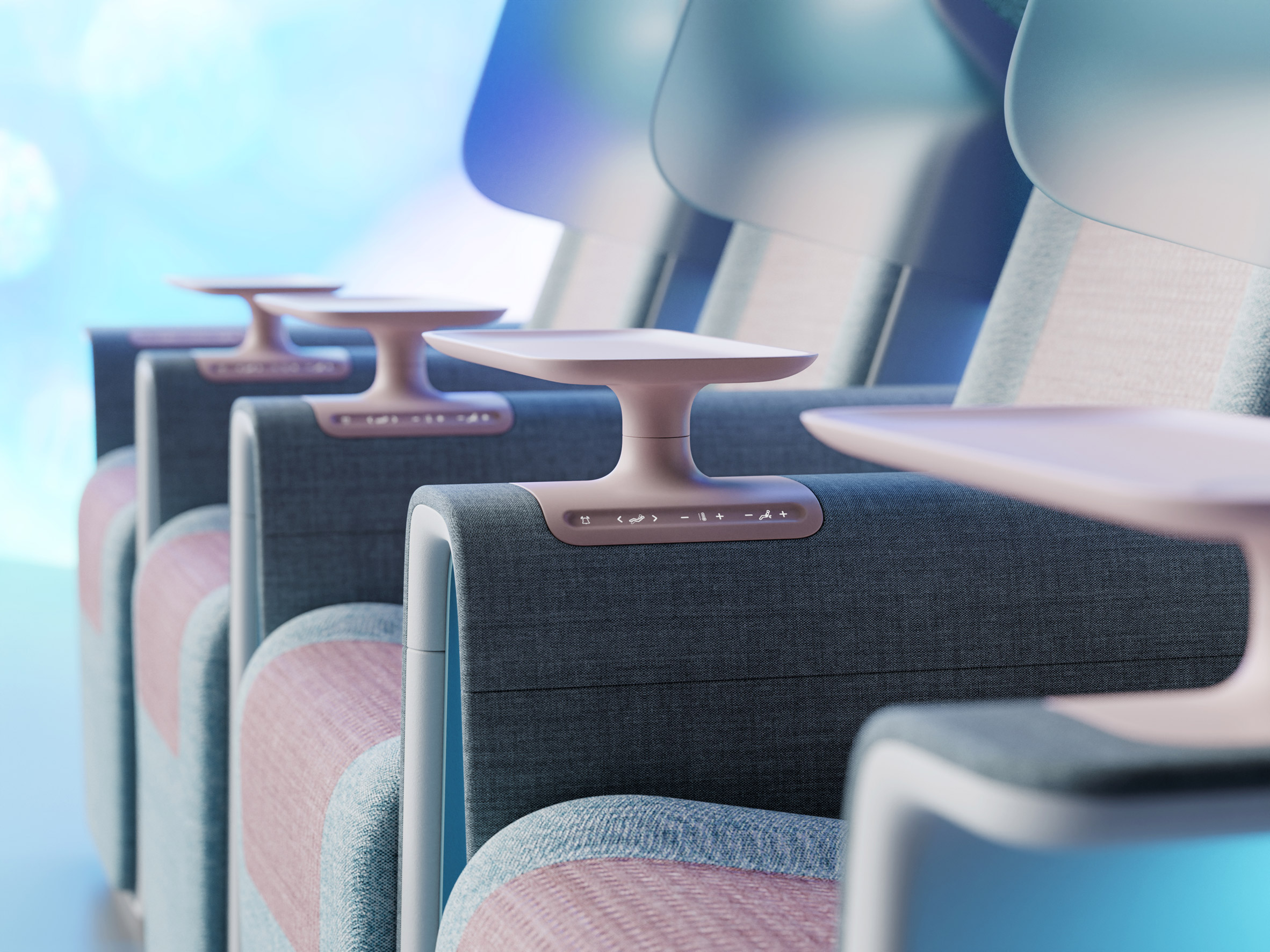 This gives the seat “a connection to the world of cinema” as well as distinguishing it from the black and red tones typically seen in cinemas.

The seats are modular and can be arranged into rows of any desired length, making them suitable for different cinema sizes and configurations. 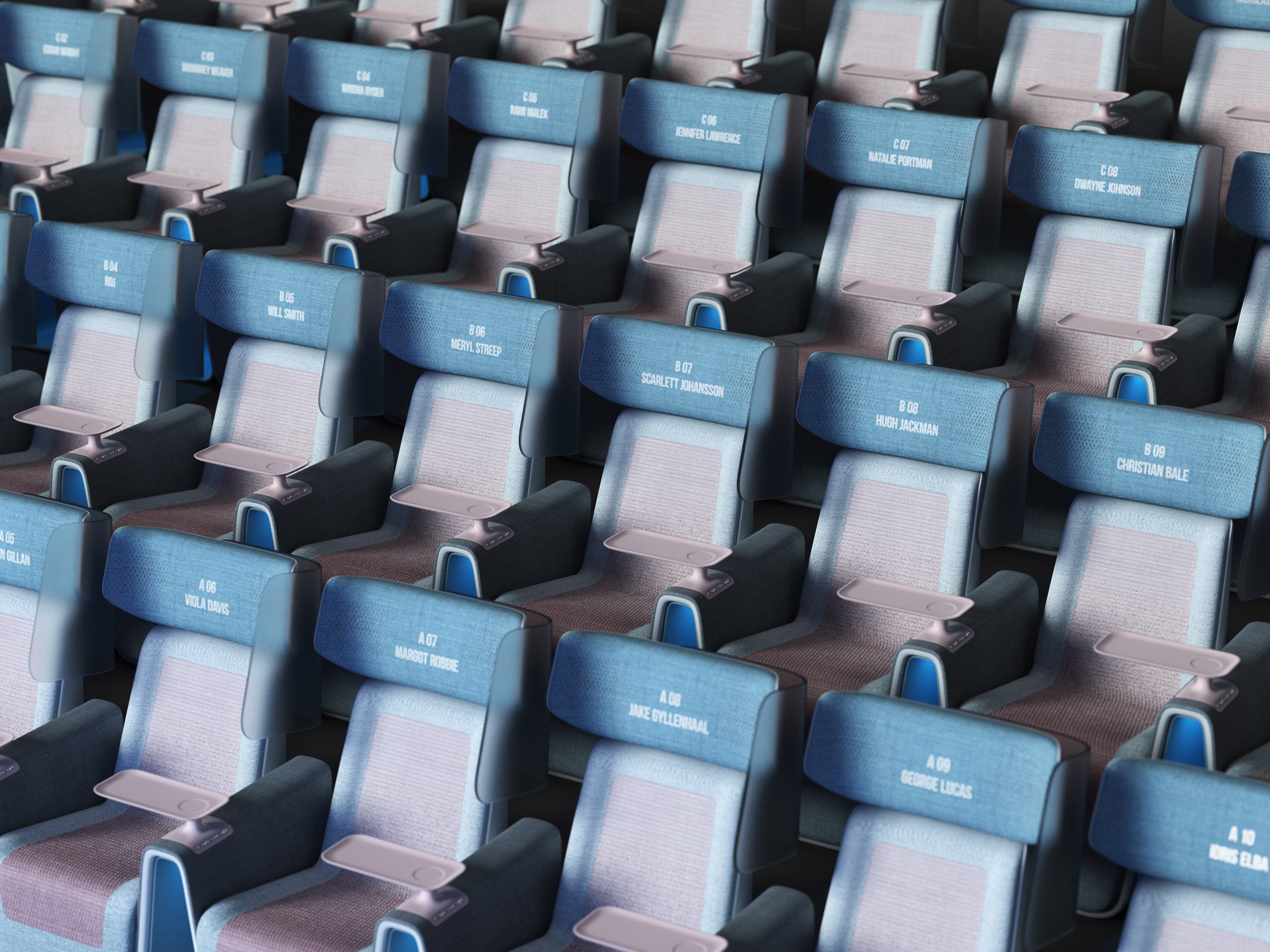 LED lights would project the row number onto the floor and are also embedded into the headrests, displaying the seat number and the name of the person who reserved it to avoid audience members accidentally breaching social distancing measures by sitting in the wrong seat.

The headrests also include integrated speakers to create an “immersive audio experience” for the viewer.

Each seat features a protective screen that can be used to provide a barrier between each member of the audience. These are removable, making the design more adaptable when such measures are no longer needed. 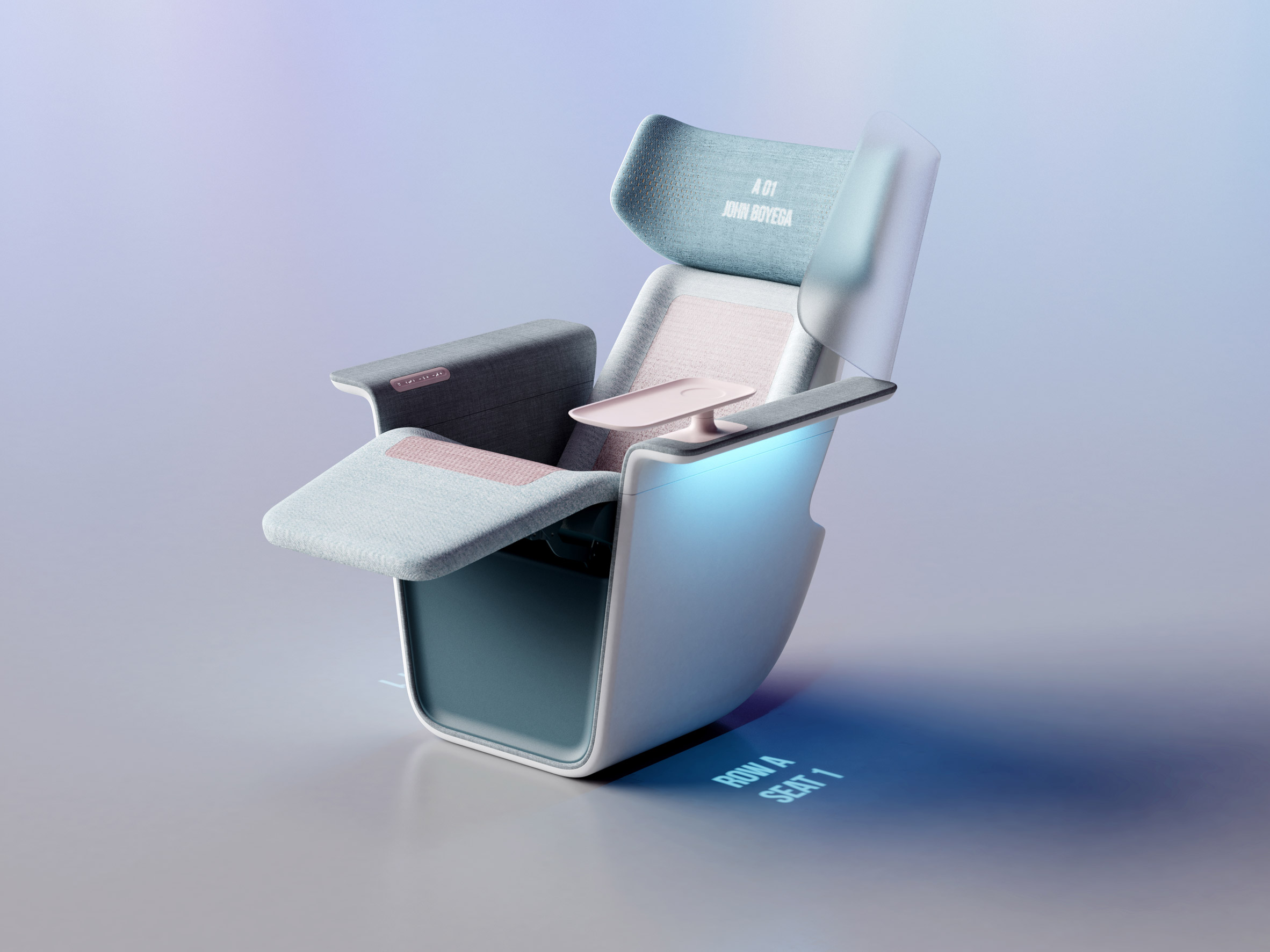 “It is currently predicted that the global box office could lose $10 billion due to the pandemic,” said Layer. “Sequel Seat offers the opportunity for cinemas to transform the cinema experience for moviegoers and tackle these challenges in a meaningful way.”

“We believe that a product like Sequel Seat will play a key role in encouraging people to come back to the cinema,” added Layer founder Benjamin Hubert.

“In today’s rapidly evolving entertainment landscape, it is essential for the cinema to offer an experience that is significantly differentiated from the growing streaming market,” he continued.

“Sequel Seat is a tool that delivers the enhanced comfort and essential safety features that will help cinemas define themselves as a safe place where moviegoers can be transported to another world.” 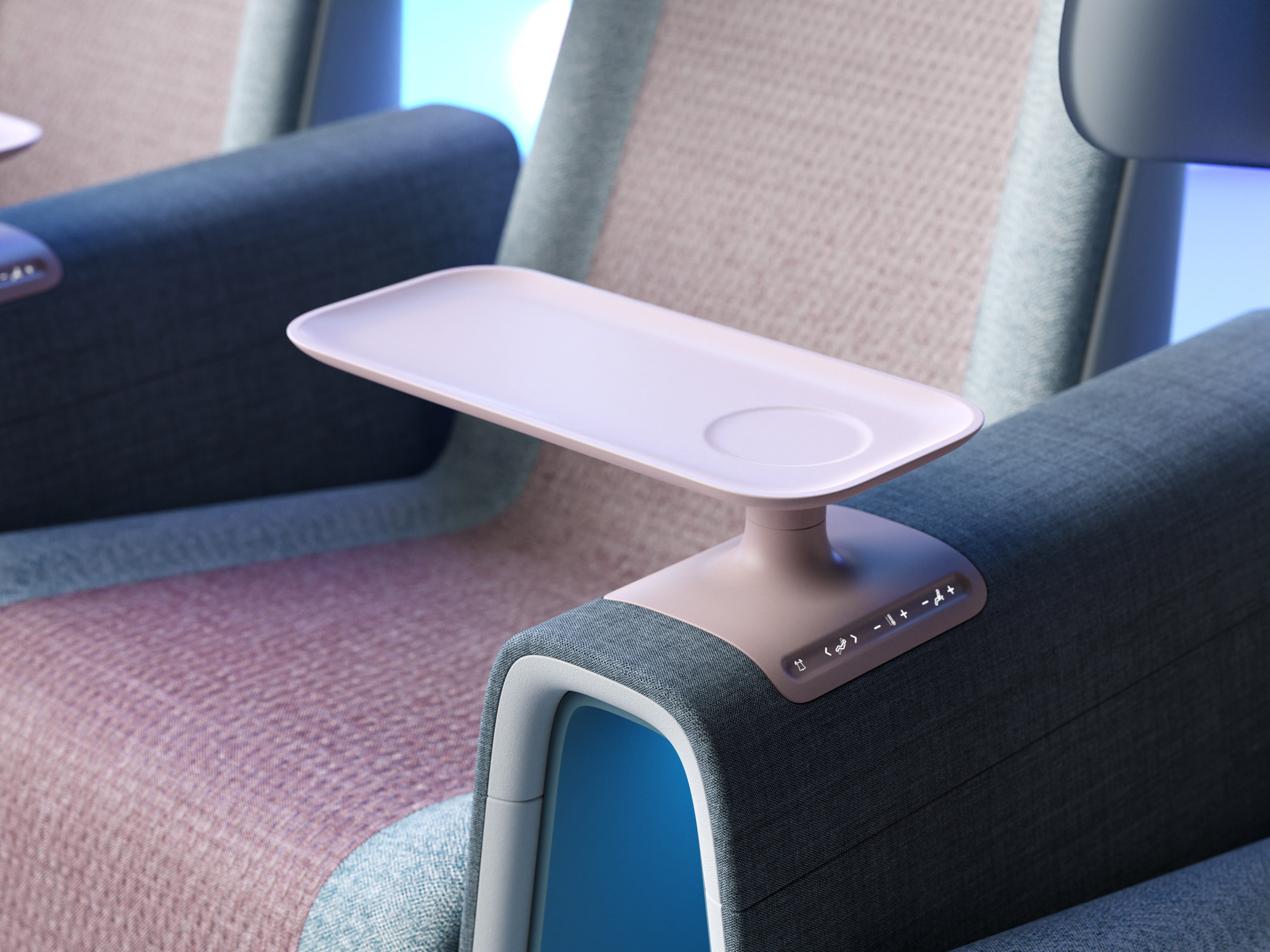 Other features include a swivelling side table made from polymer that has a cup-holder dish and space for food.

Each seat can be reclined or fully extended using a control panel in the armrest, which can also be used to adjust lumbar support and control the temperature of the seat. 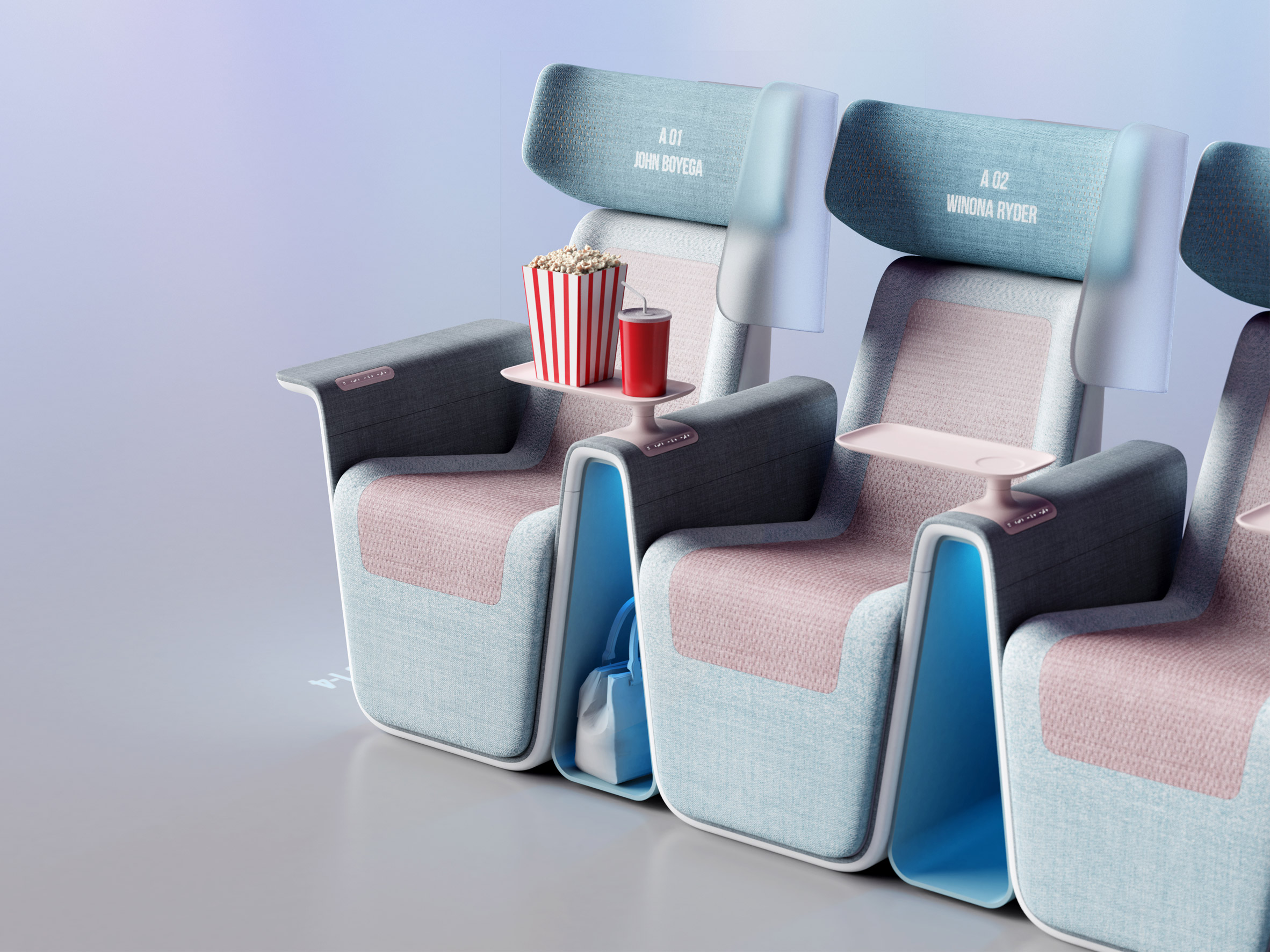 The space created by the upside-down V-shape of the joining armrests acts as a storage unit for bags and jackets, keeping belongings out of the aisle to avoid any accidents.

A built-in UV light sterilises the belongings when they are placed inside using Ultraviolet Germicidal irradiation (UVGI), which the studio describes as “lethal” to microorganisms such as viruses and bacteria.

UV lights are also included on the rear of each seat to sterilise the seat behind it in-between film screenings. Layer has previously designed smart seating concepts for cars and airlines. The Joyn platform for vehicles consists of two rows of eight modular seats set in S-shaped pairs that face opposite directions to maximise each individual’s privacy.

While the Move seating concept for Airbus features a smart textile that would allow passengers to monitor and control their seat conditions using their phone.