One building is entirely closed to the public in order to preserve the interior pump, which brings water in from a nearby lake using a system of underground pipes, and the water filtration system through which it is purified. 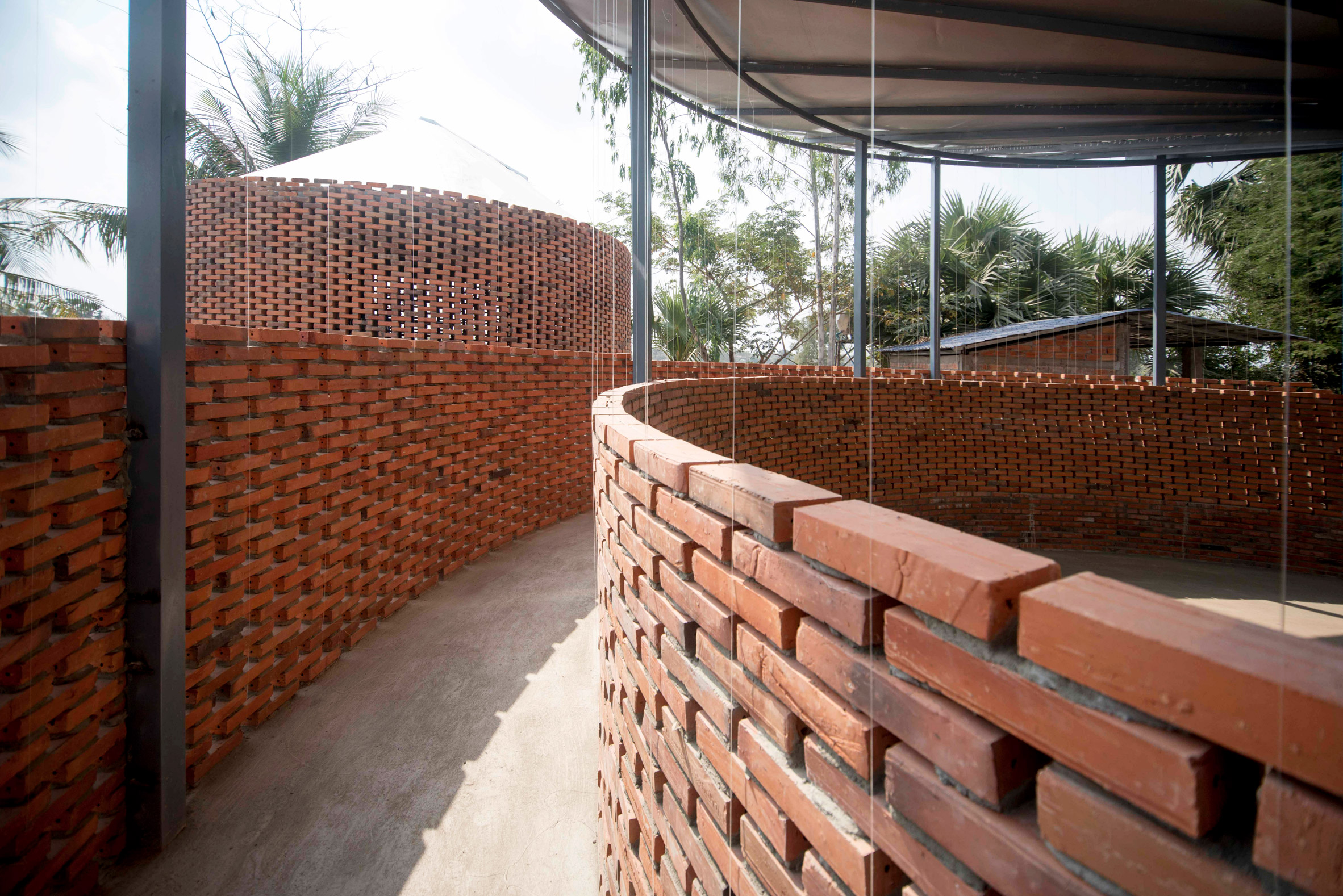 The other building is an open hall, with an inner and outer half-wall, and a concave metal roof supported by concrete pillars. This was designed to funnel rainwater into a traditional ceramic vessel at the centre of the structure.

Its concrete floor is recessed to create a kind of simplified amphitheatre that provides locals with a space for gatherings and community festivities. 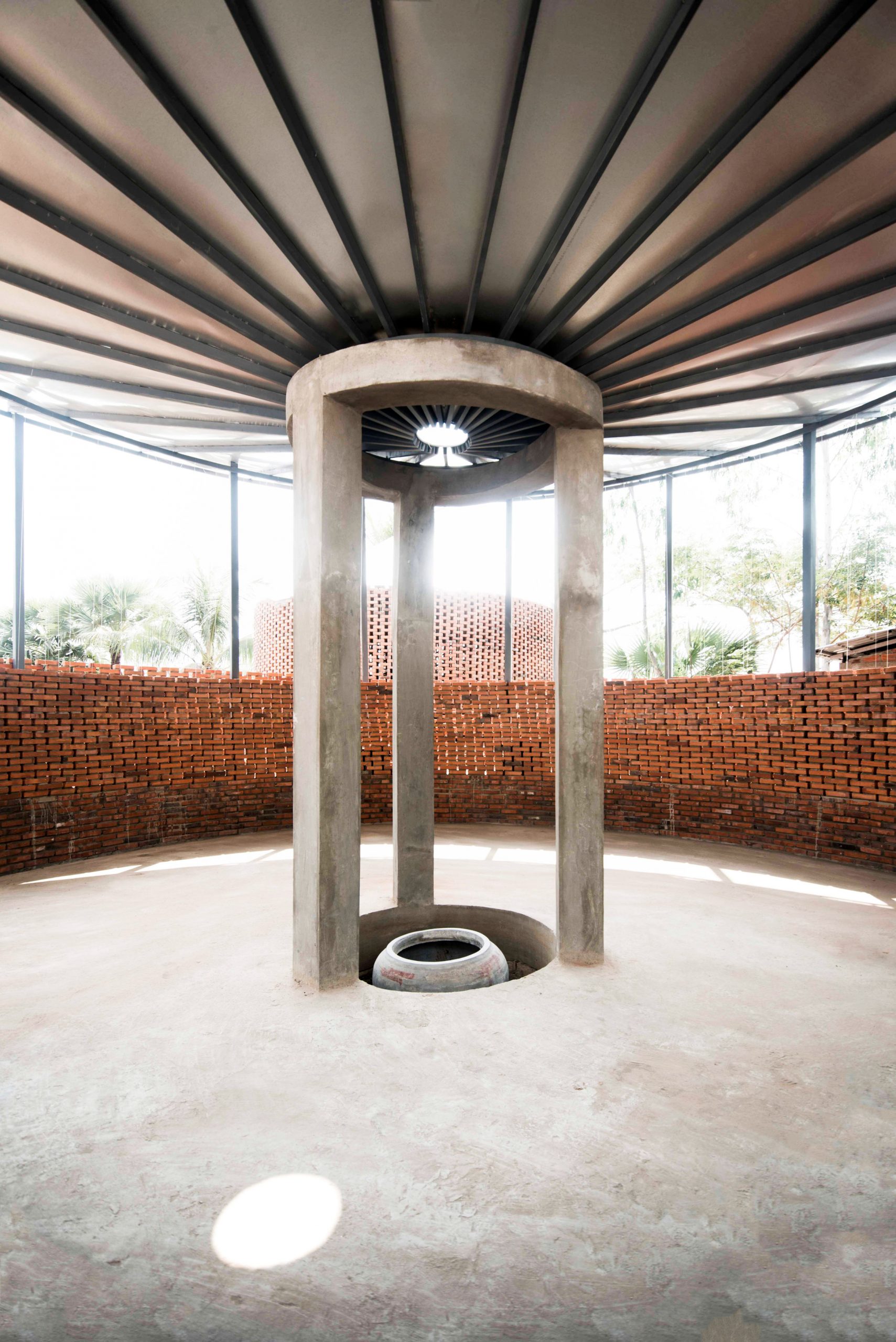 The aim is to create a more reliable supply of drinking water for the local community, which, according to Orient Occident Atelier, has so far been entirely reliant on polluted wells and a nearby lake that is dry for half of the year.

Cambodia has been identified as one of the countries that is most vulnerable to the effects of global warming, with shifting rainfall patterns causing longer droughts, shorter rainy seasons and occasional flash floods that threaten the water security of its people.

WaterHall hopes to diversify Sneung’s water supply by providing fresh rainwater that can be scooped up using ceramic jugs as well as filtered lake water, which is pumped into a series of taps embedded into the open brickwork.

This way, each reserve can step in when the other fails. The studio also hopes that going forward, the project can influence the community to use fewer plastic bottles. 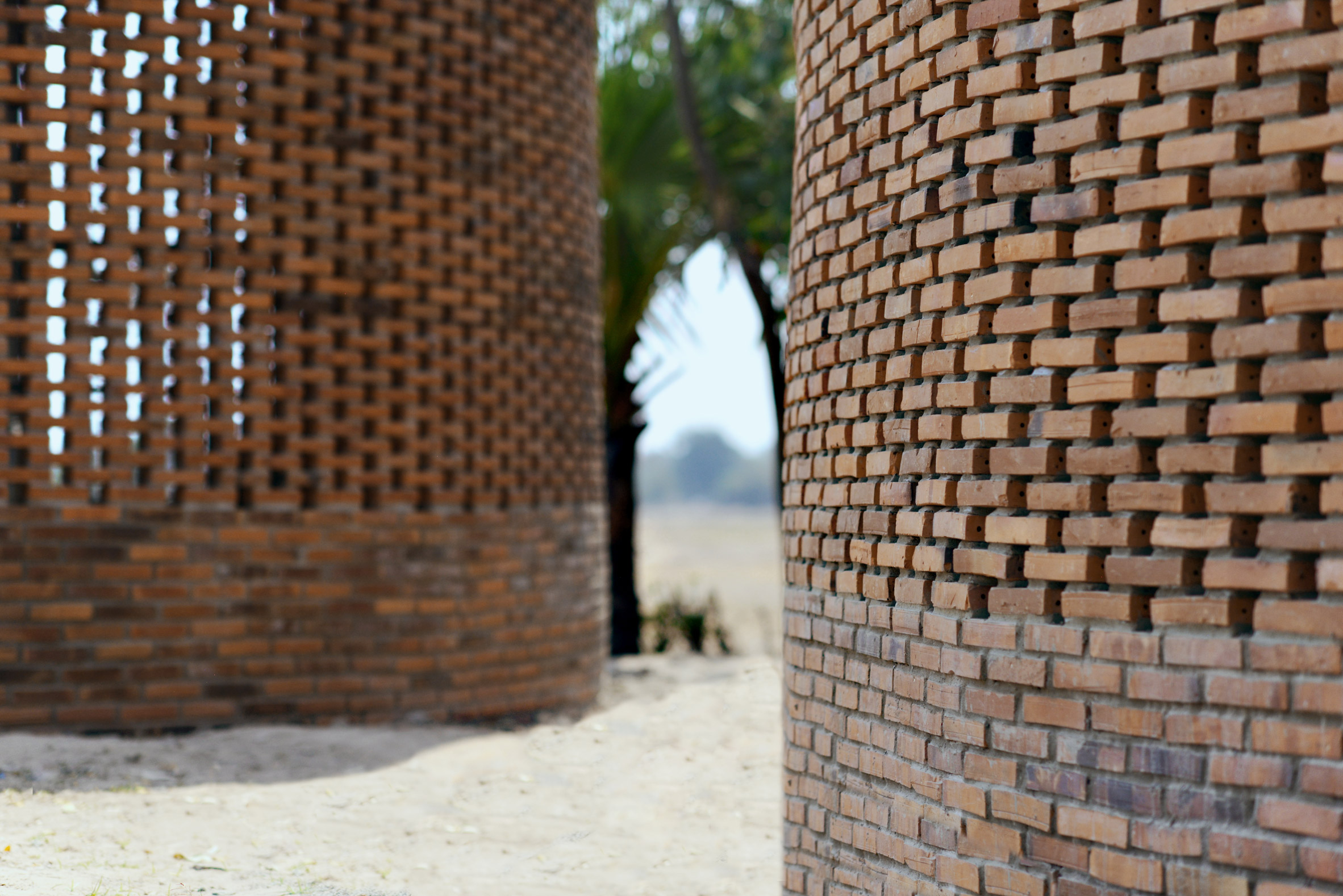 On an aesthetic level, the project is based on the idea of unifying modern architectural shapes with native building materials and handicraft, in a bid to create an architecture that is responsive to its context.

“We physically utilised these vessels in our build as basins and jugs to collect rainwater, as well as conceptually drawing on their shape to influence the shape of our buildings.” 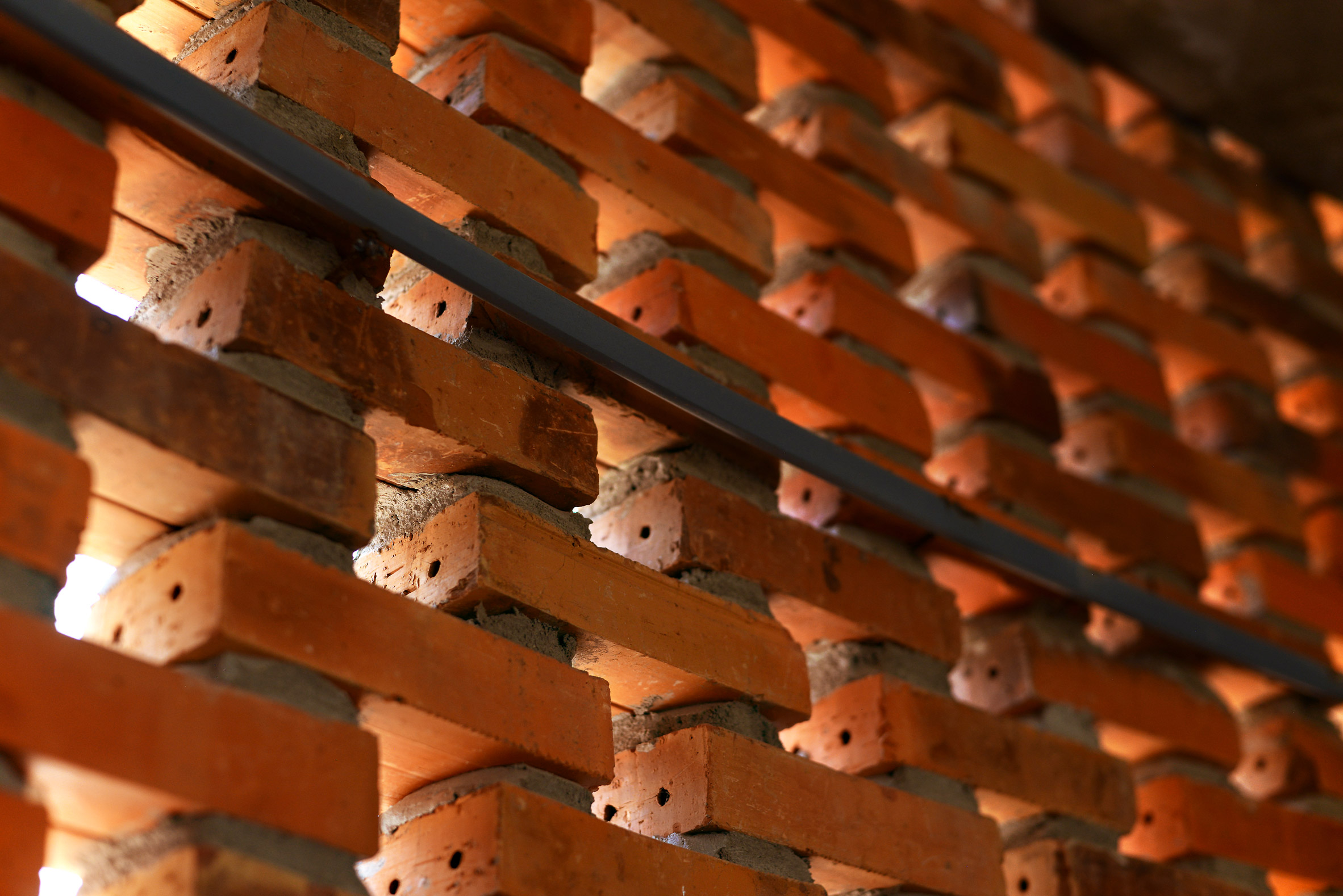 The WaterHall project has been longlisted for a Dezeen Award in the Small building category this year, with shortlists set to be announced at the start of September.

This comes after Adventurous Global School, another project built by OOA in Sneung, was shortlisted in the same category last year.

The duo’s work in Cambodia, as well as on other charitable architecture projects, has made them acutely aware of the importance of working in tandem with the local community rather than parachuting in solutions from the outside.

“Doing in-depth and long term community visits, research and evaluations is important in order to understand the actual needs of a community, while building friendships and setting goals together with the locals,” said Kwan.

“It’s important to let everyone be involved and enjoy the process. That’s why construction could be defined both in terms of the physical structure as well as more intangible qualities.” 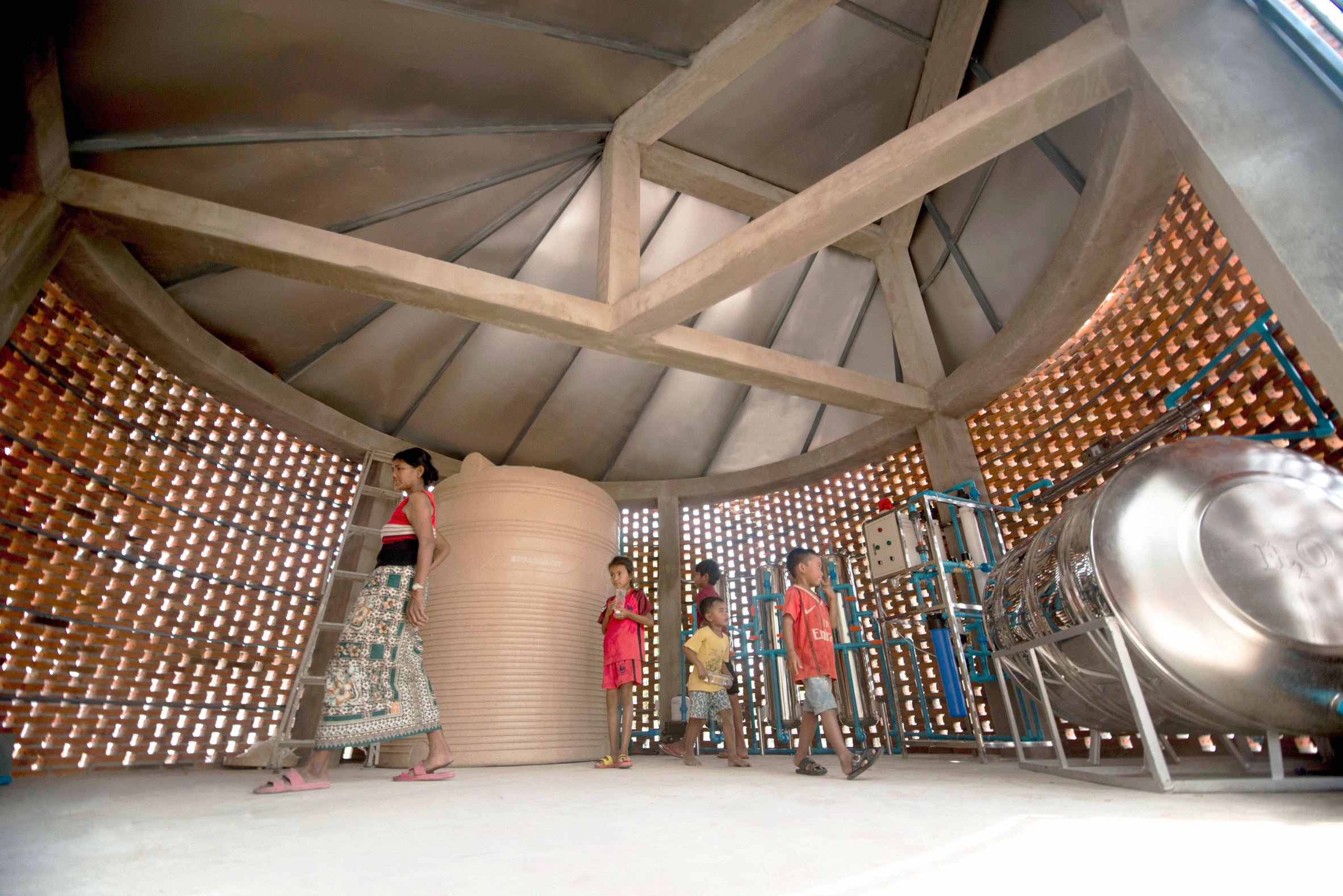 For the WaterHall project, Kwan and Wong took it upon themselves to secure the funding for the project, including from the Hong Kong Institute of Architects (HKIA) Community Project Fund.

Since then, they have set up a registered charity in the hopes of attracting more funding for future humanitarian projects. 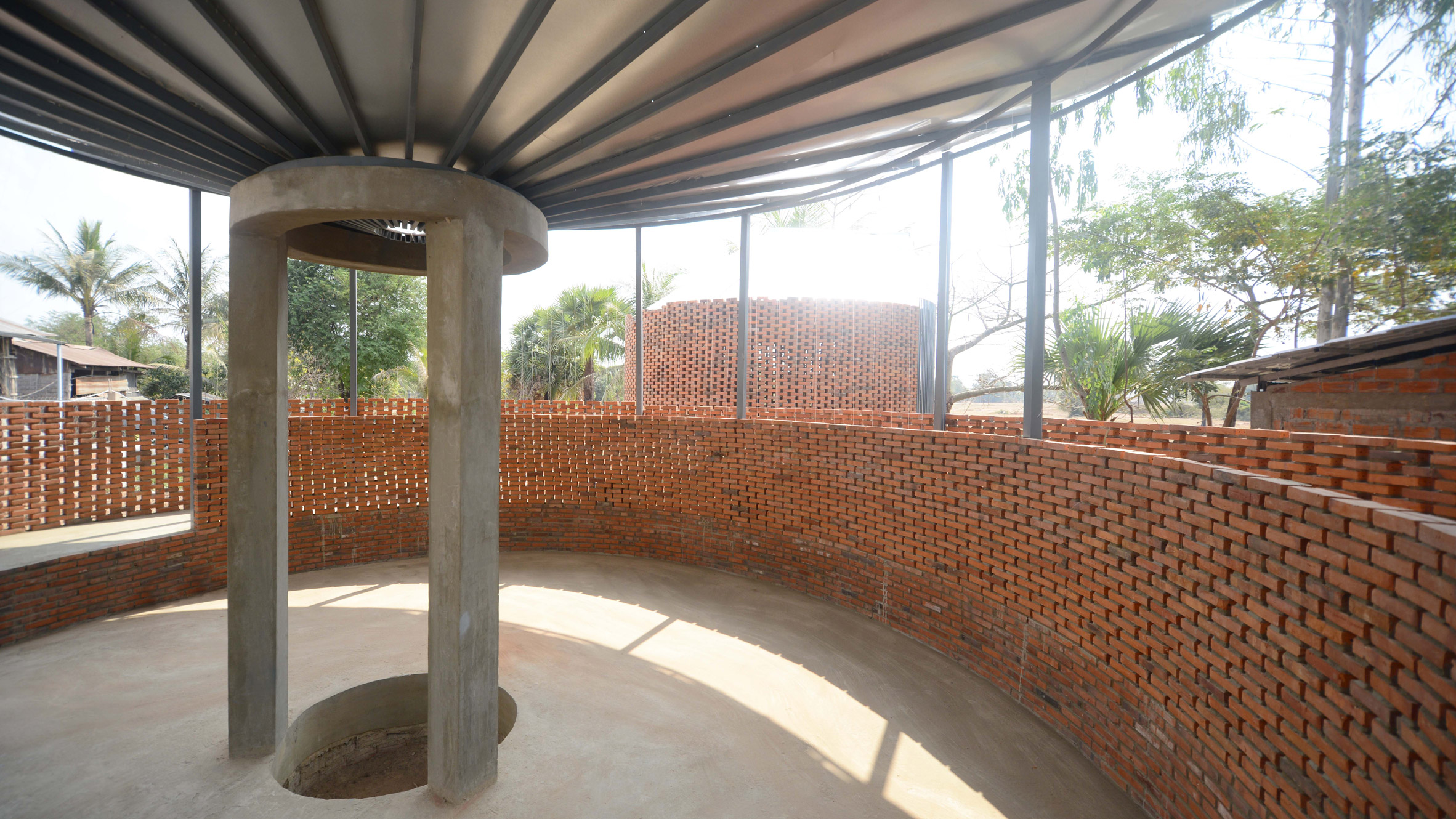 With the water security of about 80 per cent of the world’s population already under threats due to climate change and pollution, a number of architects and designers have turned to water harvesting as a possible short-term solution.

BMDesign Studios has created a proposal for a series of a residential building in Iran with sculptural concave roofs to collect rain, while South African designer Shaakira Jassat developed wall panels that enable harvesting even in dense urban areas.