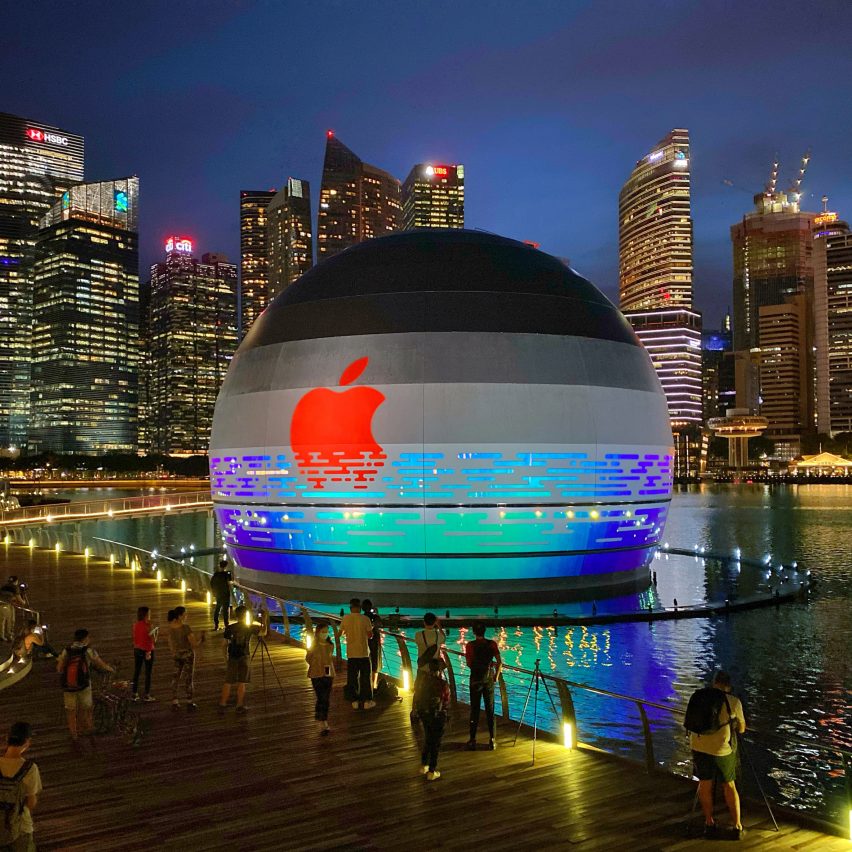 Instagram users have posted images of the soon-to-open spherical Apple Store in Singapore, which architecture studio Foster + Partners has built on the water alongside the Marina Bay Sands hotel.

The images show the globe-shaped store within Singapore’s Marina Bay near the Moshe Safdie-designed Marina Bay Sands complex. The store is completely surrounded by water so that it appears to be floating.

Officially called Apple Marina Bay Sands, the store is set to open soon according to the technology company.

“We will soon open the doors to our new store by the bay,” said Apple.

“Apple Marina Bay Sands will be at the heart of creativity, a place we’ve made for you to capture your ideas and passions. It will be a space for you to explore, connect and create something new. We can’t wait to see where your imagination takes you.”

Designed by London studio Foster + Partners, the store will be Apple‘s first spherical shop and the first surrounded by water.

When it opens in the next couple of weeks, it will be entered by a footbridge from the waterfront promenade. An underwater passage will also connect it to the shopping centre at the base of the Marina Bay Sands complex, which opens in 2011.

The structure replaces a building designed by Moshe Safdie as part of the original Marina Bay Sands complex. The geometric, glass-covered building was previously home to the Avalon nightclub.

It was one of two “crystal pavilions” that were “conceived as a pair of transparent islands floating on the water”.

The other pavilion still stands and contains a Louis Vuitton store.

The shop will be the third Apple Store to open in Singapore. The tree-filled store in the city’s downtown area, which features hand-carved stone staircases, was also designed by Foster + Partners. The city state’s other store is located with the Jewel Changi Airport, which like Marina Bay Sands, was designed by Safdie Architects.

The latest shop is one of numerous Apple Stores designed by the architecture studio for the technology company. Recently completed stores include a shop topped with a wavy white concrete roof in Miami and a store built around a tree-like column in Bangkok.