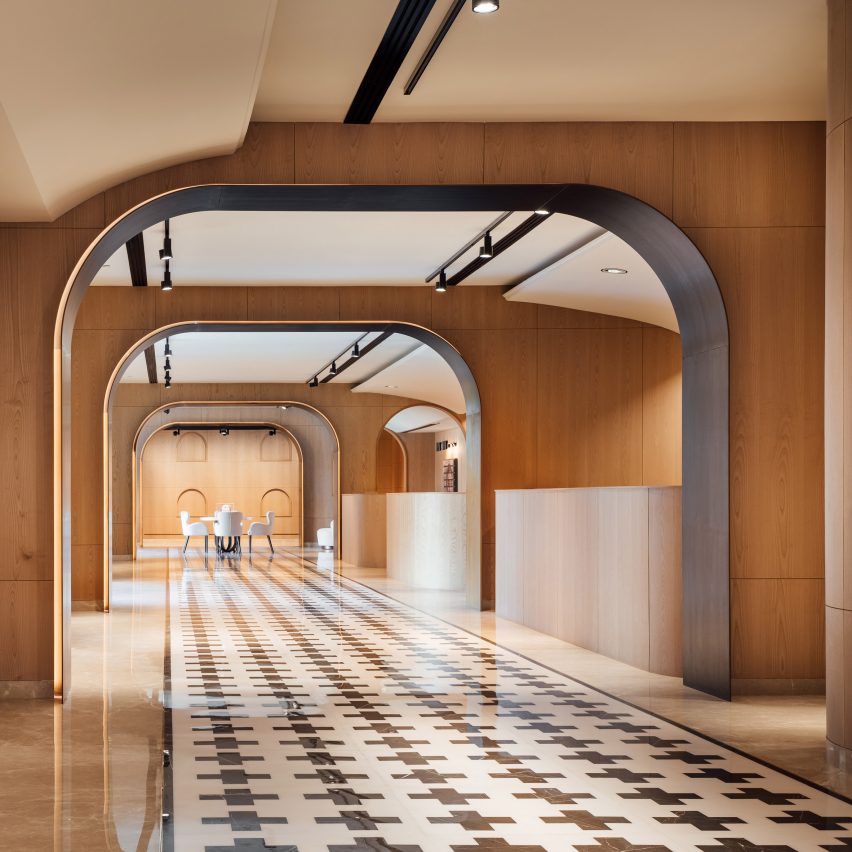 Iram Sultan was tasked with designing the 20,000-square-foot office floor belonging to the chairman, managing director and director of leading pharmaceutical company Zydus Cadila, which is located in Gujarat on the western coast of India.

The studio wanted the interior spaces to reflect the work that the firm does. Each room’s structure has therefore been based on the shape of tablets and pills, symbolising pharmaceuticals. 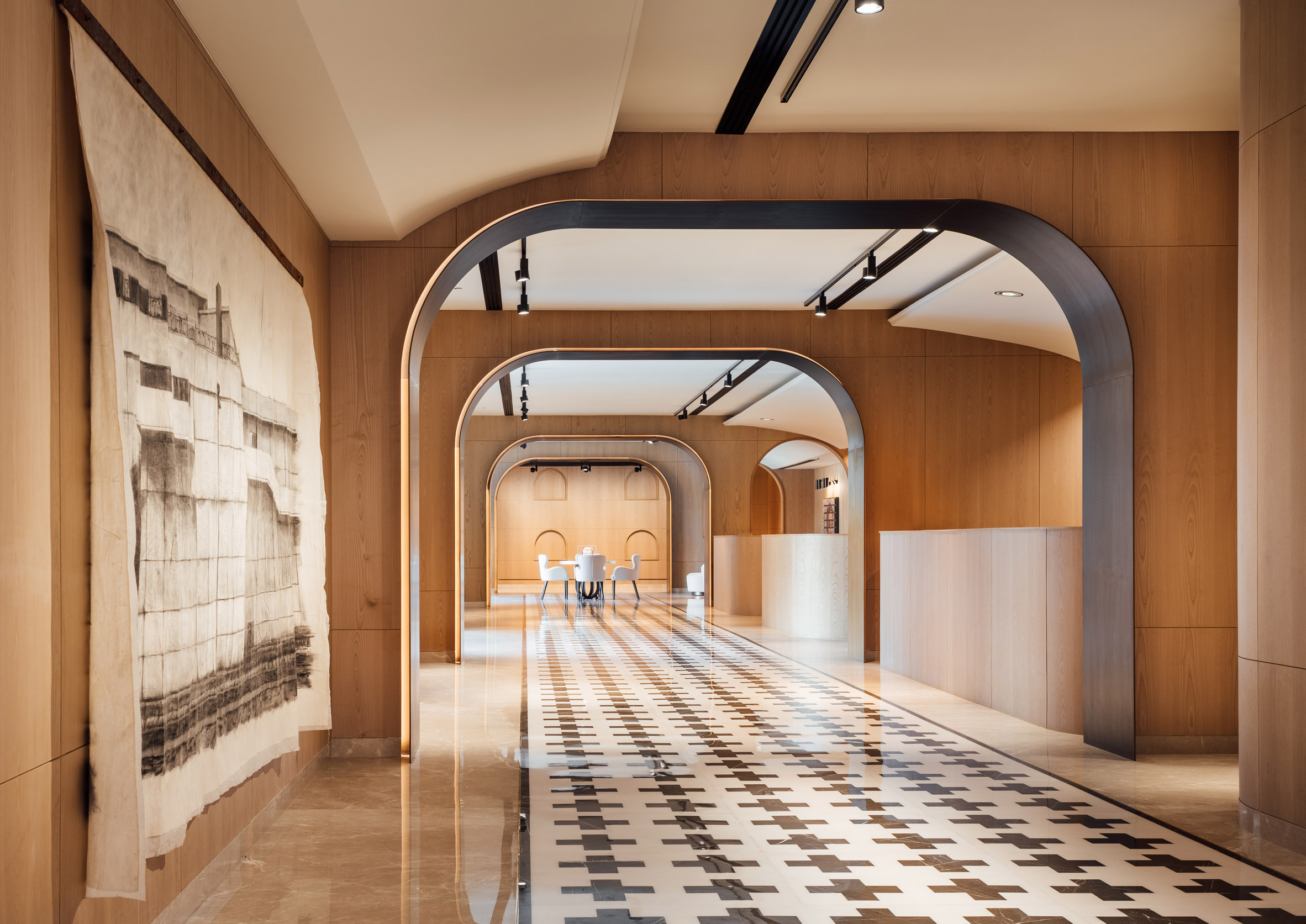 All corners of the interior structure have been rounded, accompanied by receding arches and curved, vaulted ceilings. This is particularly apparent in the main corridor that leads to both wings of the office floor.

The image of pills has also been extended to details like the wall panels and door mouldings, which feature the shape of two halves of a broken-apart pill.

On either side of each door at skirting level are small inlaid pieces of bronze carved in the shape of a circle and a cylinder, to represent a tablet and a pill. 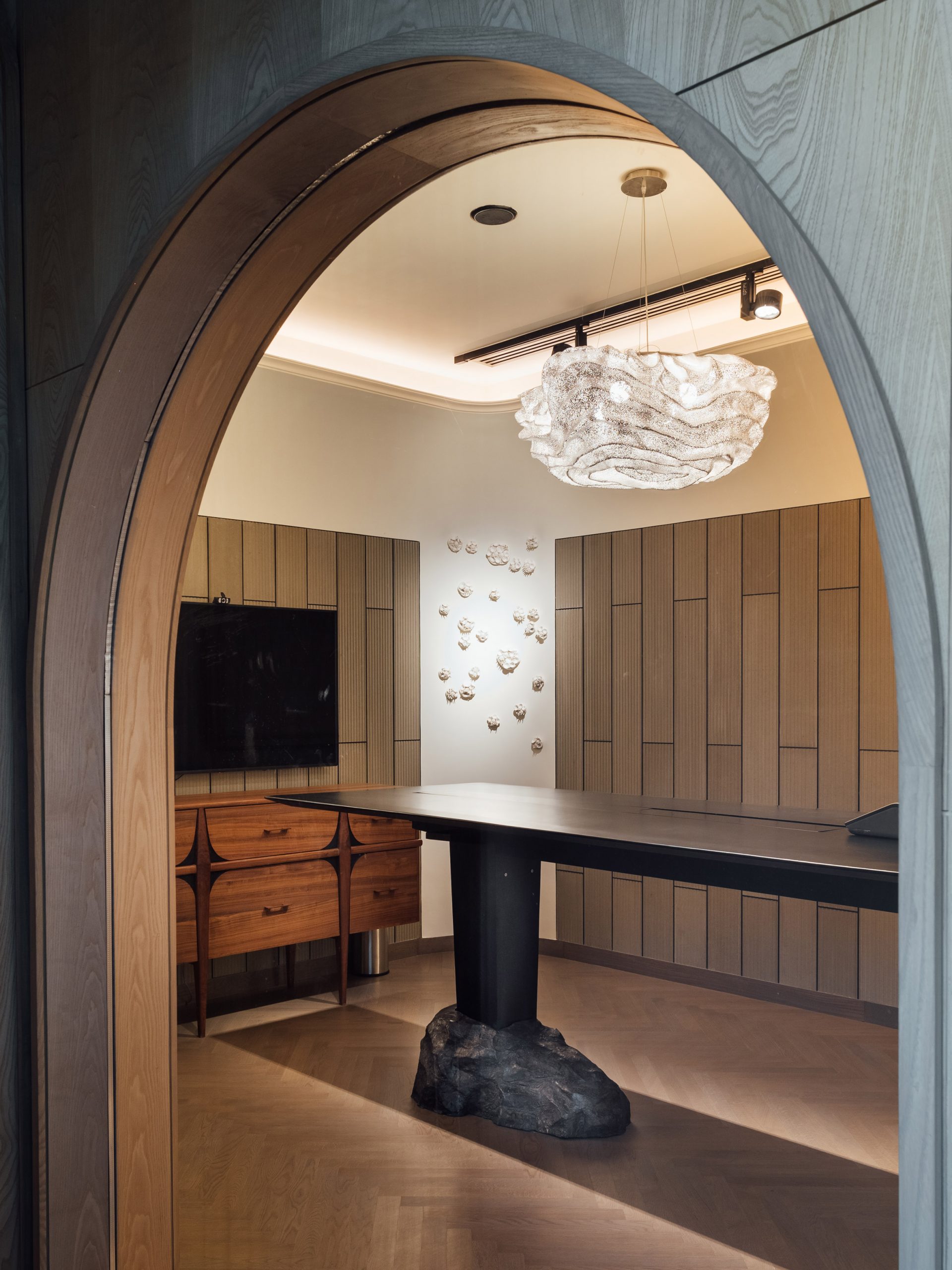 The chairman, managing director and director all have their own office on the floor, each with its own washroom and dresser as well as adjoining meeting rooms.

A pill-shaped, lacquered table inlaid with dried flowers acts as the centrepiece in one of the meeting rooms, while another meeting room is punctuated with a large, dark table whose base mimics the shape of a rock.

In this same space, the curved corners of the walls are dotted with small, handmade porcelain art pieces that are designed to be an abstract representation of the plant-based ingredients that go into Zydus Cadila’s products. 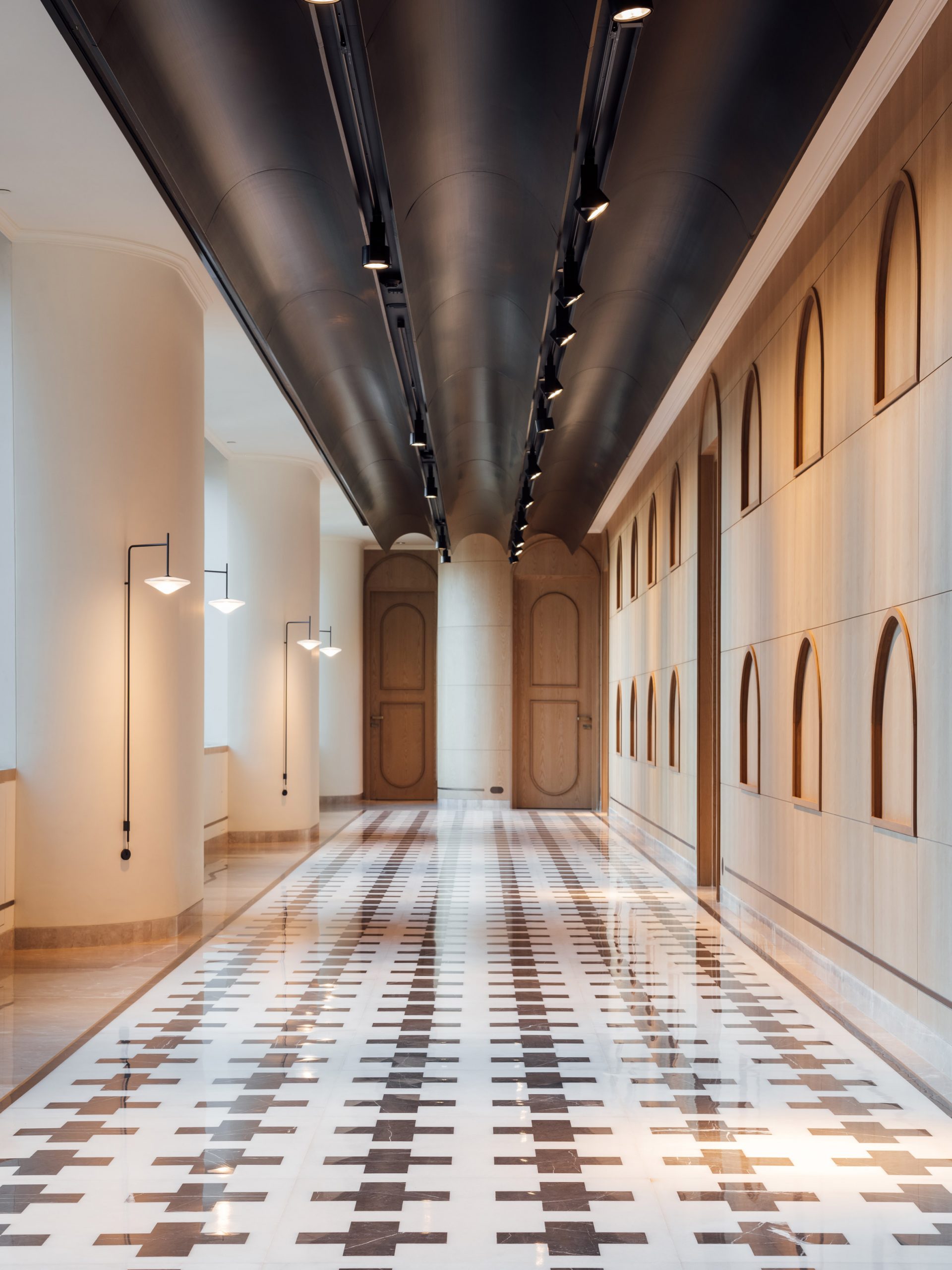 Other elements of the interior spaces were informed by the company’s logo, which comprises its name, Zydus, in blue with the letter d in red, and the shape of a cross replacing its centre.

This includes the marble flooring along the corridors, which features strips of white framed with black outlines with an inlay pattern of black crosses. 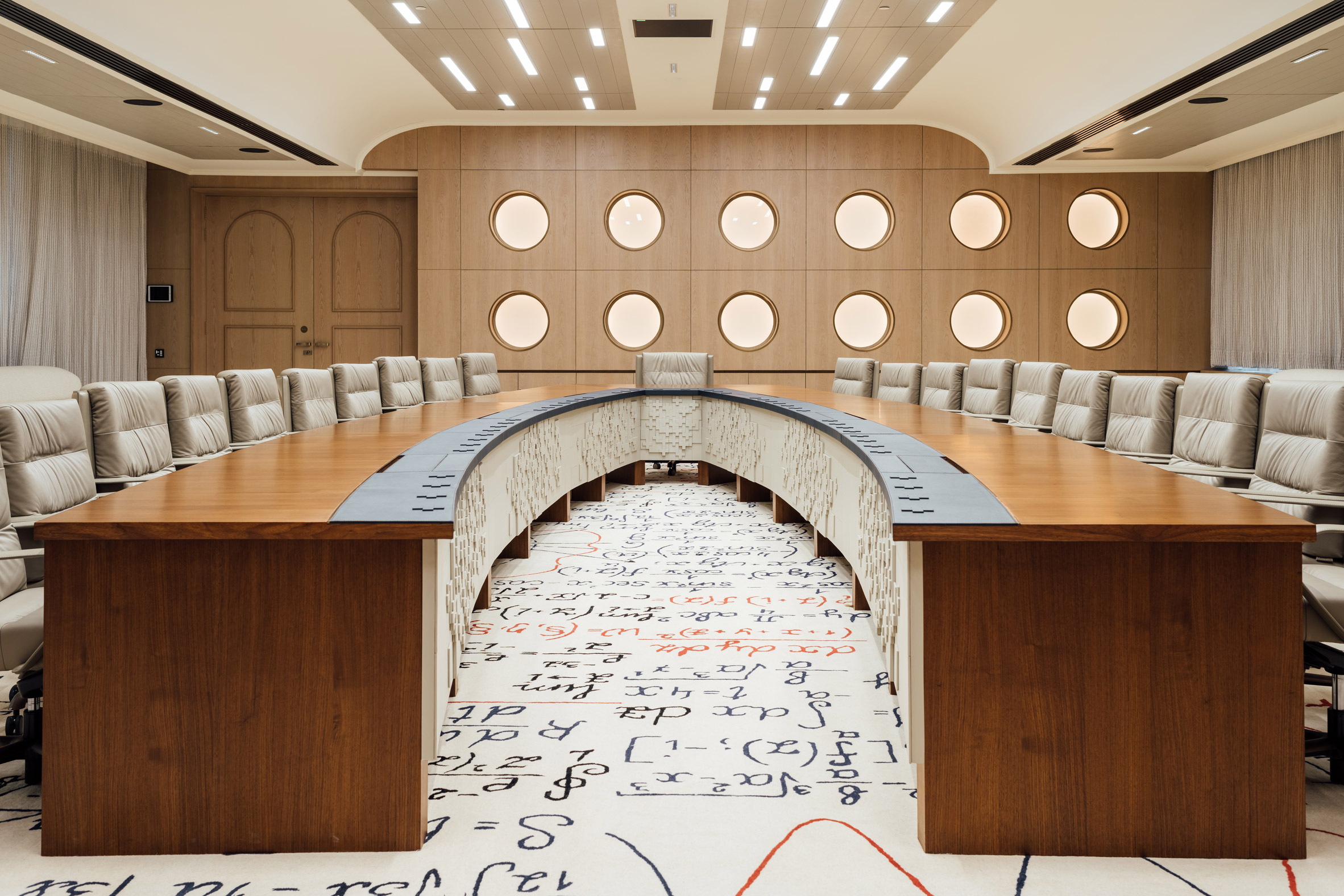 Iram Sultan extended this medical cross symbol across the whole office floor, incorporating it into various tables, which feature a black cross at their centre or sculpted, three-dimensional forms of the shape across their surface.

The logo’s colours also informed the custom carpet in the board room, which is covered in algebraic markings in black, red and blue.

This was one of the most fun elements to create, according to the studio, who chose the scientific equations as “a gentle nod to the bedrock of research that the company is built on.” 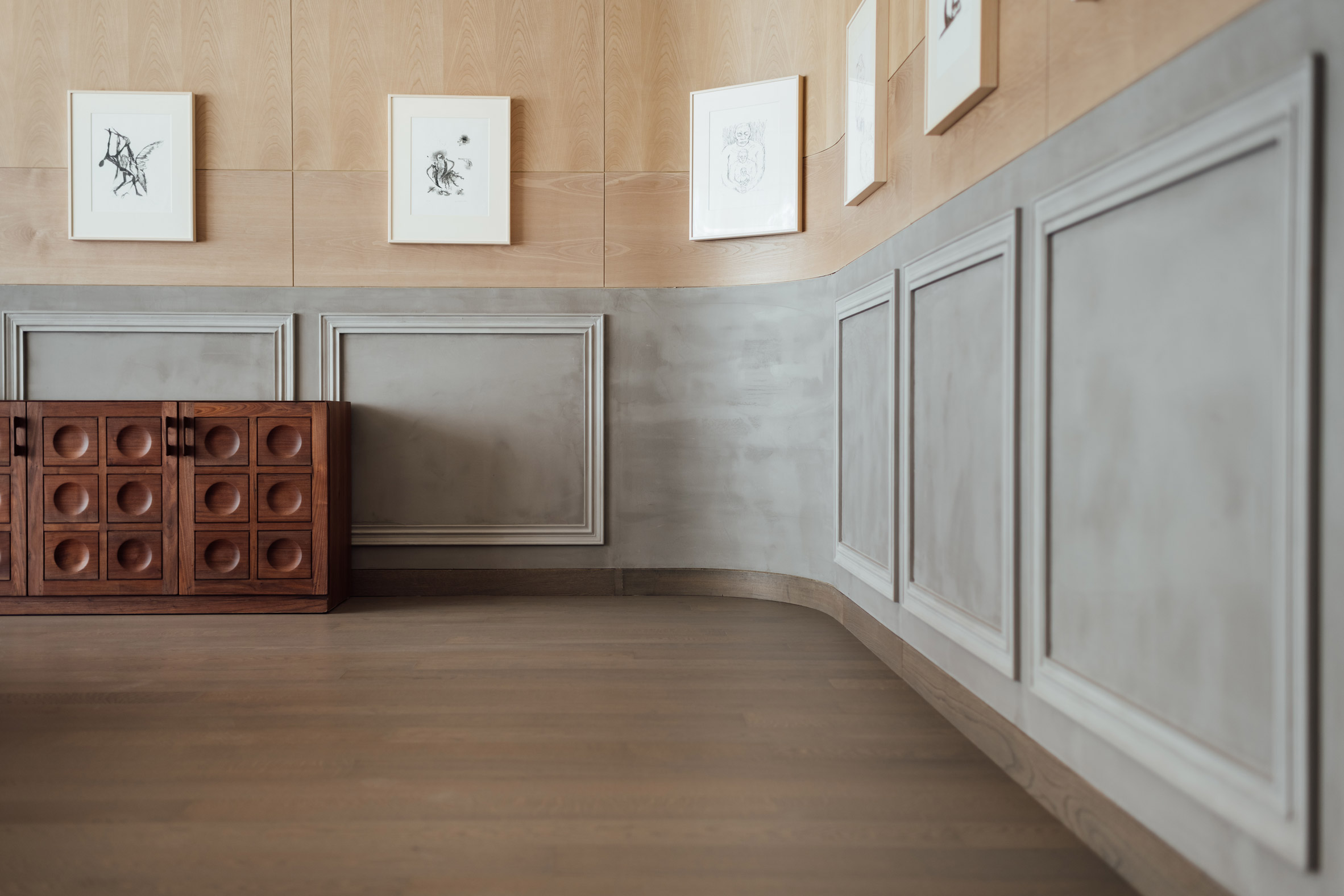 To warm up the interiors, the studio chose to clad the walls in dyed oak veneer. Thin sheets of bronze wrap around each archway lining the corridors, which also work to accentuate the spaces as they reflect the light.

Wooden floors of a slightly darker tone feature in individual offices in contrast to the surrounding hallways.

Each individual office was tailored according to the user’s personality and their working requirements. One office features soft grey lower-wall panels made from stone, while another has walls completely clad in light veneer and a large, oblong desk. 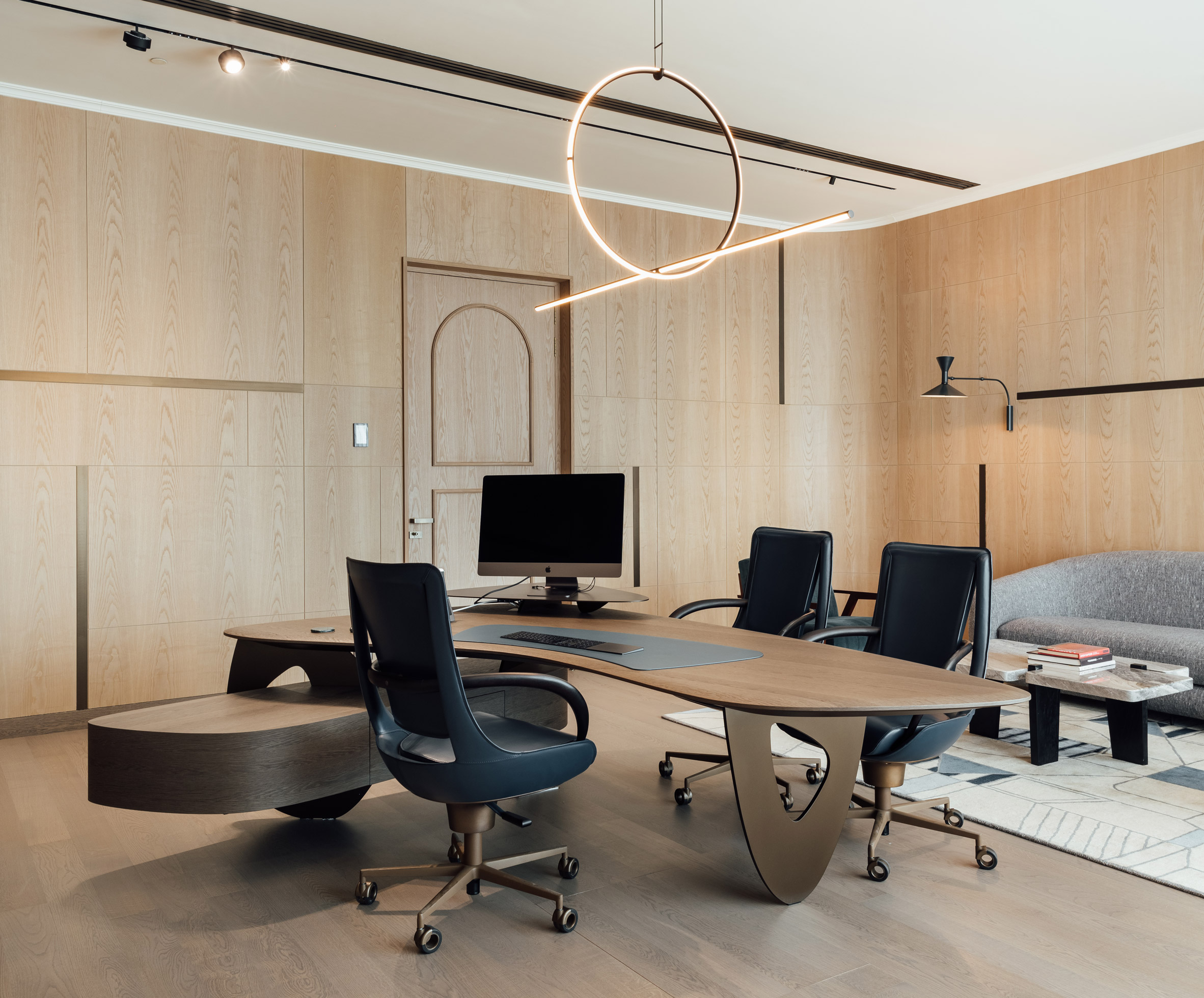 “The project is beautiful for us because it reflects the client brief perfectly,” said the studio. “While fulfilling all the requirements of an office space, the space is not a typical cookie-cutter design, but a bespoke creation made specifically for the people who use it.”

“The design is also beautiful because of the balance we managed to achieve in both the material palette and the space volumes,” it continued. “It is a serene space with quiet drama that we created using bespoke elements, clever details and unexpected materials.” 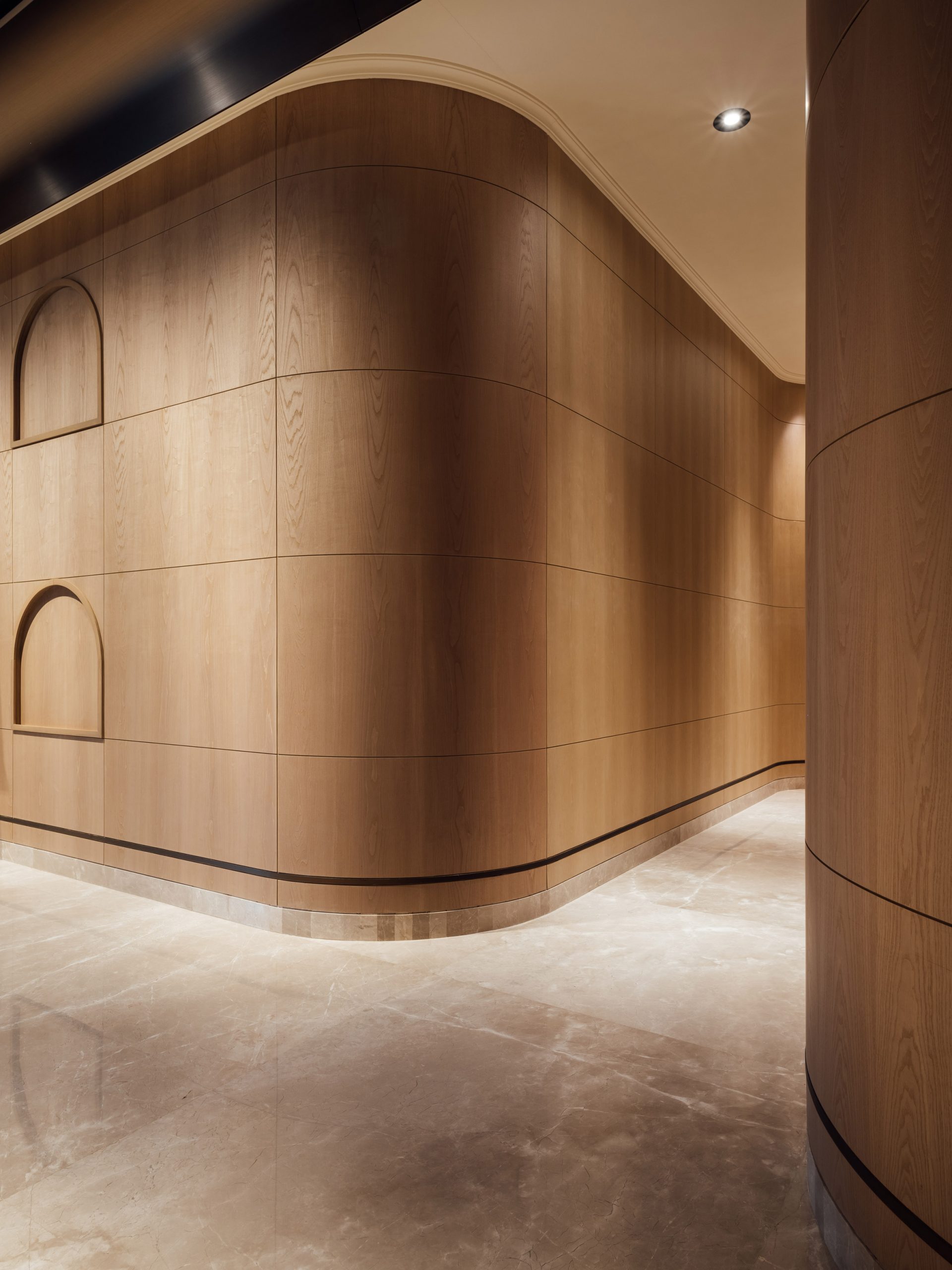 The Zydus Cadila chairman’s office floor was Iram Sultan’s second project for the client, having previously designed the interiors for their home.

“A project very close to our heart,” said the studio. “When we started work on this space, we had established a relationship of trust and understood the client well.”

“The project has been designed in the spirit of collaboration, beginning with the clients and adding other collaborators like product designers, manufacturers, contractors and consultants,” it added.

Other longlisted interiors projects include an office in Japan by Shuhei Goto Architects, in the small workspace interior category, which features large, stepped boxes that introduce different levels to the space.