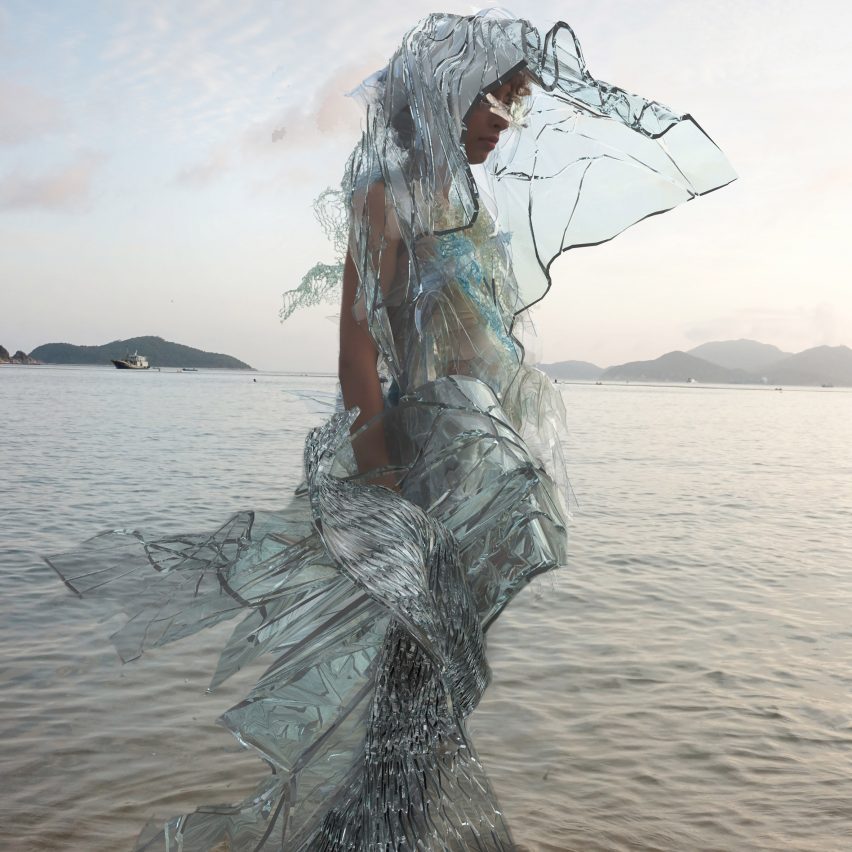 Central Saint Martins graduate Scarlett Yang used algae extract and silk cocoon protein to create a glass-like dress that grows over time and can decompose in water within 24 hours.

The biomaterial dress changes shape in response to different humidity and temperature levels, twisting and creasing as these conditions increase.

As the London-based graduate explains, this is variable depending on the geographic location and season that the garment is worn in. During a dry winter, for instance, the garment would stiffen and look more sculptural.

When exposed to water, the garment is able to decompose within hours. For example, the material decomposes within one hour when soaked in alkaline water at a temperature of 80 degrees celsius, or in less than 24 hours if soaked in 60-degree-celsius water.

Alternatively, the garment would degrade naturally in rain, river or sea water – another element dependent on the environment in which it is worn.

Yang was initially drawn to developing a biomaterial that can be naturally decomposed after becoming aware of the amount of waste created by the fashion industry.

“After studying fashion for five years at Central Saint Martins I realised how much material waste is generated within traditional fashion design project development,” she explained.

“Garment toiles (mock-up models) are made repeatedly before going into actual production, let alone with the manufacturing process that comes after.”

“The vast majority of textiles on the market are not recyclable, which means we fashion graduates and students are also contributing to the pollution issues if we still do things the traditional way,” she continued.

“My garments display the beauty of natural life forms, aiming to challenge audiences’ perception of the concept of material life cycles.”

To make the dress, Yang first used generative design to create a 3D computer model of the textural shape that the material would take before digitally fabricating a casting mould using 3D-printing and laser-cutting technologies.

This was to ensure she didn’t create an excess of material that would go to waste.

The designer then applied the biomaterial – made from a mixture of water, coloured dye and algae extract – in its liquid form onto the mould and left it to solidify.

Following this, she applied a silk cocoon protein – known as sericin – onto selective parts of the material where she wanted it to crease and shrink in response to its environment. The protein has this effect due to its “hydrophobic” characteristics.

According to Yang, silk cocoon protein is commonly treated as refuse in industrial textile manufacturing, particularly in European and Asian traditional silk production plants. She therefore used the sericin to save it from going to waste.

While Yang created a physical version of the dress, she also used 3D modelling, animation and rendering to simulate the potential different outcomes of the material in various conditions.

For her final graduate presentation, she used these animated visuals to form a 360-degree showroom experience, which saw four digital versions of the biomaterial garment displayed in a gallery floating above the ocean, before gradually sinking into the water.

People could view the collection online or with a virtual reality headset and observe the decomposition process, as well as examining the material itself up-close.

As Yang told Dezeen, if the algae-based material was to be used for commercial products, it could take several forms, including fashion garments, interior products or packaging materials.

“Potentials lie in the research-and-development side of this design method for further commercial inquiries,” she said. “Consumer products made with this biomaterial have the ability to degrade after the intended time of use, or alternatively it can change in size, shape and texture.”

“The documentations on the material’s decomposition phases allows an open-ended discussion on its potential use.”

The post Scarlett Yang designs lab-grown dress from algae that can decompose in hours appeared first on Dezeen.