Home/Sea Stone is a concrete-like material made from shells

Sea Stone is a concrete-like material made from shells 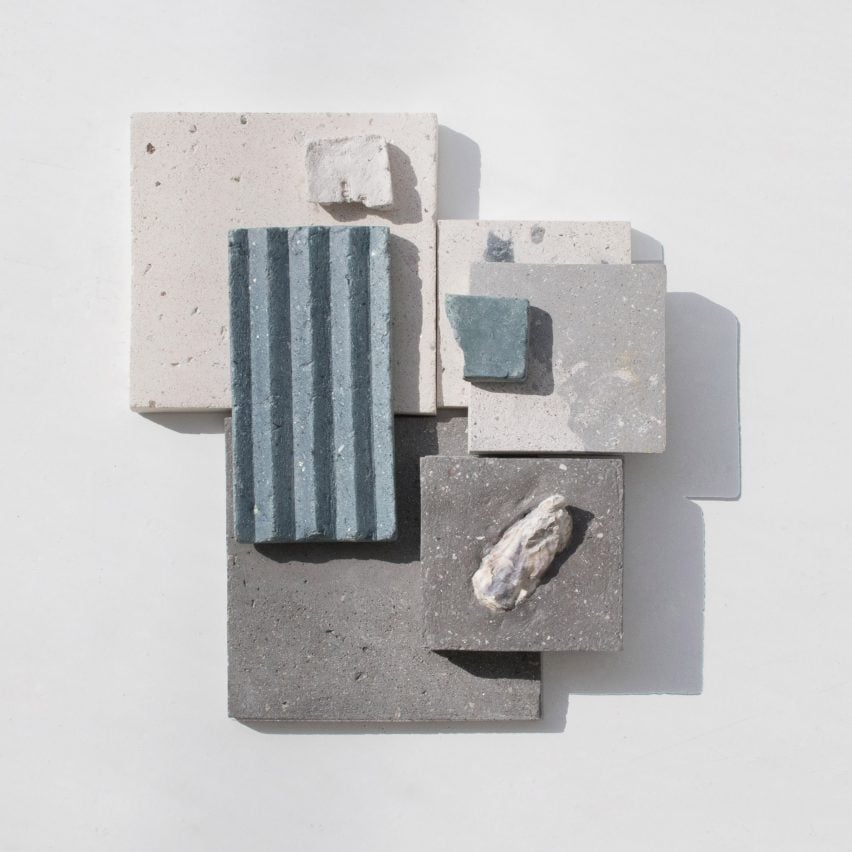 Newtab-22 has used waste seashells salvaged from the seafood and aquaculture industries to develop a sustainable material that resembles concrete.

Named Sea Stone, the material is made by grinding down shells that are destined for landfill before combining them with natural, non-toxic binders. This grants the Sea Stone a terrazzo-like aesthetic.

According to Newtab-22, Sea Stone could become a sustainable alternative to concrete in the design of small-scale products, as the two materials share similar properties. This is because seashells are rich in calcium carbonate, otherwise known as limestone, which is used to make cement – a key ingredient of concrete.

Sea Stone evolved from Newtab-22’s ambition to help alleviate the issue of waste in the seafood industry, which it claims results in seven million tonnes of seashells discarded every year. The majority of this waste ends up in landfills or is dumped on beaches.

“Even though some of the seashells have been recycled and used as fertilisers, the majority of them are being thrown into landfills or by the seaside,” explained Newtab-22.

“The discarded seashells, which are uncleaned or rotten, have not been cleared away at all and they have been piling up near the beach for a long time, thus causing odour pollution and polluting the surrounding land in the long run,” the studio continued.

“Sea Stone proposes the use of discarded seashells to create environmentally and economically sustainable material rather than contributing to the world’s rubbish problem.”

The process of making Sea Stone involves grinding down the shells and mixing them with natural binders. They are then added to a mould and left to solidify into concrete-like pieces.

This method is currently carried out manually to avoid the use of heat, electricity and chemical treatments and ensure the process is as sustainable and affordable as possible.

It results in variations in the sizes, textures and colours of the shell fragments and means that each piece of Sea Stone unique. Differences can also occur by altering the quantities of shells and binders, or by adding coloured dyes.

Newtab-22 has experimented with an array of natural binders in the development of Sea Stone, including sugar and agar. It is now reliant on two undisclosed and patent-pending sources.

The material is currently being developed for commercial purposes and has so far been used to make products such as decorative tiles, tabletops, plinths and vases.

However, it will not be available as a concrete alternative for large-scale or structural projects.

While the properties of the concrete and Sea Stone are similar, to truly replicate the strength of traditional concrete required in large-scale projects like buildings, an energy-intensive heating process would be required.

This would be comparable to the method used to make cement, which accounts for half of all the CO2 emissions that result from using concrete.

“The power of the material is different,” explained Hyein Choi, co-founder of Newtab-22, told Dezeen. “We do not want to harm the environment in the process or the outcome.”

“If you put high energy and cost, it is highly possible to use Sea Stone as real cement. It is paradoxical and controversial, we think, as this leads to secondary pollution,” she added.

Newtab-22’s interest in using discarded materials developed while its founders, Choi and Jihee Moon, were enrolled on the Royal College of Art‘s Design Products course.

The pair have now moved to Seoul, South Korea, to continue developing the project as they claim the issue of seafood waste is rife in the country.

“We started the project while in London and then we came to Seoul, South Korea,” said Choi.

“This transition allows us to collect discarded seashells in a much bigger scale than what we would accomplish in the UK as the south of South Korea is suffering from the removal of tons of discarded seashells, and the aquafarm and the seafood industry is huge.”

Sea Stone has been longlisted for the Dezeen Awards 2020 in the Sustainable design category. The project also featured at the Virtual Design Festival as part of the Ventura Projects collaboration.

Other new and unusual materials featured on Dezeen that are made from discarded shells are the Tômtex leather alternative and the recyclable bioplastic called Shellworks.

The post Sea Stone is a concrete-like material made from shells appeared first on Dezeen.