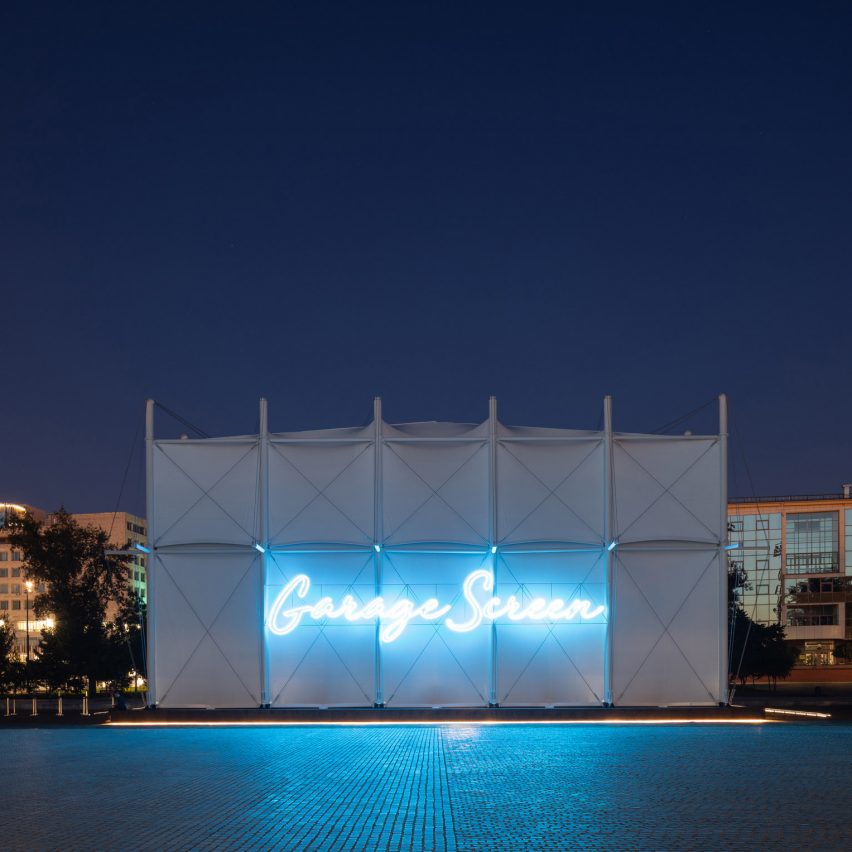 Armenian architectural studio SNKH has created a pop-up cinema informed by Bedouin tents outside the Garage Museum of Contemporary Art in Moscow.

Named the Garage Screen, the pop-up cinema was built in Garage Square of Moscow’s Gorky Park, directly opposite the Garage Museum of Contemporary Art which was designed by Dutch studio OMA.

SNKH‘s temporary structure will host a programme of Russian and international films. The studio’s design, which was selected from 136 submissions in an open competition, directly references the building’s temporary nature. 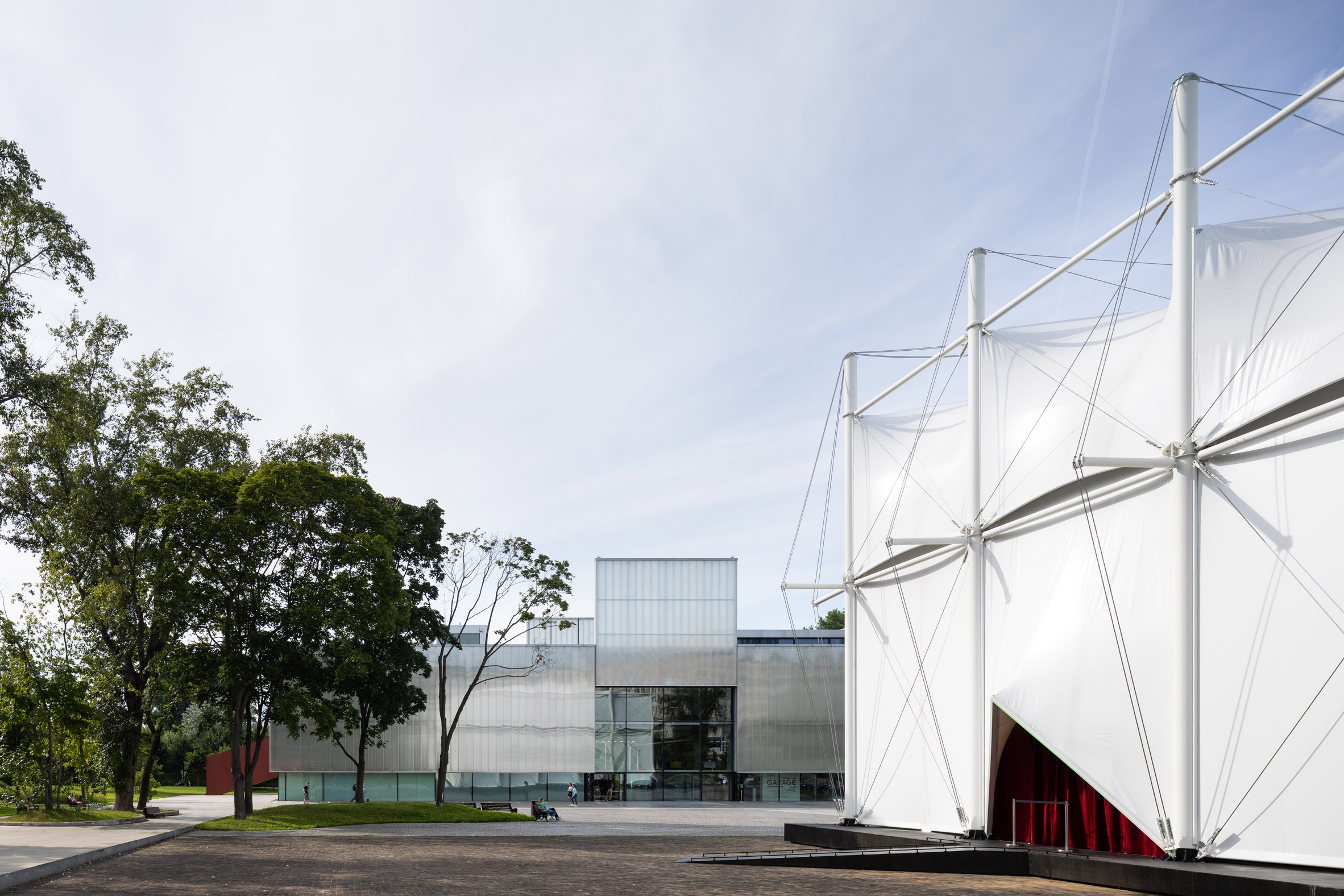 “We wanted to highlight its temporary, ephemeral nature,” she told Dezeen. “From day one, we knew that it should be light and should seem kind of fragile, with no walls or hard barriers as constructive elements.” 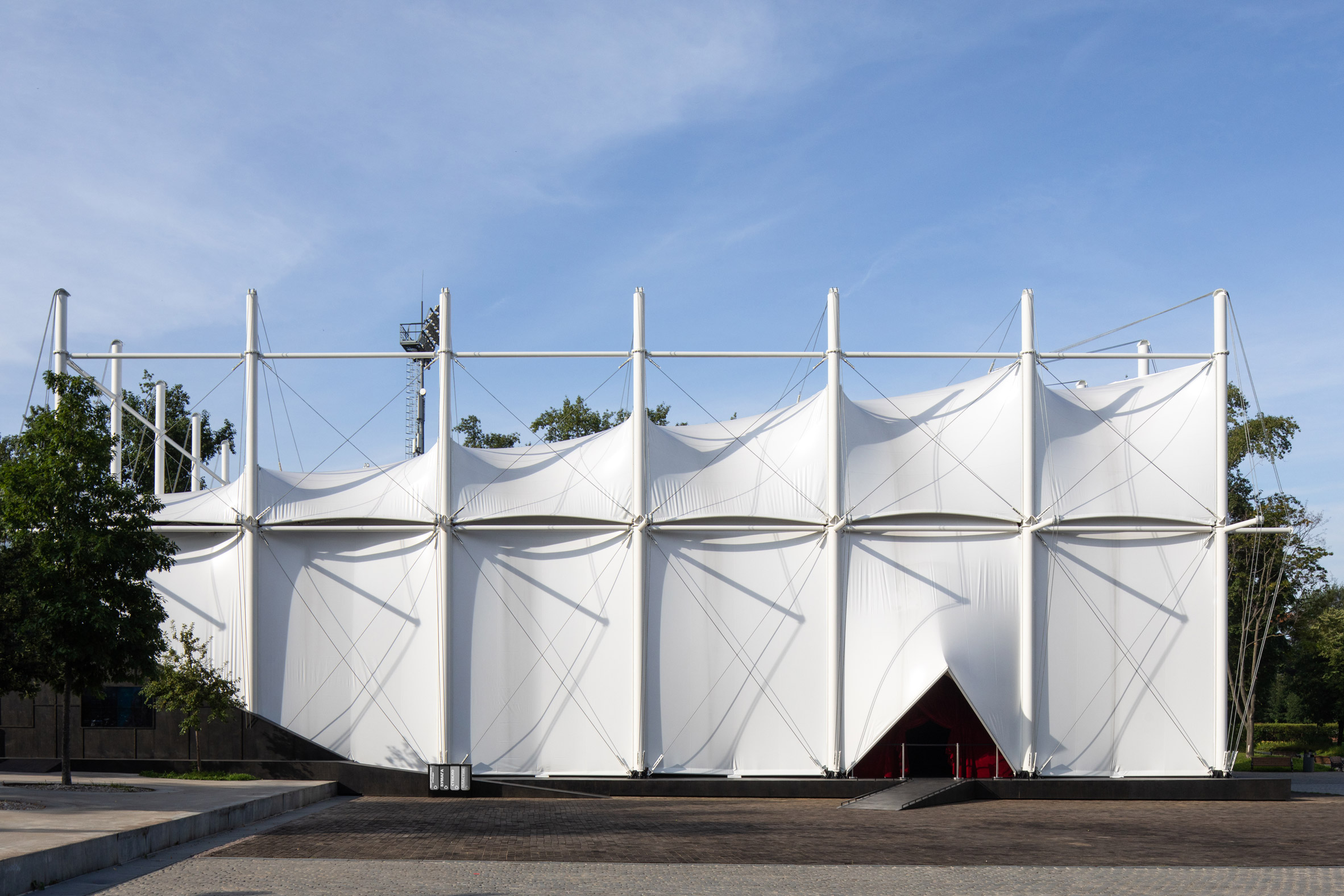 The studio described the structure as an “inverted Bedouin tent”, with the cinema enclosed within a PVC membrane hung from an external steel frame.

The building, which has the majority of its structure placed on the outside, also references the high-tech architecture of Richard Rogers and Renzo Piano. 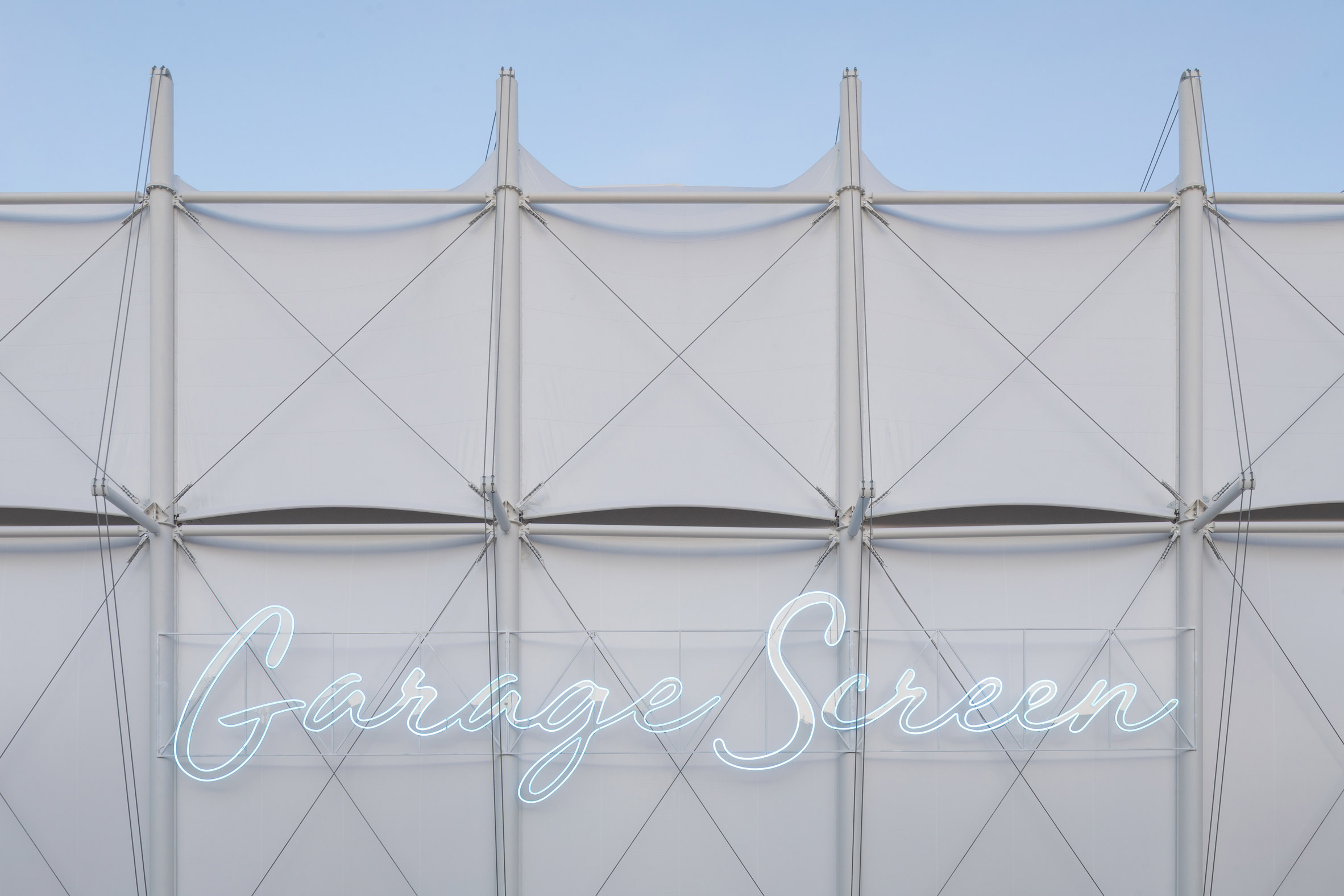 “In our work, we use multiple references,” explained Snkhchyan. “From Bedouin tents as an example of traditional nomad architecture to works of Russian constructivists, early works of Renzo Piano and many others.”

“Those references may not be clearly recognisable at first sight, but they’ve heavily influenced our work,” she continued. “We’ve envisioned a light external bearing structure that works on its limit and used a PVC membrane as a cover.” 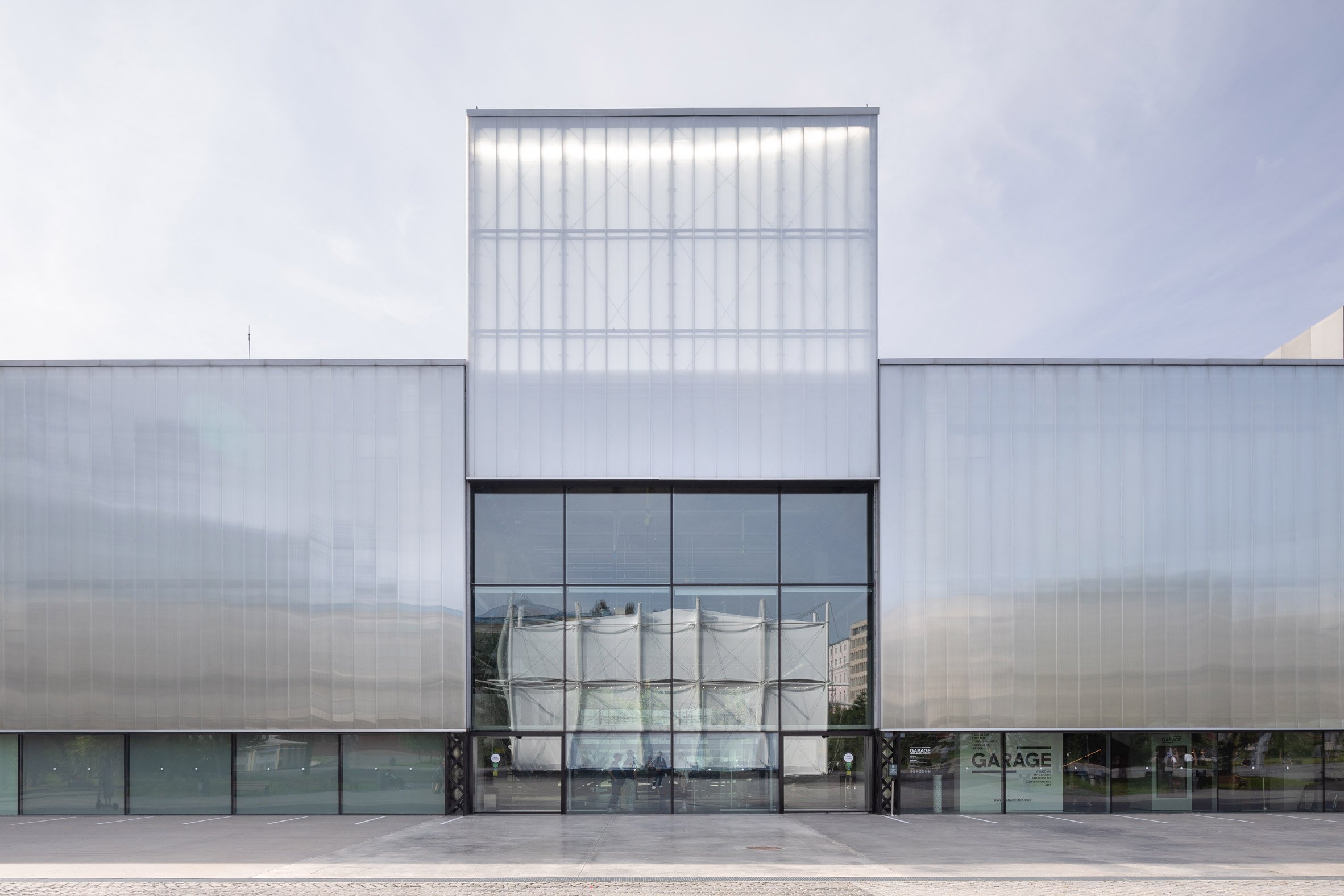 SNKH also aimed to ensure that the temporary building would not fight for attention with the OMA-designed museum it stands near.

“As it is a temporary structure we thought that we could deal with the location in an easier manner,” said Snkhchyan.

“The Garage Museum of Contemporary Art is very dominant on the square. We knew that our project should not be ‘noisy’, but at the same time, it should be bold. We hope we’ve managed to achieve that effect.” 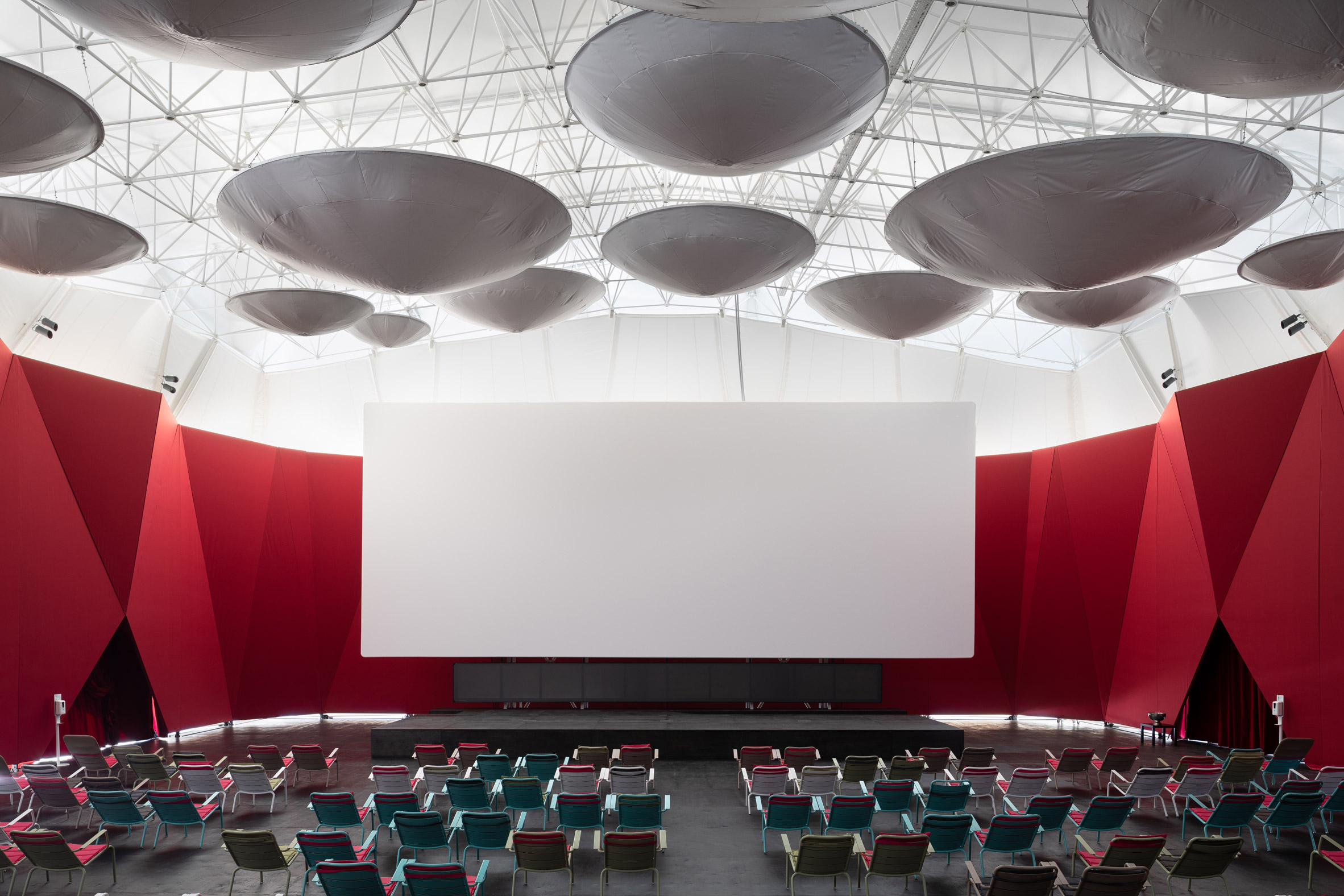 While the building is not directly recognisable as a cinema, the studio created a series of hints to its function.

“We tried to highlight its function by showing the contour of the amphitheatre on the facades and the ceiling membrane goes up, towards the screen inside creating a recognizable silhouette,” said Snkhchyan.

“Maybe it is not immediately recognisable as a cinema, but its spatial solutions should give a hint that there’s some kind of auditorium inside.” 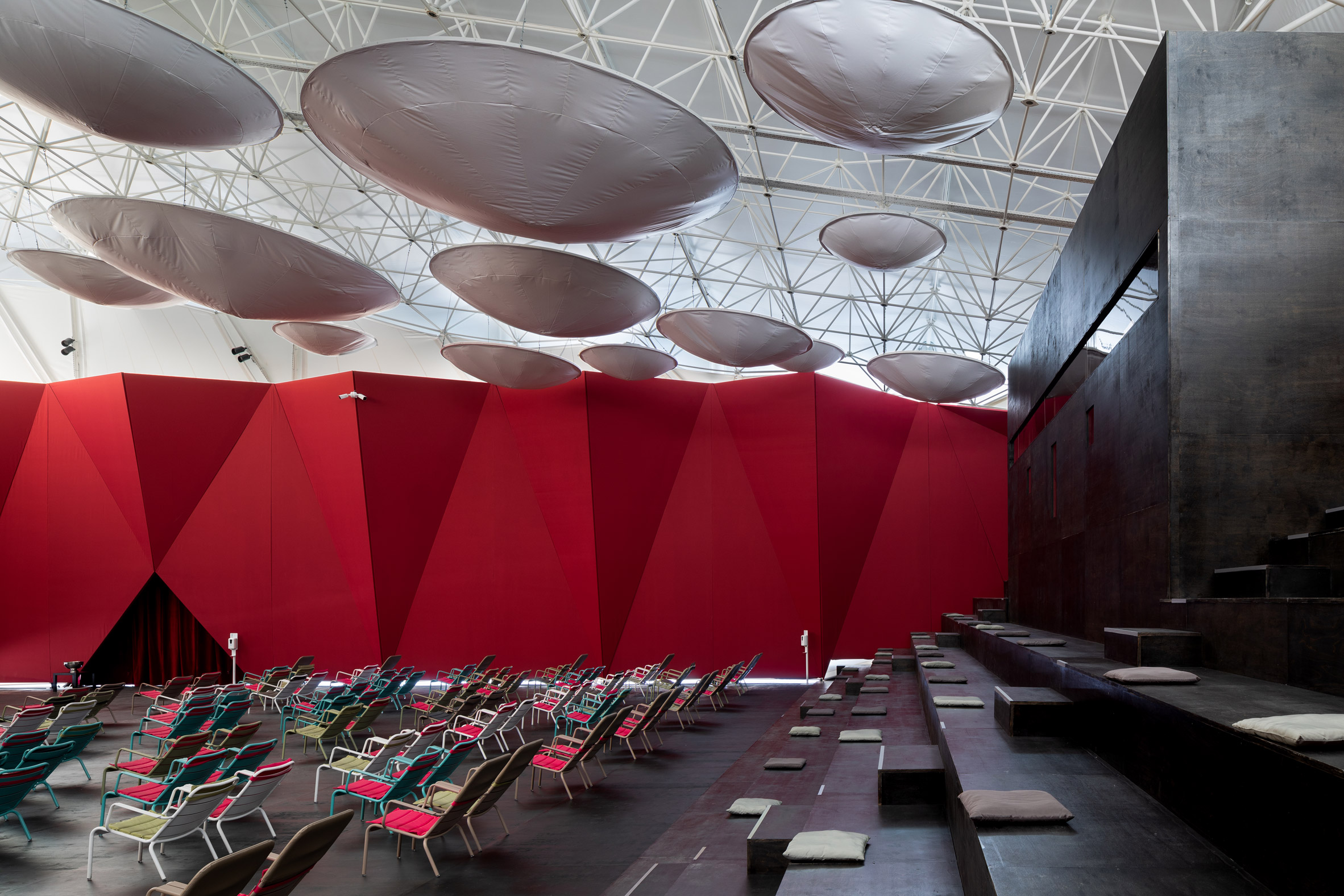 Within the cinema, the auditorium has faceted red walls with the roof structure visible and supporting sound baffles. Visitors will be seated on individual chairs.

The number of chairs within the cinema was almost halved to meet social distancing rules imposed by the coronavirus pandemic. 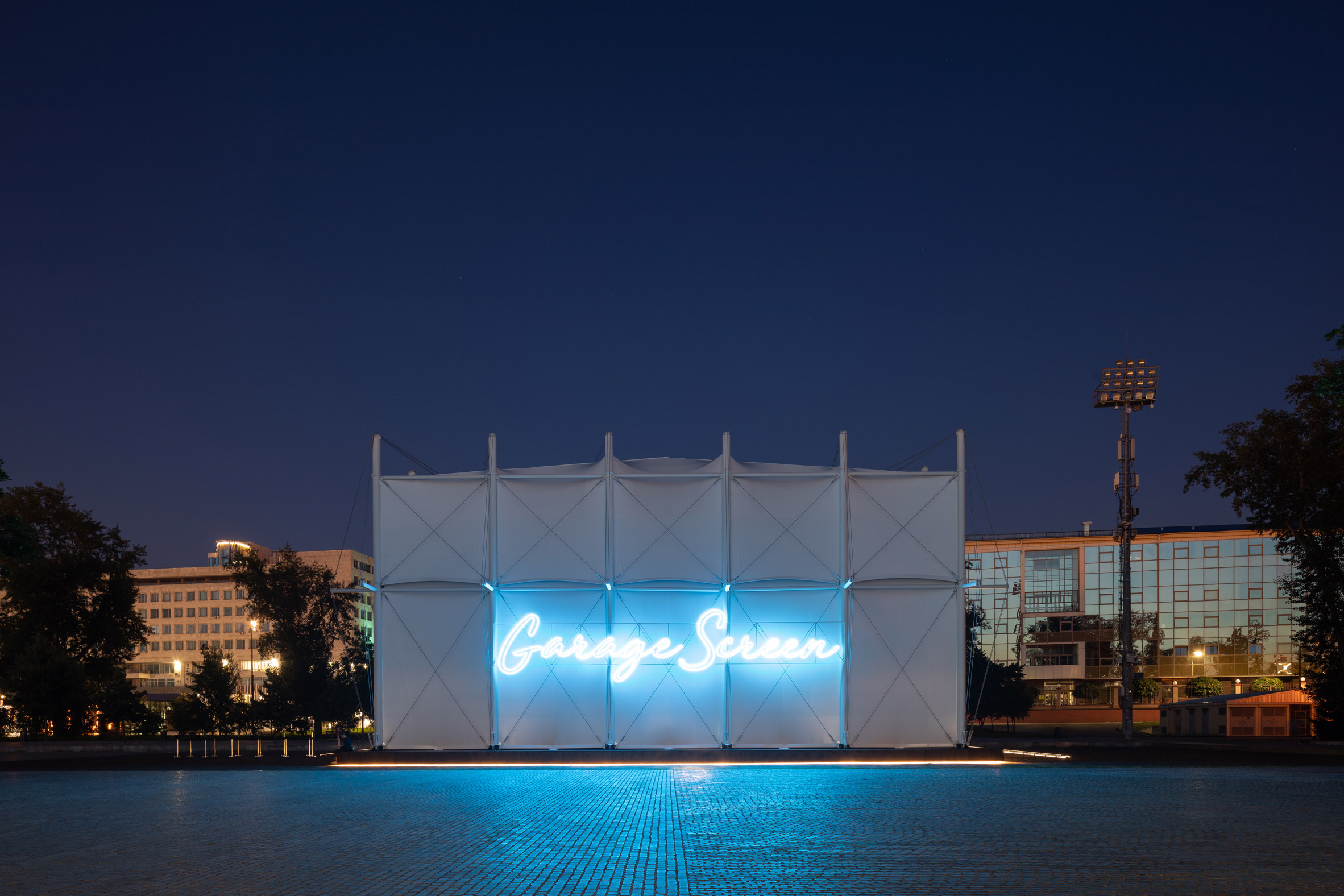 “Fortunately, our design had very useful advantages in these circumstances: the pavilion has four entrances which allows us to organise the flow of people, and due to structural peculiarities and the tension of the membrane, the pavilion has natural ventilation,” explained Snkhchyan.

“The only thing that has changed was the number of the seats. The auditorium was meant for 450 visitors – now its capacity is 225 for social distancing reasons.” 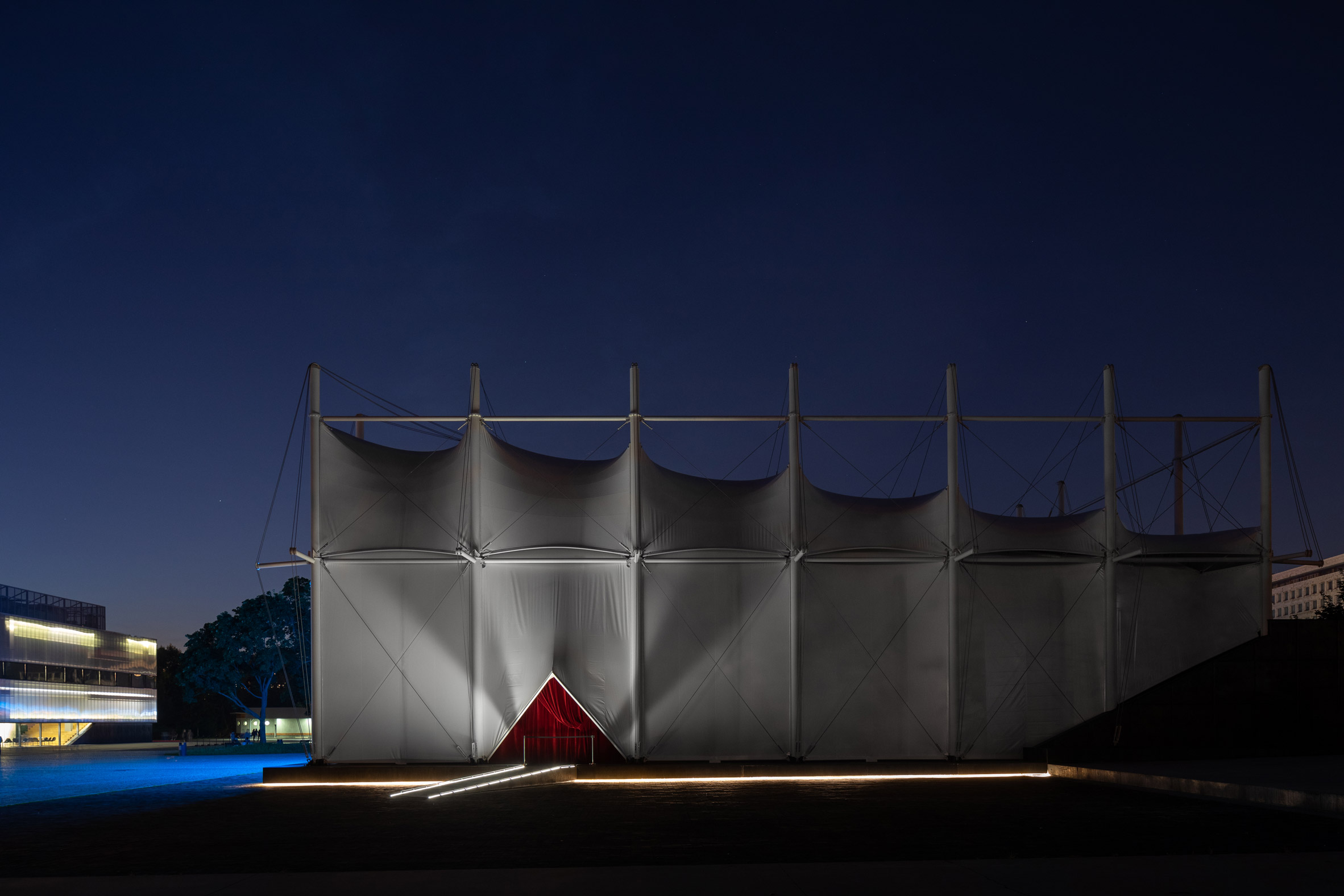 Other recently completed cinemas include a colonnaded movie theatre by Tracks Architectes, which occupies a former French convent.

Design agency Layer has also designed a seat for social distancing in cinemas called Sequel that is knitted from antibacterial copper threads.