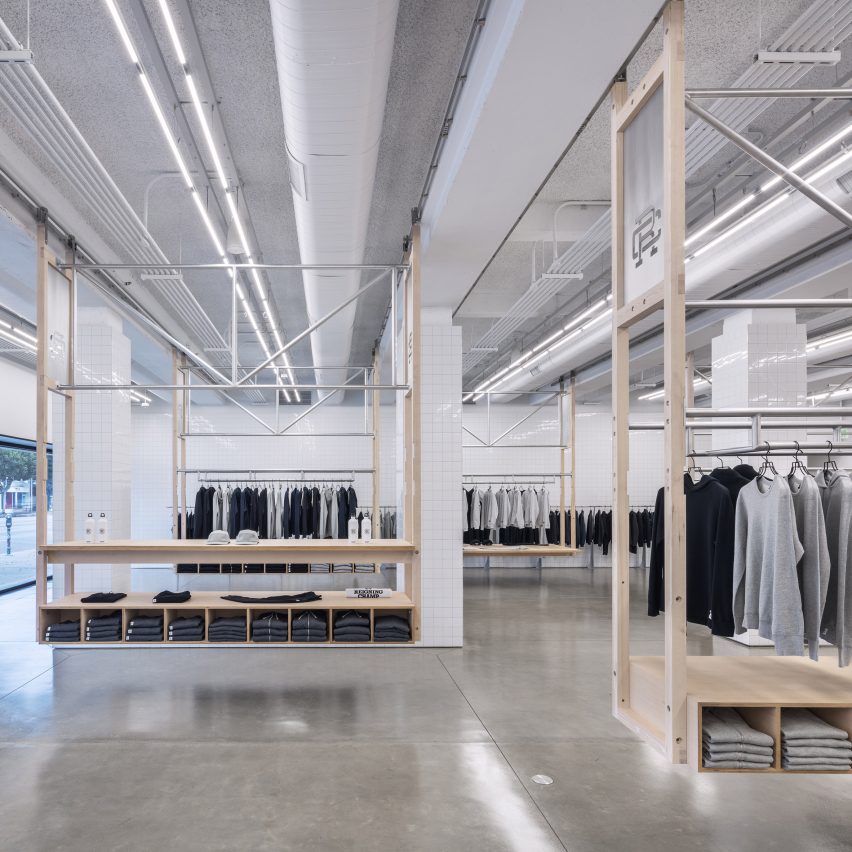 Vancouver studio Peter Cardew has designed this store in Los Angeles for an athletic wear clothing company to allude to the aesthetic of a gym. 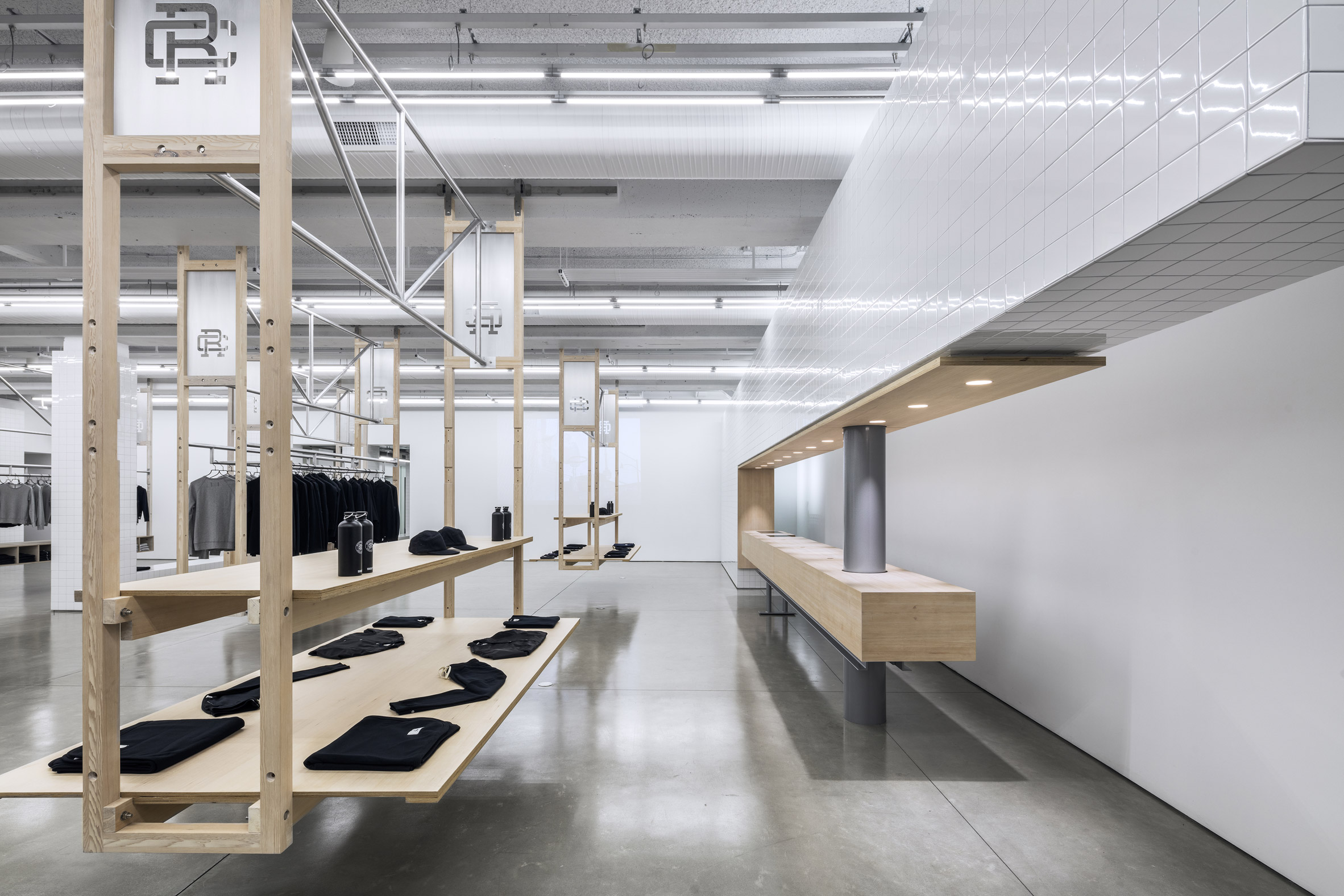 “In order to connect the customer with the product the design of the Los Angeles store obliquely alludes to the domain of a gym, providing an harmonious setting appropriate for the display of athletic clothing,” the studio explained. 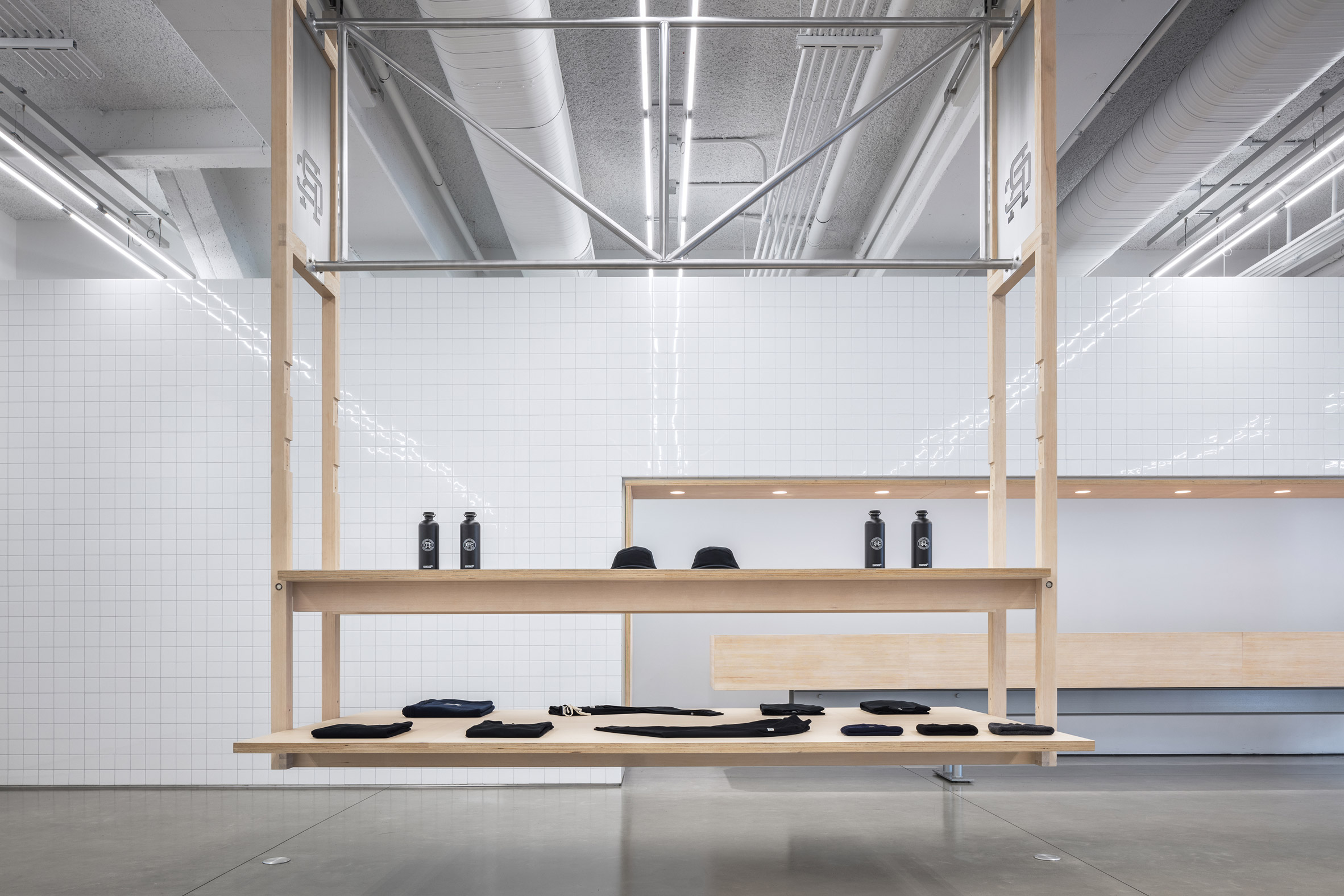 “The choice of materials reinforces the relationship to sporting activity with the use of functional and utilitarian white glazed tile as wall and bench surfaces, polished concrete floors, and display fixtures fabricated using western hemlock, a plentiful economic wood with a straight grain efficiency,” it added.

“All culminating to convey a functional place of activity akin to any effective sporting milieu.” 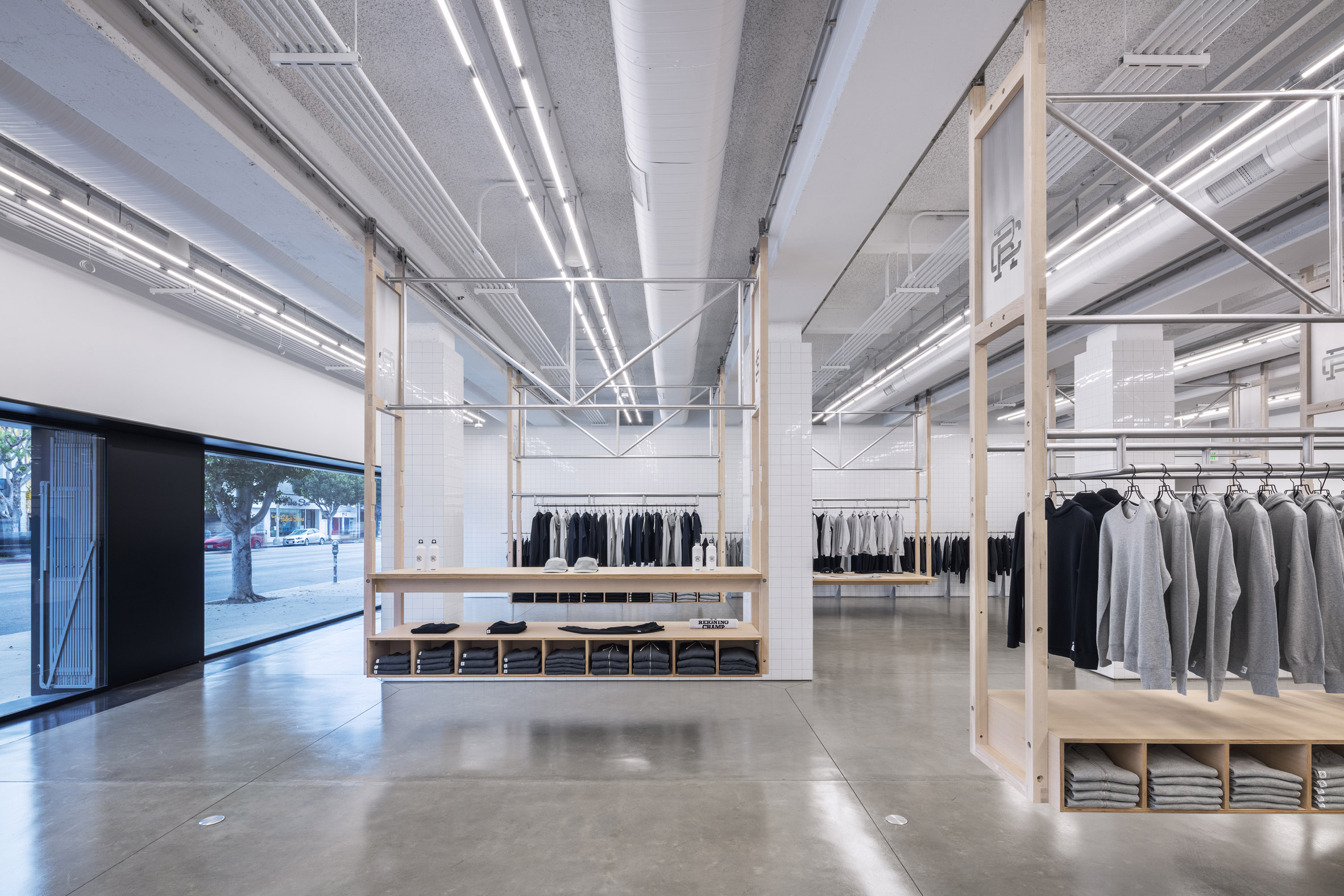 Piles of folded clothes are stored in the base of the wooden clothing racks that are suspended on rails from the ceiling. 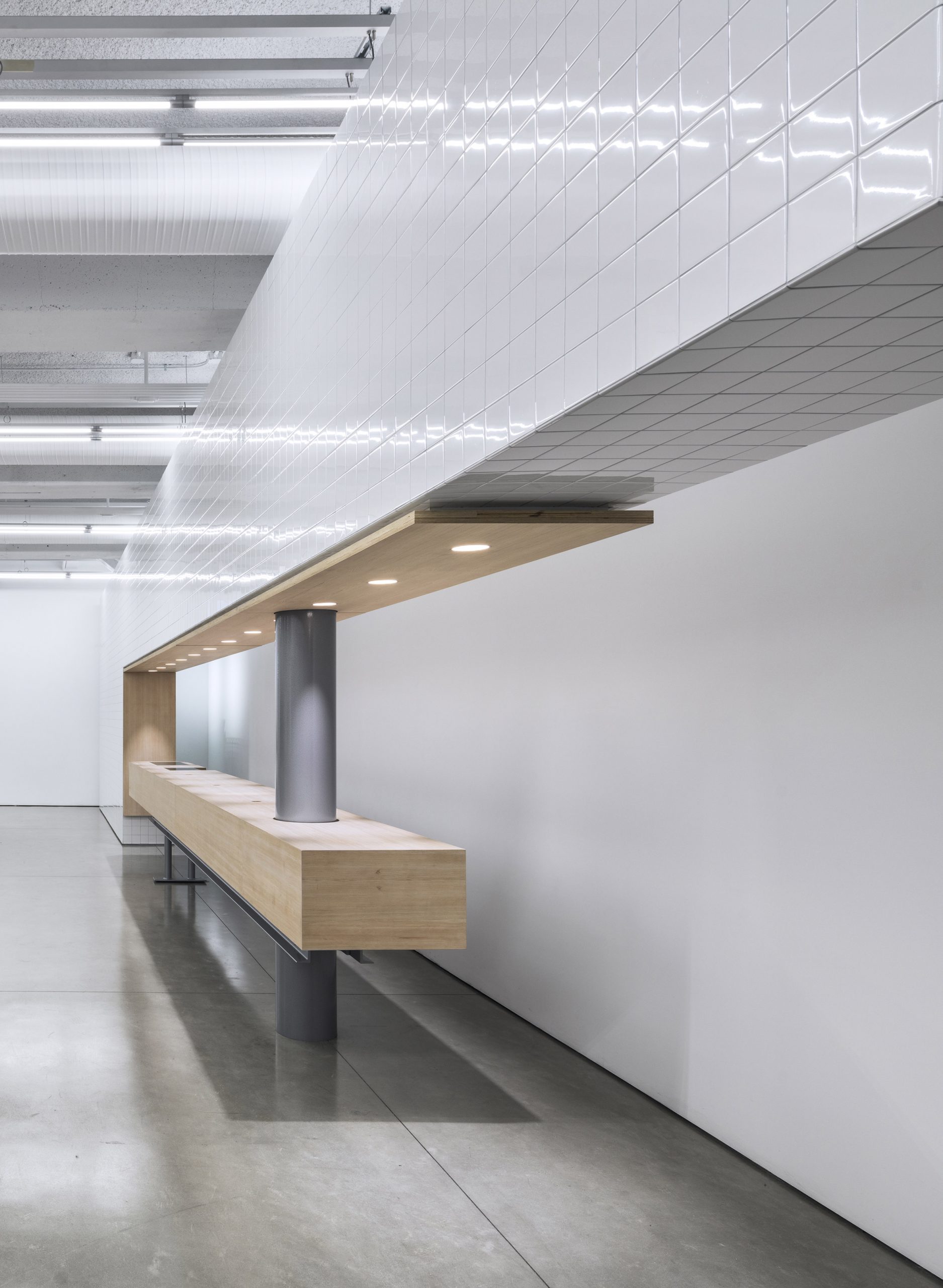 “In keeping with this active rather than passive environment the display fixtures are infinitely mobile being suspended from concrete beams attached to wheeled tracks which easily allows for changing seasonal configurations,” the studio added.

“In addition, to facilitate yet more changes these fixtures are simply bolted together so that they can be removed for special events, celebrations, or exhibitions.”

The materiality continues into the changing rooms, whose doors feature an opening with a built-in wooden shelf so customers can swap clothes with Reigning Champ salespeople.

Reigning Champ spans the ground floor of its building with two large windows offering views and natural light into the space. 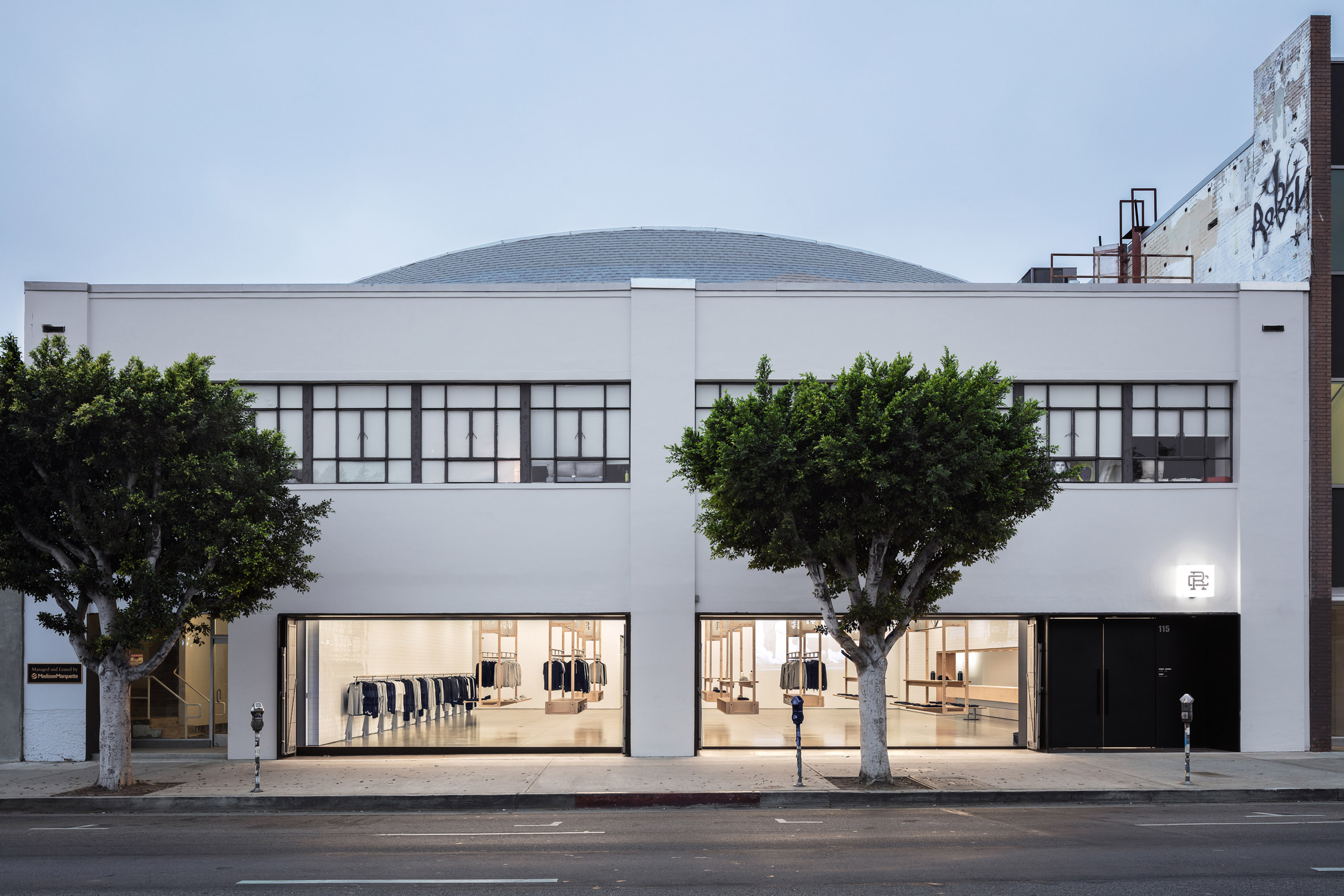 The project, which is longlisted in the large retail interior category of Dezeen Awards 2020, marks the first in the US for the Canadian clothing brand. It is its fifth in total following two in Vancouver and two in Toronto.

Other shops recently completed in Los Angeles include a marijuana dispensary Commune designed to be airy and luxurious, and a dramatically narrow, runway-like space Bernard Dubois designed as the first store for sneaker brand APL.

Photography is by Mike Kelly, unless stated otherwise.