New York practice Desai Chia Architecture has wrapped a house in Connecticut situated on top of a rocky ledge with charred cedar and large windows that overlook the hilly landscape.

Ledge House is located in Cornwall, Connecticut on a site that is occupied by a large boulder deposited on the hillside hundreds of thousands of years ago when the nearby Appalachian Mountains were forming.

The 2,400-square-foot (223-square-metre) house features a gabled roofline that takes cues from traditional barn architecture and the historic covered bridge in West Cornwall.

Its facade is clad with charred cedar, which is darkened using the Japanese technique shou sugi ban, and it is topped with aluminium roof. 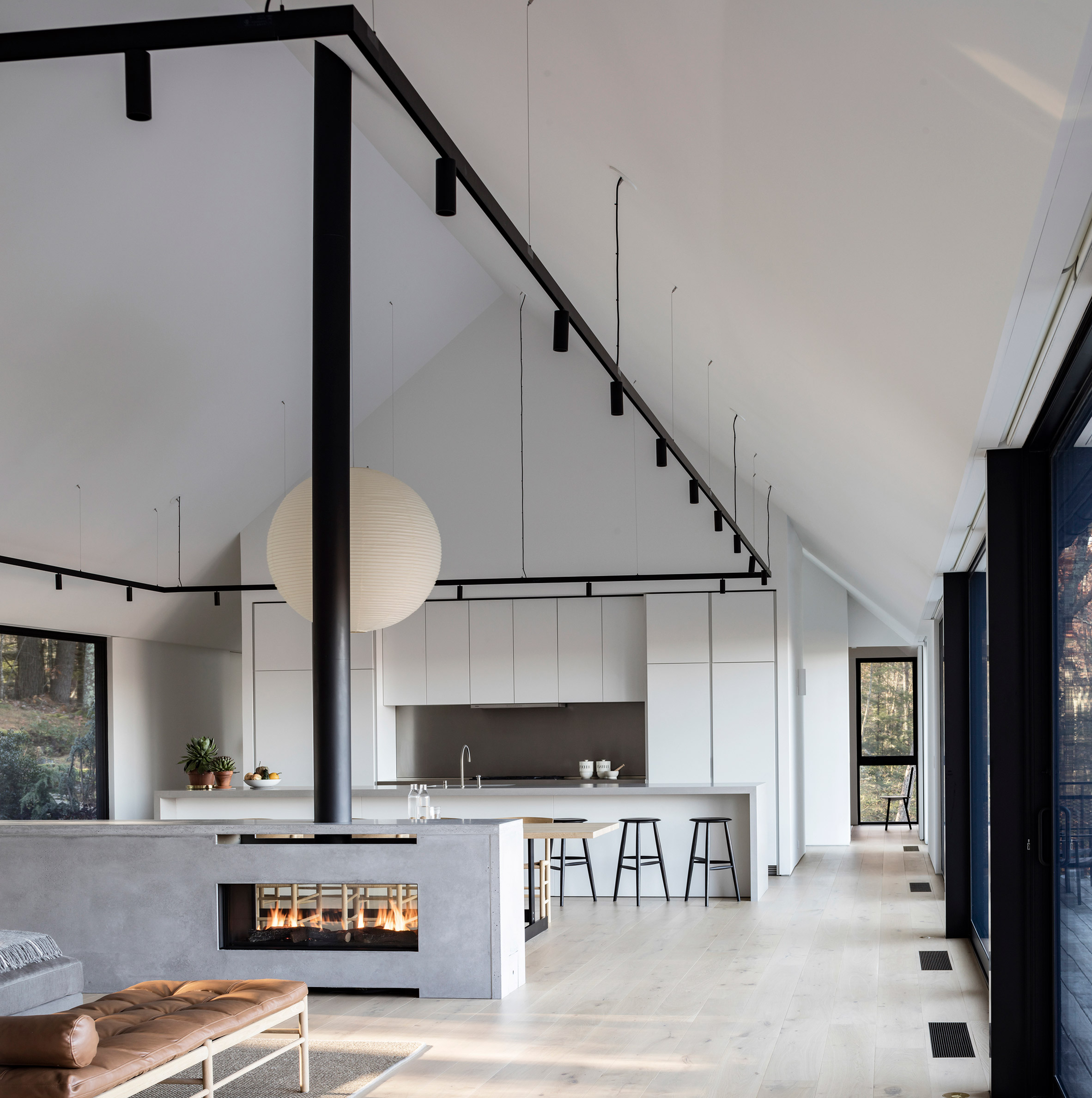 “The Ledge House clients asked us to design a new home that would resonate with the history of the Connecticut Valley, include a material palette that is environmentally friendly, and work with the challenging site on a large rock ledge,” Desai Chia Architecture said.

“The boulder is a rugged companion to the house and acts as a muse for the uphill forest views,” it added. 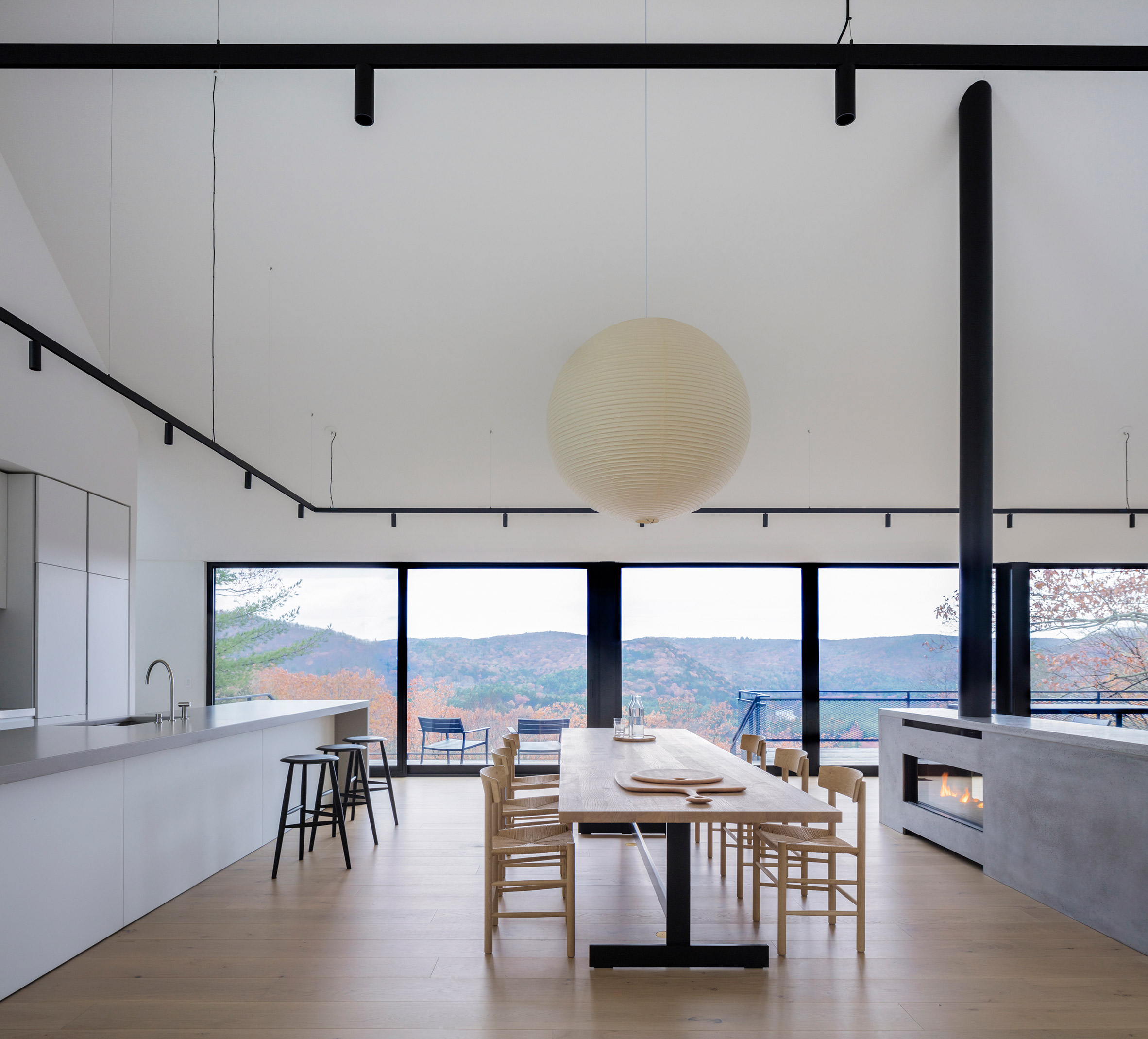 To construct the one-storey structure the studio removed an existing cabin on the property, leaving only its foundation that was then expanded to bring the house closer to the rugged ledge. Reusing the existing foundation saved the project money and also reduced construction waste.

To eliminate the need for cross bracing the studio has used balloon framing, a method that involves long studs spanning foundation to the roof that are fixed with nails instead of joinery. It takes its name balloon from being lightweight. 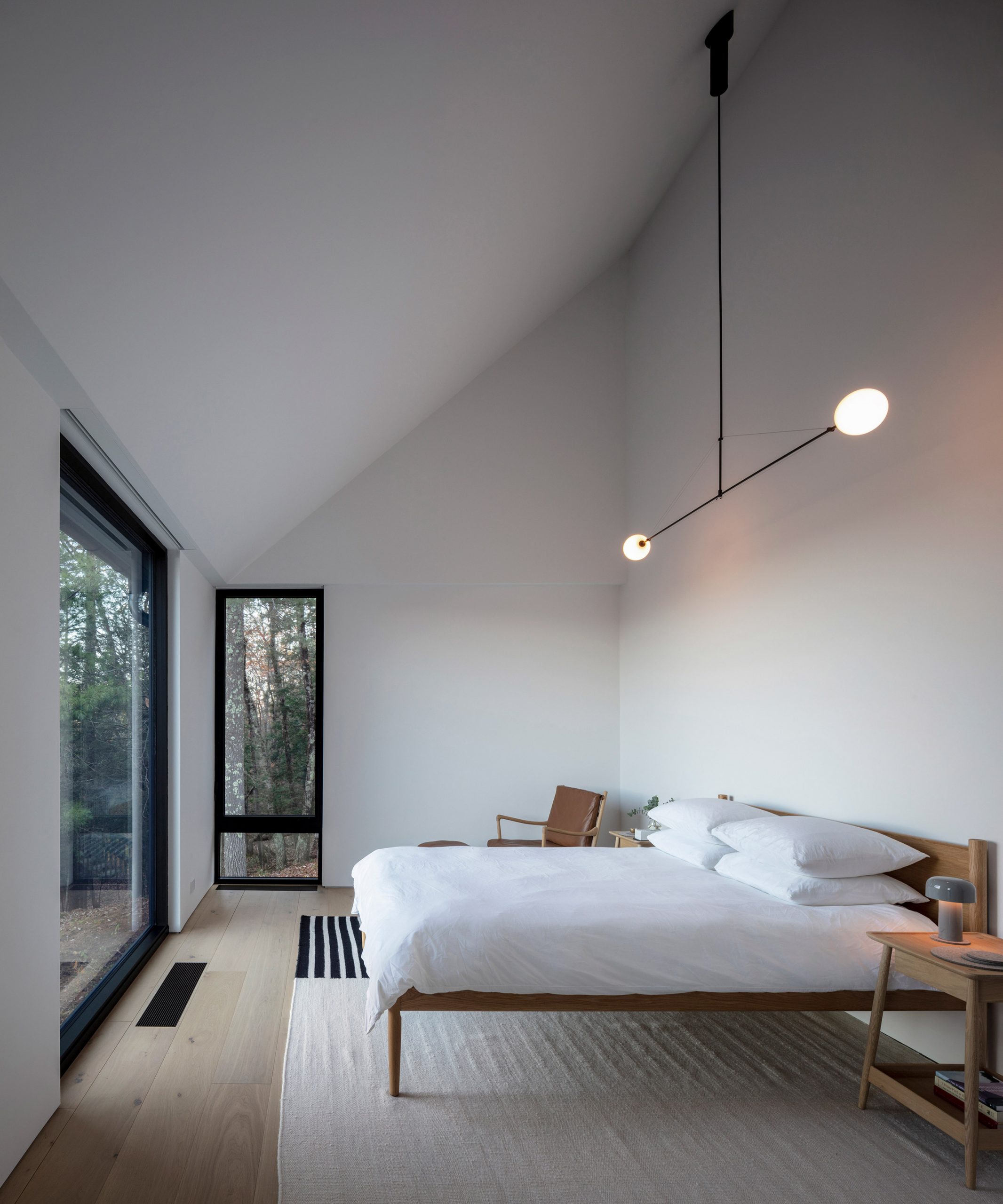 Large rectangular windows and glass doors span the length of the house on two sides providing views of the hilly landscape and boulder, while also allowing for cross-ventilating breezes to cool the house.

A wood deck attached to the back of the house overlooks the valley and is surrounded with grated metal fencing and railings. The space is furnished with chairs and a picnic table for enjoying the view from the outdoors. On the opposite elevation, an additional terrace faces a wooded forest and has pale gravel stones. 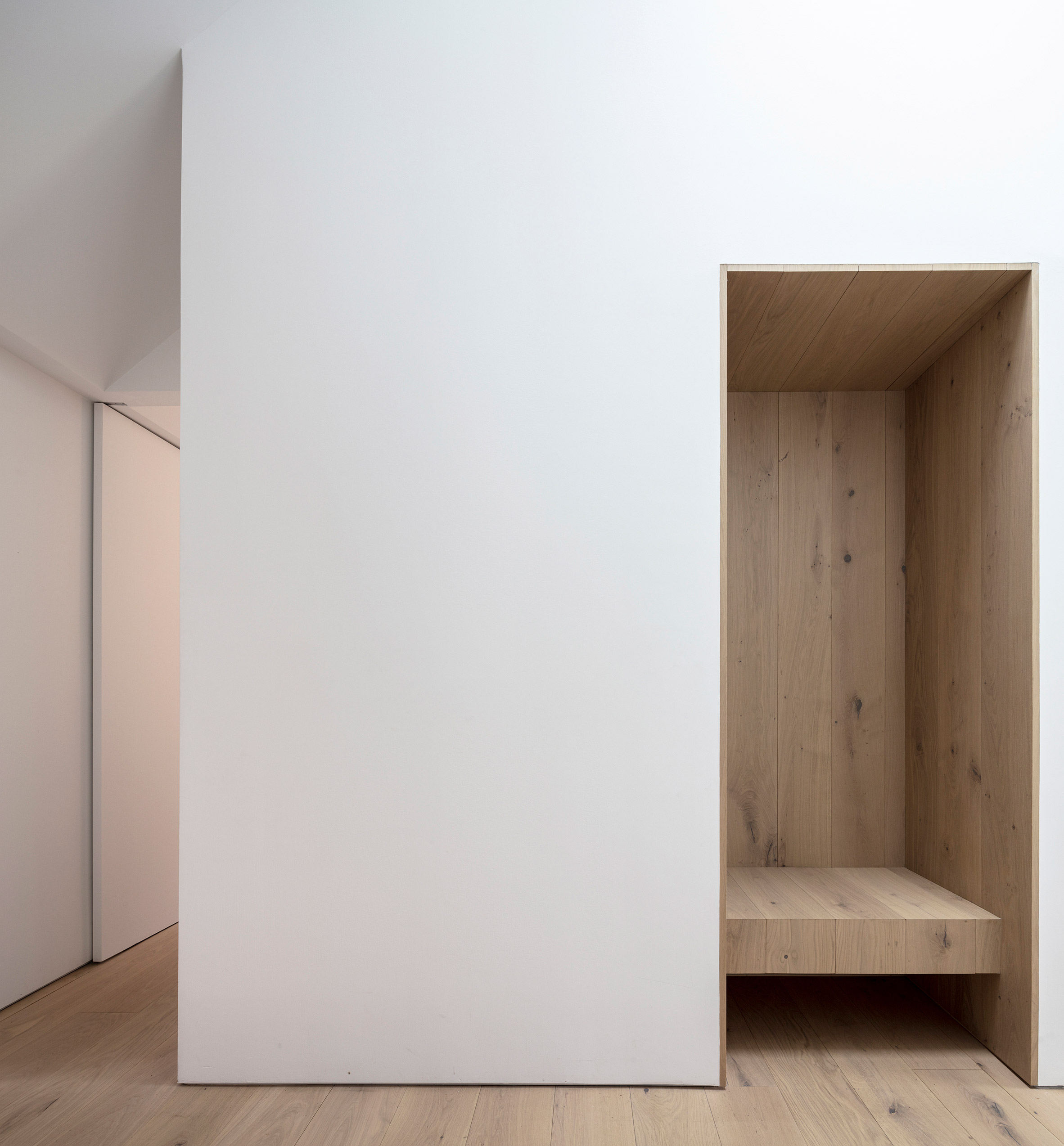 Black track lighting wraps around the open-plan room and connects to the outdoor terraces that overlook the forest and valley.

The master bedroom is situated at one end of the house, and two smaller bedrooms are at the other end. “The nucleus living area between [the bedrooms] allows the owners and their guests to merge and socialise together in a lofted, open area that connects across the ledge to a forest terrace and a valley terrace: indoor and outdoor living flow seamlessly through,” the studio said.

In the kitchen, a long island counter with black stools faces a wall of white cabinetry. 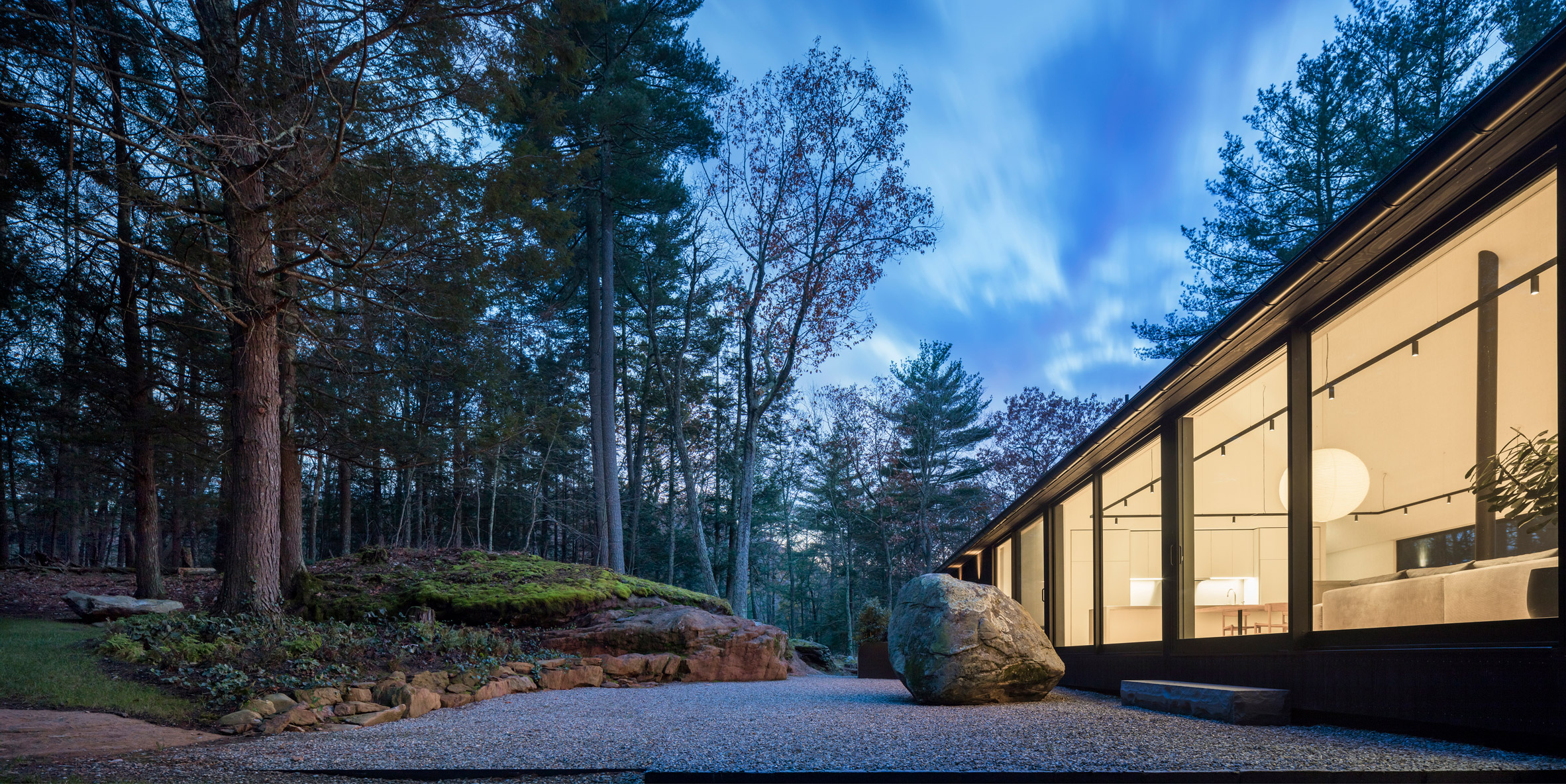 To separate the cooking and dining area from the sitting room, Desai Chia Architecture inserted a tunnel fireplace into a rectangular concrete volume. A black chimney pipe extends out from the long structure and up to the ceiling.

Desai Chia Architecture was established in 1996 by Arjun Desai and Katherine Chia. Other residences by the studio also use blackened wood, including a holiday home on Long Island and a dwelling on Lake Michigan with an angular roof.

Photography is by Paul Warchol.