Home/Five designs with a sense of humour by EJR Barnes

Five designs with a sense of humour by EJR Barnes 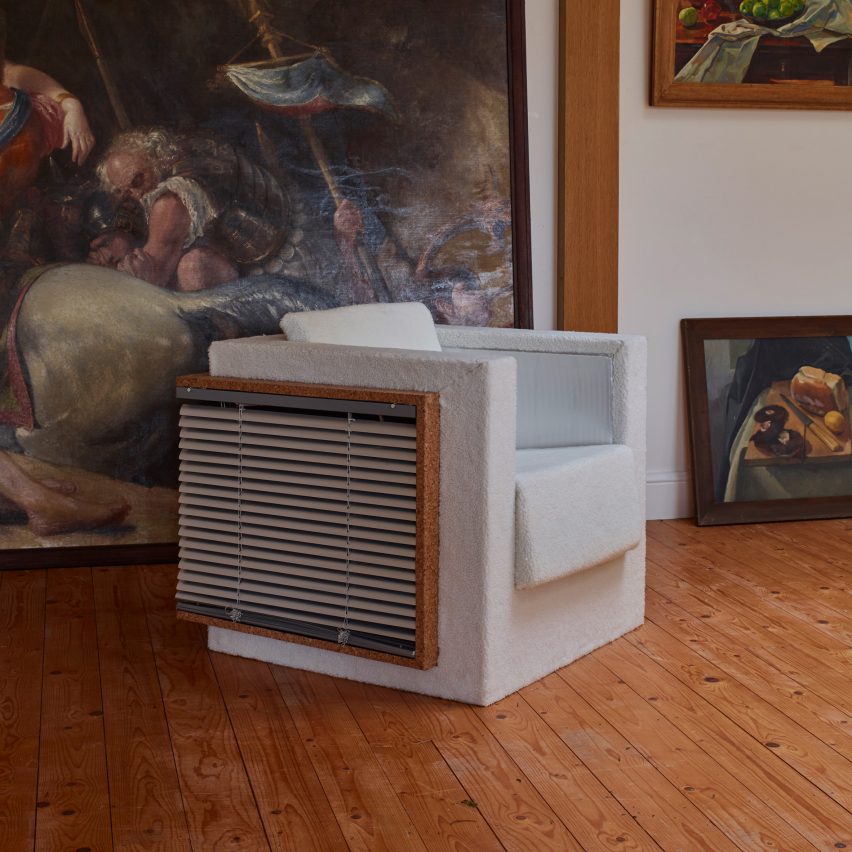 Self-taught designer EJR Barnes makes furniture and lighting pieces with “a wry smile”. We’ve rounded up five of his surrealist projects, including a club chair wrapped in Venetian blinds and a table lamp with a candle instead of a bulb.

With a background in sculpture and poetry, London-based Barnes aims to turn “floaty ideas” into functional pieces that question the purpose of the original objects.

“The main thing for me is that there is always a bit of a wry smile happening, without it looking like the whole thing is a joke,” he told Dezeen.

“To be making things like this, you’ve got to have a sense of humour. Because if you take yourself too seriously when you’re making arty furniture, then who really are you?”

A different business model for design

Barnes is one of a new generation of designers, which has been enabled by the internet to eschew traditional design education and retail systems.

He learned how to make furniture through YouTube videos, initially working from the backroom of his day job, and now sells his pieces largely with the help of Instagram.

“I’ve met some incredible clients who are interested in working with me because they’ve followed what I’ve been doing for a while,” said the designer.

“Using Instagram as a tool means that I can have this very lean business model where it’s just me in a studio and a couple of fabricators making things according to demand.”

Here, Barnes picks out five pieces that exemplify his approach: 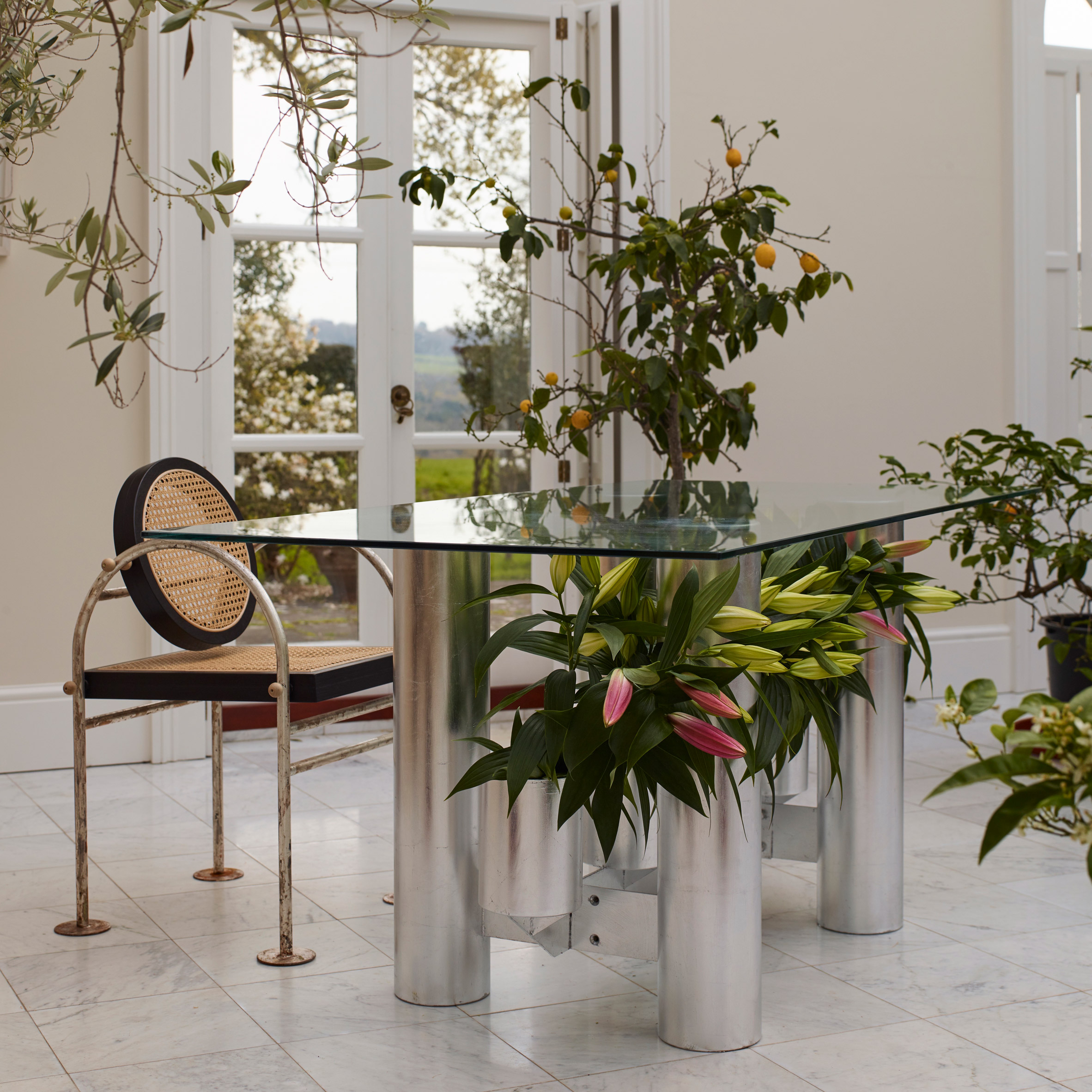 This desk, for example, features four cylindrical vessels embedded into its steel base. The client, a curator and magazine editor living in east London, is now using these to grow small orange trees.

“We got really into this idea of having a vista under your work,” said Barnes. 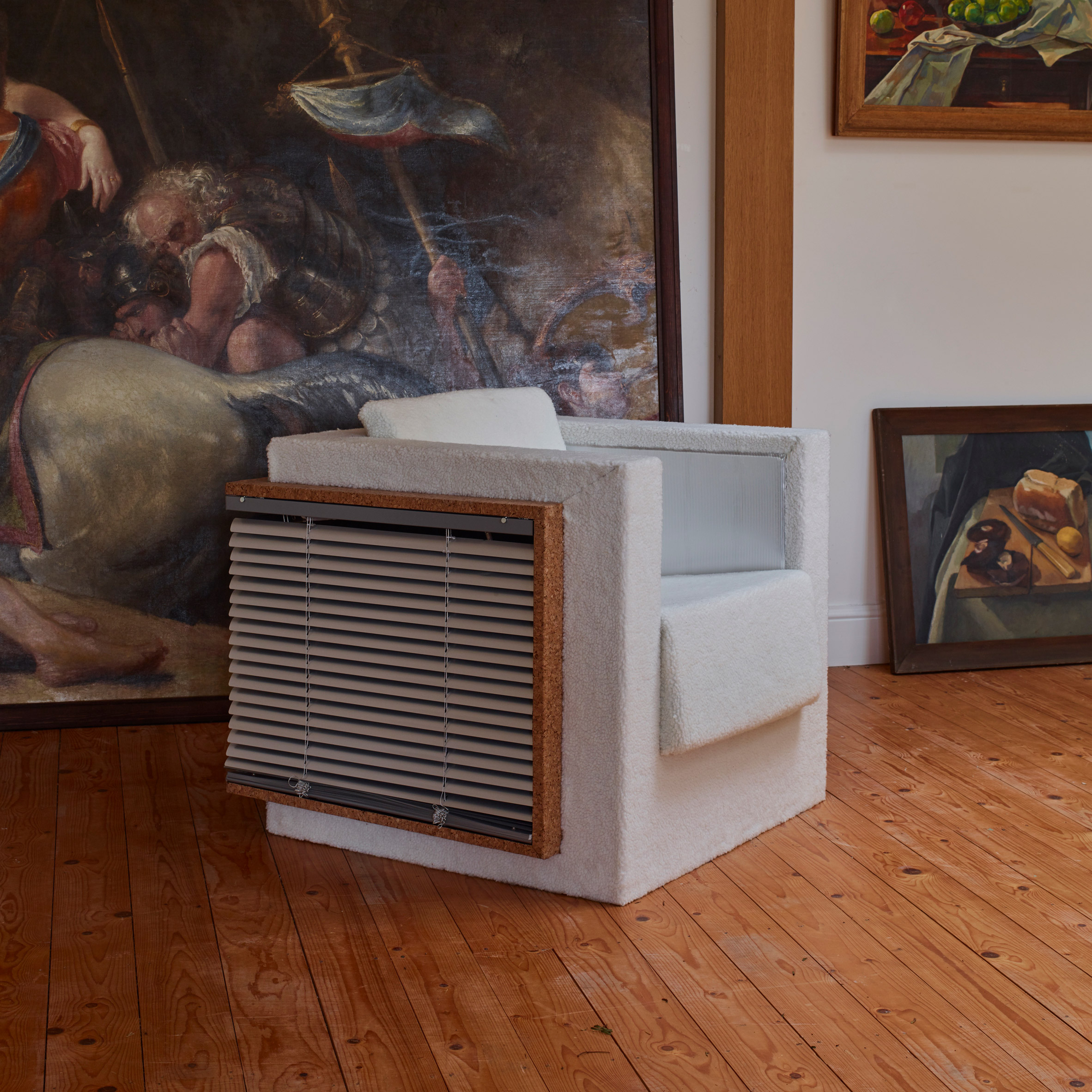 Hidden behind these is a series of strip lights, which emit an ominous glow when illuminated.

“There’s something about Venetian blinds, the patterns and the rhythm of the slats, that I really like,” Barnes explained. “You could see them in the background of a film noir, with dusty light filtering through these stayed window coverings.”

“I wanted to use this feeling I got from the blinds in something that wasn’t a window,” he added. “By using them to block out a chair it almost creates this idea that there might be something behind them.” 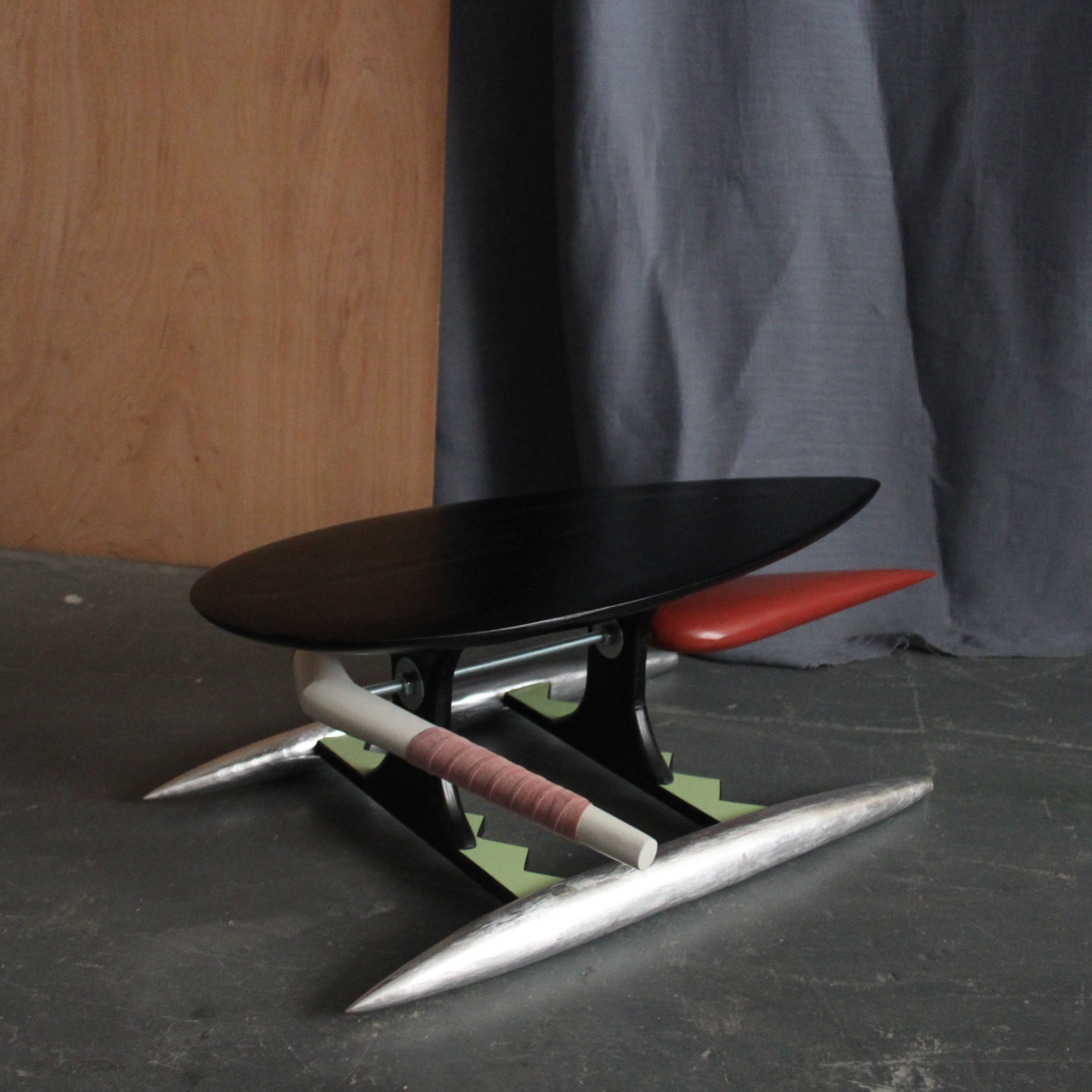 This low side table is carved from pine and other readily available construction materials, which Barnes gave the vibrant, polished finish of a vehicle.

The final result resembles a “spaceship sledge” and forms part of a larger, but largely unpublished, portion of his work that is all about sledges.

“I got really interested in people displaying automobilia and historic motorbikes in their homes. And I wanted to create fake examples of this, like fictional objects for movement,” he said.

“They never have engines or anything that’s too obviously about cars; it’s more within the sculptural form. If you look at people like [Romanian artist Constantin] Brâncuși, he did these beautiful carvings, which have a slickness to them that resembles race cars but is simultaneously very primitive.” 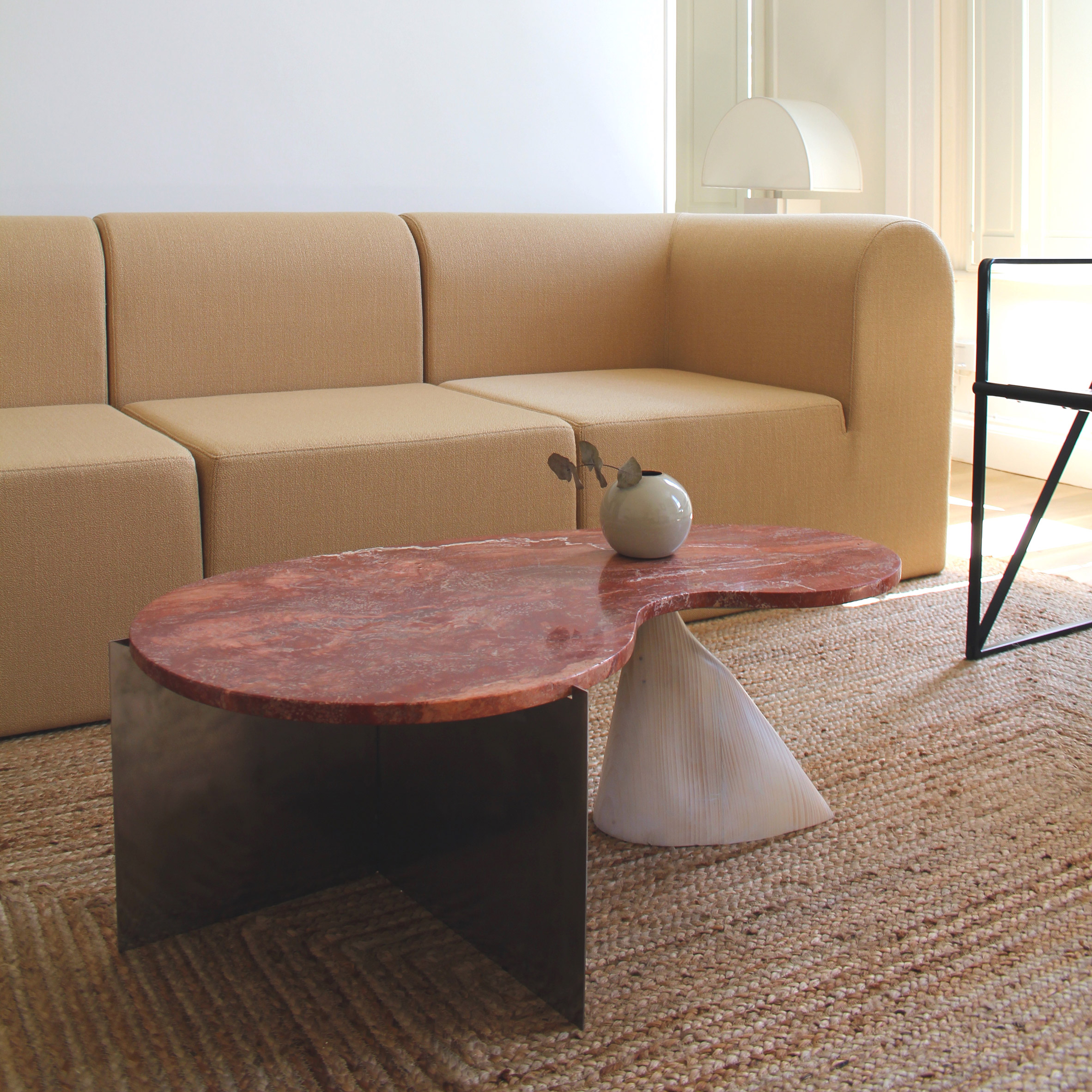 Bavette, The Glacier, A Silver Room

Since Barnes got his own studio a year ago, he has built or assembled all of his pieces himself, eliminating the need for a finalised render to send to fabricators and allowing him to take a more iterative approach.

This coffee table started from the simple idea of using a kidney-shaped tabletop, cut from a slice of red travertine that resembles the marbling of a steak.

“The process was almost like assembling a collage,” he said. “As soon as I had the idea in my head that the tabletop was a slab of meat, the client and I started a conversation about what other shapes could work as part of the assemblage, rather than just thinking about them as table legs.”

“It was more like creating a piece of art than a design. You can make a mark, decide it’s wrong and change the whole thing or make another mark and take another step and go in a different direction with it.” 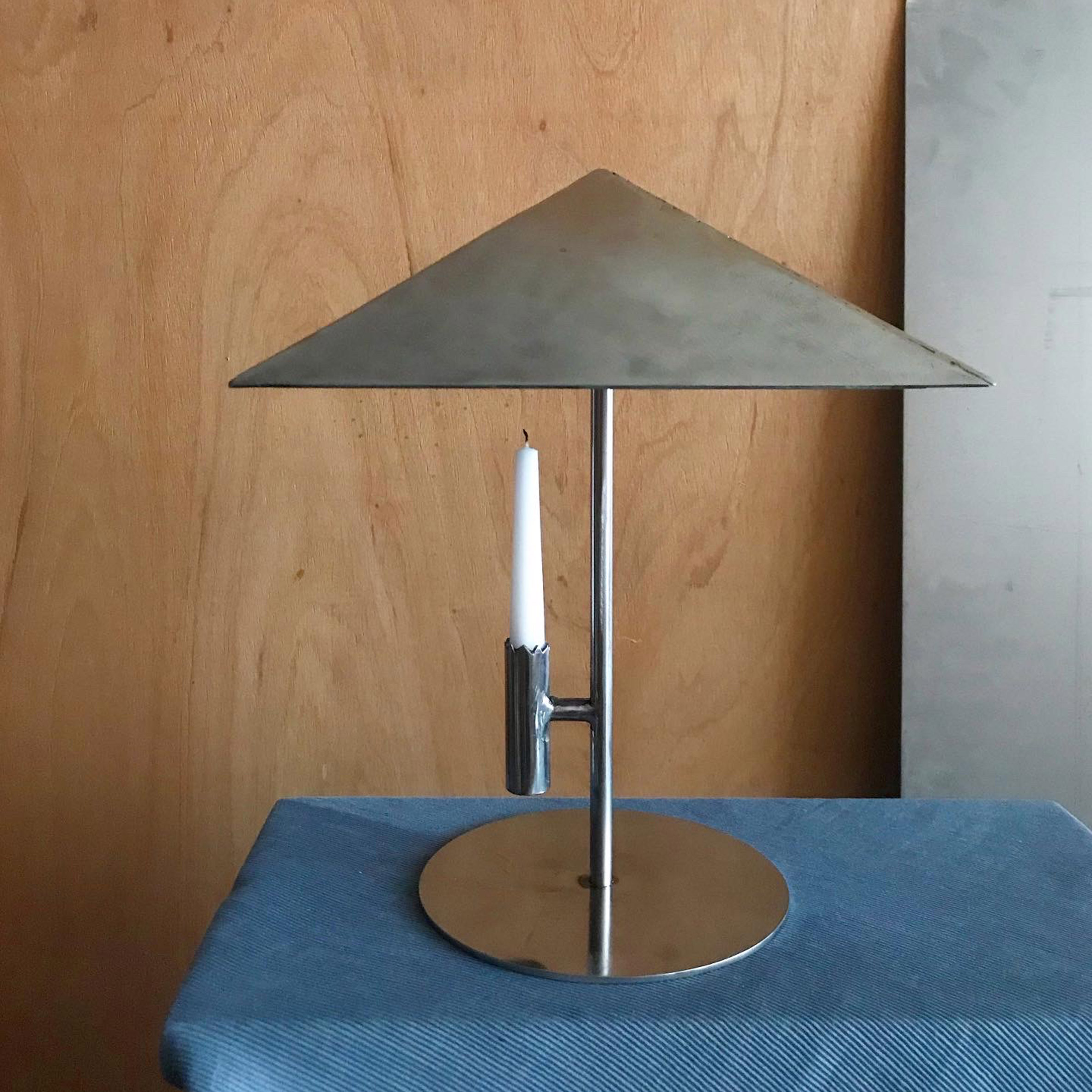 This candle holder is one of several metalwork pieces created by the designer during the coronavirus lockdown, while he taught himself how to weld.

The design is Barnes’ take on the classic Armani Casa lighting range, which features “variations of a pyramid on a stick”. Here, this motive is rendered entirely in metal and with a candle instead of a lightbulb.

“It’s a bit of a joke, really. An analogue table lamp is like the ouroboros of design eating its own tail because we invented electricity to get rid of candles but people want the look of both, no matter if it’s not functional,” said the designer.

“I want to be playful with form but without sacrificing subtlety. A lot of people, when they say they prioritise form over function, create these crazy, pink, fluffy wherever. Whereas I still want things to be quite reserved.”

The post Five designs with a sense of humour by EJR Barnes appeared first on Dezeen.