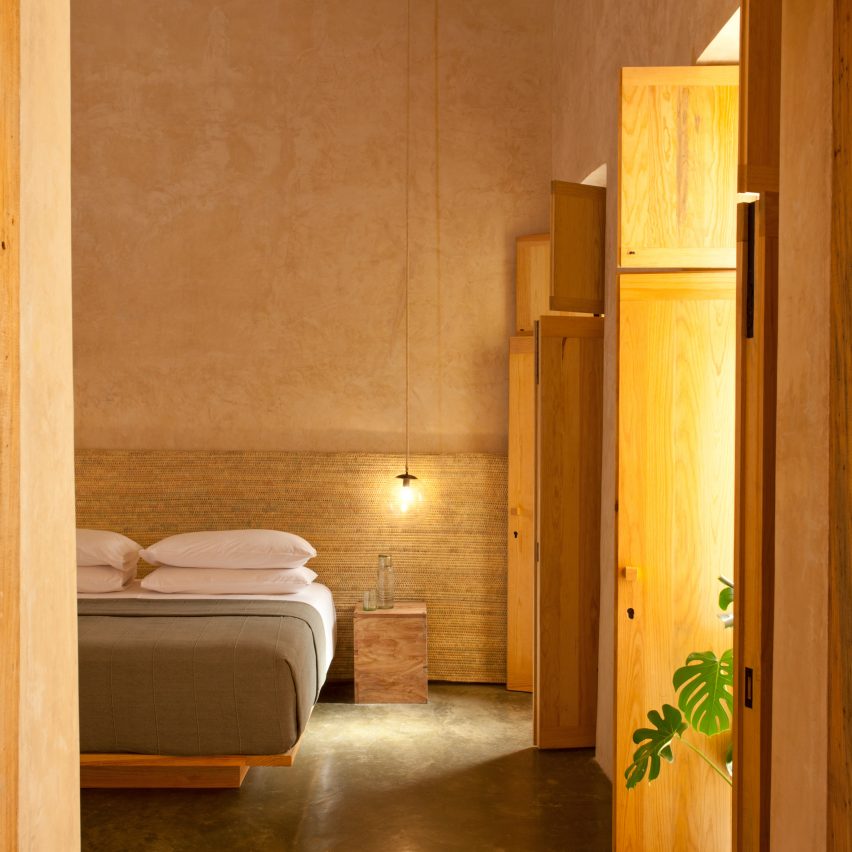 Interiors studio Decada Muebles has filled this boutique hotel in Oaxaca City, Mexico with pieces made by the region’s artisans.

A majority of the Escondido Oaxaca Hotel takes over a former family home that dates back to the 19th century.

Inside are four of the hotel’s total 12 guest rooms – the last eight are located just beyond the house within a more contemporary concrete tower erected by architect Alberto Kalach. 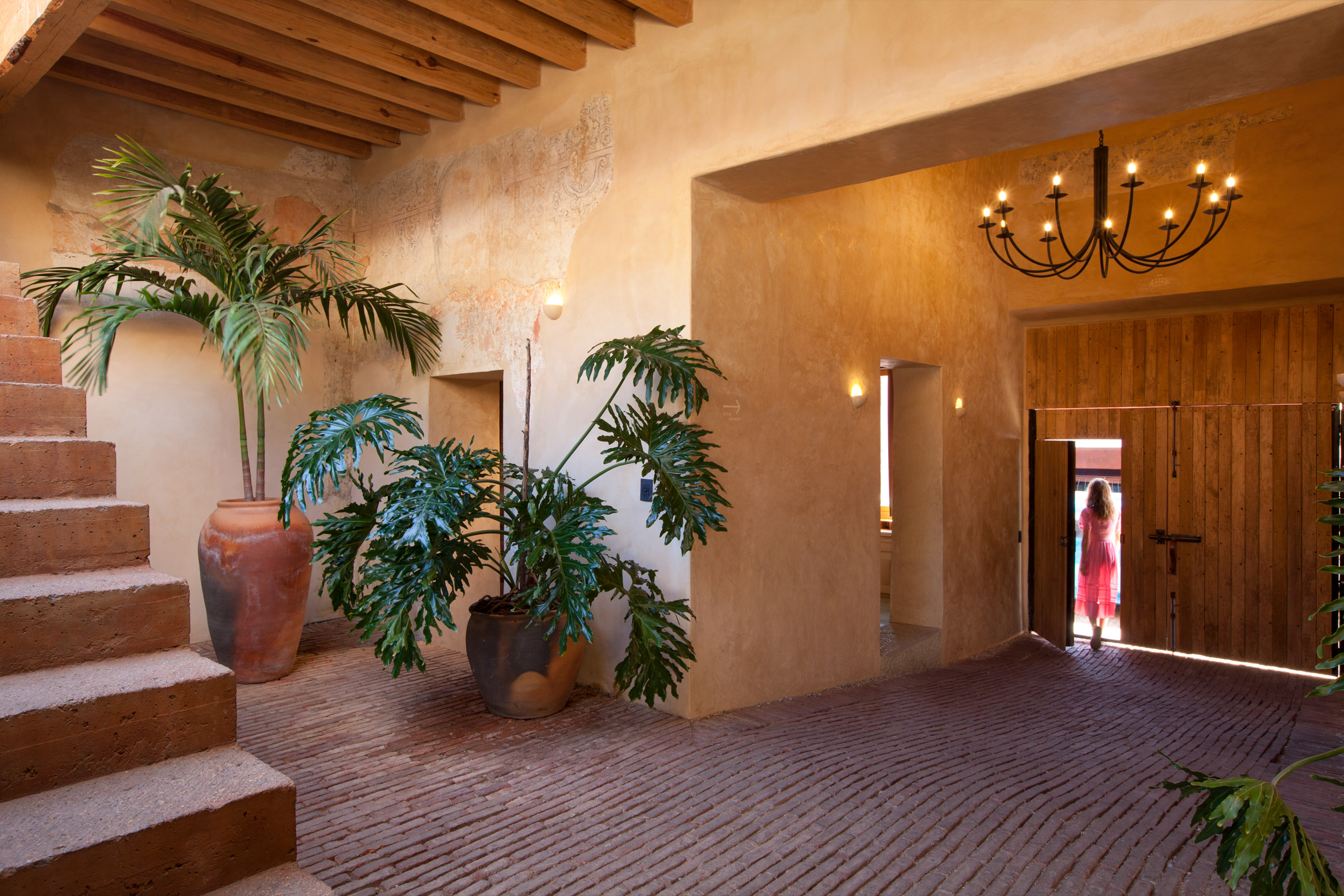 This mixture of old and new influenced Decada Muebles‘ design of the hotel, which has been almost exclusively decked out with pieces crafted by local craft makers.

“We wanted to create a feeling of timelessness inside an authentic Oaxacan house, where the guests could feel the presence of a craftsman’s hand through their work in every nook and cranny,” the interior design studio told Dezeen.

“With a mix of minimalism and clean lines in our furniture choices, and the lush landscaping and garden design, we aimed to maximize the possibility of relaxation and sense of serenity as the underlying state while at the hotel.” 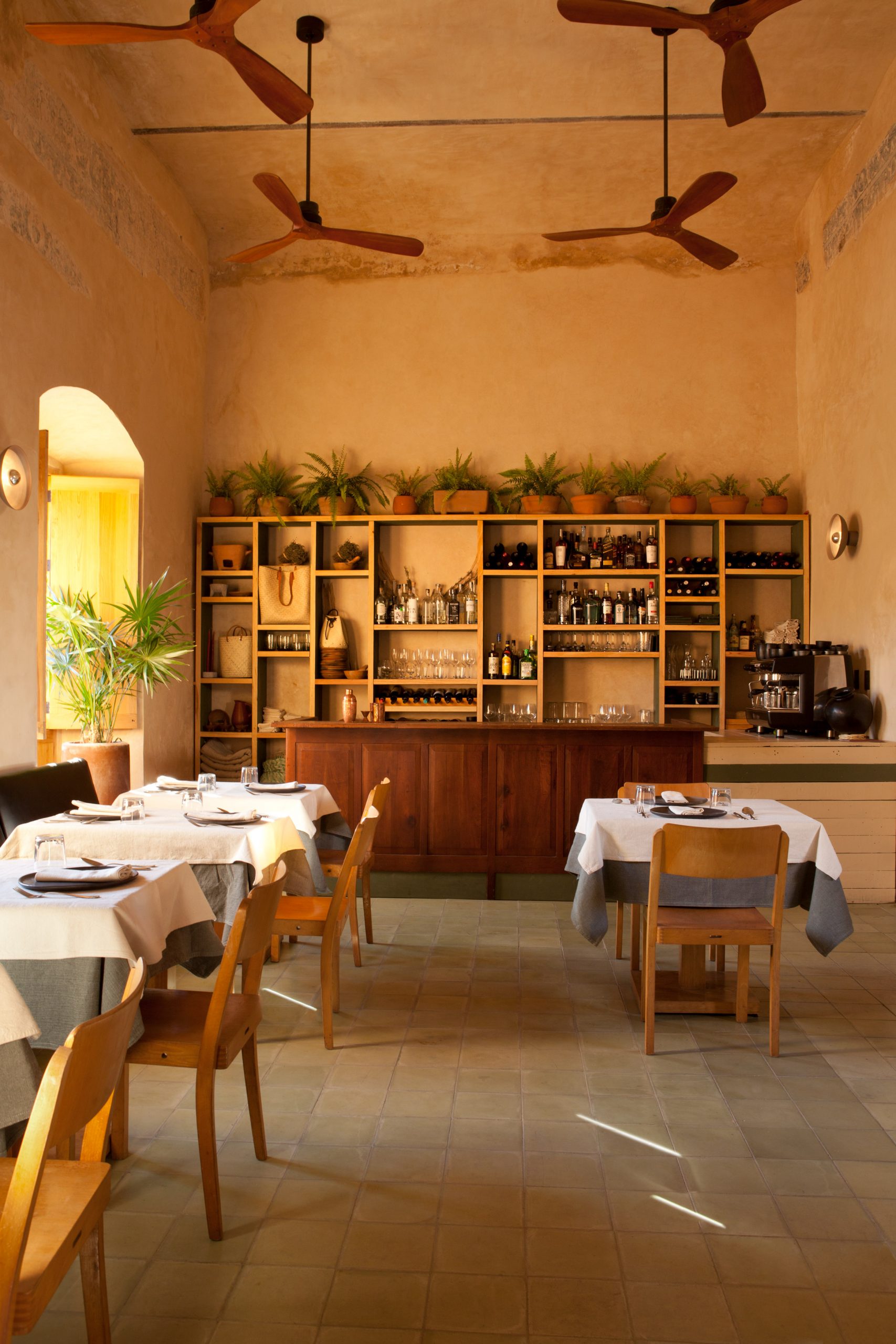 Guests enter the hotel via the old house, walking through a spacious lobby that’s dotted with oversized terracotta plant pots.

Red bricks run across the floor, while the walls are loosely rendered with stucco – faded patches of paint left behind from the house’s old fit-out are still visible.

These rustic walls continue through into the restaurant, which serves up a menu of Mexican fusion food. 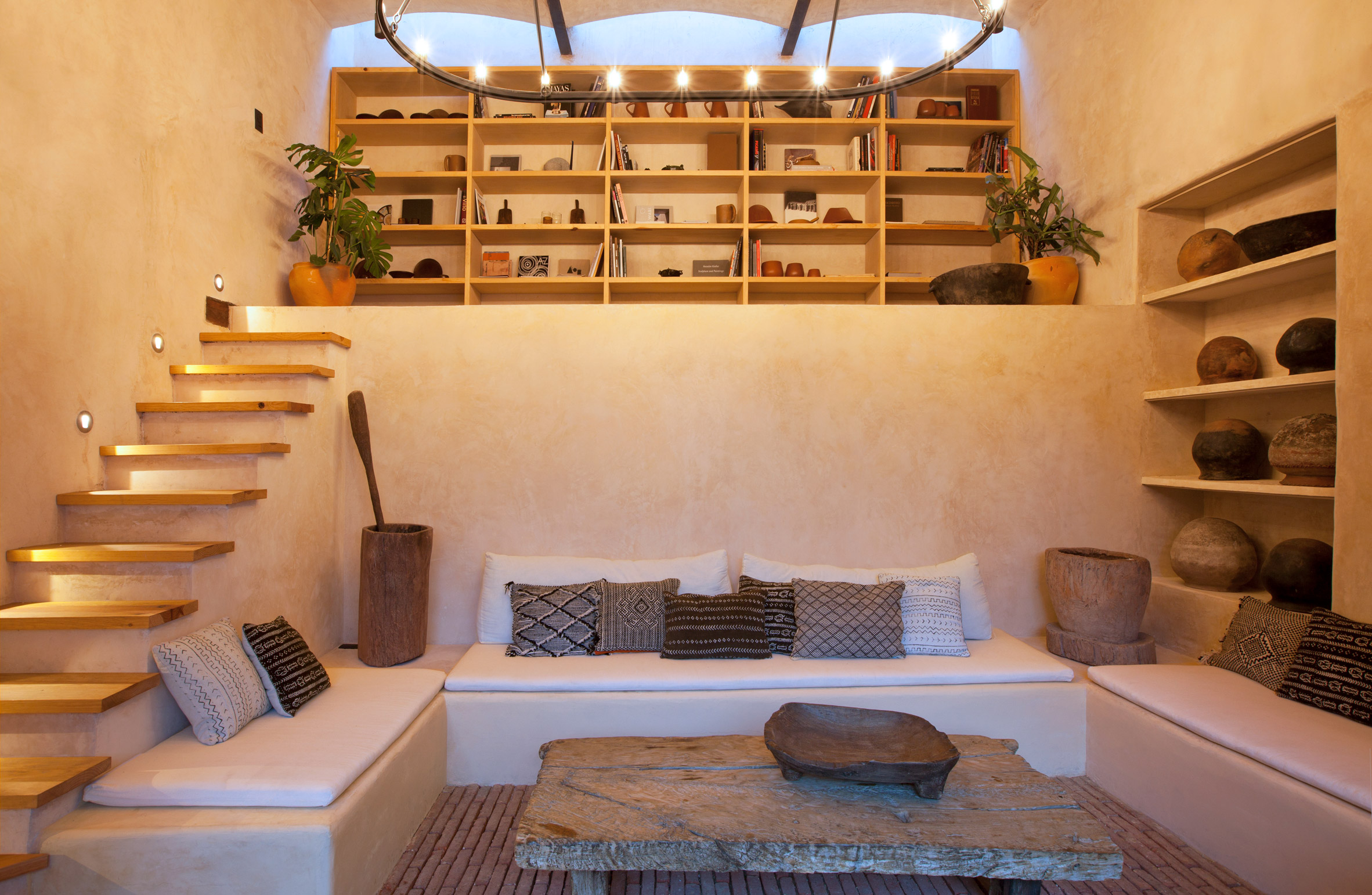 Local craftsmen have used Sabino, a Mexican wood, to make the tables and chairs that appear throughout the room. They complement a gridded timber shelving unit that openly displays liquor bottles and glassware.

The floor here is clad with locally sourced green-cement tiles – the colour was specifically chosen in a subtle nod to Cantera, a green-hued volcanic rock that’s native to Oaxaca and used to build several of its buildings and roads. 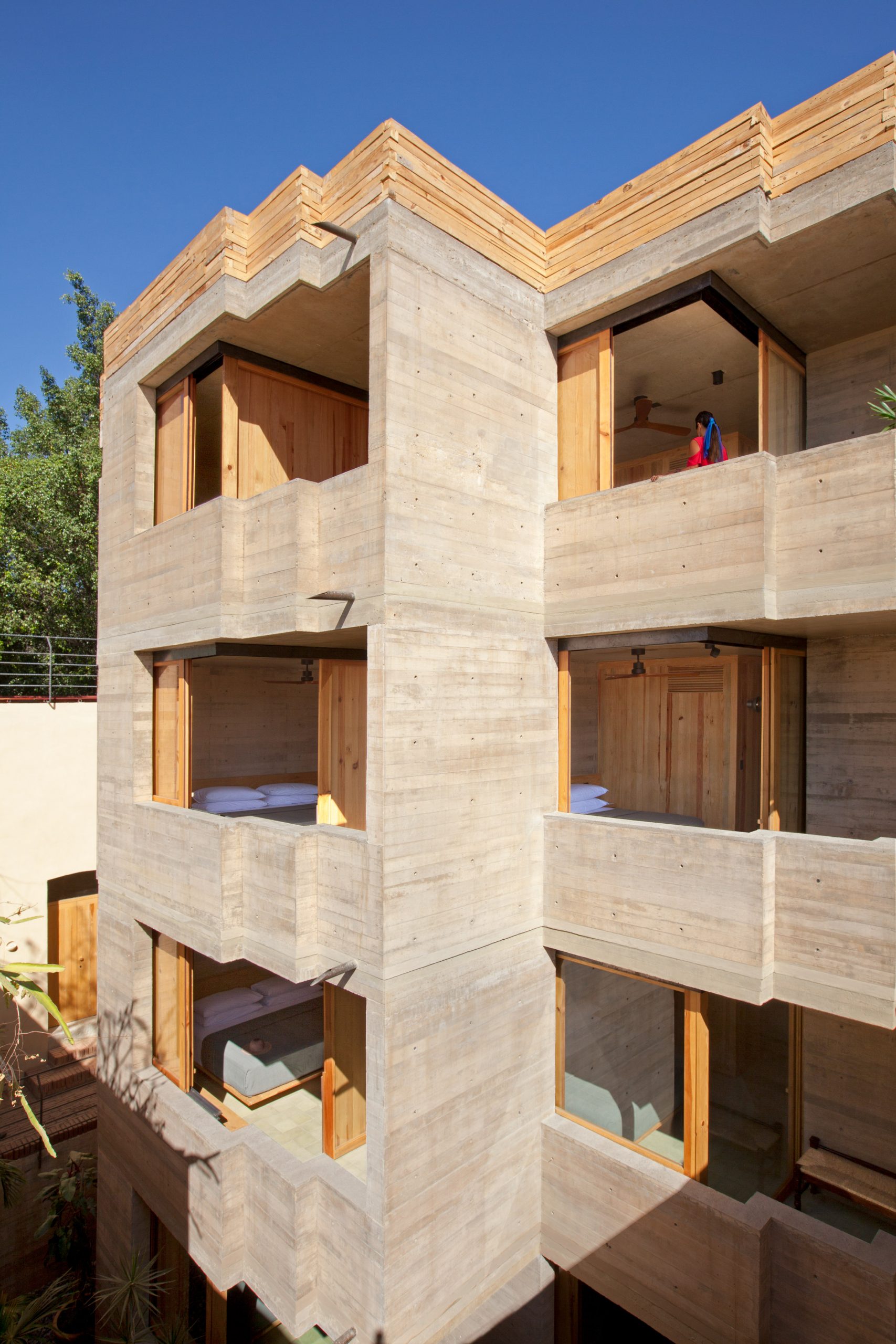 When they’re not relaxing around the pool, which is up on the roof, guests can head to the split-level “culture room”.

It includes a small library and a cosy sofa area decorated with earth-tone vases. 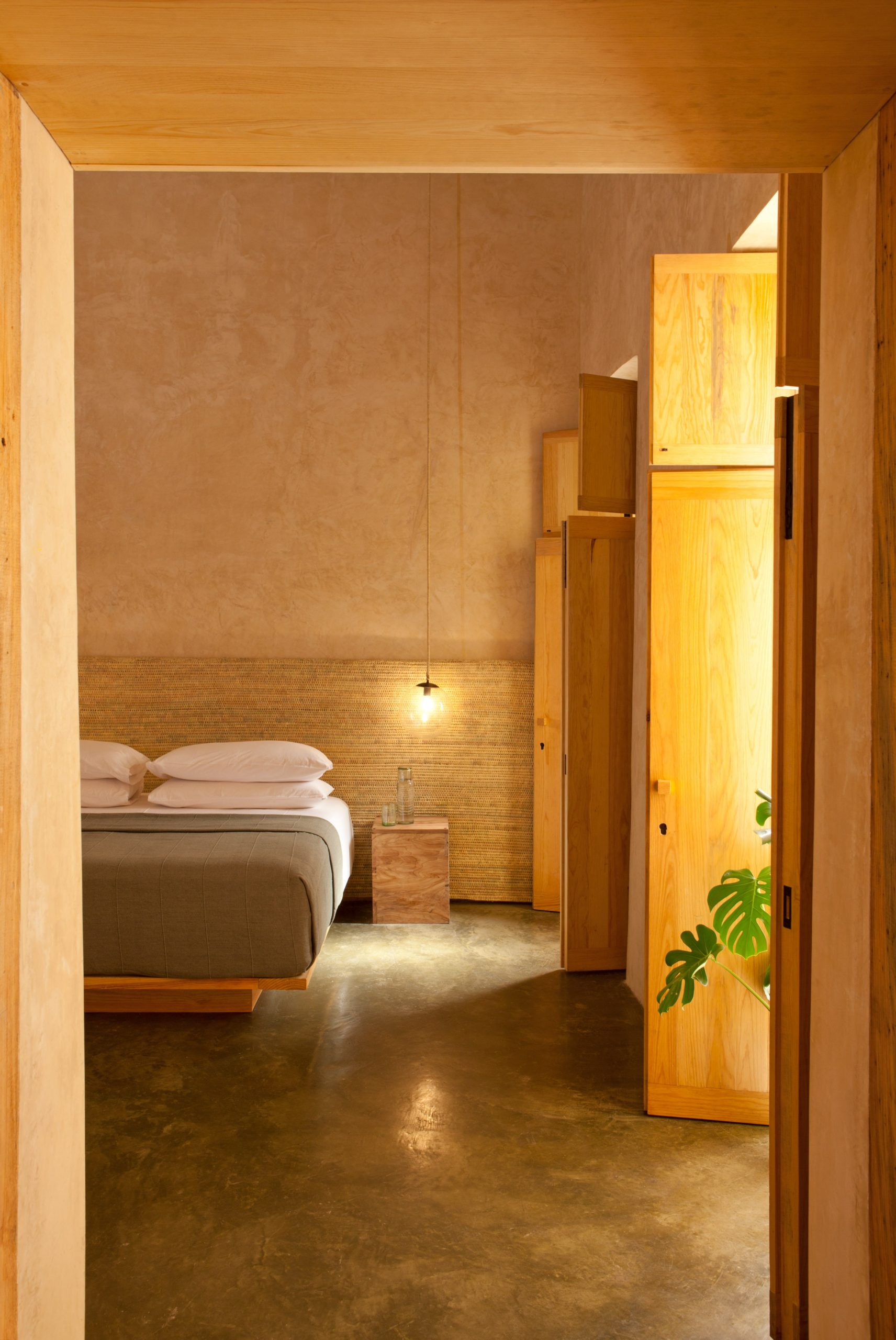 Guest rooms in the old house and the concrete tower have been finished in the same material palette that’s been applied throughout Escondido Oaxaca Hotel’s communal spaces.

Green-tinted cement tiles cover surfaces in the en-suite bathrooms and Sabino wood has been used to create the rooms’ side tables, bed frames and shutters, which can be pushed back to reveal balconies or foliage-filled patios.

Details like the woven palm leaf headboards were also custom made in Oaxaca. 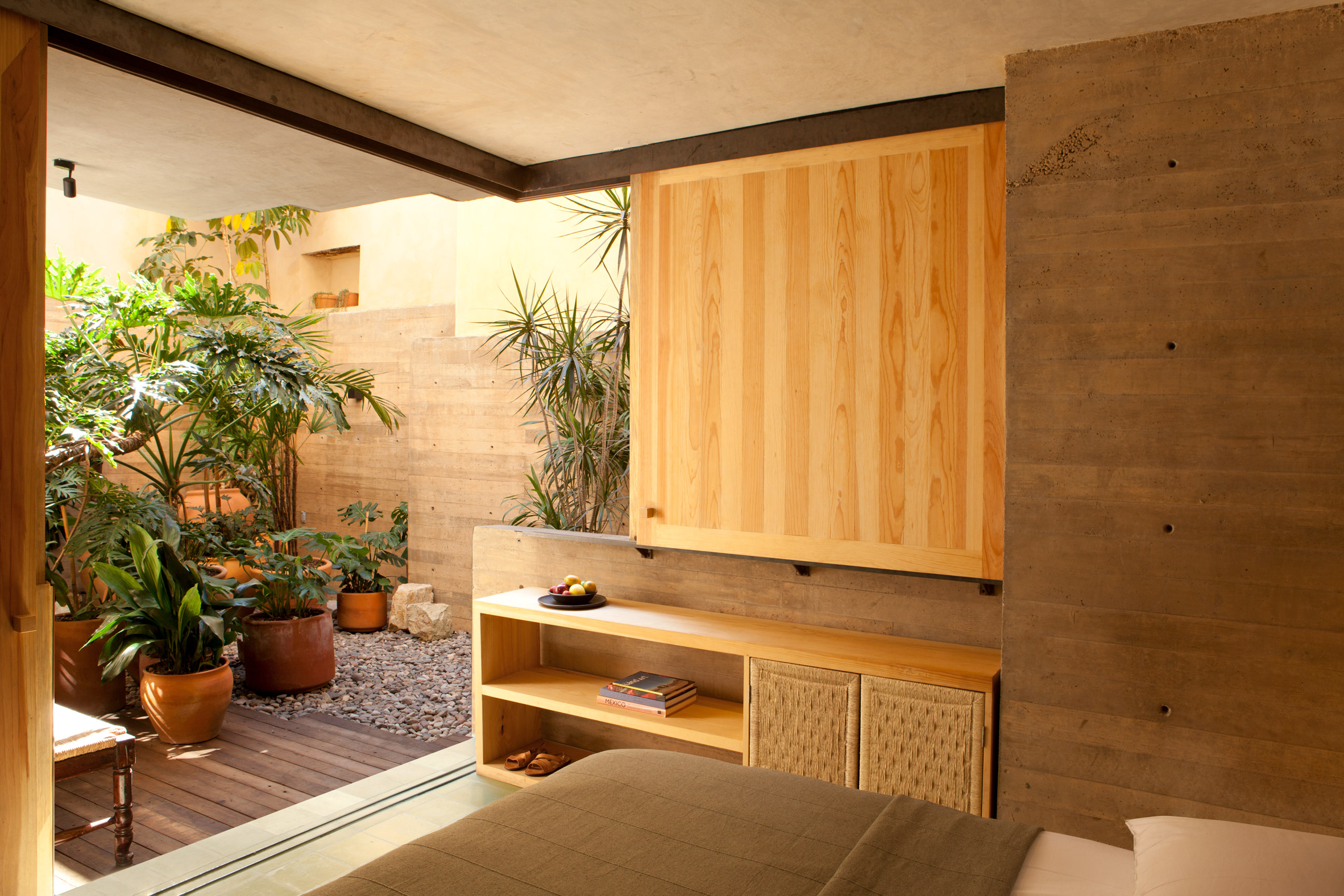 Escondido Oaxaca Hotel is longlisted in the hotel and short-stay category of this year’s Dezeen Awards.

It will compete against the likes of Trunk House, a boutique hotel in Tokyo that includes a miniature disco, and Casa Palerm, a guest villa in Mallorca which is fronted by a huge cinema screen-like window.

Photography is by Undine Pröhl.