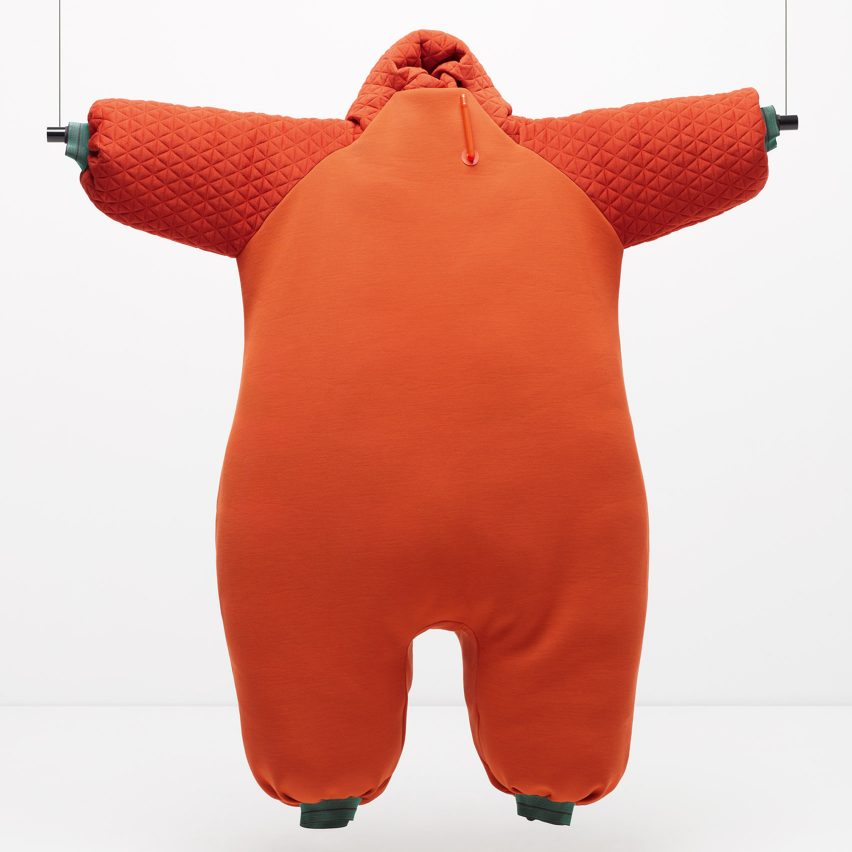 Kvadrat‘s Knit! exhibition, which forms part of 3 Days of Design, sees 28 designers create a variety of objects upholstered in its Febrik textile range, from sofas and dining tables to a giant squishy ball and whimsical flight suits.

Debuting in Copenhagen during 3 Days of Design as both a physical and digital show, the Knit! project aims to explore the potential of the knitted textiles in Kvadrat‘s Febrik collection.

Ilori’s creation is a seating system called A Trifle of Colour, which looks at the chair as a “social tool”. Made from multiple-layered sheets of ply-board that are individually upholstered in Kvadrat Febrik’s Sprinkles textile, the chair-bench hybrid features removable and adjustable backrests.

Other designers who opted for seating design include Ana Kraš, who created the Ofset Chair from six quadrilateral planes, and Ania Jaworska, who designed structured chairs intercepted with geometric cushions.

Other figures went for more unconventional designs, including Lebanese designer Paola Sakr, who made a series of tableware from textile moulds, and Venice-based design practice Zaven, which used the textiles to create a series of utopian “flight suits”.

Zaven’s suit designs are informed by the image of a squirrel jumping from trees, an airplane flying through the sky and an astronaut floating in space.

Copenhagen-based Marie Sloth Rousing, on the other hand, created conceptual garments that combine the elements of both a chair cover and a shirt, and can be worn by both objects and people.

Each pillar is comprised of stacked textile sections that start to spin independently at varying speeds in different directions when approached by viewers.

A giant, squishy ball by Swiss industrial designer Michel Charlot was also created as part of the show, as well as a room divider by Malmö Upcycling Service (MUS) and a reclined seat by Studio Truly Truly that features a bulbous cushion supported by a clear glass base.

Fabric surrealism-inspired characters by Benja Harney also feature in the exhibition, alongside a series of blankets by Studio Bertjan Pot that have been hemmed using coloured duct tape and a padded bag strap by Giulia Chéhab.

The Copenhagen festival, 3 Days of Design, is taking place in the Danish capital from 3 to 5 September 2020. The event was initially due to take place in March this year, but was postponed as a result of the coronavirus pandemic.