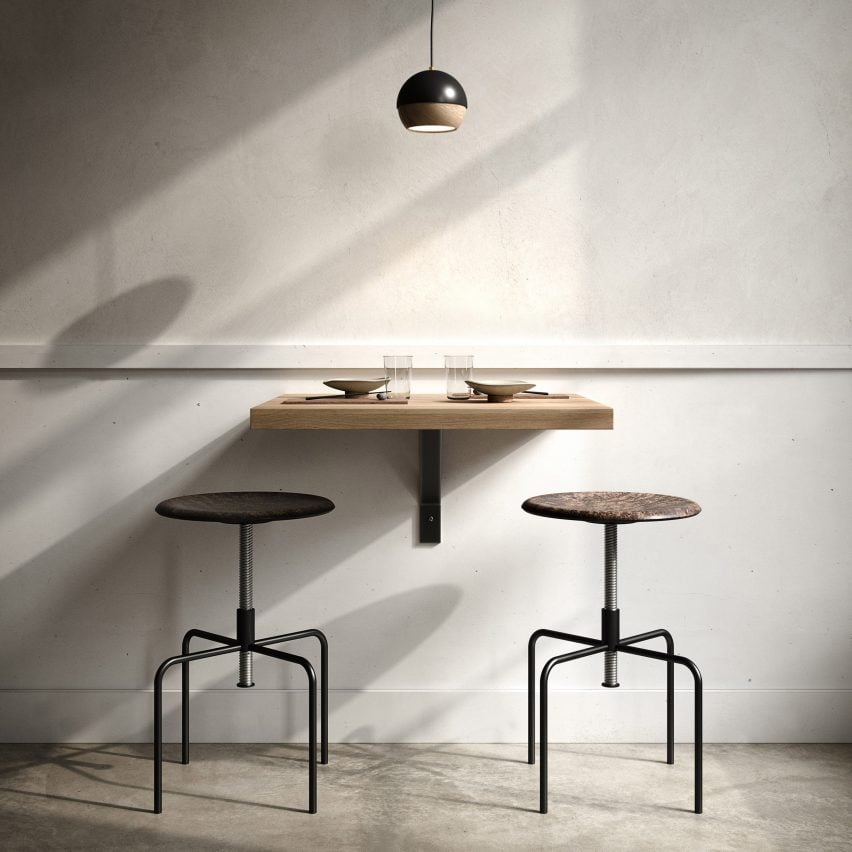 The stool, which was featured as part of the brand’s Circular Design Exhibition at the hotel Villa Copenhagen in the Danish capital, was designed by Danish architect Eva Karlou.

The exhibition also included a new version of the Earth Stool, which is made from the discarded plastic of insulin pens.

Mask Stool is made using a sustainable design technology Mater developed together with the Danish Technological Institute and the University of Copenhagen, which mixes fibre-based materials with plastic waste.

Spent grain leftover from Carlsberg’s beer production process, called mask in Danish, is used to create the stool. The wet fibre-based mass is dried and then combined with a granulate of plastic waste to create a mixture that can be moulded into furniture.

The designers did a lot of testing before getting the new material right, and it has opened doors to several new material possibilities.

“It’s not only challenging, but it’s also very interesting because now we know how to do this,” Karlou said.

“Now we can use not only the spent grain but also coffee beans and wood chips,” added the architect. “This production method is unlimited. We can scale it up and do collaborations with all kinds of different industries to take their waste and turn it into great design.”

Karlou and Mater work together under the Earth Studio moniker. The partnership is located next to Mater Earth Gallery in Copenhagen and works on architecture and interior concepts, furniture design and development of new sustainable materials.

Earth Studio has previously launched the Earth Stool, which is partly made from recycled plastic packaging waste. At 3 Days of Design, Mater showed a new version of this stool.

The Novo Nordisk plastic waste came from discarded insulin pens, which were heated in a specially developed machine. The mass was then moulded, using a production process that was also developed together with the Danish Technological Institute with support from the University of Copenhagen.

“We are known in Denmark for having Novo Nordisk, which is the global leader on insulin pens for diabetes,” Mater founder and CEO Henrik Marstrand said. “The waste produced from this is converted with heated coffee beans in a 50-50 mix.”

“This is the way our company is going,” he added. “It’s looking at converting the waste stream into products without any compromise on aesthetics or material finishing.”

The exhibition also included the Nova Sea Chair, which was made from 96 per cent discarded fishing nets and hard plastic for Villa Copenhagen by Mater, in collaboration with Danish design studio Arde.

The fishing nets are sourced from the world’s only recycling plant for these nets, which is located in Denmark and pays fishermen for their used equipment to save them from being dumped in the ocean.

As part of 3 Days of Design, Karlou and Mater also unveiled a new hotel room at Villa Copenhagen, with interiors made using sustainable materials including recycled wood and plastic.

Bricks taken from the construction site when the hotel was built were crushed and turned into a paste that was used to clad the walls.

Though the design has only been implemented in one room, for now, Karlou said she hopes what Earth Studio learns from its design will eventually be repeated in other rooms at Villa Copenhagen.

“Some of these things are really ‘learning by doing,’ but that’s also great sometimes because we have got to have a playground,” she said.

3 Days of Design is Denmark’s annual design event and was originally set to take place in May, but the festival was postponed due to the coronavirus pandemic.

The post Mater designs stools made with leftover grain from beer and plastic insulin pens appeared first on Dezeen.