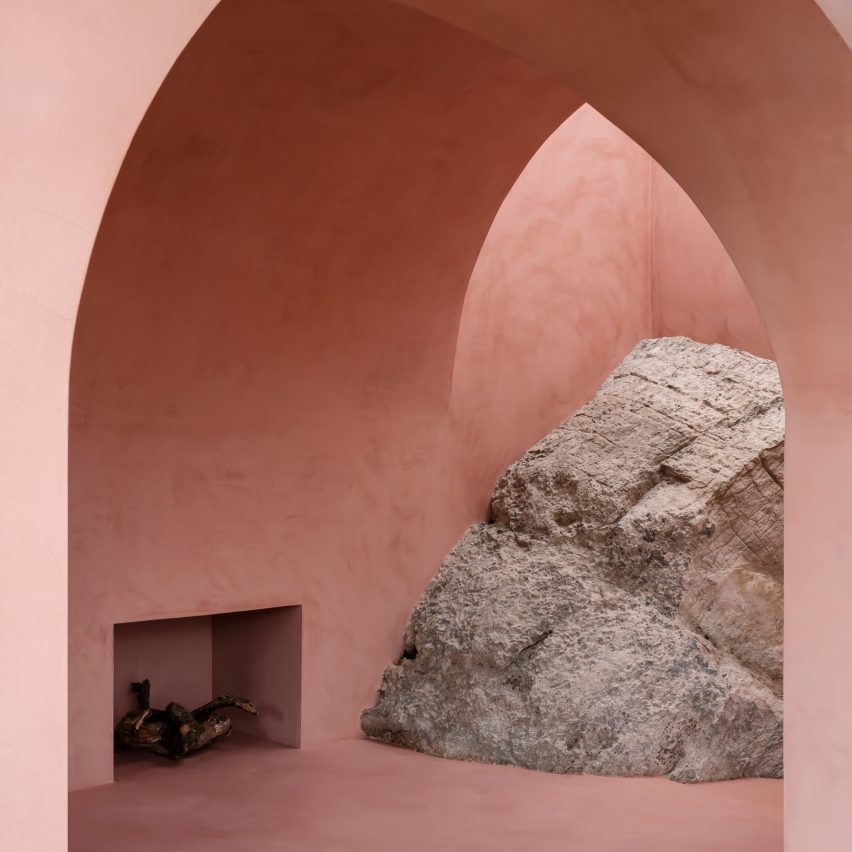 Craggy boulders jut through walls in these off-grid guesthouses that architecture studio Mar Plus Ask has built in Mallorca, Spain, for creatives in need of a quiet escape.

Tucked away high up in Mallorca’s Tramuntana mountains, The Olive Houses are run year-round by Mar Plus Ask as a silent refuge where solo architects, writers and artists can stay free from interruption. 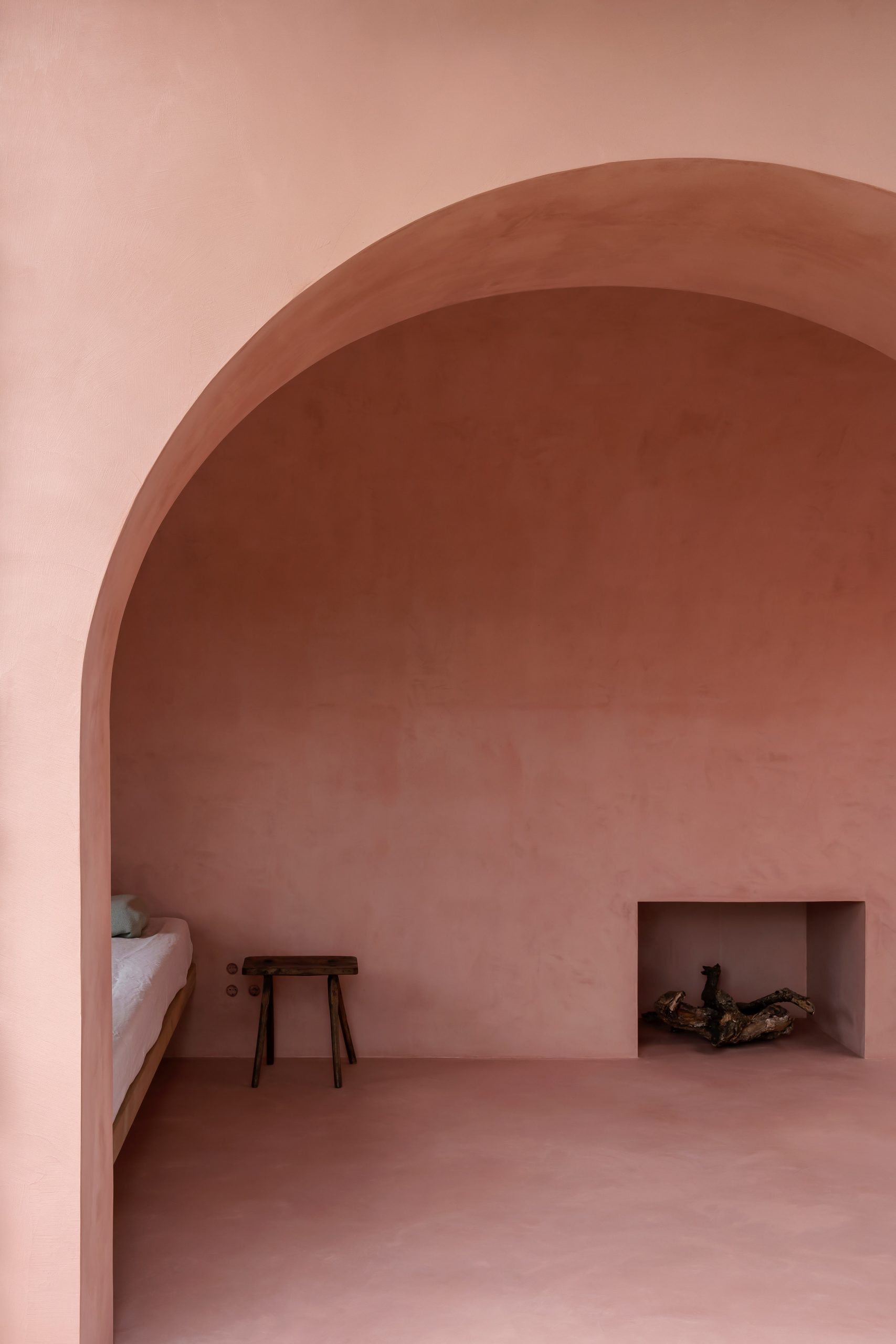 The pair of off-grid houses are enclosed by a dense grove of thousand-year-old olive trees, which at points is interrupted by huge boulders resembling “natural monumental sculptures”.

Keen to leave this rugged terrain largely untouched, Mar Plus Ask set about designing two modest structures – one that accommodates sleeping quarters, the other cooking facilities – that look like homes in the surrounding landscape. 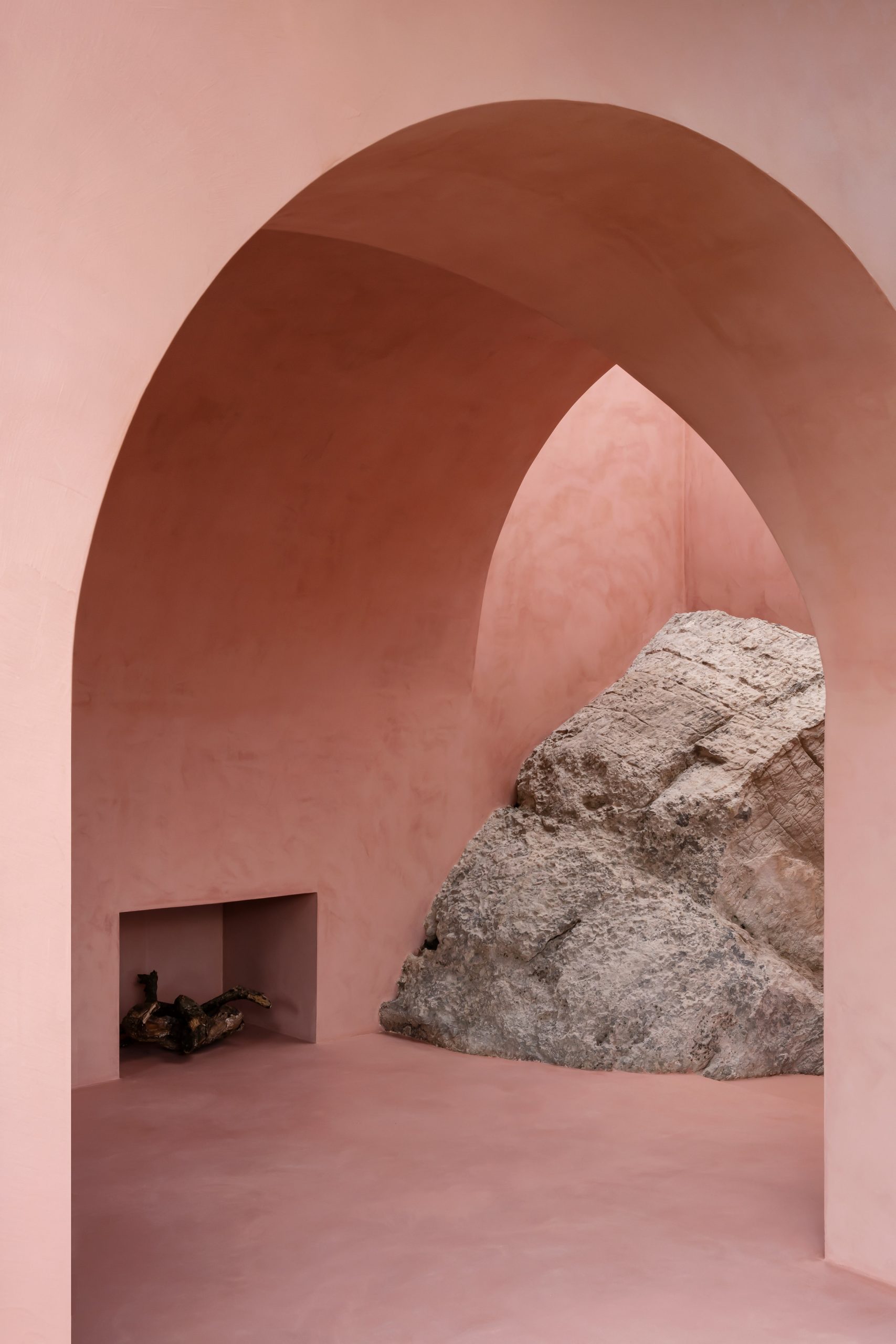 “Our first reaction was that only if we could come up with something that would add something in a respectful and beautiful way, would we ever consider building,” explained the studio, which is led by Mar Vicens and Ask Anker Aistrup.

“However, it was calming that the functions we were looking to build wouldn’t be much different than those of the existing structures found in the area.” 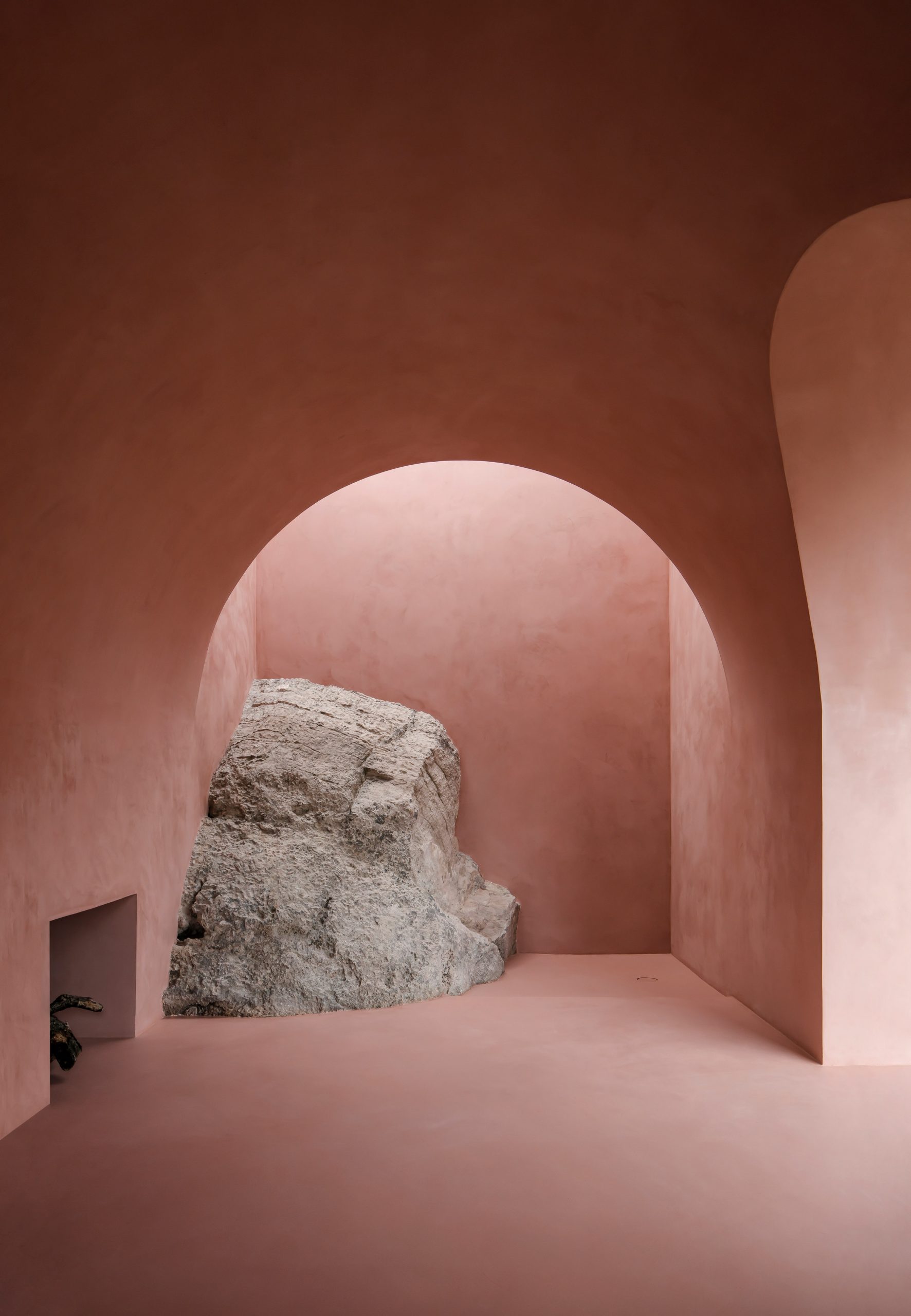 One of the houses is partially embedded into an existing stone terrace, which the studio hopes will help the structure keep cool during the warm summer months.

A sliding teakwood door can be pushed back to reveal a grand arched entrance. Inside, the house has a series of smooth, sloping surfaces similar to those seen within a cave.

The walls, floor and ceiling have been exclusively rendered in blush-pink stucco, as the studio felt the colour was complementary to the pale green shade seen on the underside of an olive tree leaf. 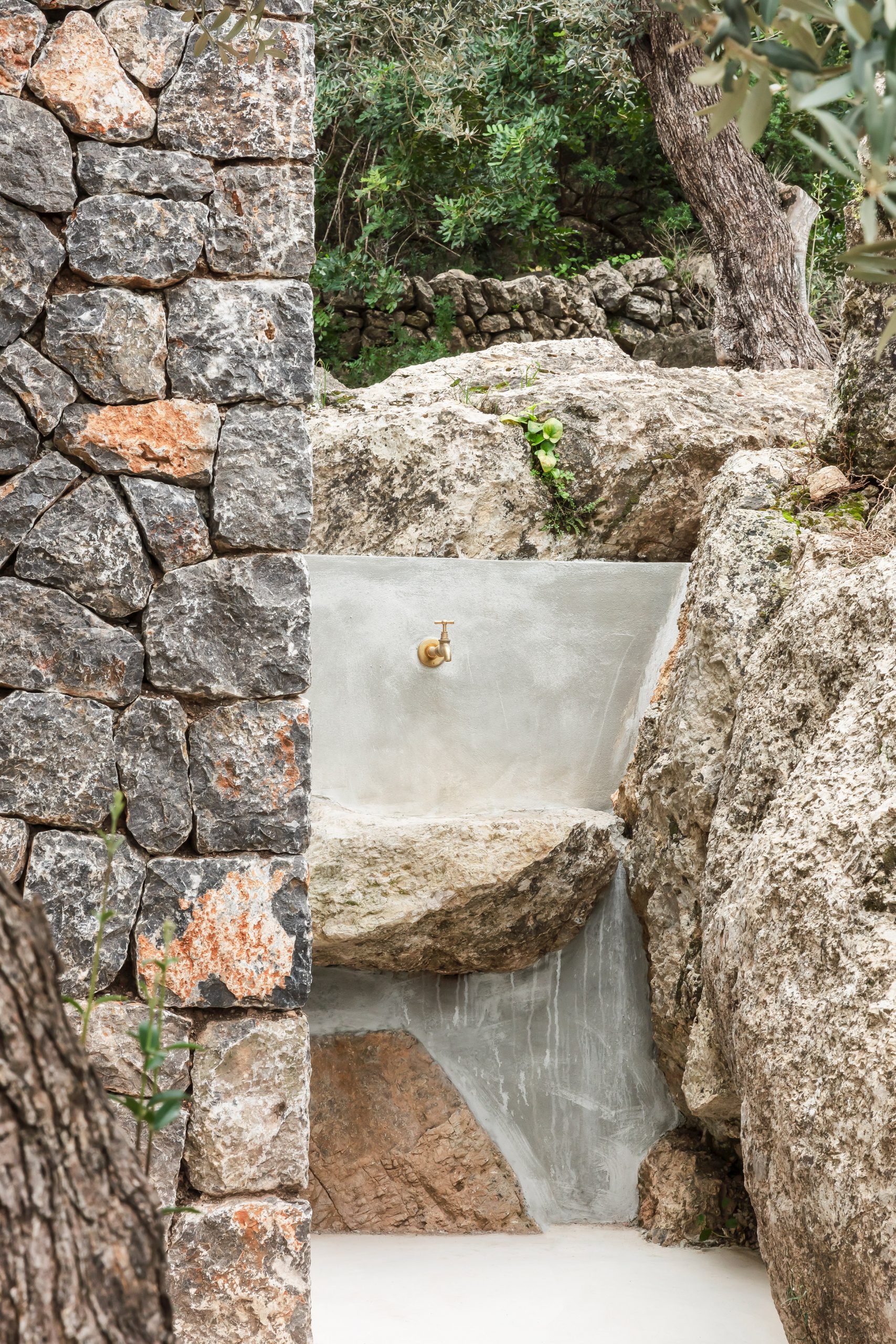 A corner of the house has been built around a craggy boulder that the studio left in situ, illuminated by a skylight directly above.

“To us, the stone became a piece of art – suddenly the house was more about sculpting its backdrop and being its lightbox,” explained the studio.

Just beside the boulder, an overhead shower has been fitted, while a single bed lies on the other side of the house. Outside there’s also a large sink, the basin of which is formed from rock. 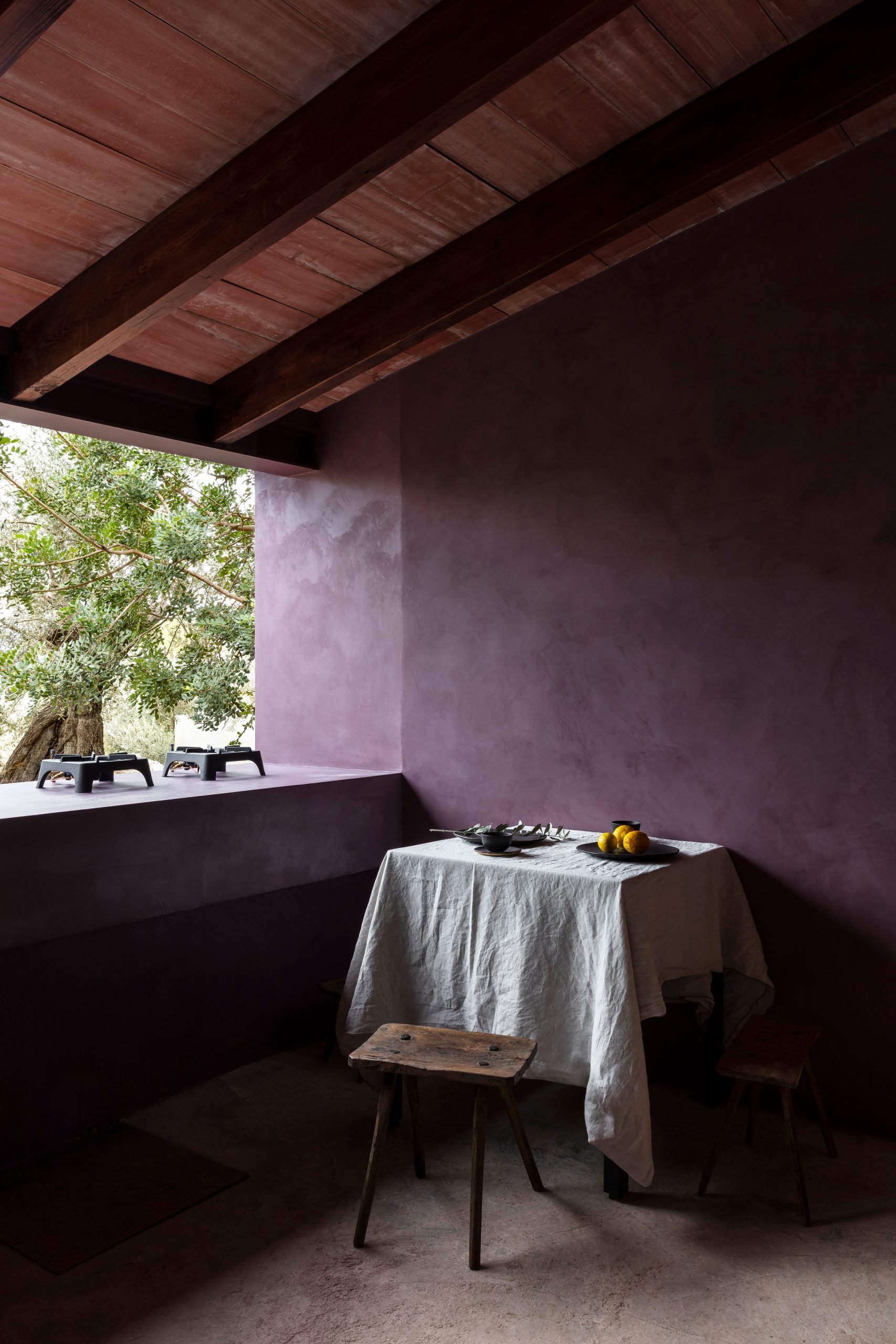 Mar Plus Ask created the second house by renovating a dilapidated shed on site that was once used to store tools.

Surfaces throughout are instead covered in deep-purple stucco, a hue that the studio thought was more akin to the dark, glossy topside of an olive leaf. 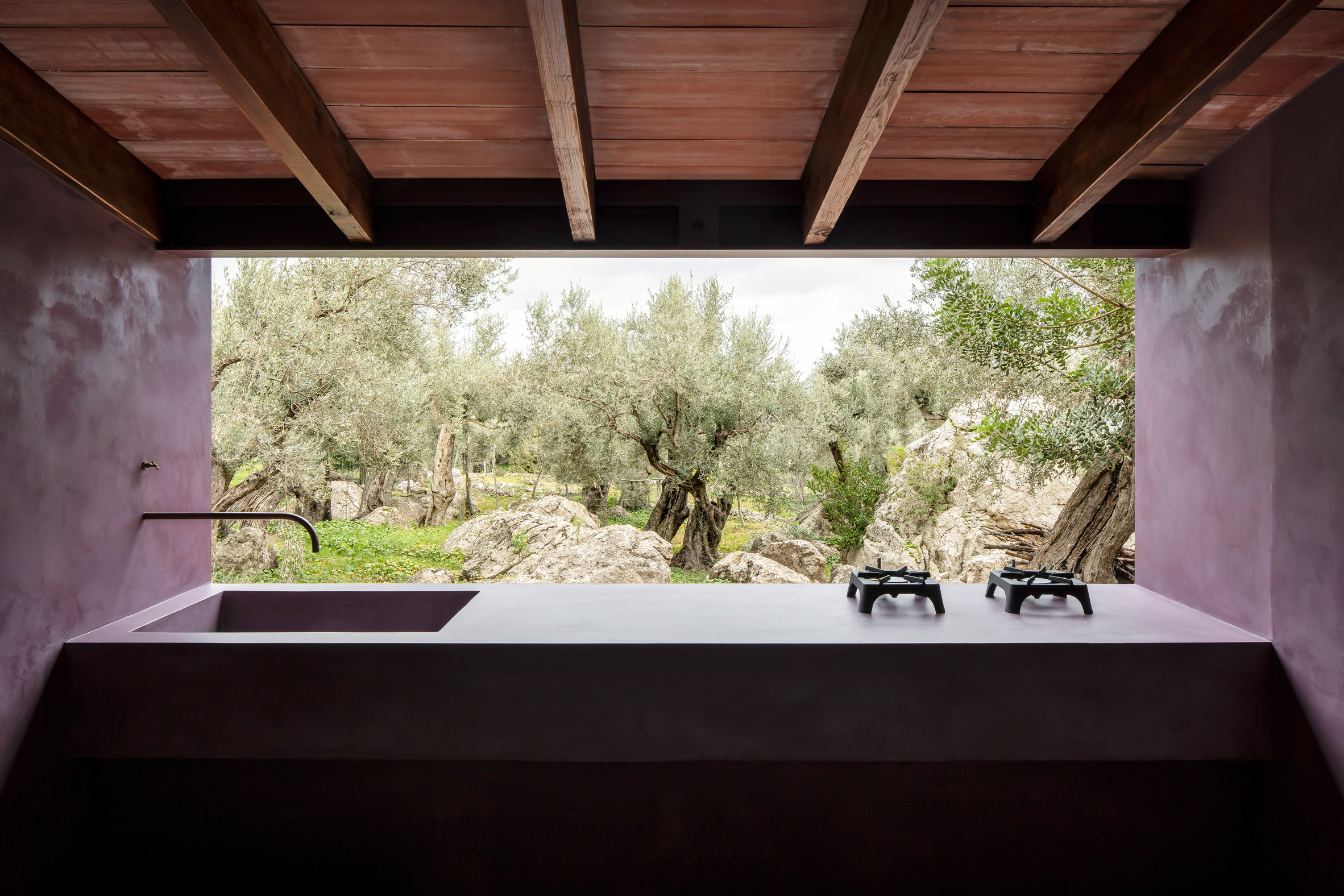 The structure was initially deemed too narrow to hold cooking facilities but the studio ended up carving a wide opening into one of its 60-centimetre-thick walls, which is able to accommodate a chunky prep counter and a sink.

As guests will be living off-grid, they will simply have access to two gas burners and a wood-fire oven – water, like that used to service the shower and sink in the first house, is sourced from a nearby spring. This house also includes a toilet. 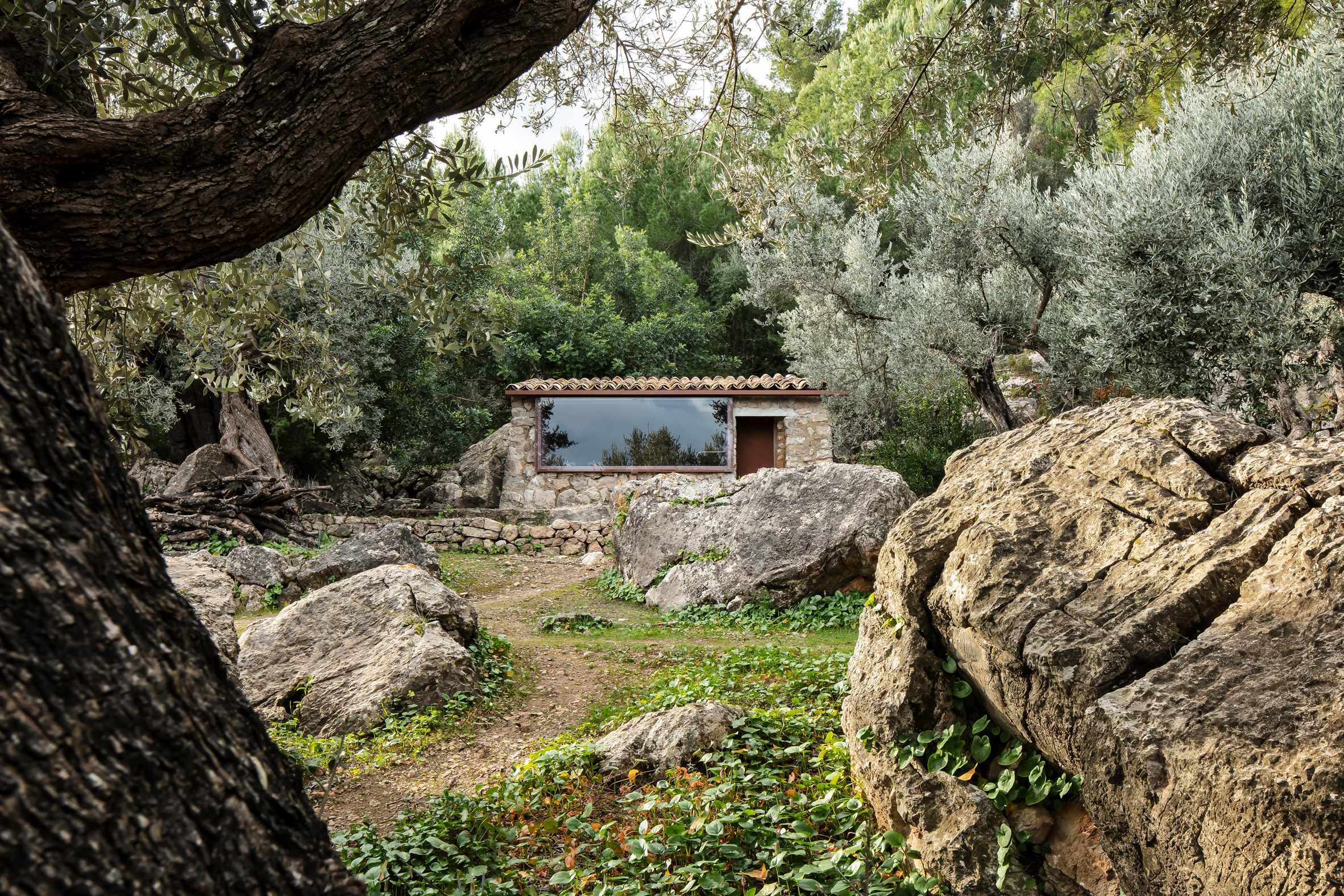 Mar Plus Ask was established in 2015 and works between offices in Copenhagen, Berlin, Mallorca and Valencia.

The studio’s Olive Houses project isn’t the only place where creatives can go to clear their heads. Back in 2016, Andrea Zittel launched Wagon Station Encampment – a campsite near Joshua Tree Park, California, where artists and writers are allowed to play out their “desert fantasy”.

Photography is by Piet Albert Goethals.

The post The Olive Houses are off-grid retreats hidden in Mallorca’s mountains appeared first on Dezeen.