No Footprint House is a prototype prefabricated home in Costa Rica 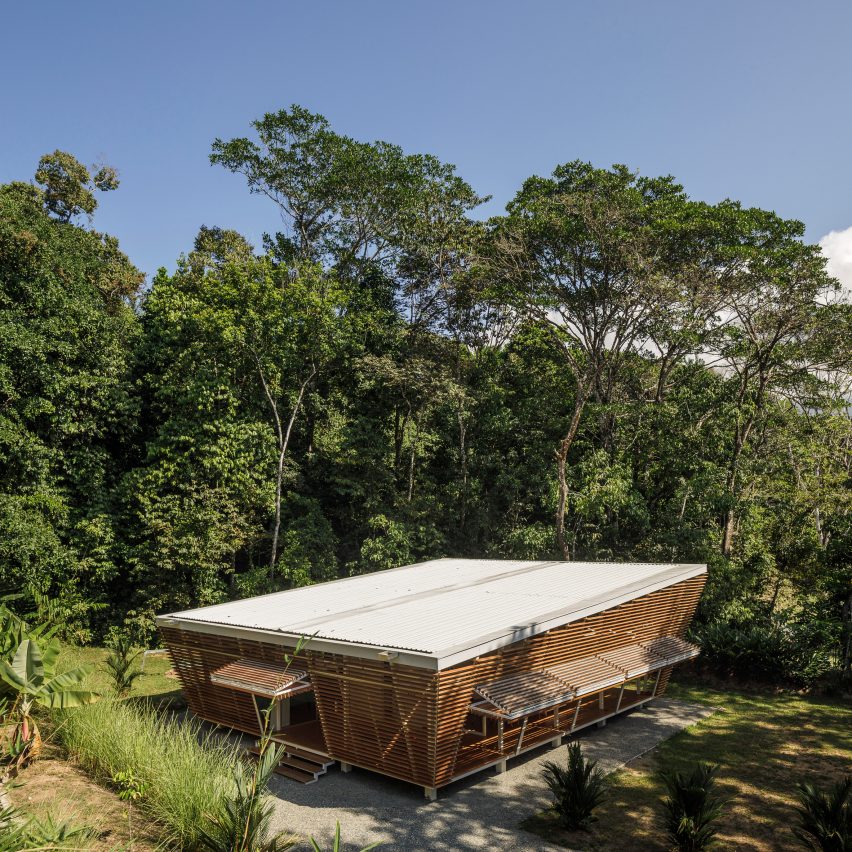 Slanted wooden louvres offer natural light and cross-ventilation in the prefabricated house in Costa Rica, which architecture studio A-01 created as a prototype for a series of future zero-carbon homes.

No Footprint House was prefabricated in the Central Valley of Costa Rica before being transported to its site in Ojochal, a small village located in the Puntarenas province. 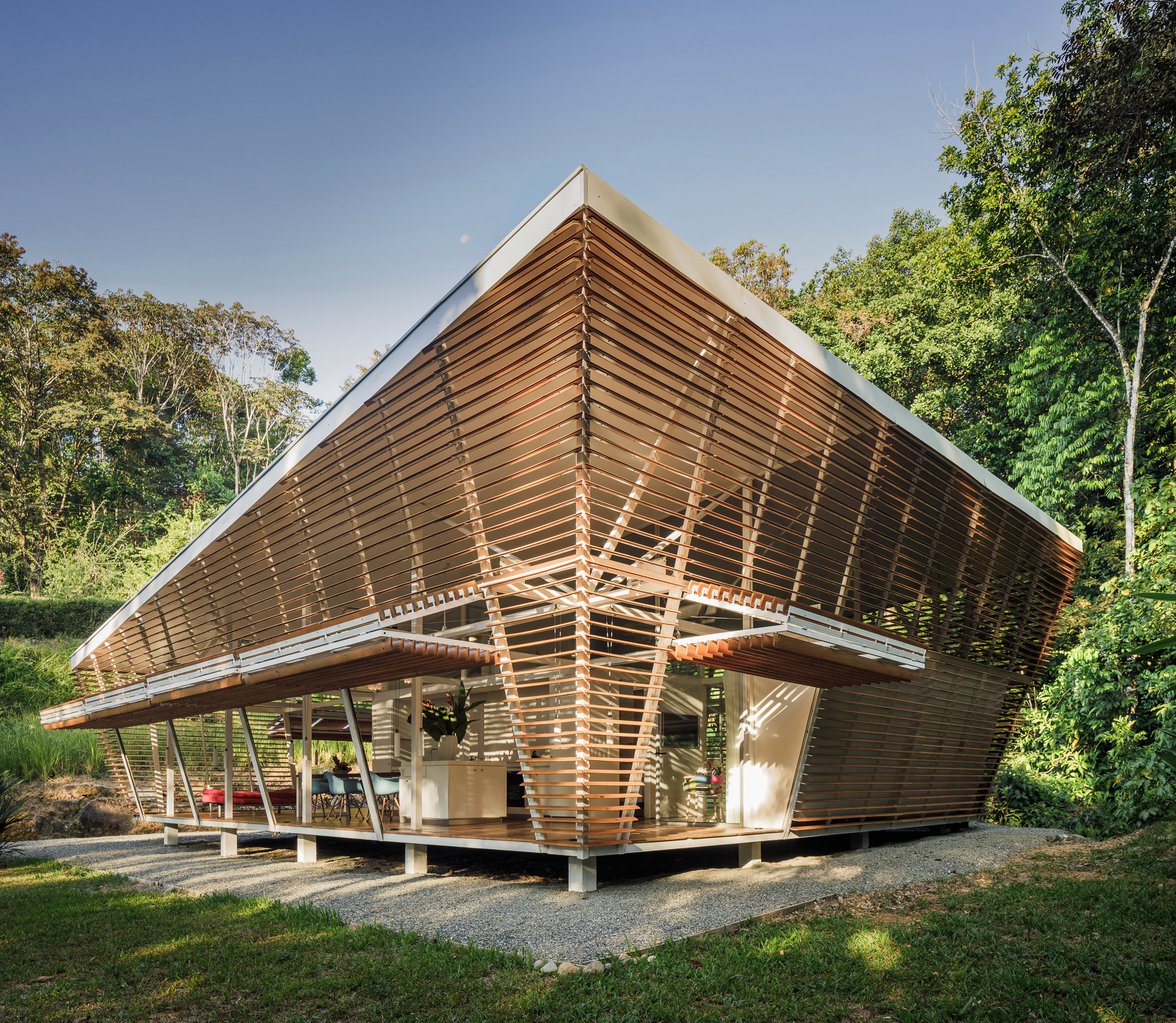 With the climate of its tropical setting and the aim to create as little carbon emissions as possible both in mind, the house is designed to have its climate passively controlled – meaning it does not rely heavily on artificial heating or cooling.

Slanted walls provide solar shading and are covered in slender slats that act like large blinds, opening or closing to allow cross ventilation. The outer screens are motorised so that they can fold up completely. 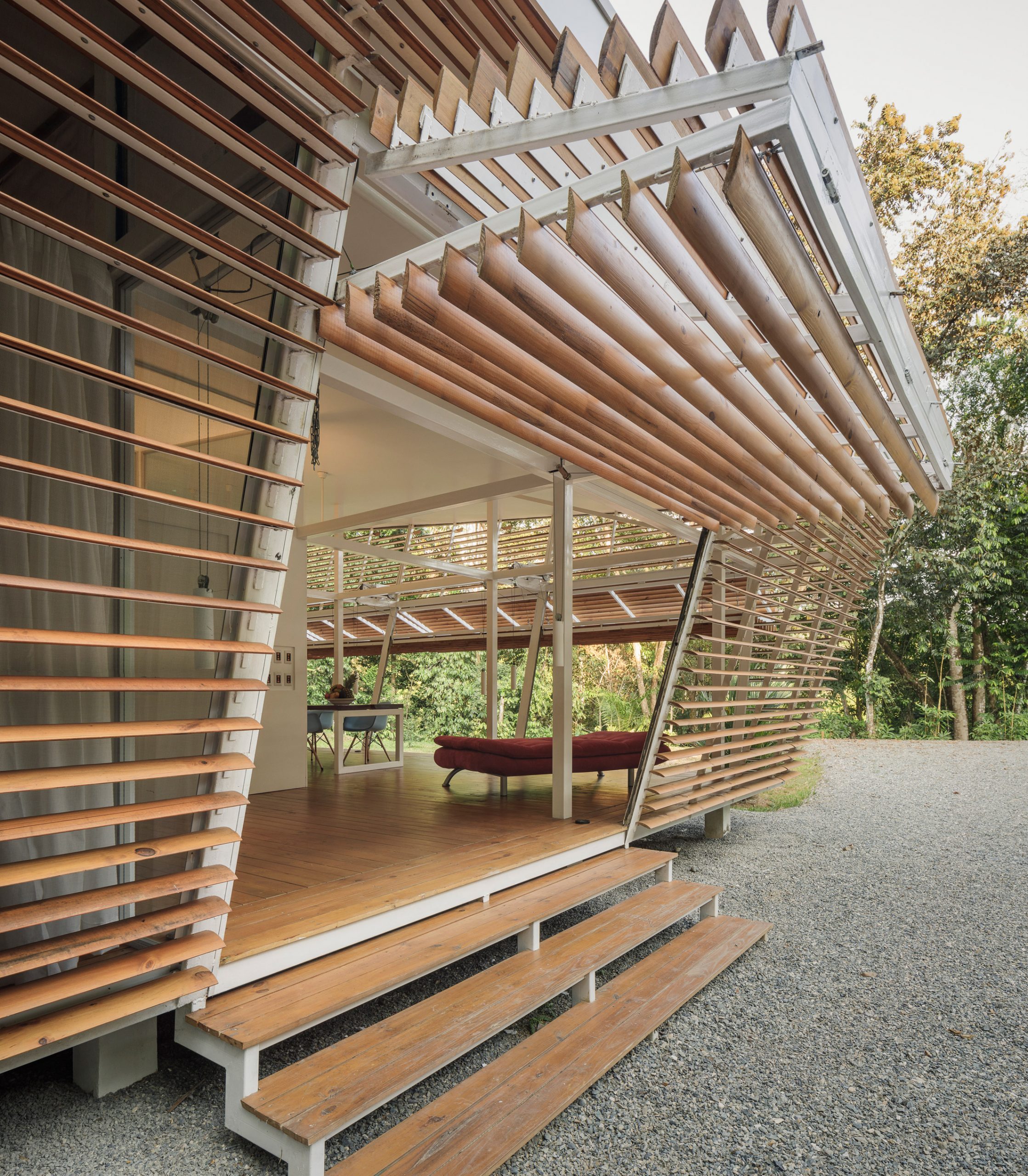 “The slanted skin decreases the direct impact of sunlight and precipitation, which protects the elevated floorplan from overheating and splashing water,” A-01 said.

“Facade panels can be opened or closed individually in order to regulate views and exposure, augment or reduce air flows, create privacy and security.”

No Footprint House is linked to the local existing network of electricity and water, which A-01 said is almost completely powered by renewable energy, while panels are used to heat the water on-site in order to save energy.

A-01 placed all the services, like machinery, bathrooms, kitchen and laundry area, in a volume in the centre of the floor plan to create a single link point. 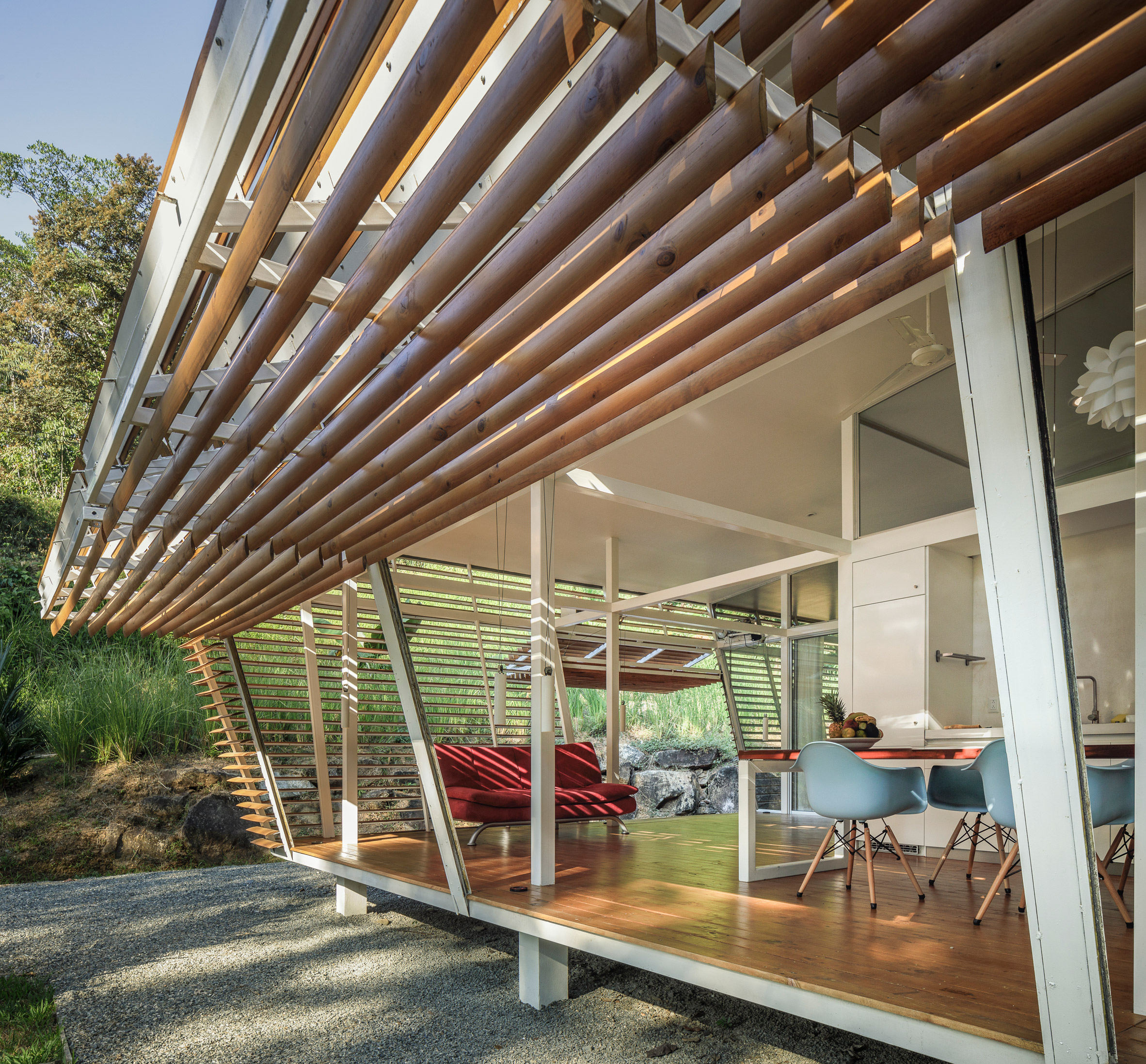 “This keeps the service lines short and contributes to our overall savings in terms of embedded energy and material usage,” it added.

The house was also transported to site on a single truck, saving construction workers from travelling from Central Valley to the building site regularly. 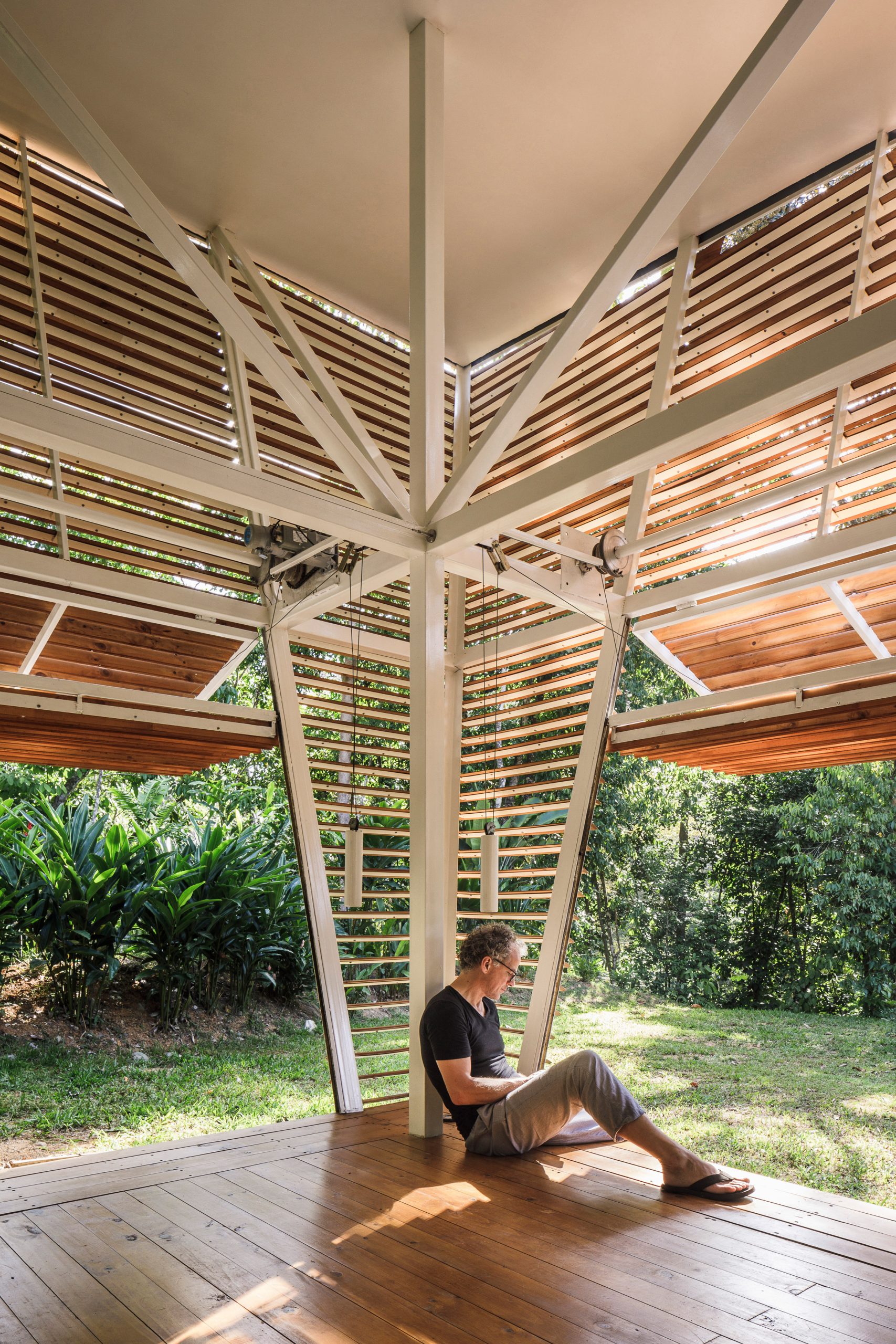 “Our prefabrication logistics in that central valley requires only a short time of the workers on-site and thus implies maximized efficiency with the material and worker transportation,” A-01 said.

The house’s prefab structure is composed of an elevated steel grid measuring 12 by nine metres raised on concrete foundations, and columns that form a second layer inside the inclined exterior walls. 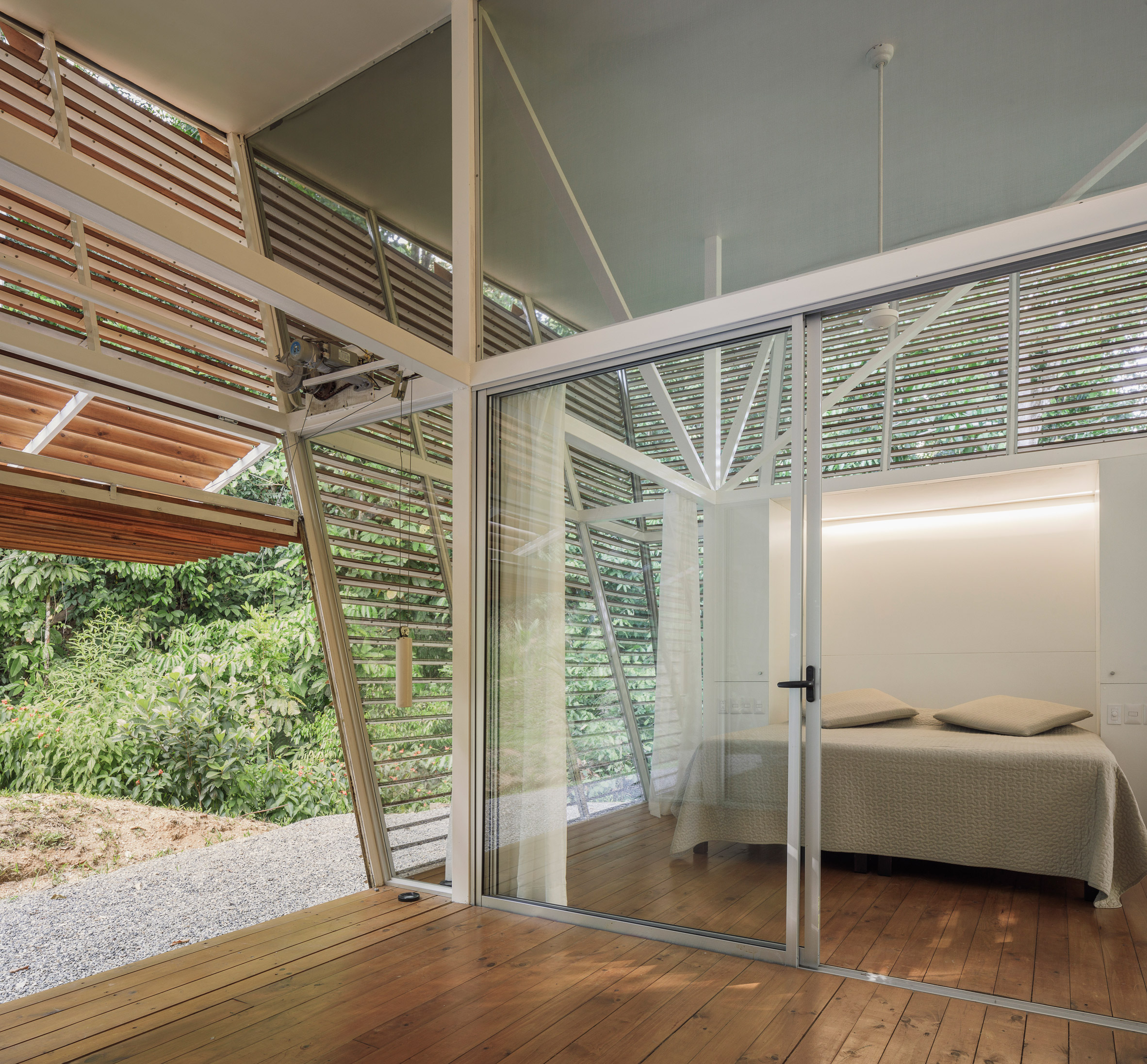 Inside, an open-plan living area including a living and dining area, two bathrooms, two bedrooms and a terrace is arranged around the central service core.

Additional features, like storage, and the bed frames are designed to slot in between structural columns. 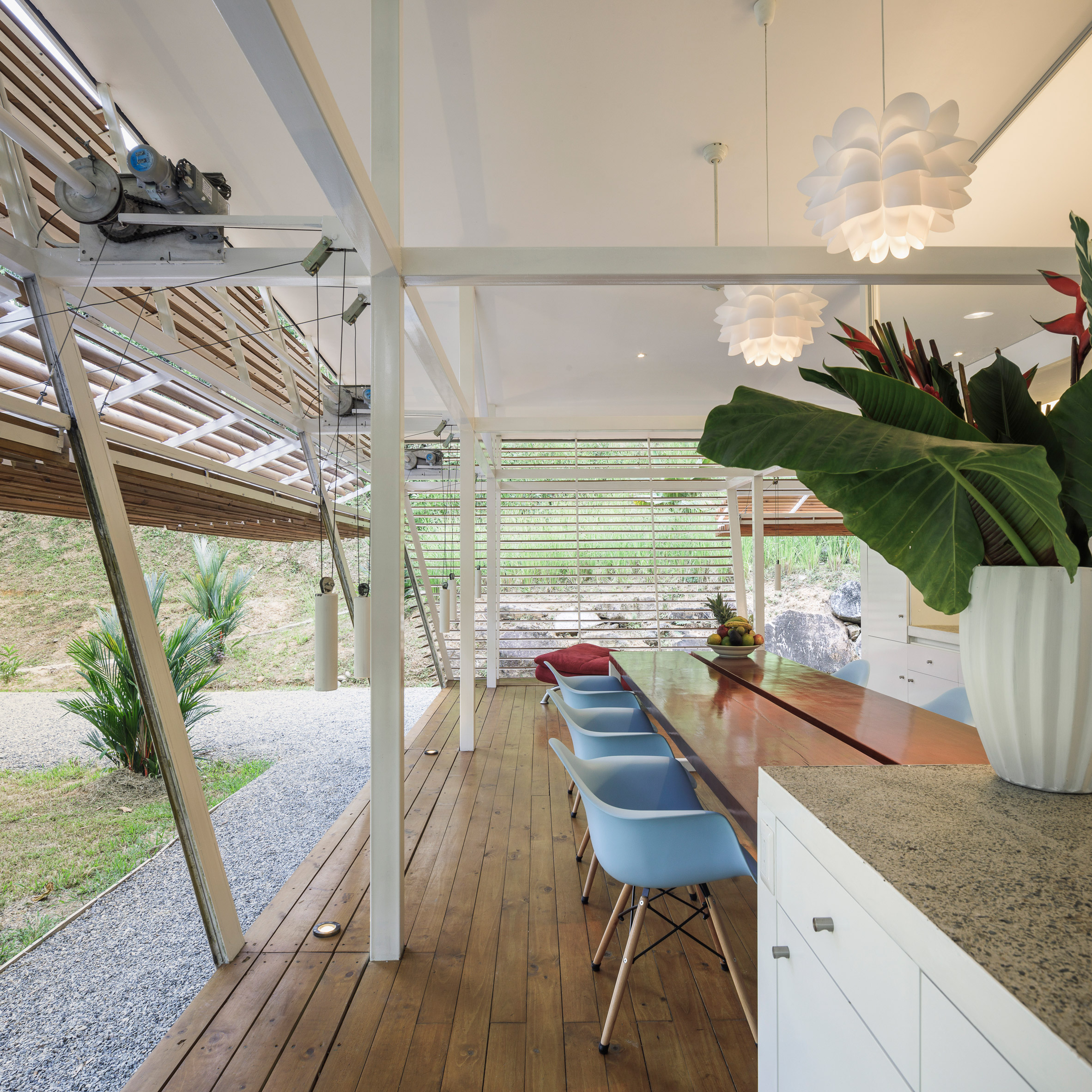 Also known as NFH-108, the house forms part of A-01’s mission to develop carbon-neutral construction in Costa Rica. It previously worked with Dutch architecture firm OMA to create a carbon-neutral roadmap in 2010, that was later modified and then ratified by the national government in 2018.

NFH-108 is the first iteration of No Footprint House, a project that it intends to create a prefab house with zero carbon footprint. According to the A-01, this version has 40 per cent less carbon emissions than a typical Costa Rican house of the same size. 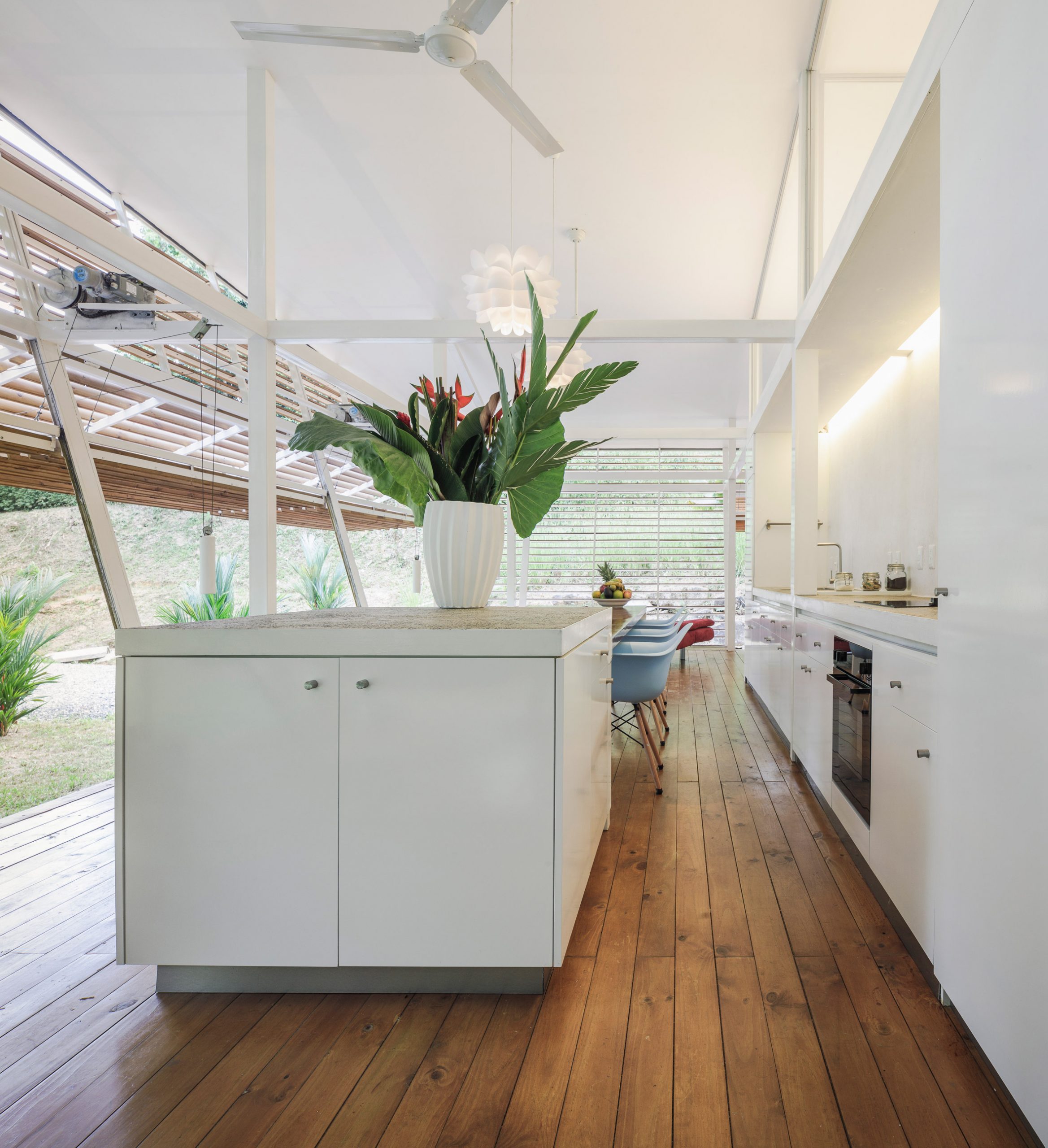 The second iteration is already underway and A-01 said it will achieve a 60 per cent reduction, with changes such as swapping the steel for a locally sourced laminated teak wood that the studio’s engineers developed with a Swiss-Costa Rican company.

According to A-01, additional reductions will be made through changes to the prefabrication chain and certain material selections that will save another 20 per cent of emissions.

This is in line with the Life Cycle Assessment (LCA), which assesses the environmental impacts of a project throughout its life cycle, that it A-01 presented at the international climate conferences by the United Nations (the Pre-COP25 in Costa Rica and the COP25 in Madrid) last year. 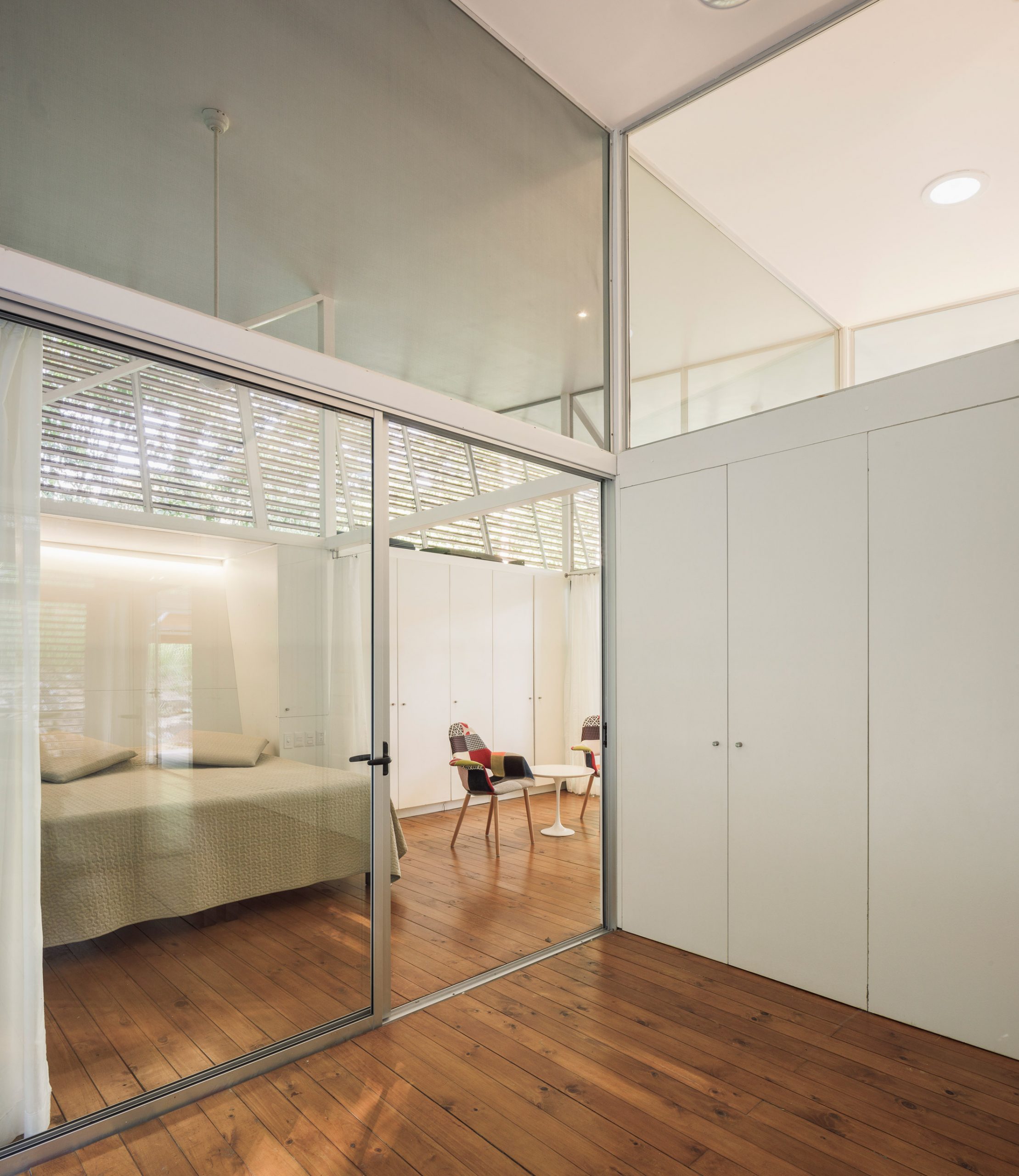 In the final No Footprint House, the remaining 20 per cent of emissions will be offset by the production of local energy.

Other versions can also be customised in since based on the established grid size and materials from a catalogue – a feature A-01 said is the first of its kind in Central America. 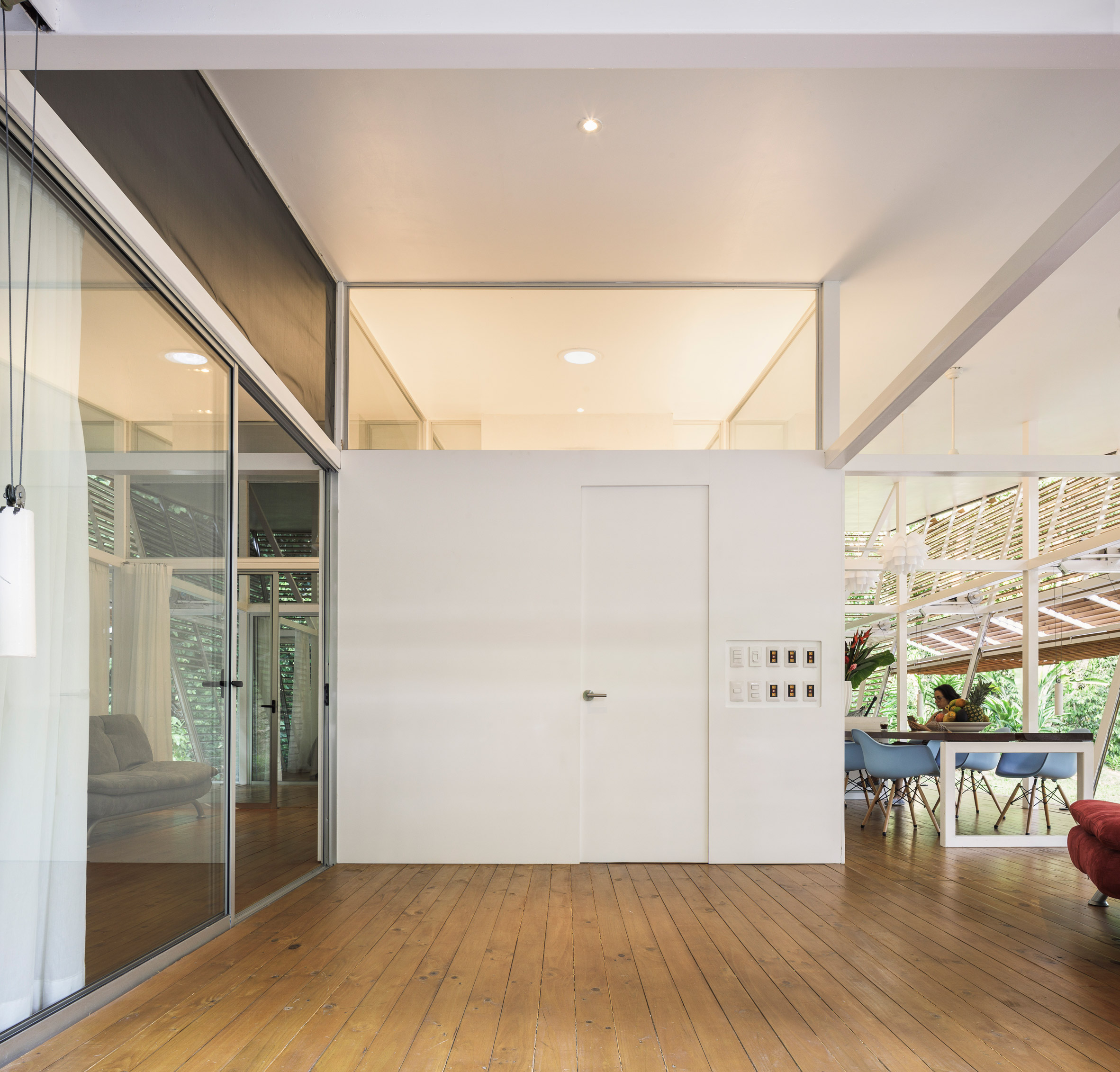 No Footprint House is longlisted in the rural house category of Dezeen Awards 2020.

The project is among a number aiming to reduce the carbon footprint of houses, as architects address the climate crisis and environmental impact of the building industry.

Examples include Parc Hadau, a net-zero-carbon housing scheme that Loyn & Co has proposed for Wales, and a carbon positive home in Australia’s Victoria designed by Clare Cousins Architects.

Photography is by Fernando Alda.

The post No Footprint House is a prototype prefabricated home in Costa Rica appeared first on Dezeen.