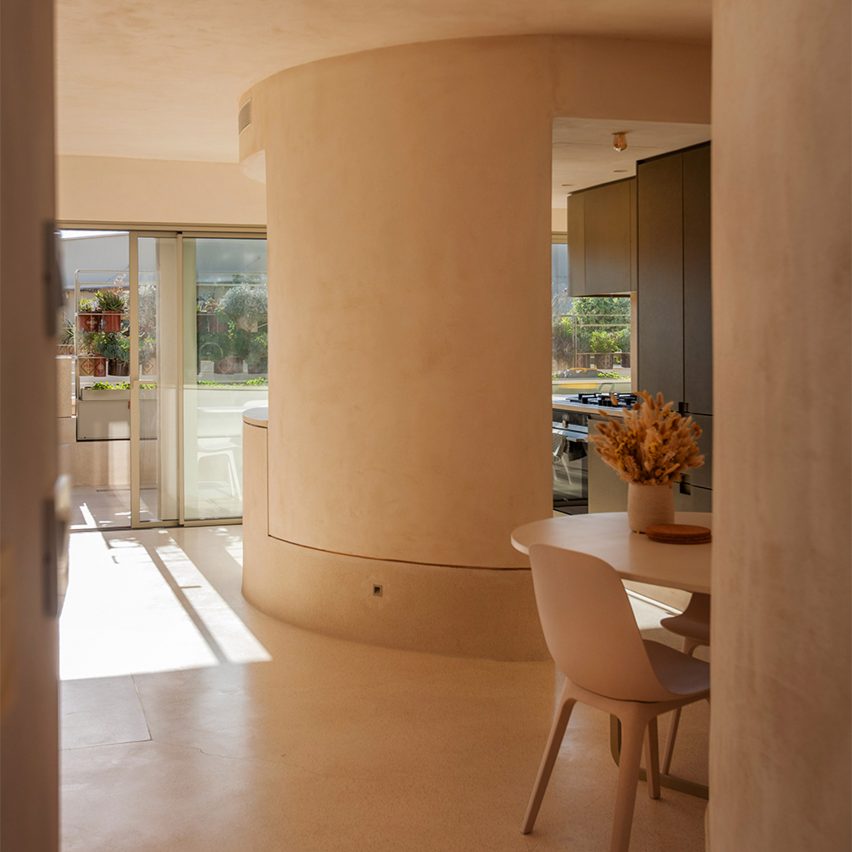 The studio overhauled the 270-square-metre apartment for a couple. It includes a combination of curved and linear elements to fuse traditional craftsmanship with more contemporary details. 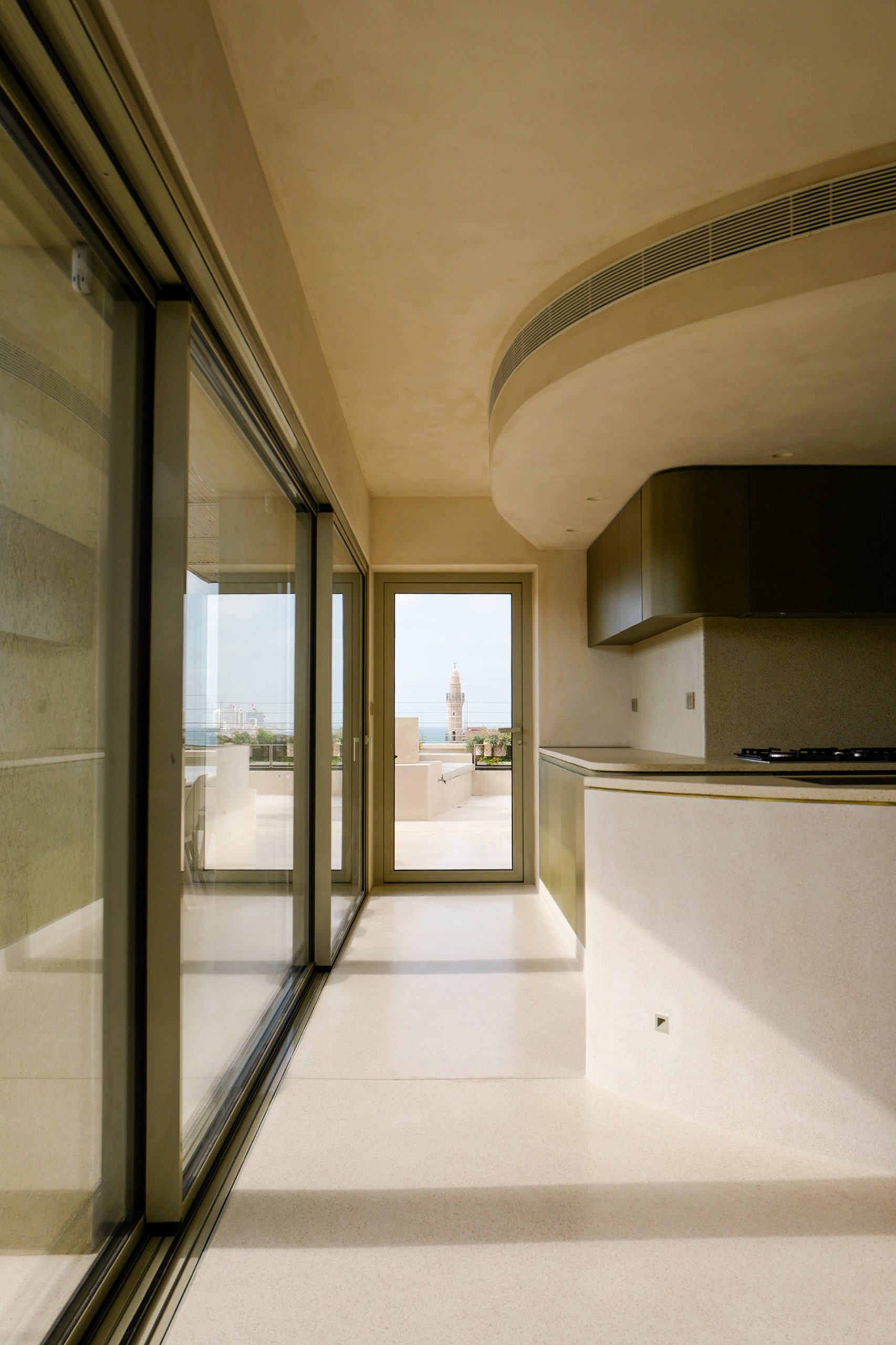 Called Jaffa Roofhouse, the project is a rooftop apartment that is in the shape of a cross with outdoor patios framing three sides of the unit. The unit has expansive views of the Mediterranea Sea, as well as Jaffa’s iconic Al Bahr Mosque minaret. 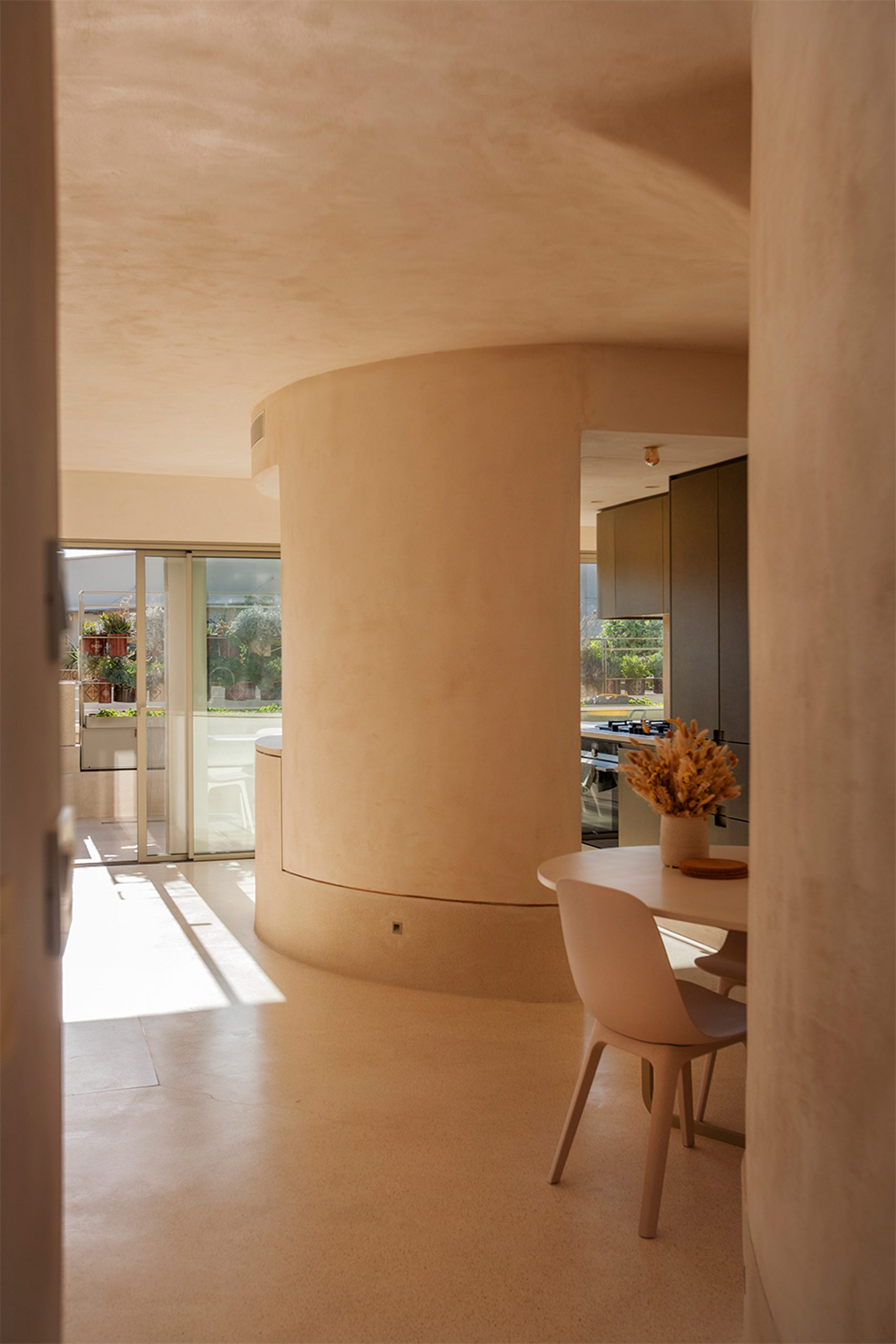 “The Jaffa Roofhouse is situated at the ancient port of the city of Jaffa, reputed to be one of the oldest ports in the world, out of which modern-day Tel Aviv has grown,” said Ben Gitai, who founded the studio in 2014.

“This Roofhouse is designed to feel suspended in the air of Jaffa-Tel Aviv and grounded by its materiality.” 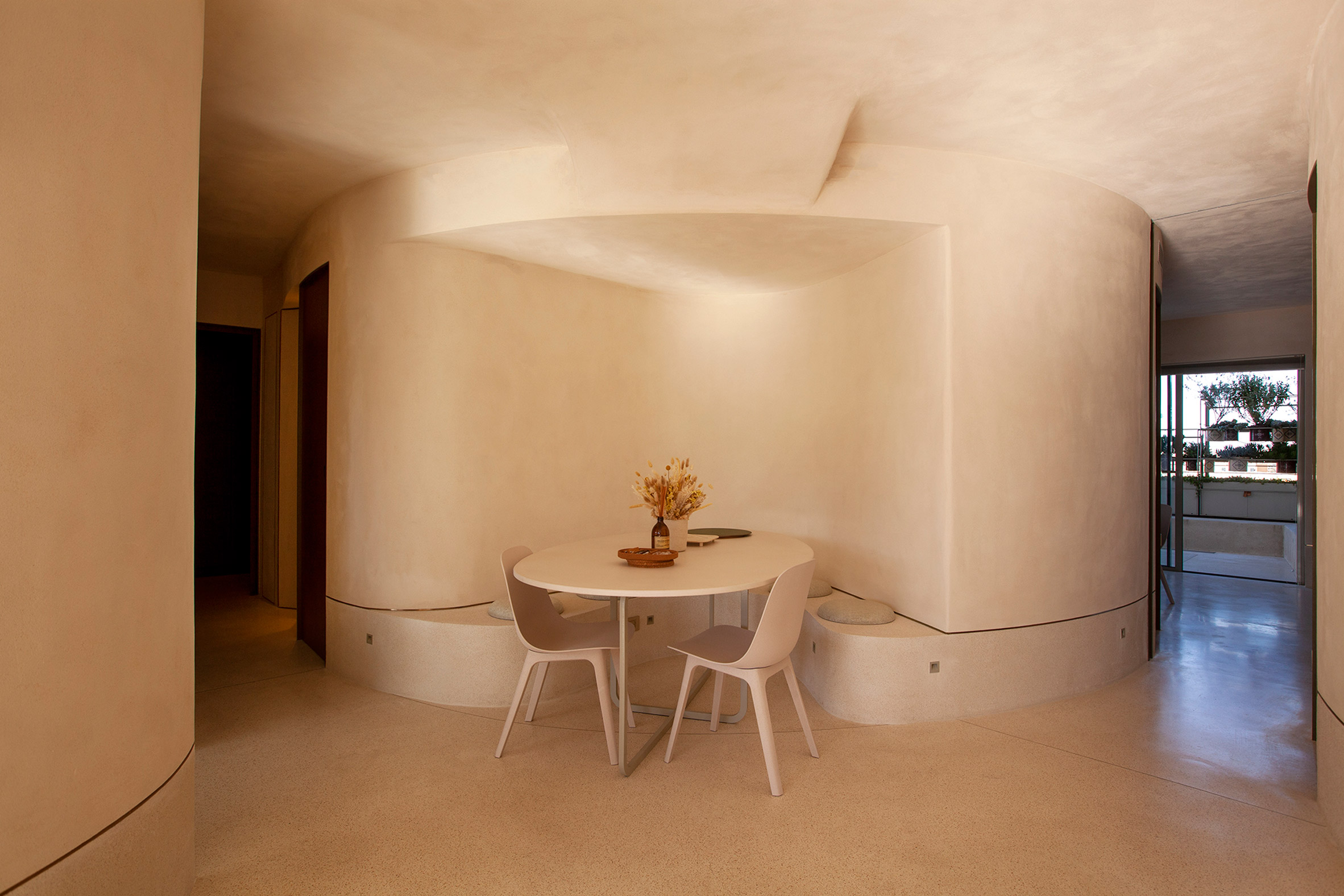 Gitai Architects sought to renovate the apartment with curved walls to soften its existing boxy shell. Covered in plaster, the walls change in hue from golden to lavender shades as the sun rises and sets across the city.

The curved walls feature in the living room. One conceals a galley-style kitchen with dark cabinets, the second accommodates a built-in dining nook and the third houses a bedroom. 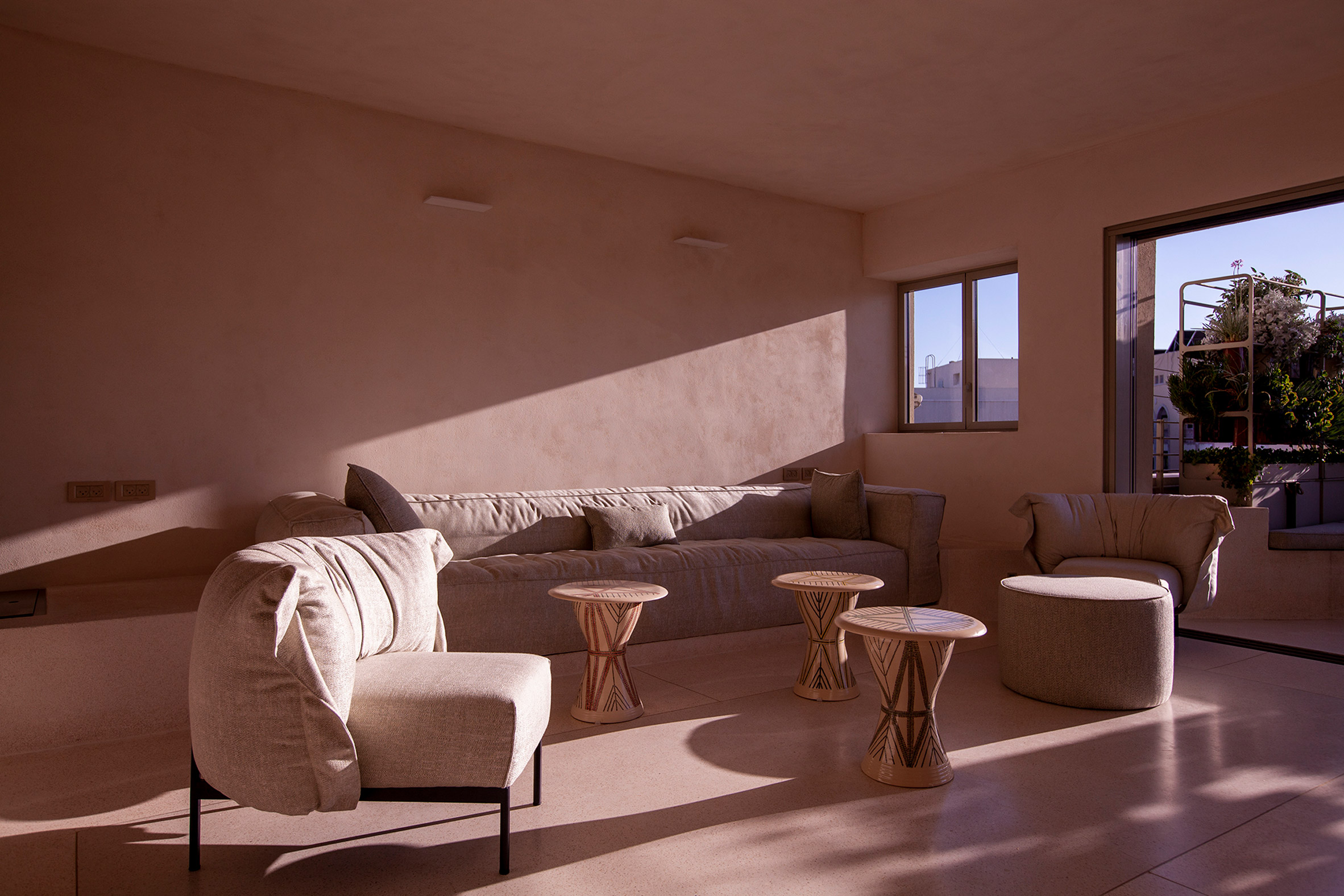 These curved structures, which are made of compressed soil and straw and covered with lime plaster from Israeli company ArcoLime, were constructed at an offset from the concrete existing shell.

A gap between the apartment’s original concrete walls and the natural covering applied over them allows for air to flow inside and promote a natural circulation to help regulate humidity and temperature. 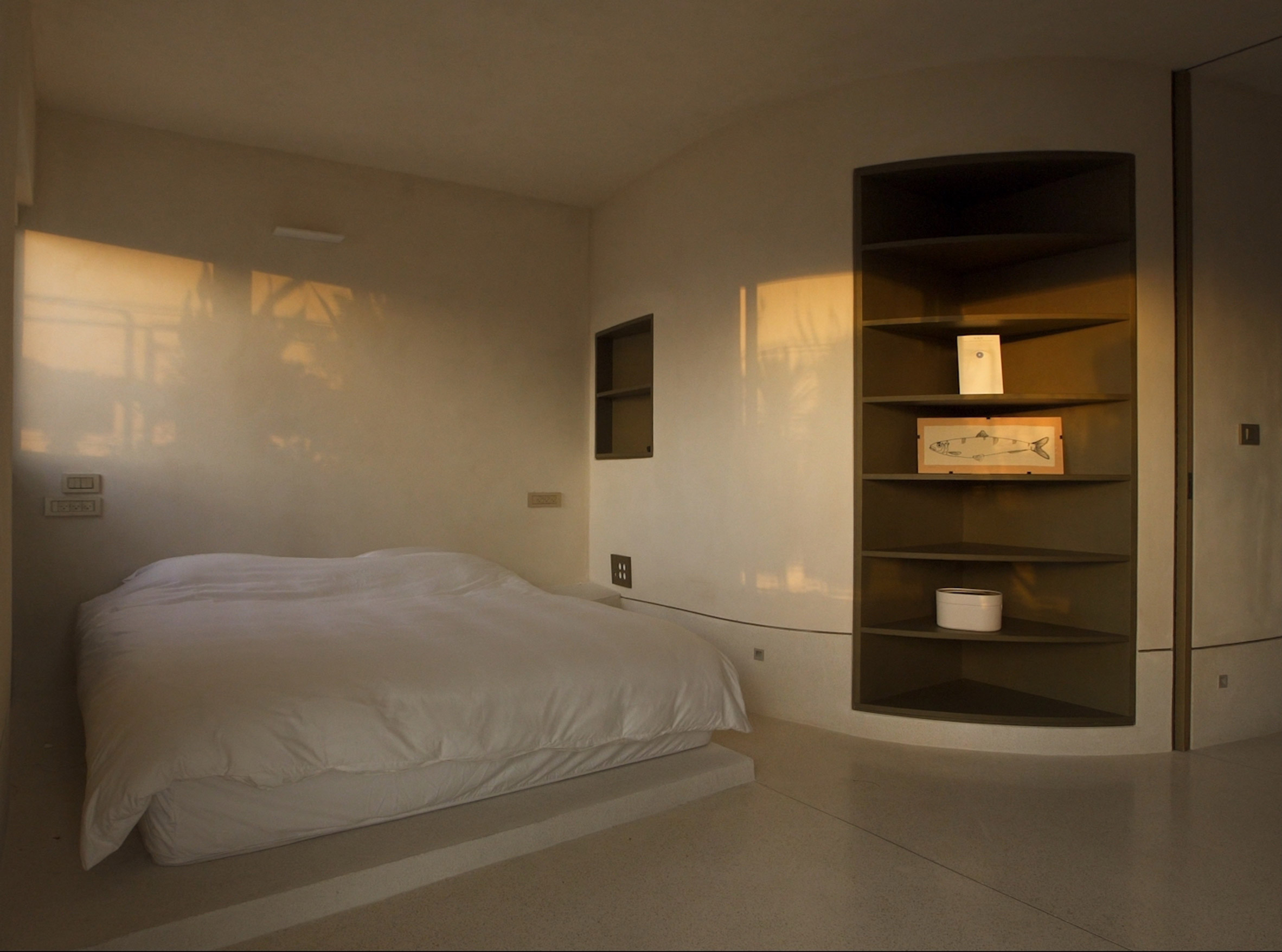 “Materiality was of premier importance in the spatial atmosphere and expression of this project, with most of its elements being earth-made from soil sourced from the local area,” the studio said.

“Throughout the design development of the project, a profound dialogue was in-stored between the Roofhouse and the surrounding landscape.” 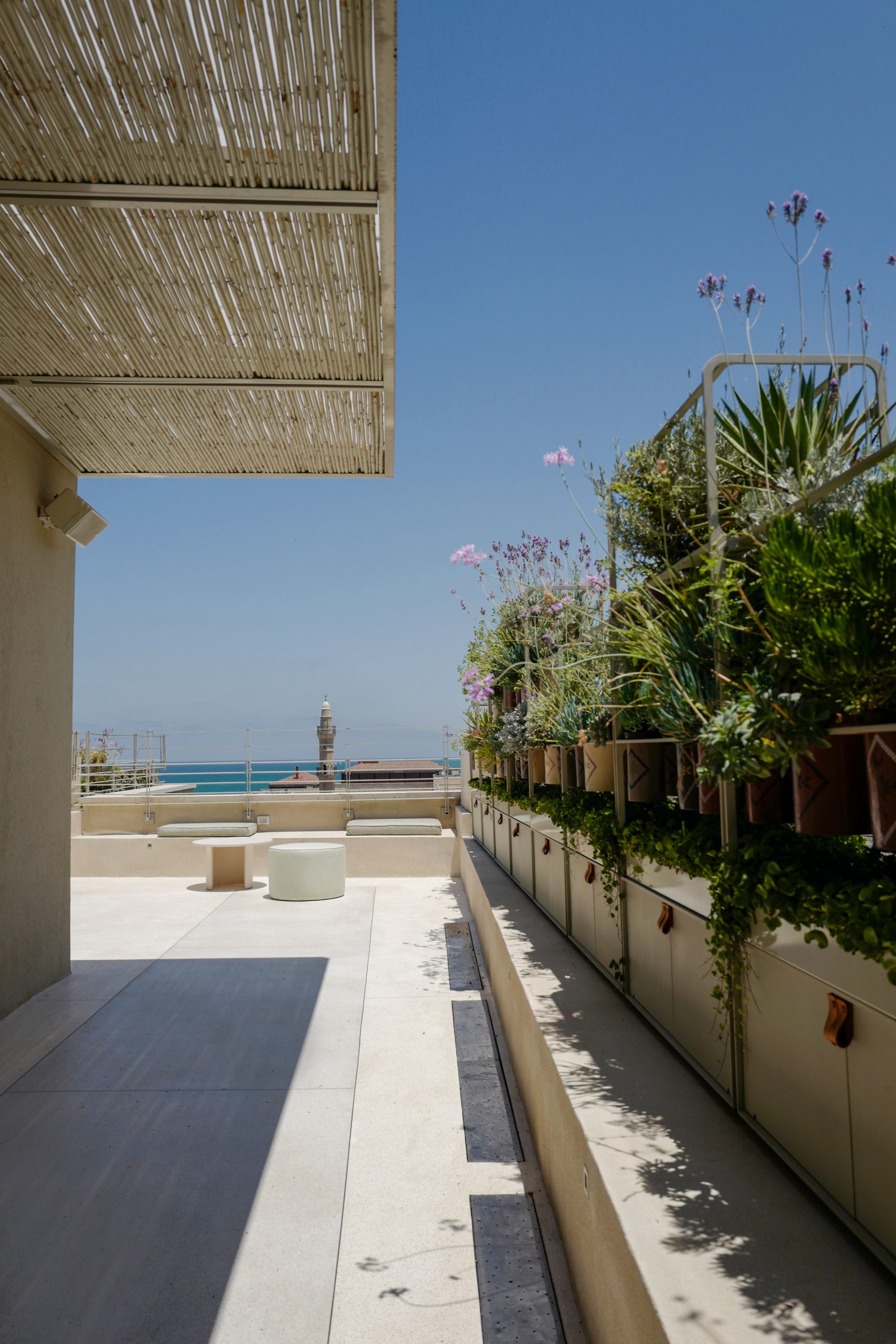 The master suite has more curved walls forming rounded nooks for a walk-in closet and shelving.

Curved elements extend outside the apartment as well for a rounded built-in seating nook on the terrace with cushions and a U-shaped seating arrangement. An outdoor dining area has an oval-shaped table to seat 20 people and is covered by a pergola for shade. Completing the roof terrace is a wall-like garden that was custom made for the project with 450 different ceramic pots created by hand. 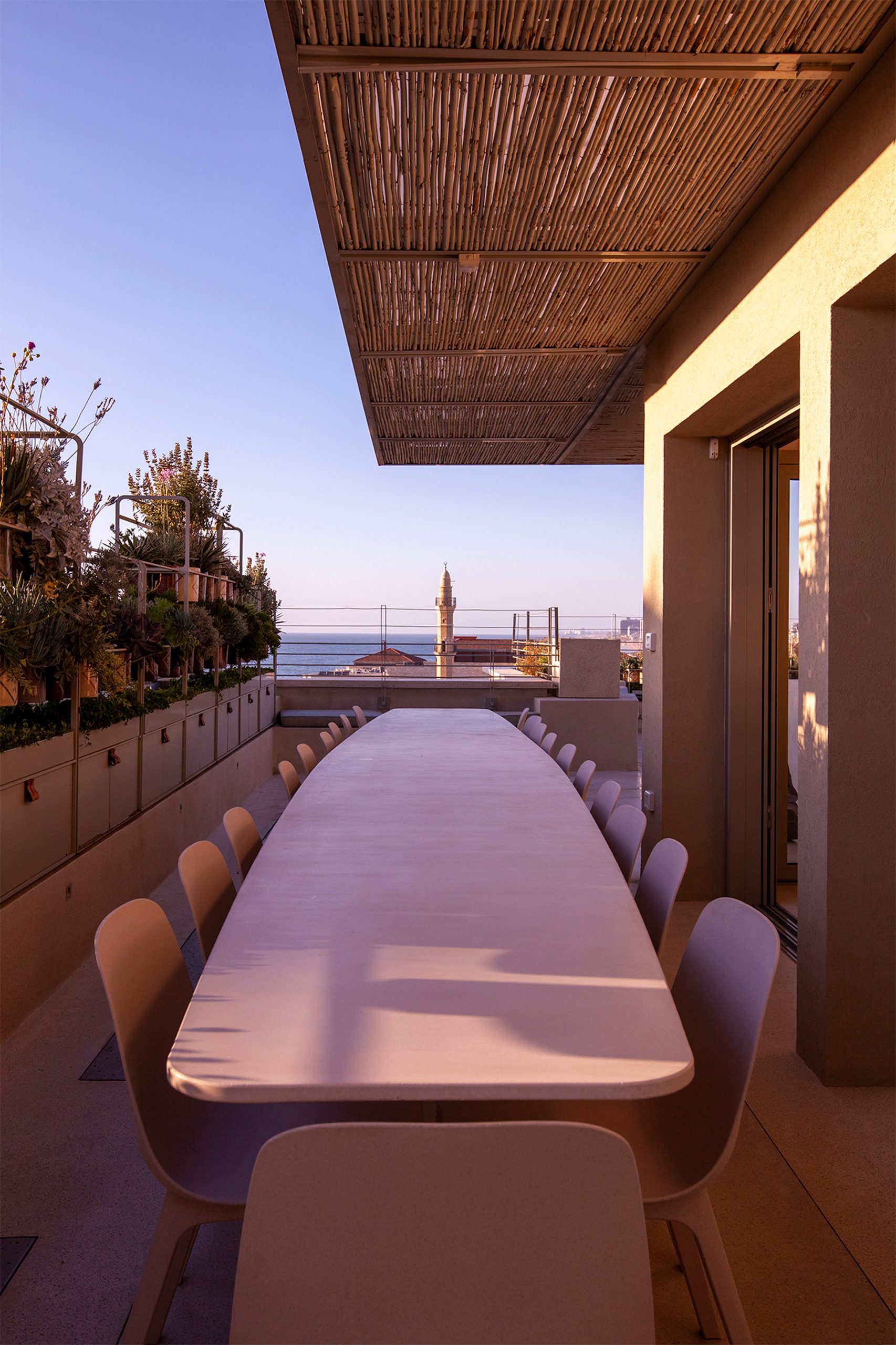 In addition to this project, Gitai Architects has also built a rammed-earth observatory in Israel’s Negev desert. The studio has offices in Haifa, Israel and Paris, France.

Israel’s historic centre of Jaffa is about a 10-minute drive south of the heart of Tel Aviv. Another apartment in Jaffa to similarly feature a mixture of old-world and contemporary styles is a penthouse by Pitsou Kedem and Baranowitz & Goldberg.

Photography is by Dan Bronfeld.