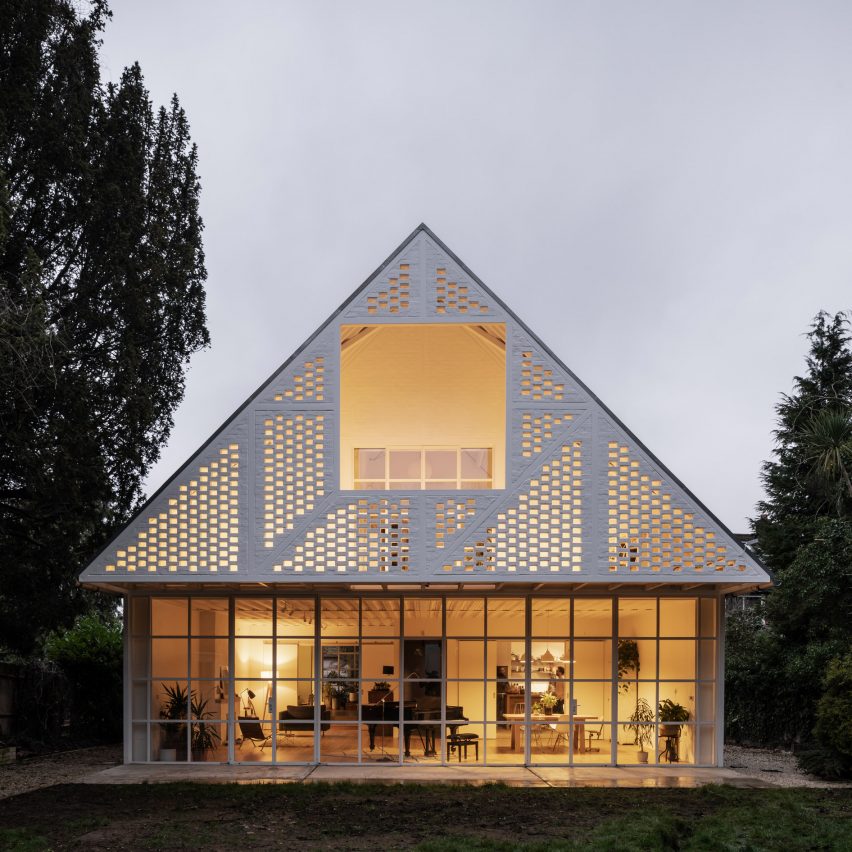 Surman Weston has built a house in Surbiton, south-west London, with a facade that riffs off the mock-Tudor facades of the surrounding suburban homes.

Named Ditton Hill House, the home was designed to combine the client’s desire for a contemporary house that had an industrial aesthetic with an acknowledgement of its location in a London suburb.

“The client wanted an overtly industrial house, the driving design concept for us was to deliver a house that met that brief but was still contextual in its suburban setting,” explained Surman Weston co-founder Tom Surman.

“The surrounding area was awash with mock-Tudor houses, we set about subverting this typical suburban language by pairing it with modern industrial materials,” he told Dezeen. 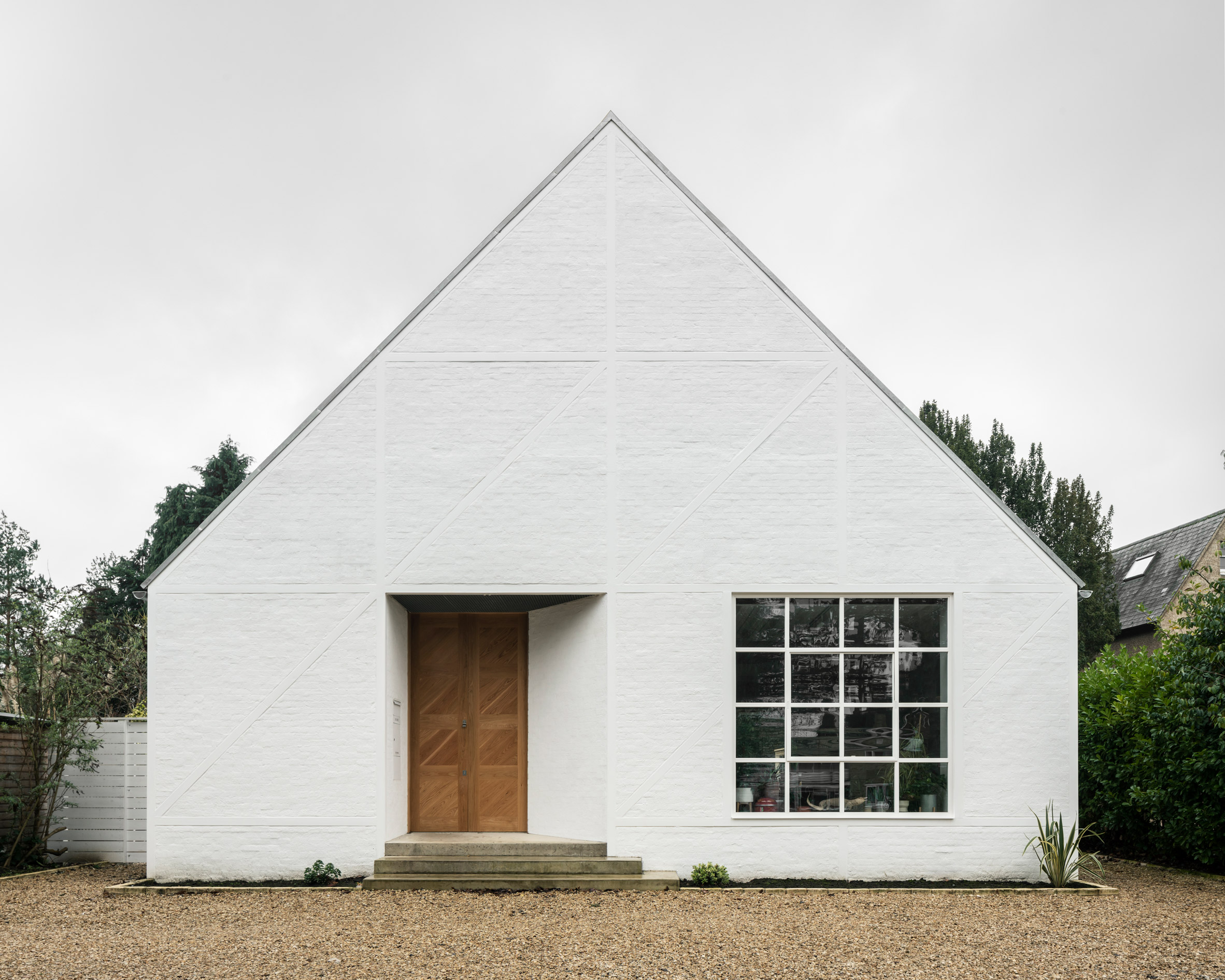 Built with an external steel frame, the most visible nod towards the neighbouring mock-Tudor homes are the front and rear facades of the A-frame house.

On these elevations, Surman Weston infilled the structural framing, which is arranged in a similar pattern to that found on mock-Tudor facades, with brick panels. 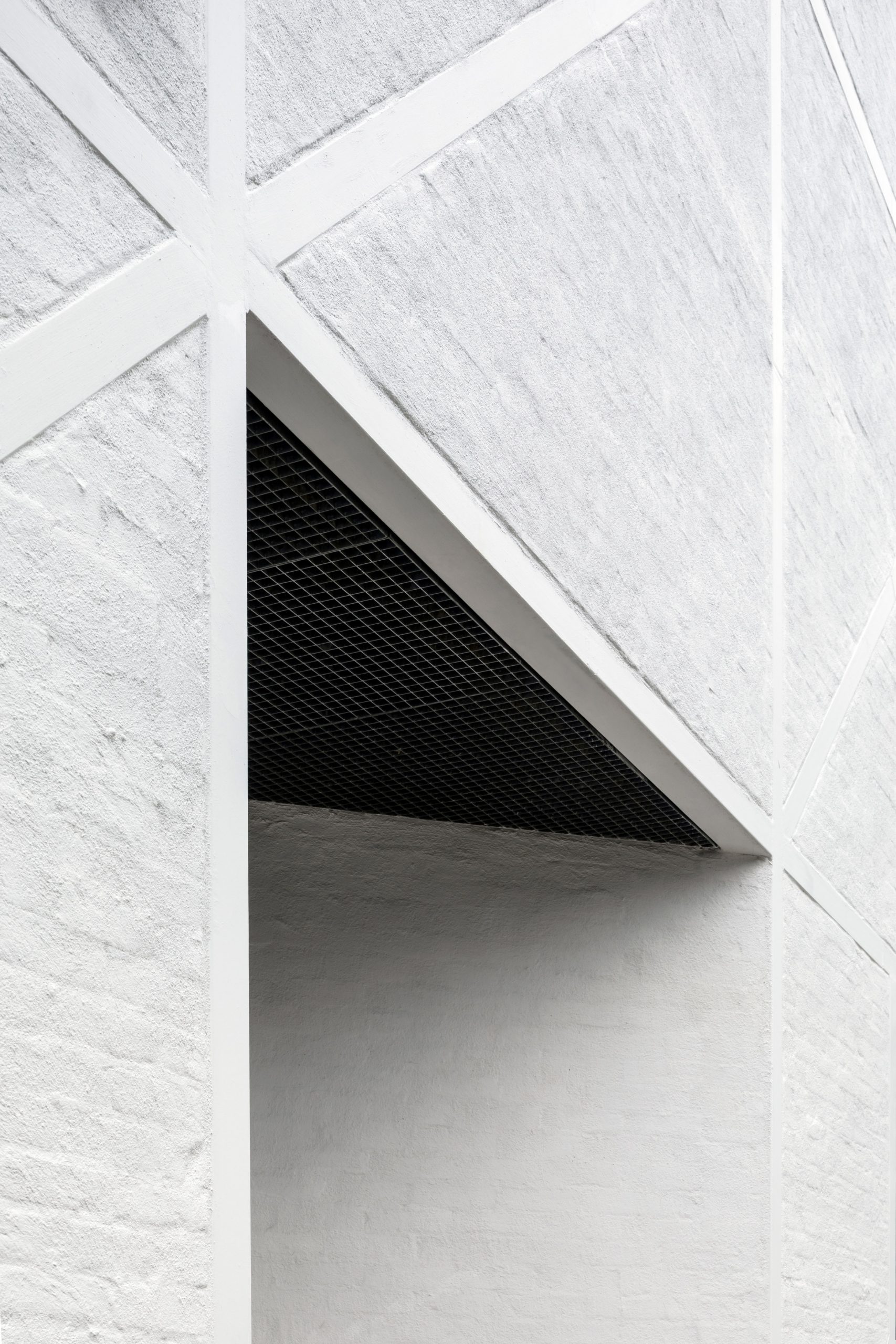 “The primary integration of the local vernacular results from the decision to use a steel exoskeleton infilled with masonry,” said Surman.

“The exoskeletal steel frame acts structurally, externally this enabled us to integrate the local vernacular in a contemporary fashion and internally allowed us to achieve expansive column-free spaces,” he continued. 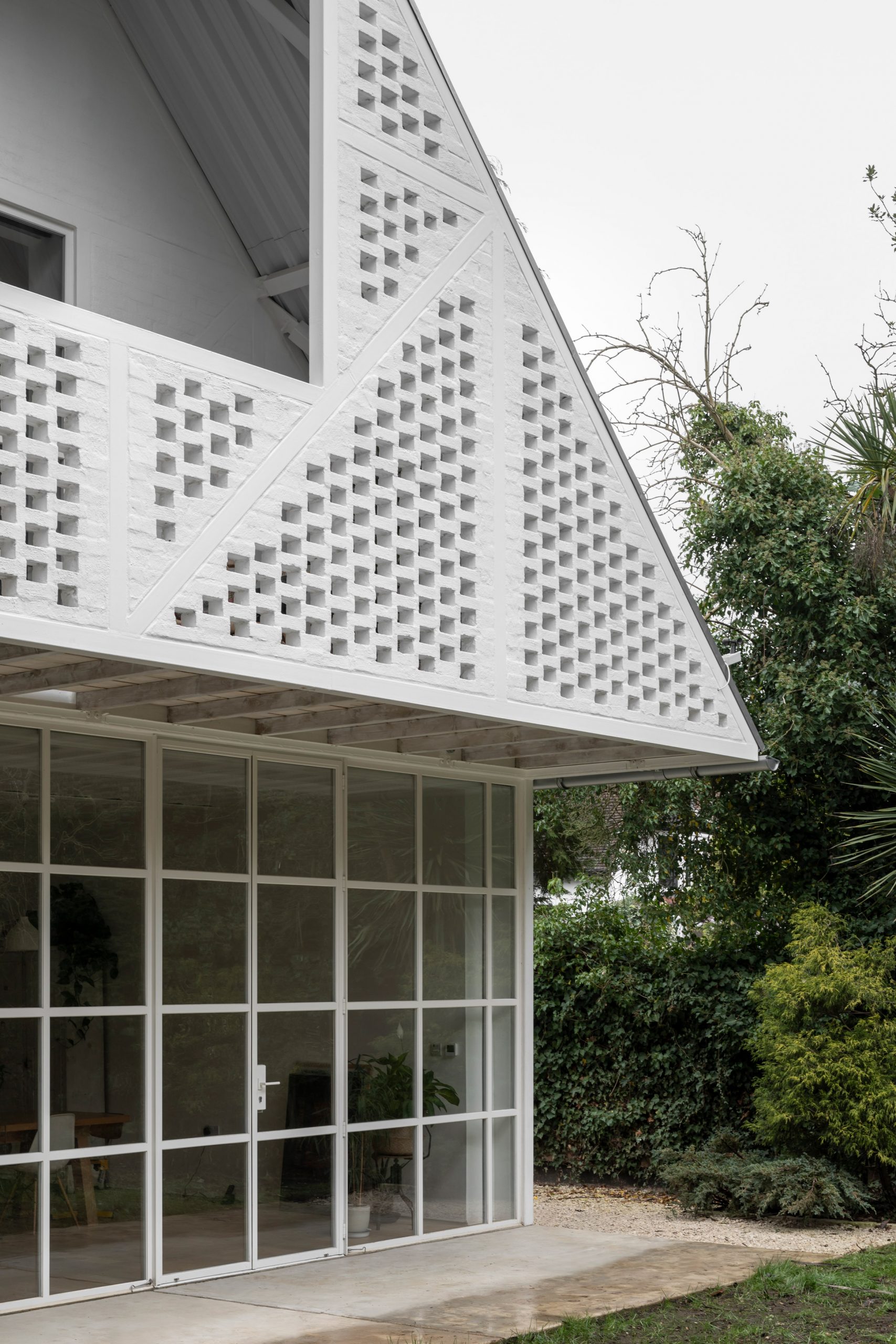 On the road-facing facade of the building, the impact is muted as both the steel and brick elements are painted white.

However, on the garden-facing facade, the effected is highlighted through the use of perforated bricks that enclose the first-floor balcony. 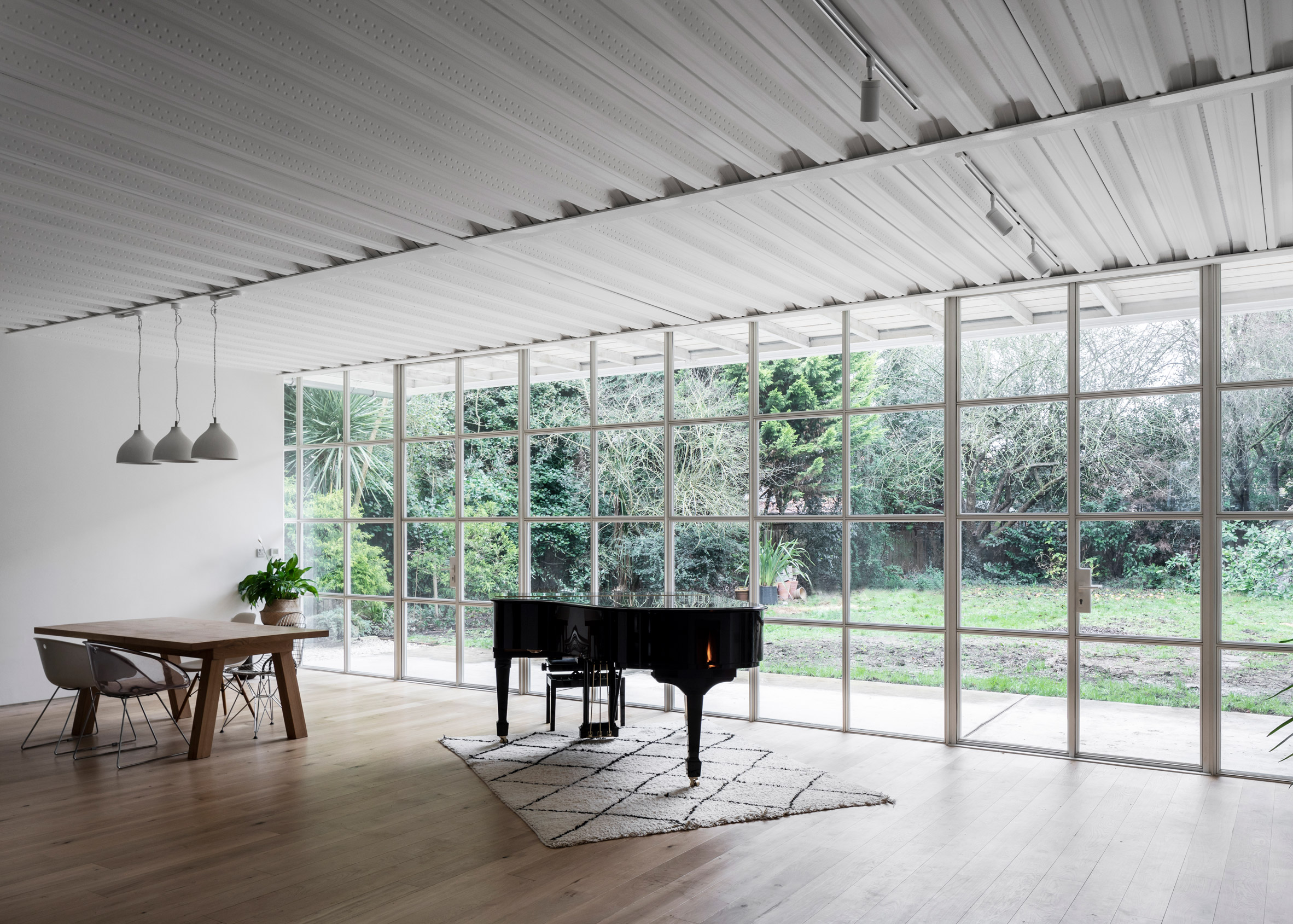 Within the home the steel frame allowed the studio to create large open spaces including a living and dining area that overlooks the garden through full-height windows. 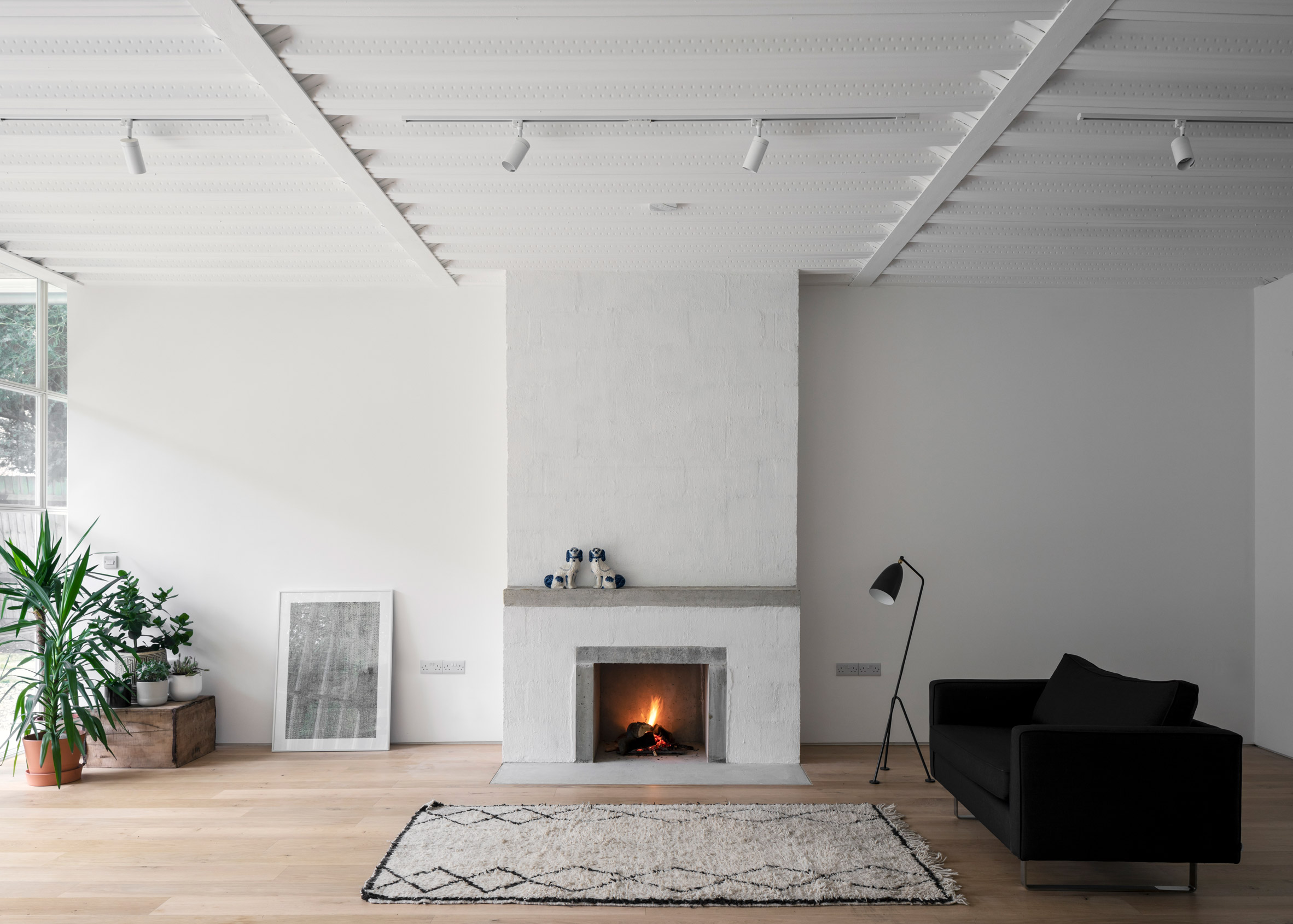 “The exposed decks add texture to the interior palette and were seen as a modern interpretation of exposed Tudor timber beams.” 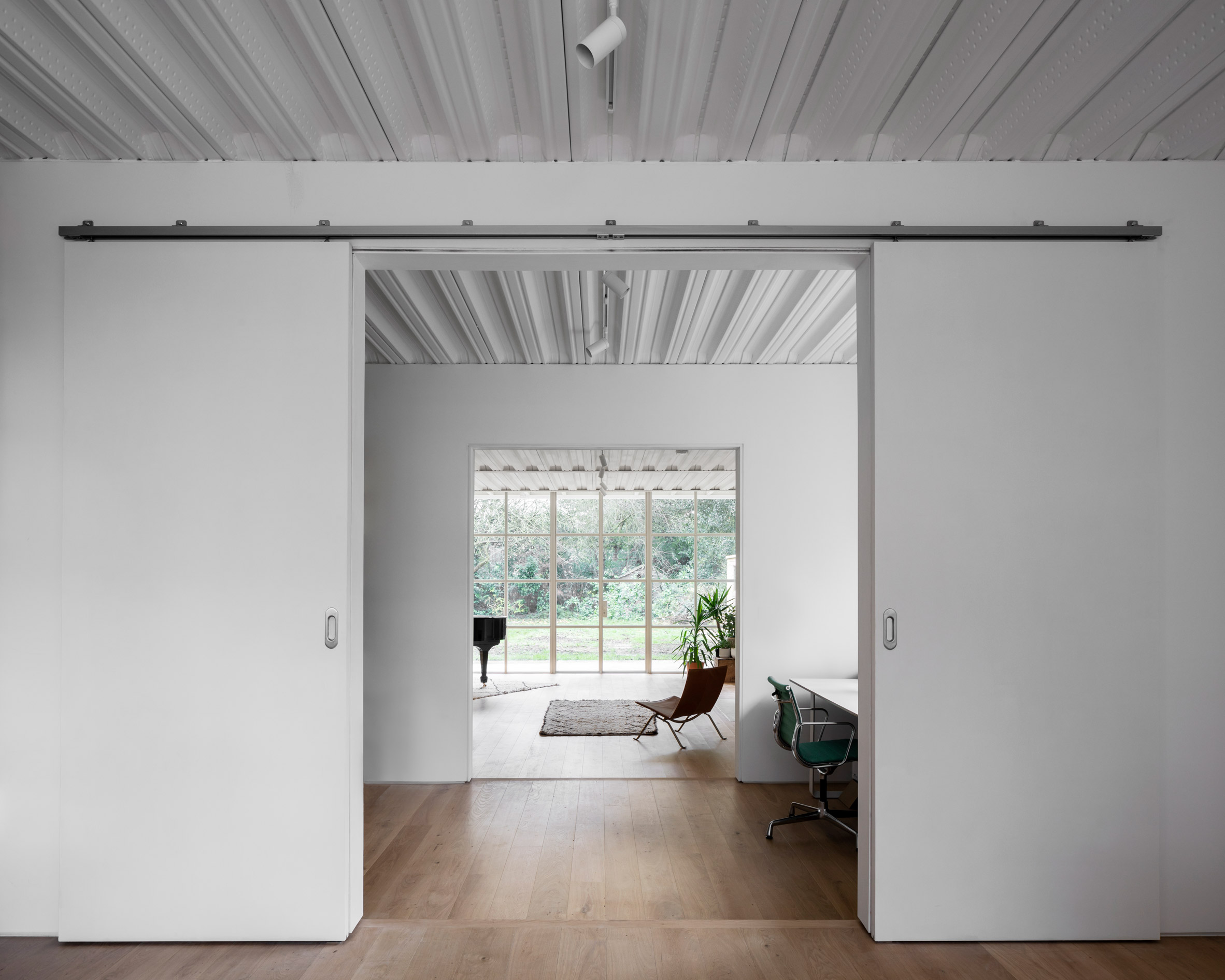 The home was built around a triple-height entrance hall that was created to express the industrial aesthetic running through the building.

Attached to this entrance space is a sitting room that leads through a study to the dining area and a small toilet. 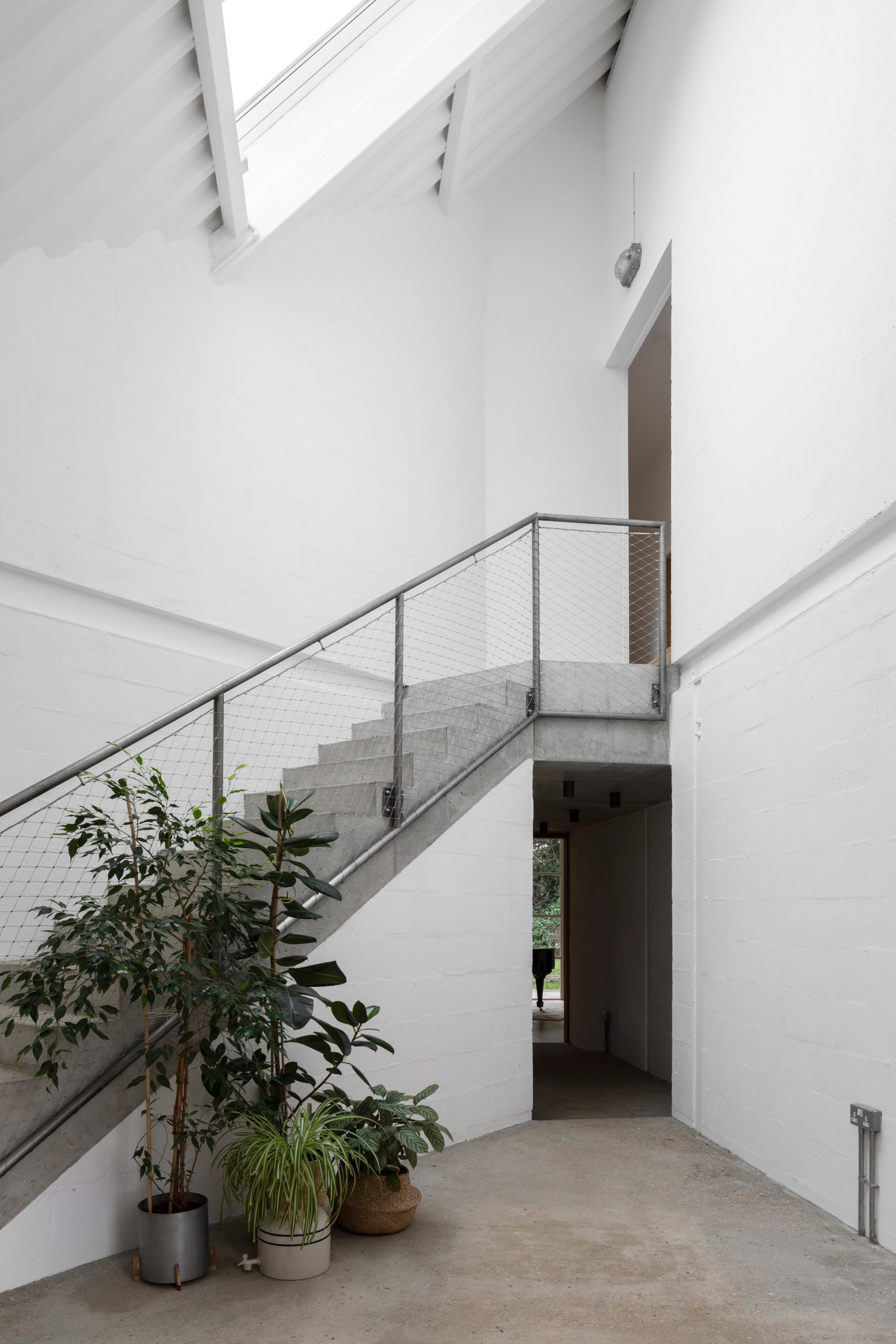 “The triple-height entrance hall is the primary circulation space, kinked at 45 degrees in plan, it is the only area that breaks from the regular grid around which all other spaces are arranged,” explained Surman.

“We wanted the entrance space to be overtly industrial so upon entry, one would instantly understand that the house is something different,” he continued.

“By combining the verticality you might expect from a warehouse with similarly industrial materials – steel, concrete, and exposed block-work – the hallway is clearly the most industrial space in the house and works as a bit of a counterpoint to the warmer habitable rooms.” 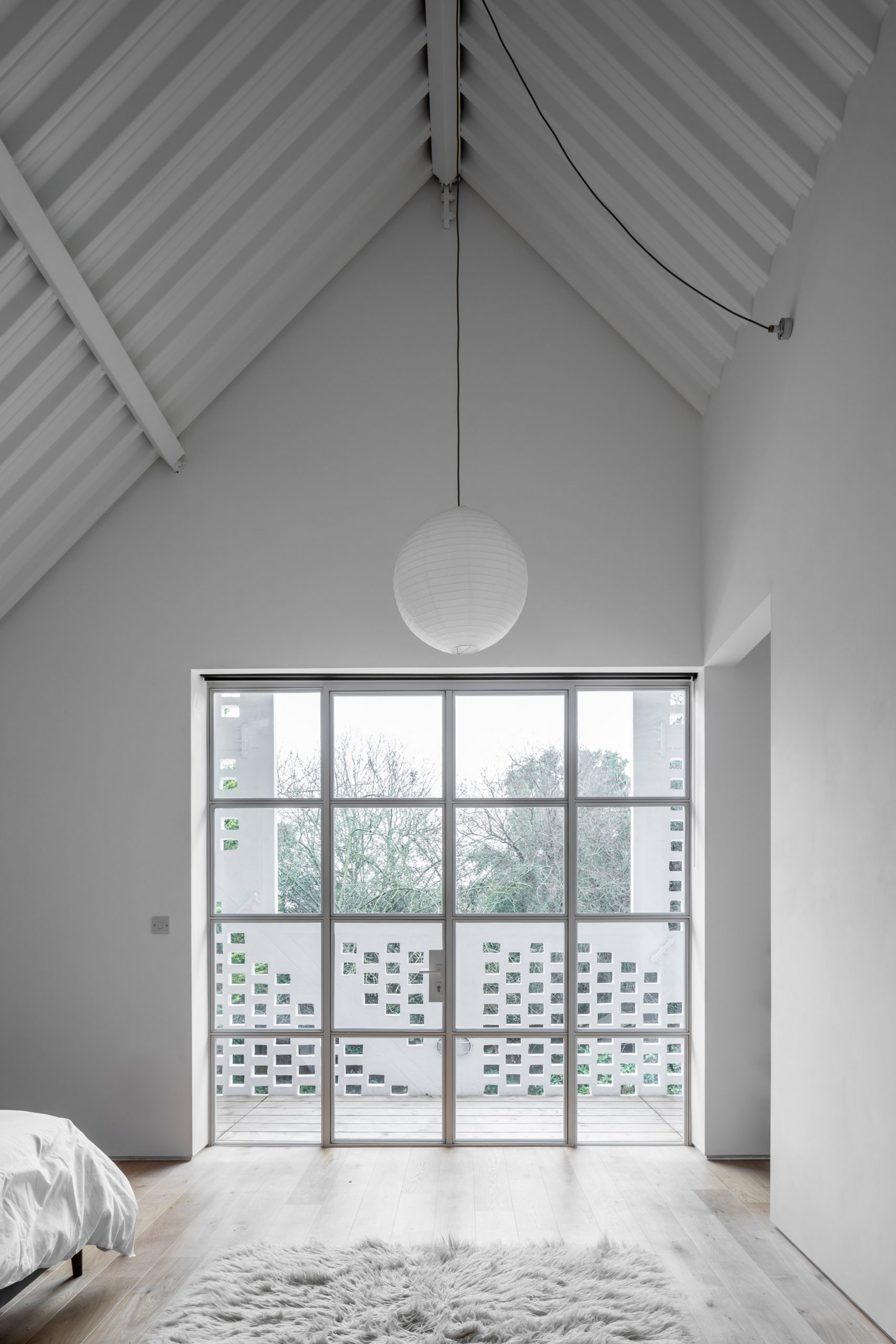 A concrete stair placed at 45 degrees within the entrance hall leads up to the first floor, which contains two bedrooms, two bathrooms and two dressing rooms.

The master bedroom has access to a large balcony that overlooks the rear garden. 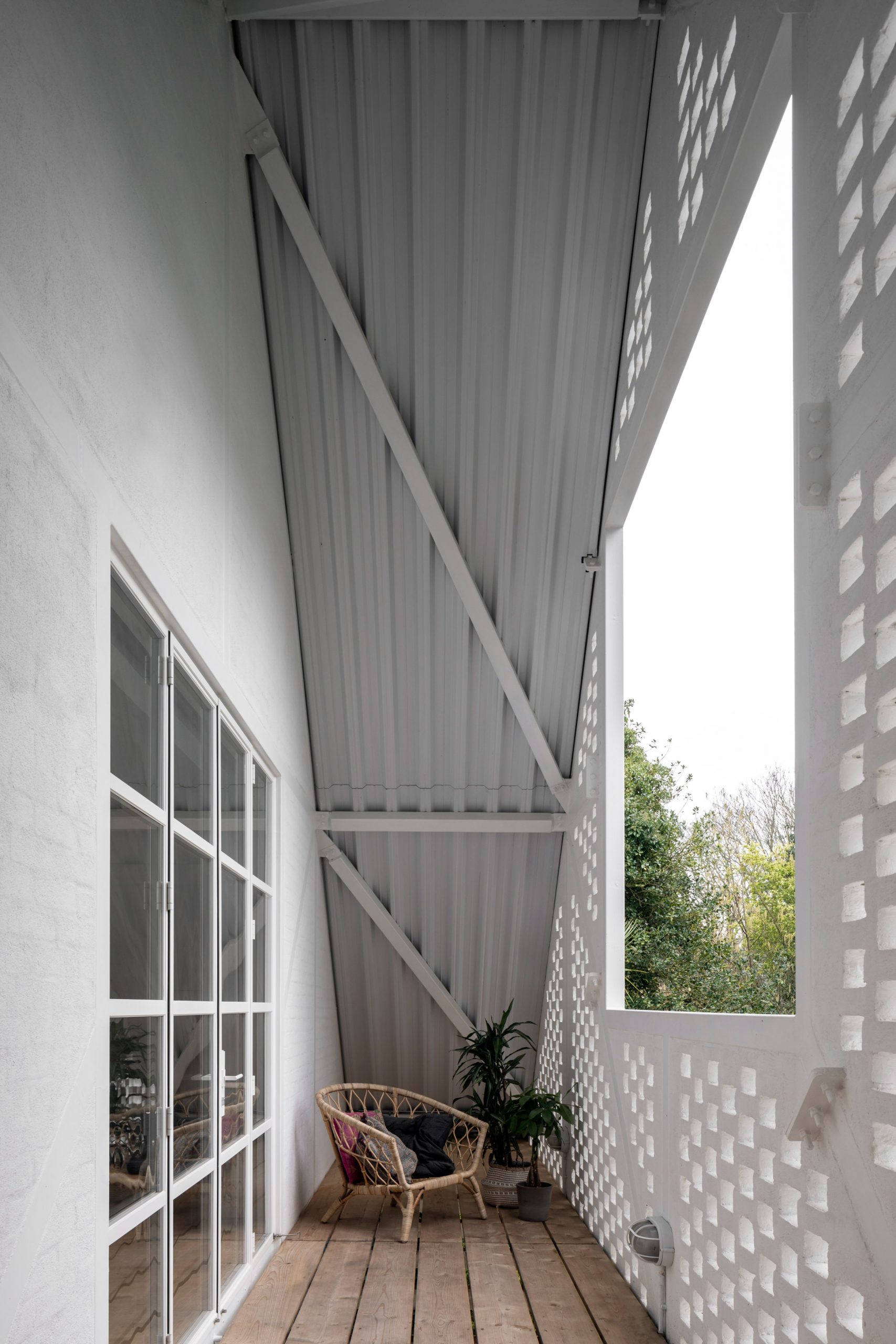 Although the house may not be instantly recognisable as a take on mock-Tudor architecture, Surman Weston hopes that the details make the link clear.

“We didn’t set out to mock mock-Tudor, more to reference it. Although there are plenty of ugly mock-Tudor houses nearby, there are also some good examples,” he said.

“Through various design iterations, the extent of mocking fluctuated. In the end, from afar, one would perhaps not realise the house references mock-Tudor at all but on closer inspection, a few telling details and references are revealed.” 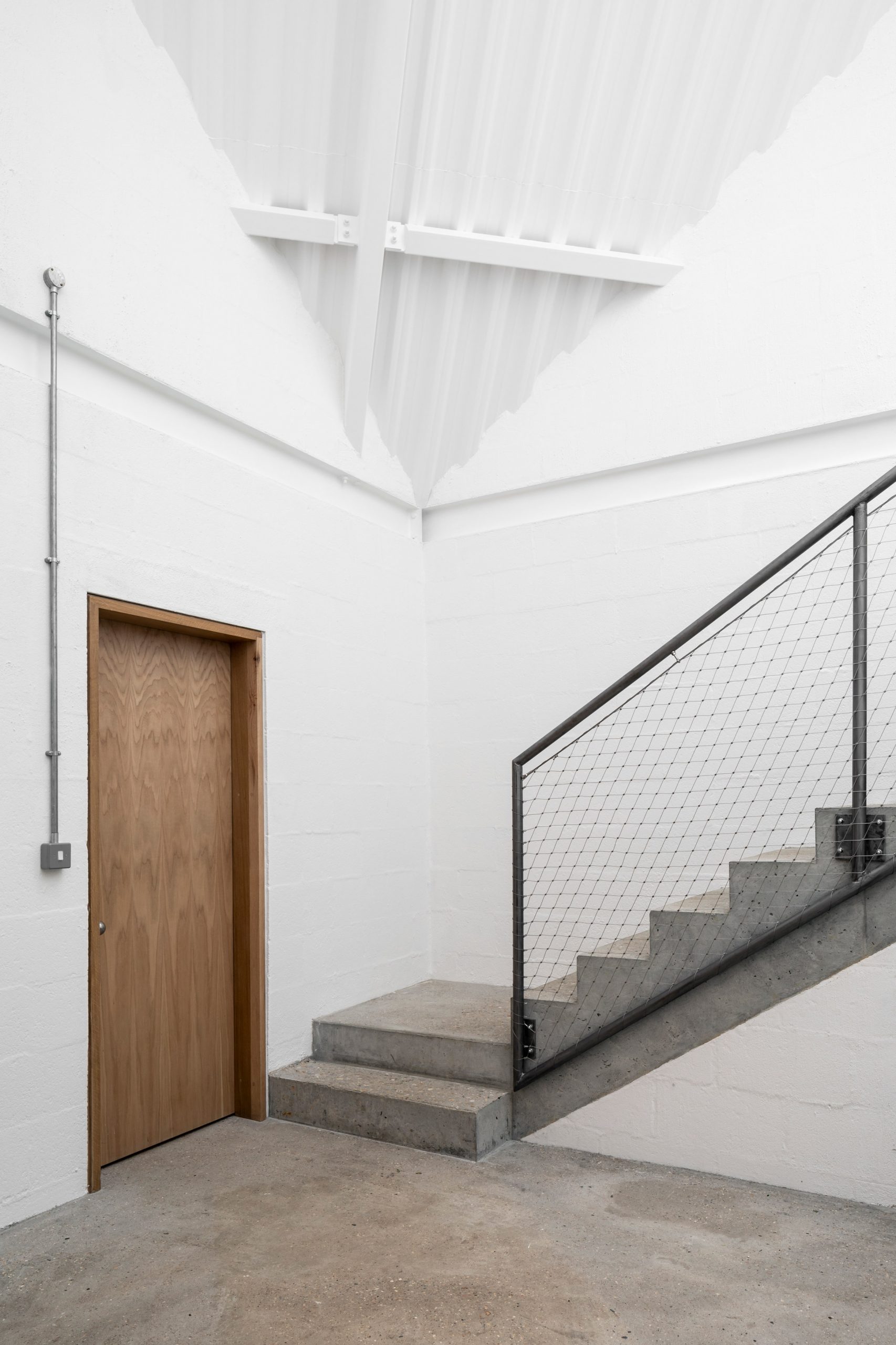 “The more time that’s passed since the house completed, the more we’ve realised just how different the house is. In a way that is exactly what the house is; it’s different and unusual, perhaps a little odd,” Surman continued.

“The combination of the client’s love for all things industrial, the typical suburban setting and the fusion and subversion of elements of both result in a strange and, hopefully, interesting house.”

Surman Weston is a London-based architecture studio established in 2014 by Tom Surman and Percy Weston. The studio previously built a cork-covered studio for sewing and music and used stained glass to divide up spaces in a London co-working space inside a former church.

Photography is by Johan Dehlin.