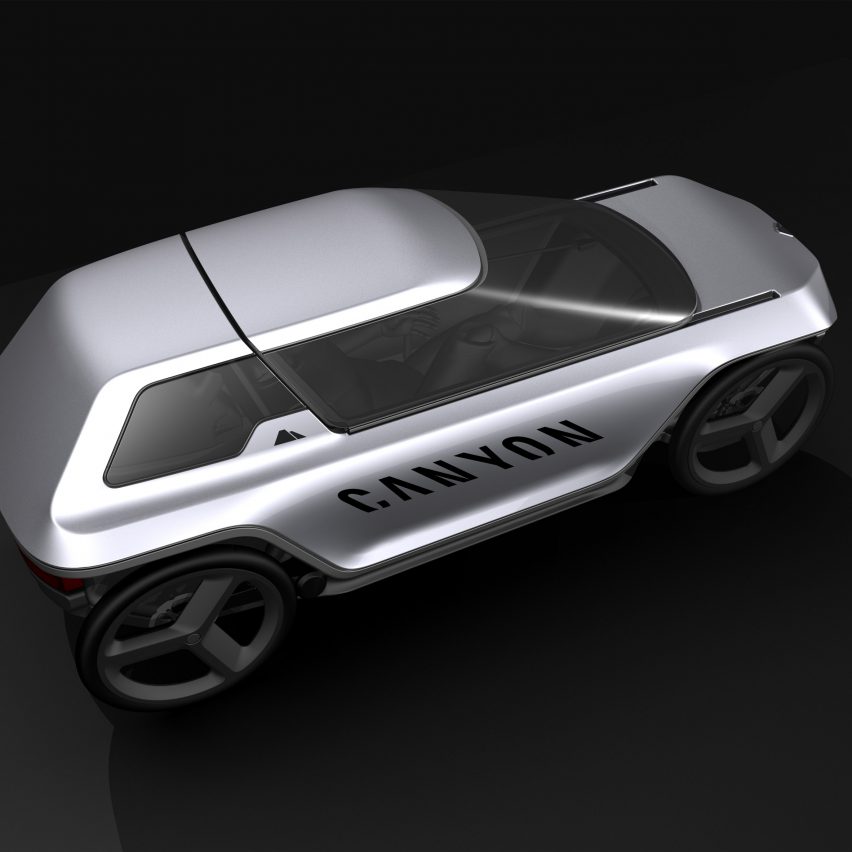 German bicycle manufacturer Canyon has developed a Future Mobility Concept vehicles with four wheels and an enclosed cockpit like a car but a pedal-assisted electric bike under the hood.

According to the brand, the design offers “a revolutionary alternative to both the automobile and the bicycle” by sheltering the driver from the elements and offering increased storage space when compared to a bike while cutting down on emissions and time spent in traffic.

The vehicle’s stocky, chrome shell resembles that of Tesla’s infamous Cybertruck but underneath it is essentially a recumbent e-bike, in which the driver sits slightly reclined while pedalling. Manoeuvring the vehicle is performed using two under-seat joysticks.

As major cities across the world are starting to re-prioritise cyclists over cars in their urban planning due to the coronavirus pandemic, Canyon hopes its concept can fast-track this process by “re-imagining how bicycle technology can reclaim space on the streets”.

The vehicle has two different speed modes, allowing it to travel up to 25 kilometres per hour on a cycle path and up to 60 on regular roads with the help of a 2000 watt-hour battery.

At just over two metres long and 83 centimetres wide, the vehicle remains agile enough to weave through traffic, while offering space behind the driver for luggage, groceries or a child of up to 11 years old.

“It’s fast and stable enough to fly down the open road, yet light and agile enough to slide into the bike lane when things get backed up,” the brand claims.

In total, the vehicle could travel up to 150 kilometres on a single charge.

The capsule that encases the rider features shock absorbers and a panoramic windshield complete with wipers and heaters to reduce fogging while an internal compartment can be completely sealed to ward off wind and rain.

This idea was born from the insight that, although micro-mobility solutions such as scooters and e-bikes are becoming increasingly popular, 45 per cent of potential users still want a form of transport that protects them from the elements.

Instead of opening a door on the side, the vehicle can be accessed by sliding the top of the capsule all the way forwards and climbing in, much like with a bobsleigh.

The top can also be left partially open to recreate a convertible driving experience.

Canyon’s Future Mobility Concept vehicle was created in collaboration with the Technical University of Aachen and is currently on view in the brand’s showroom in Koblenz, Germany, alongside its two latest e-bikes.

In the hopes of tapping into a similar niche, French car manufacturer Citroën started rolling out a subscription car called Ami this year, which is technically a fully electric quadricycle and hence does not require the driver to have a license.

Canadian start-up VeloMetro has embraced a similar concept since it was founded in 2014, with its fleet of three-wheeled, electric-assisted “velomobiles” available to rent by the minute.

Photography is by Stefan Simak and renders are courtesy of the Canyon design team.