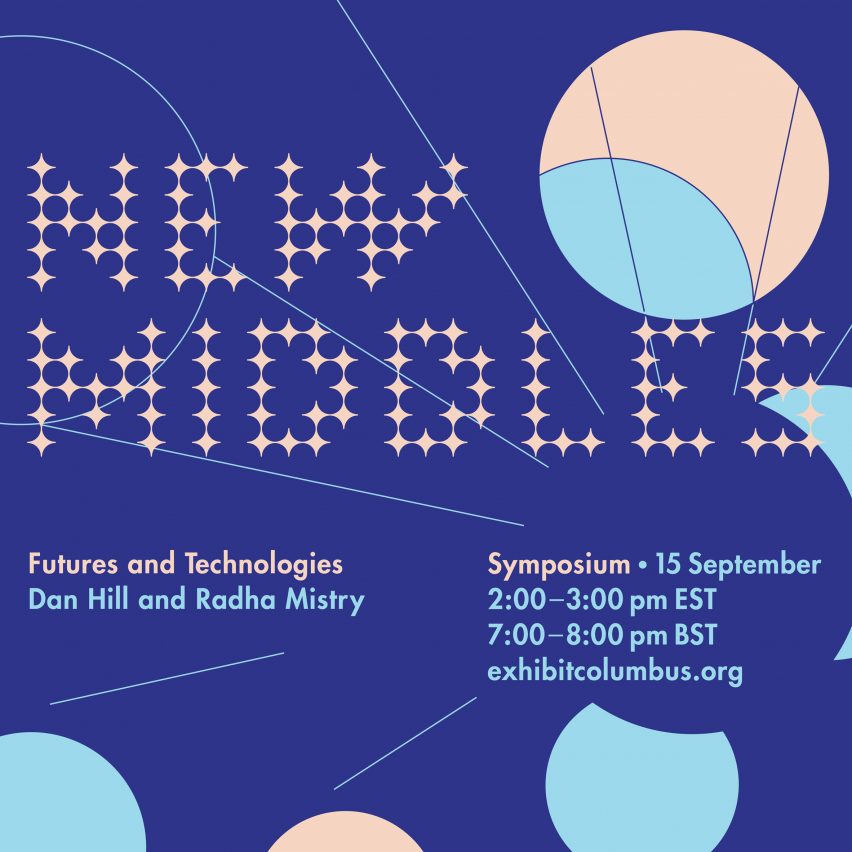 Futurists Dan Hill and Radha Mistry will discuss the use of strategic foresight and storytelling in design in the first of a series of live talks produced by Dezeen for Exhibit Columbus. Watch the conversation here from 7:00pm UK time (2:00pm EST) on Tuesday 15 September 2020.

Called New Middles: Futures and Technologies, the talk is the first in a series of conversations created for Exhibit Columbus‘ New Middles symposium, which will look at the designed future of the centre of the USA.

“This conversation is premised on an idea attributed to science fiction writer William Gibson: the future is already here, it’s just not evenly distributed,” said the curators.

In a live conversation moderated by Dezeen’s editor-in-chief Marcus Fairs, Hill and Mistry will explore questions surrounding the design industry’s uses of fiction and strategic foresight – the term given to the practice of analysing current trends in order to predict and prepare for future scenarios.

“What new normal realities from education and equity to mobility and manufacturing will shape what’s next?” asked the curators. “Whose voices are represented? How might we extrapolate emergent technologies and contemporary conditions facing the Midwest into a speculative future of the middle?”

Alongside his design work, Hill is also a visiting professor at University College London’s Institute for Innovation and Public Purpose, an adjunct professor at RMIT University in Melbourne and one of the Mayor of London‘s Design Advocates.

Radha Mistry has a background in architecture, narrative environments and strategic foresight. She currently leads the Foresight practice at Autodesk, which explores the impact of emerging technologies and how they will change the way people design and make in the future.

Prior to Autodesk, Mistry focused on the future of work with the Steelcase Applied Research group and was part of the Arup Foresight + Innovation team in London and San Francisco.

Mistry has also exhibited during the Lisbon Architecture Triennale and worked on design-led community engagement initiatives in cities across Europe.

This talk will be produced by Dezeen in collaboration with Exhibit Columbus as part of its New Middles online symposium, which will take place from 15 September until 29 October 2020.

Find out more about the symposium and view the schedule ›

The post Exhibit Columbus to present live talk on strategic foresight and storytelling in design appeared first on Dezeen.