Home/Hinterhouse is a cedar-clad hideaway in Quebec woodland

Hinterhouse is a cedar-clad hideaway in Quebec woodland 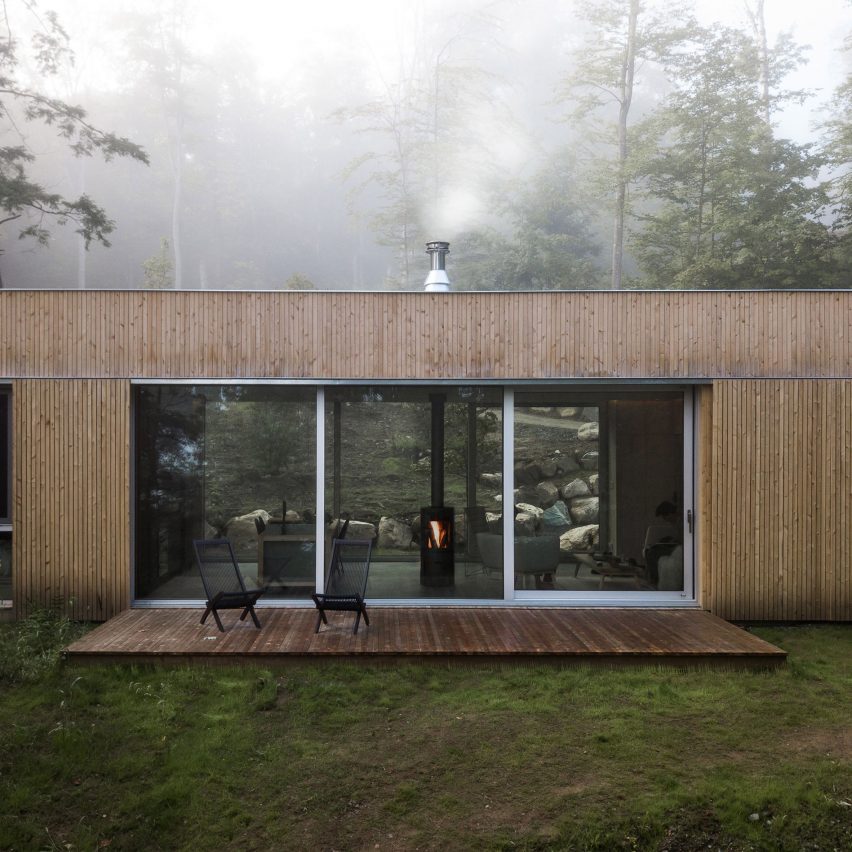 Architecture studio Ménard Dworkind has designed a slender cedar-clad holiday home with a matching sauna on a forested hillside in Quebec.

Located in a village called La Conception, the Hinterhouse cabin and sauna are clad in white cedar board, which Ménard Dworkind chose so it will weather over time and blend in with its natural setting. 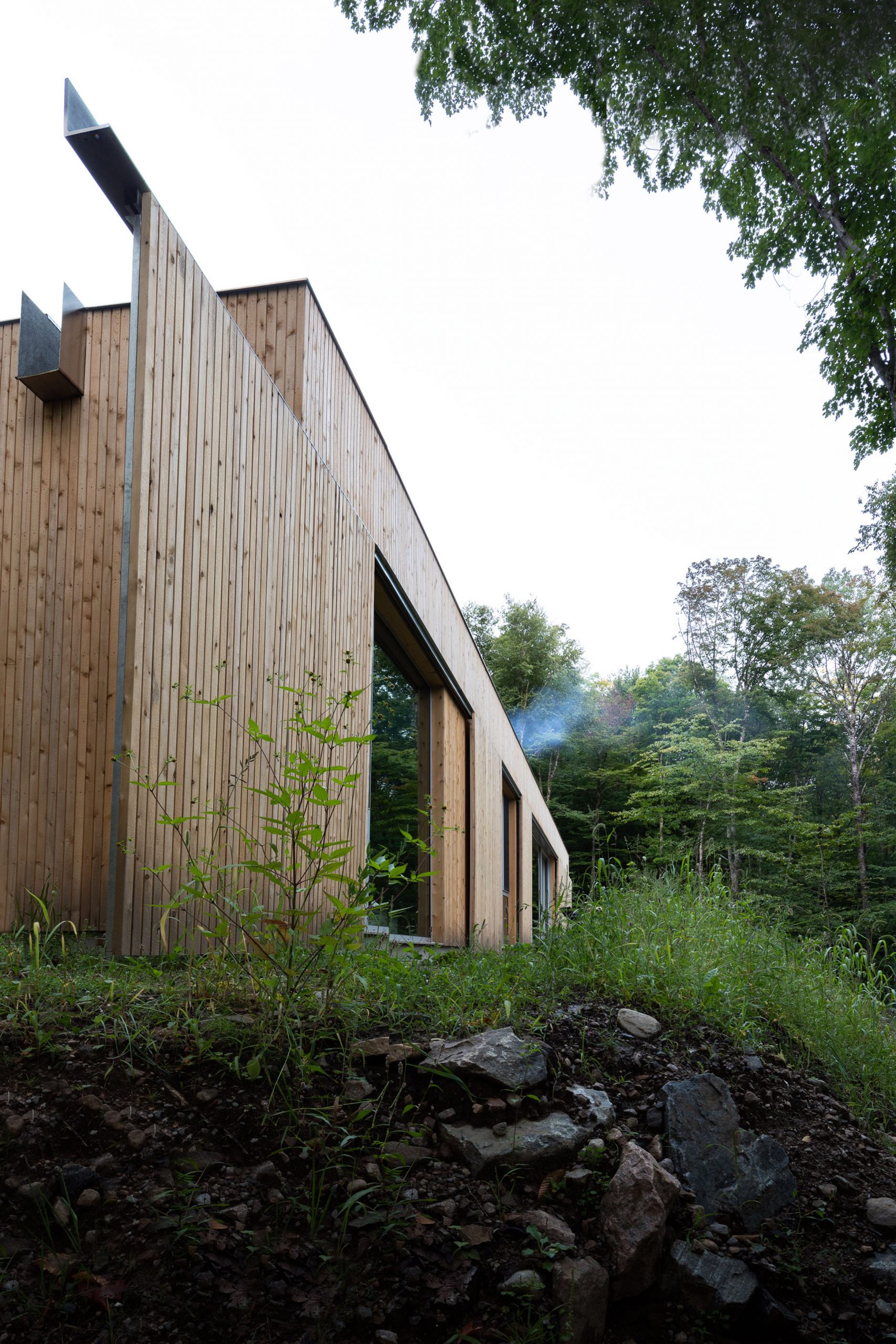 The cedar is also used for the house’s shutters that slide across windows to provide views of the Mont-Tremblant valley.

“The shutters were designed to mimic the siding; the gaps in the shutters align with the channels in the cedar cladding,” Ménard Dworkind explained.

“The house can transform and close up completely for protection from the elements, or slide open to allow the light and views in.” 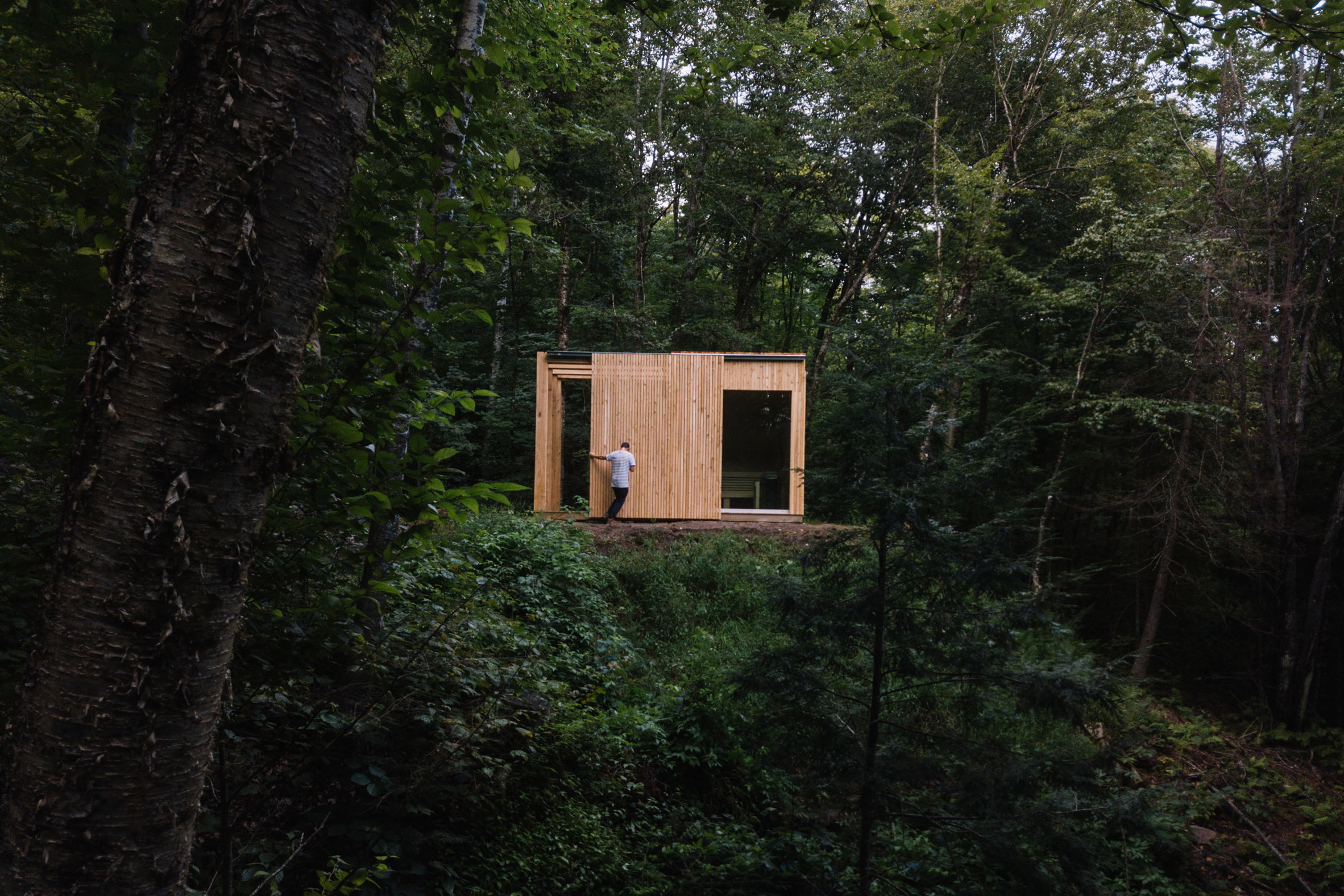 Ménard Dworkin also used red pine planks that are oiled white to cover interior walls and ebony-stained Douglas fir plywood to clad a central volume. It said most of the wood is a sustainably sourced.

“The skin and bones of the house were built almost entirely out of sustainably-forested native wood,” it added. 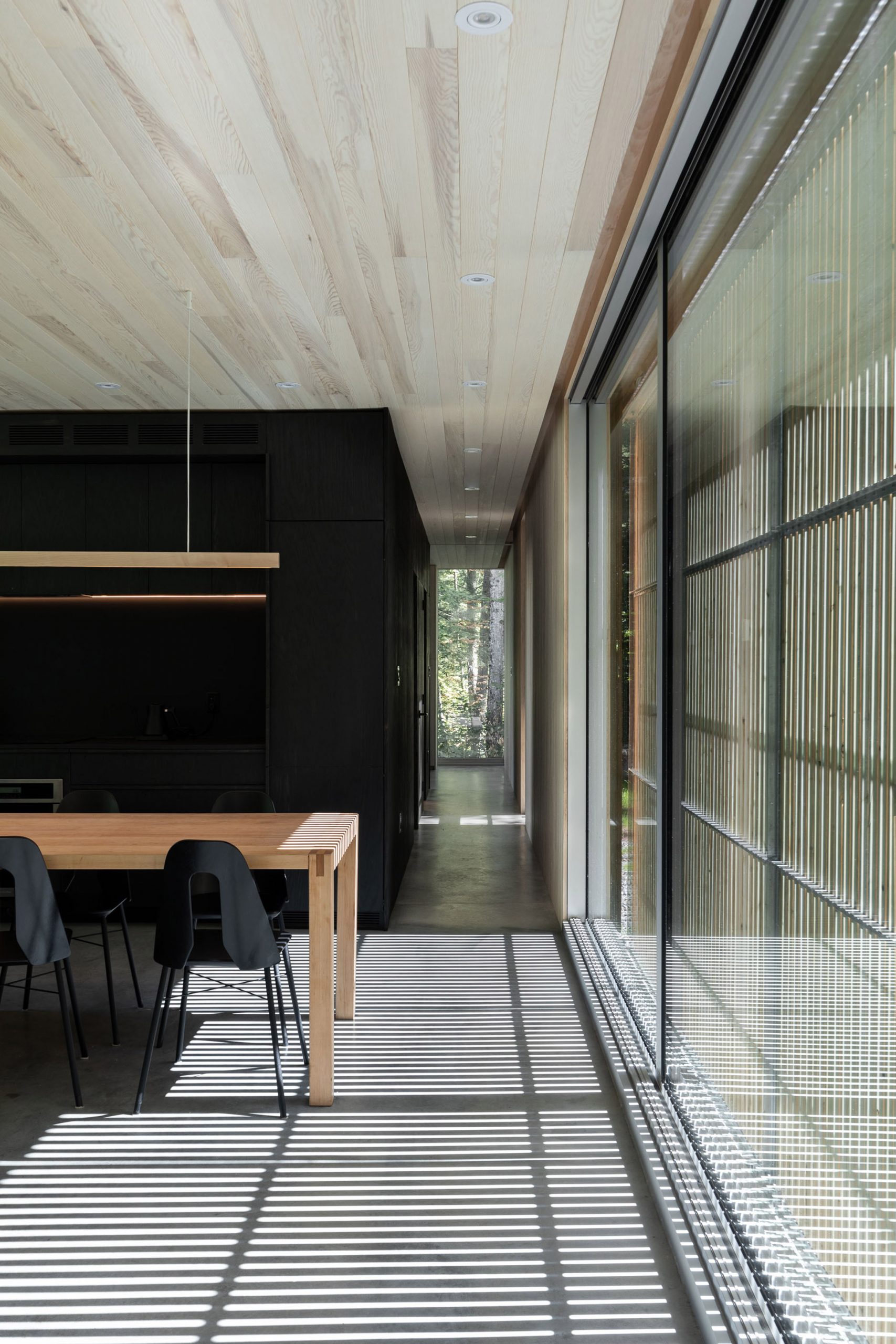 The central black plywood-covered block contains a bedroom, laundry room and bathroom, while a corridor runs alongside leading to the main bedroom at its rear. 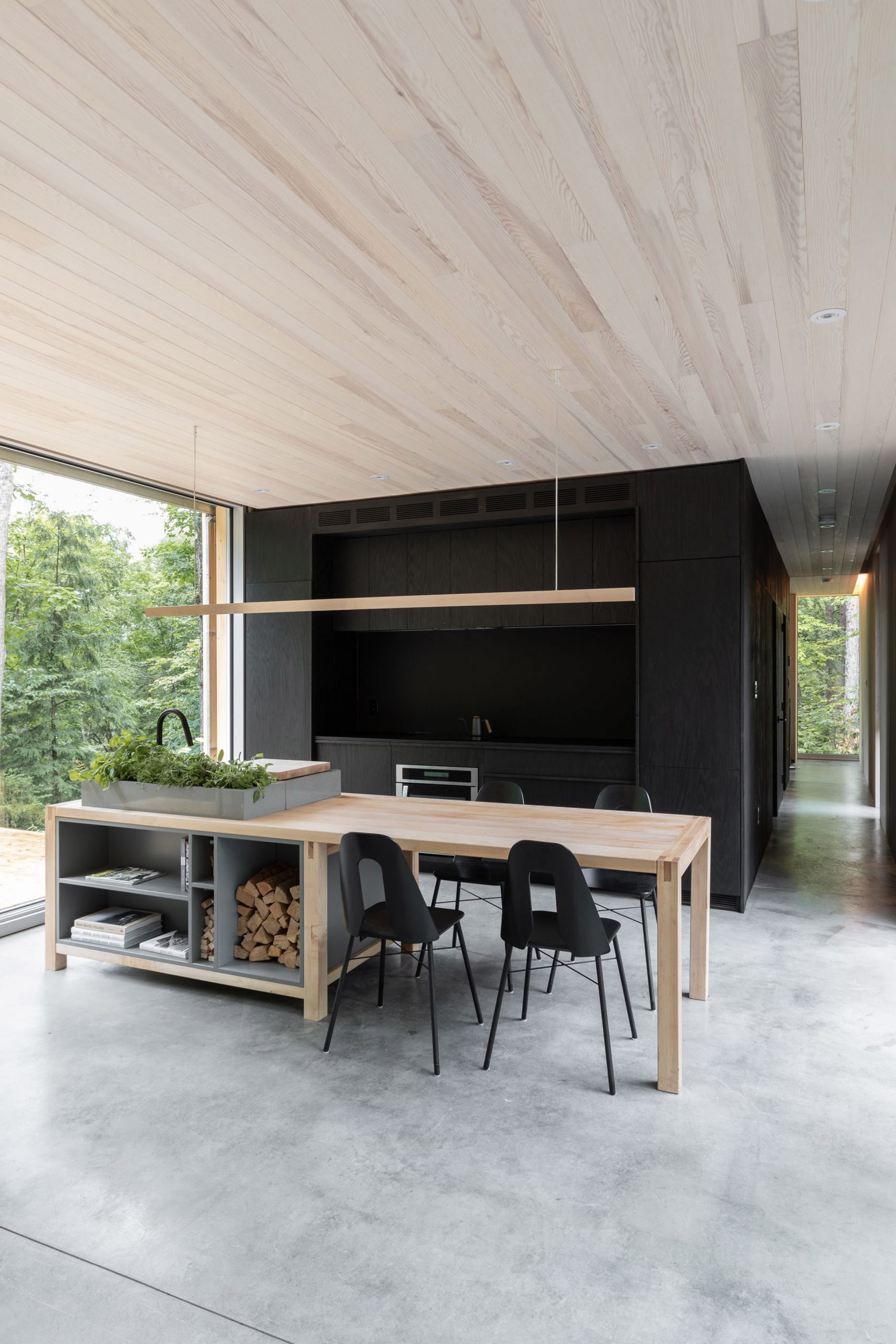 A kitchen sink and oven is built into its front side facing a maple farmhouse table that doubles as a kitchen island to save space. It has built in storage for wood and cooking books among other features.

“A custom vessel-sink raises a cutting board to a comfortable height and is compartmentalised to include a herb garden full of basil, mint, and sage,” Ménard Dworkind  added. 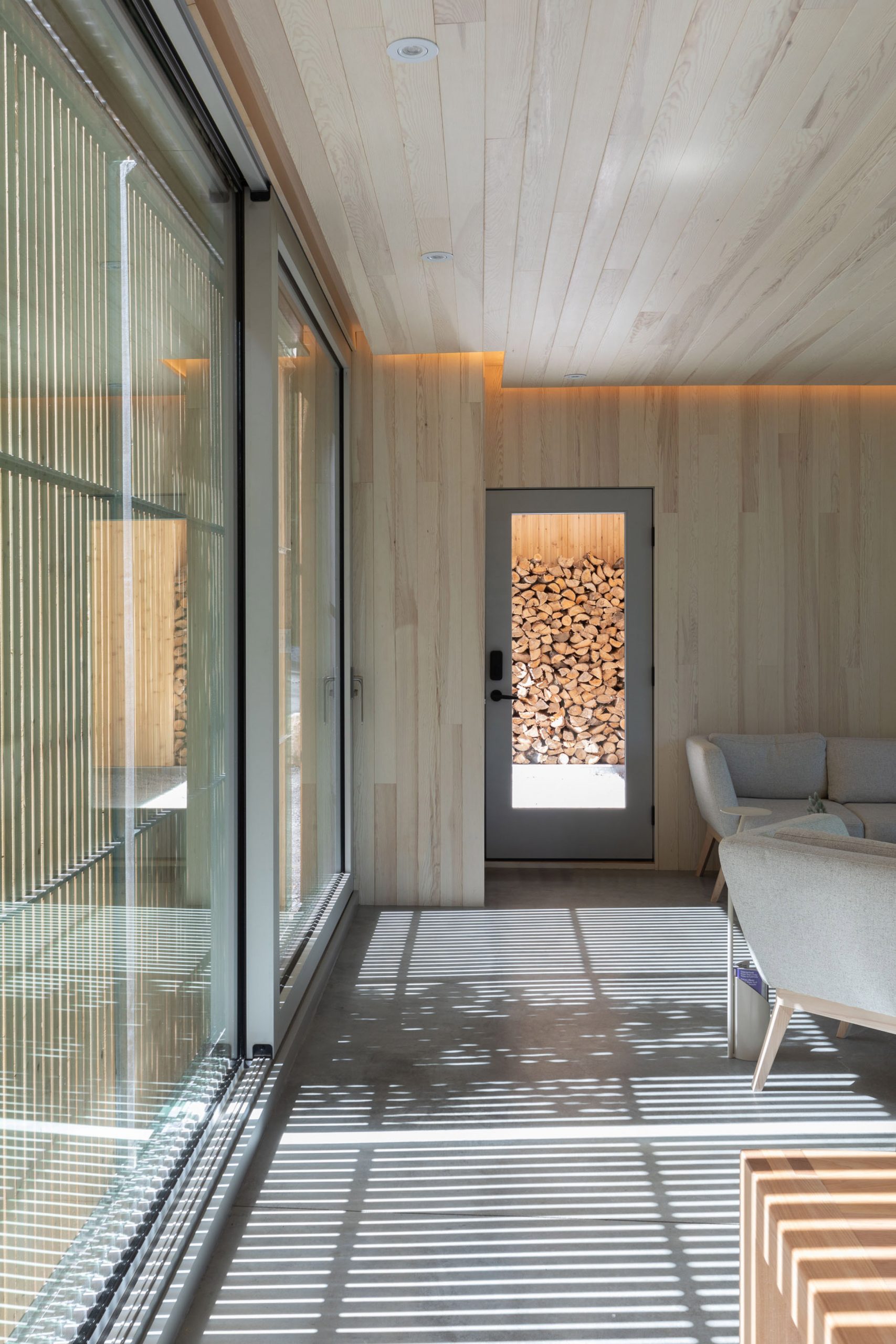 The kitchen and dining area form part on open-plan living space flanked on either side by large windows. In the middle of the room between the table and the lounge there is a wood-burning stove.

Polished concrete flooring runs throughout the house, extending to seamlessly form the floor of a curbless shower in the bathroom. The walls of the bathroom are covered in pale wood and white mosaic tile with a matching sink stand. A pop of greenery is offered through a large window to the forested surrounding. 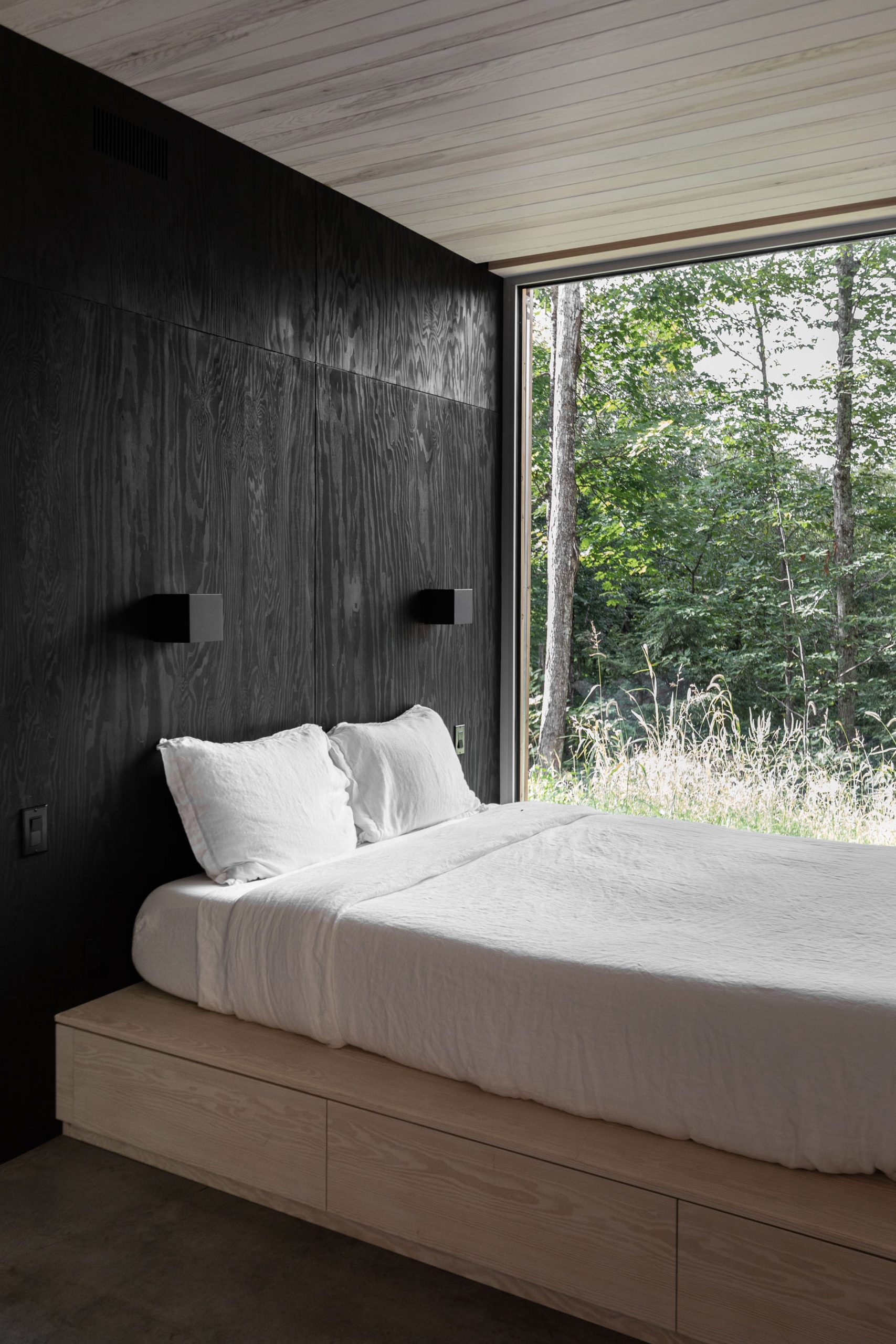 “A focus on transparency in every room pulls the distant landscape into the house,” said the studio.

The house, which has a car park cut out of one side, is linked to the sauna by a curving staircase that leads down the hillside. The sauna comes equipped with an outdoor shower and hammock for relaxing. 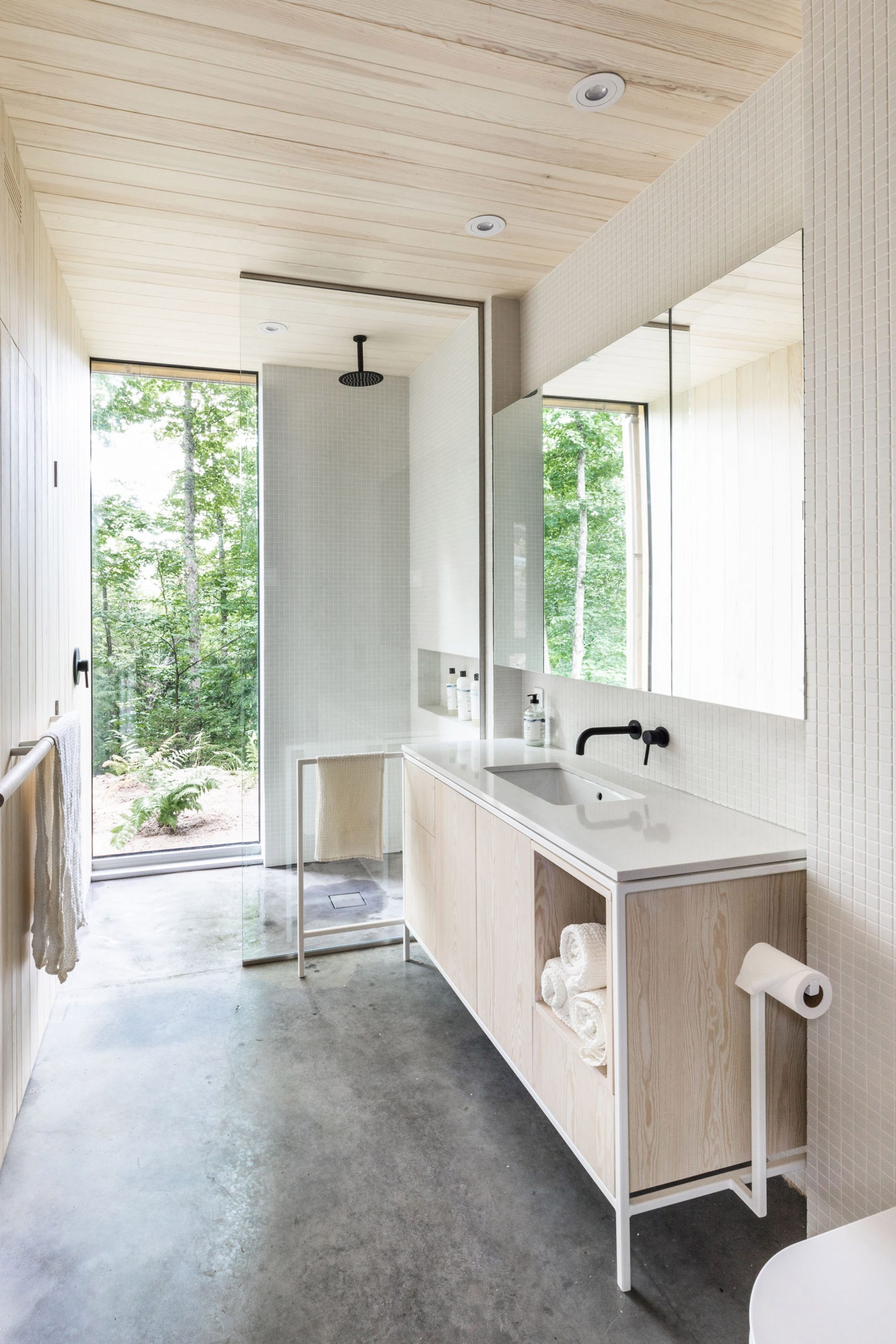 Hinterhouse was created for hotelier Hintercompany, which plants 1o trees with each booking. It has a slender width, just under five metres, because it is a model for a house that could be prefabricated and driven to its site. 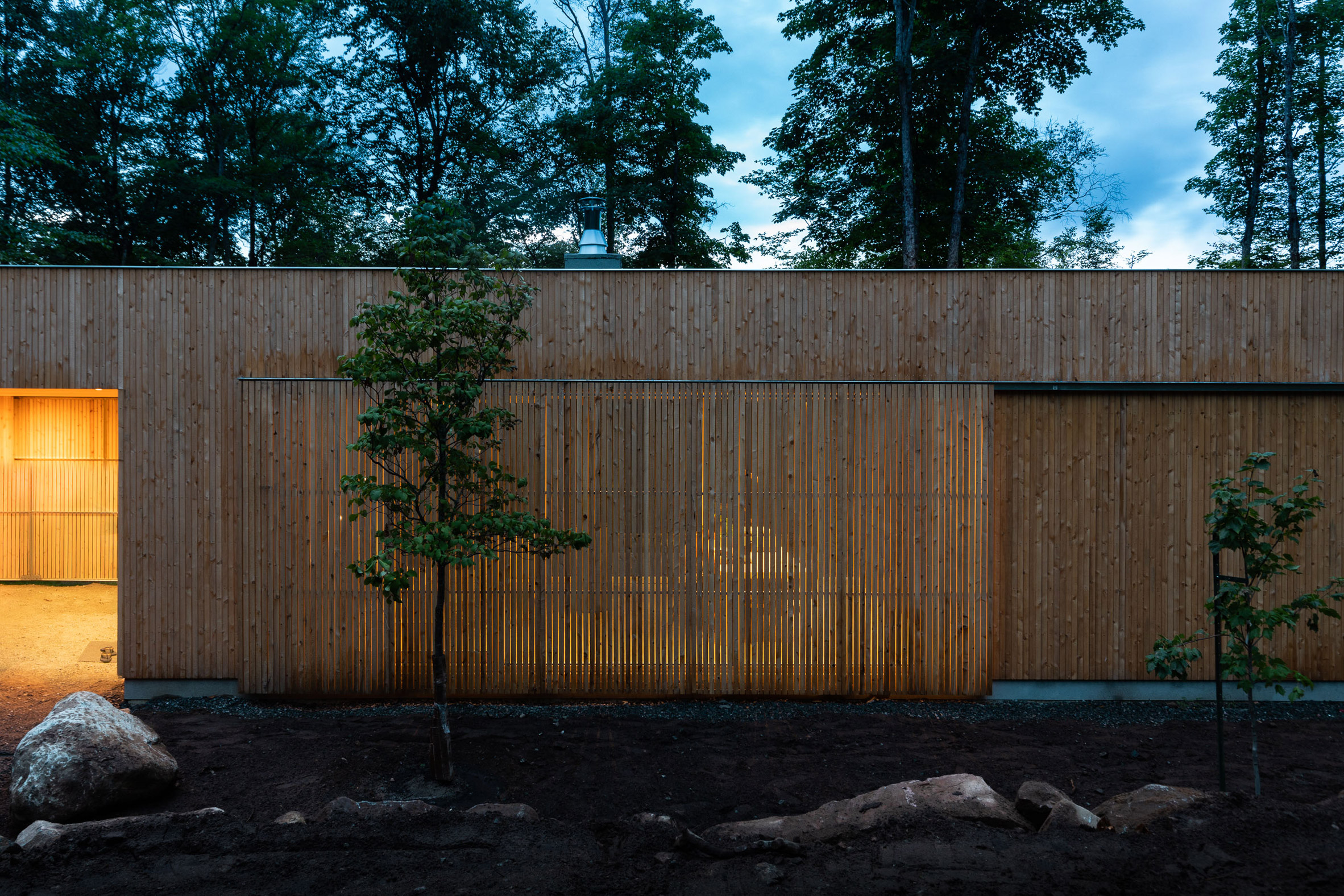 Opened in July this year, Ménard Dworkind said it had become spot for those looking for a safe retreat during the coronavirus pandemic.

“The Hintercompany hotel concept aims to provide an escape from the hustle and bustle of city life, providing its guests with an opportunity to strengthen their connection with nature,” it said. 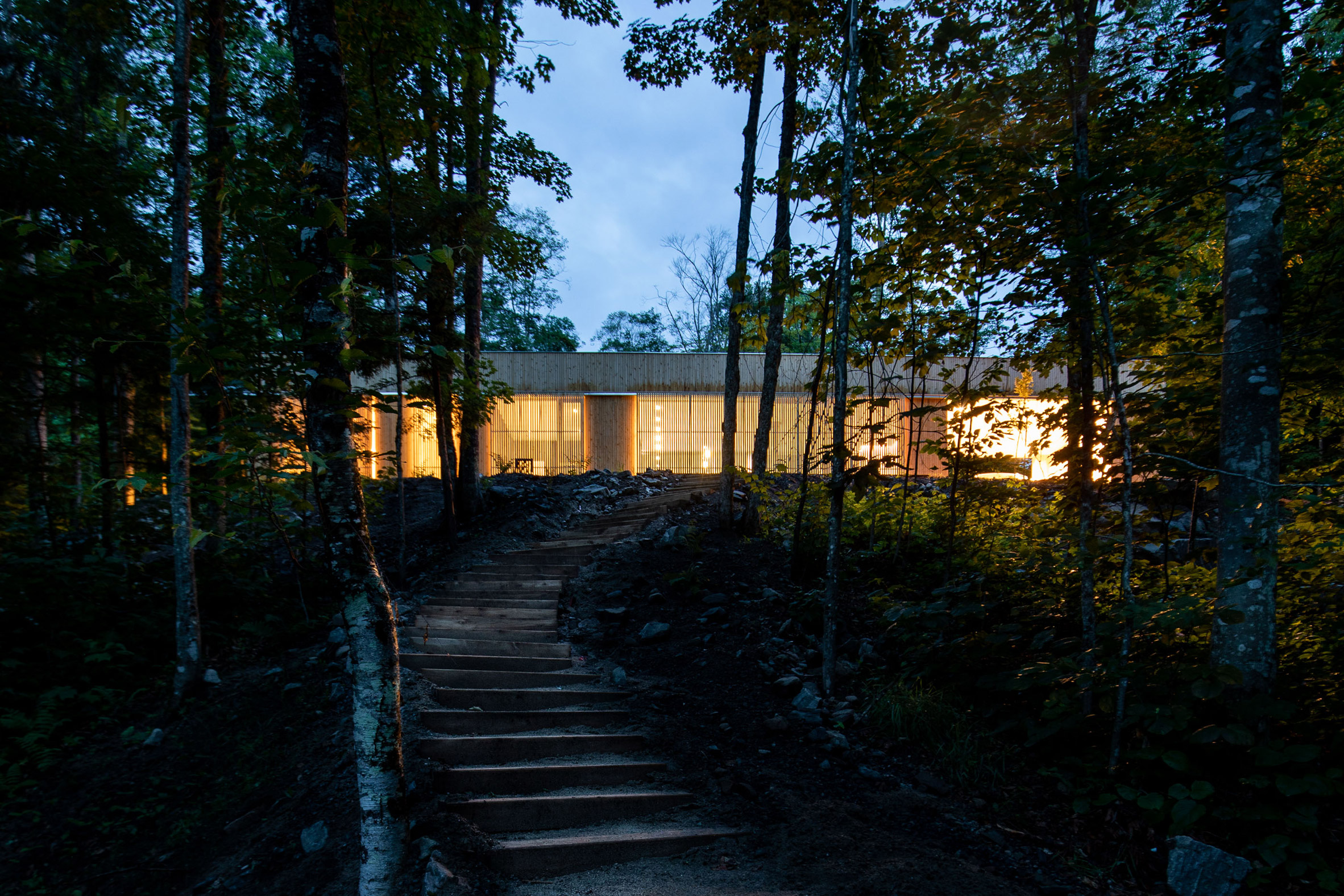 Ménard Dworkind was founded by architect David Dworkind and designer Guillaume Ménard in Montreal in 2017.

Other projects by the studio in the city include an eatery in modelled on a 1970s New York pizza restaurant and a colossal pan-Asian restaurant and bar that embraces Chinatown kitsch.

Photography is by David Dworkind.

The post Hinterhouse is a cedar-clad hideaway in Quebec woodland appeared first on Dezeen.