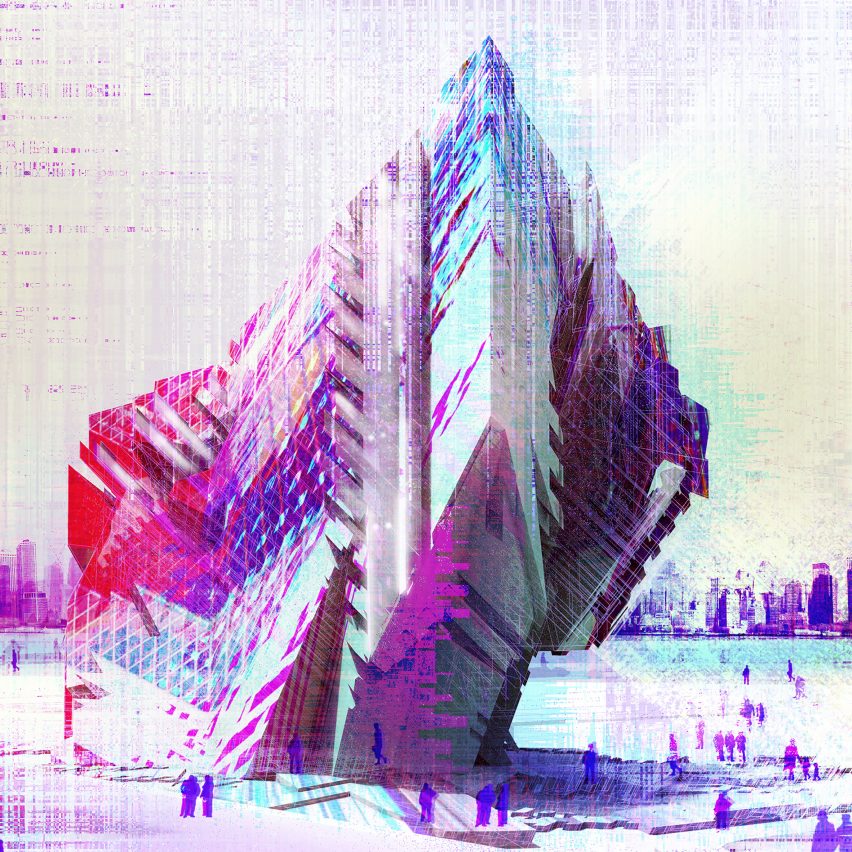 This school show by the Rensselaer Polytechnic Institute features speculative designs from current and former students, including a “shrine to science fiction” made from mechanical debris and a replacement for Steven Holl’s Hunter’s Point Library.

The projects were created as part of the students’ undergraduate degrees at the Rensselaer School of Architecture in Troy, New York.

Although created in different years, all of the designs focus on the “benevolent power of architecture” to tackle the most pressing social and environmental concerns of our time.

Statement from Evan Douglis, Dean of the Rensselaer School of Architecture:

“Situated within one of the premier technological research universities in the US, the School of Architecture at the Rensselaer Polytechnic Institute works in collaboration with leading scientists, engineers, technologists, artists and entrepreneurs.

“Together, we reimagine the future built environment as an ecologically responsive, energy-efficient, socially conscious and poetically charged constellation of buildings and infrastructures that reinvigorate and empower diverse communities around the world.

“We believe in the benevolent power of architecture to contribute to the environmental restoration of our planet, to establish a more productive, harmonious and symbiotic relationship with the natural world and to imbue our buildings with an awe-inspiring sense of wonder and delight.”

“The tearing down of domestic objects into their constituent parts provides the backdrop for architectural speculation in this foundation studio. The house began as an investigation of the aesthetic categories of a household record player and the ways it transfers energy.

“The house is conceived as a system of overlapping domestic programmes that produce, store, circuit and consume energy. In this process, domestic waste is collected and processed into bio-slurry. The house consists of a one-storey podium surrounded by a turntable composed of storage tanks, skylights and digesters. The caretaker’s tower consists of three rings, which intersect to form the living quarters around an interior balcony and composting tank.”

“This house consists of a constellation of globes, with each holding a different living area at its centre. The spaces where the spheres overlap allow for movement in-between. The house is set in a cold climate, so based on ecogeographical rules each room is formed with a minimum surface-area-to-volume ratio to prevent heat from dissipating and offer thermal insulation.

“The aggregation of the spheres results in valleyed intersections on the exterior. This is where the steel supports emerge and elevate the aggregates from the ground, creating a minimal footprint to further increase the building’s energy efficiency.” 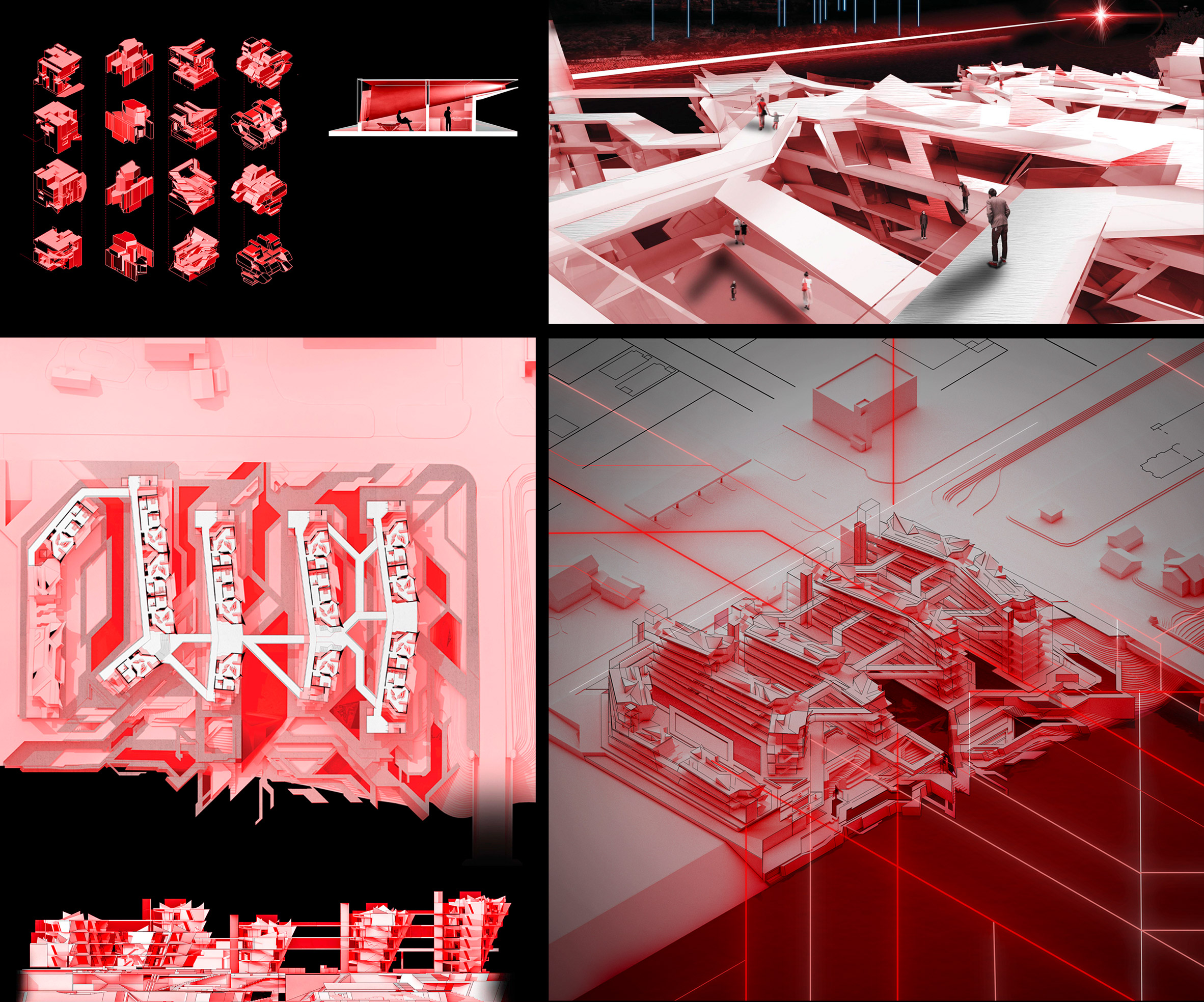 “In designing housing, we envision a way of life. We dream of utopia, imagine dystopia and hope to influence how we imagine communal living – as a network of relationships, even an ecology. Located on the riverfront in Cohoes, New York, this project is designated for residents nearing the Third Age, meaning people upwards of 65 years old.

“The intent of Habitat Nexus is to deliver on the promises of connection and community, which were originally espoused by technological platforms but which they failed to deliver. Through extreme architectural environments, this building awakens its inhabitants from their fabricated reality and enables new associations and relationships.” 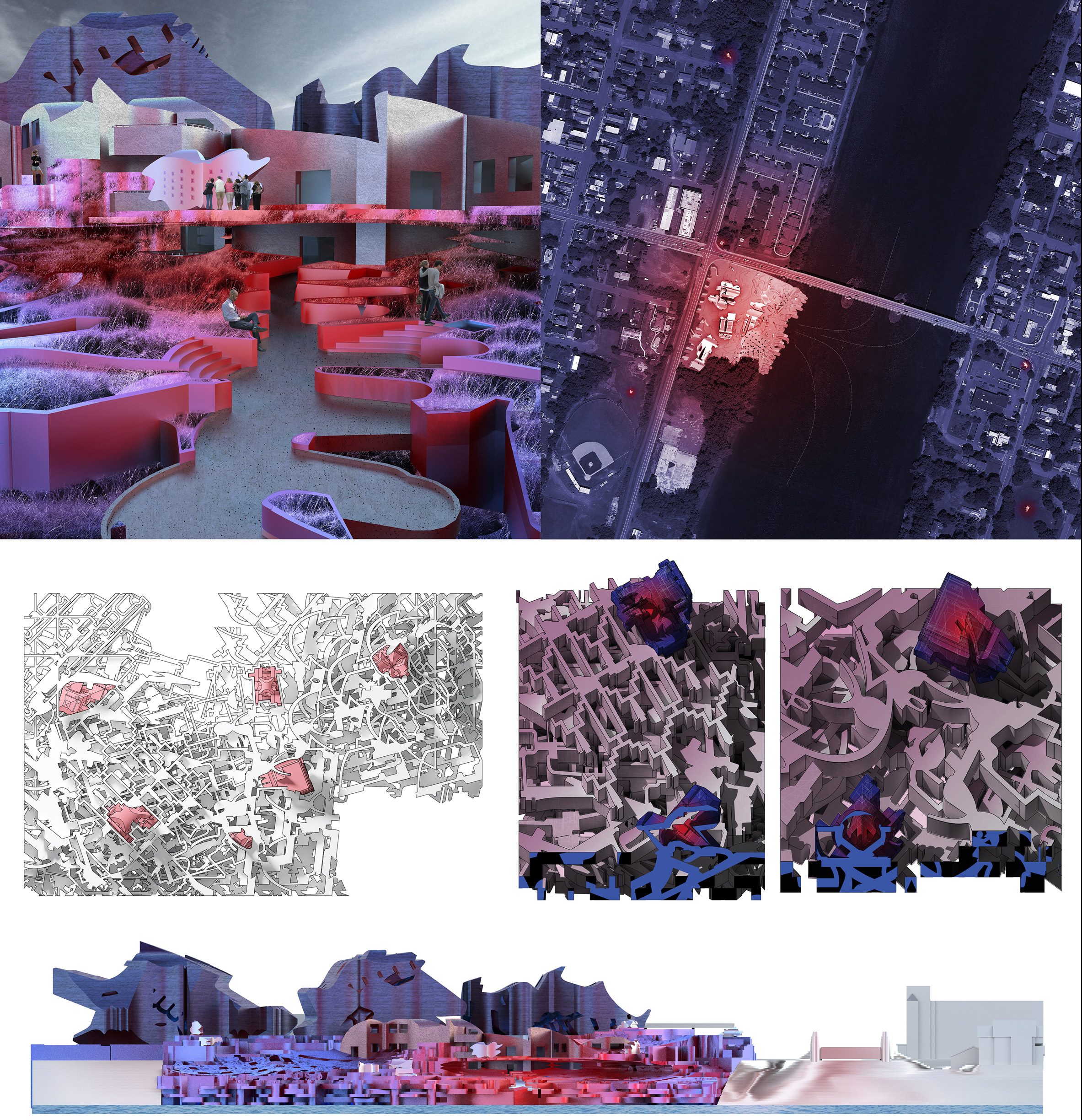 “Beginning with a study of discarded mechanical objects, Cohoes Gateway repurposes waste into experimental architectural forms. The project takes a postindustrial site in upstate New York as its basis and seeks to update its hydroelectric power infrastructure in a contemporary way.

“Emerging renewable energy technologies are integrated into a spatial grammar reminiscent of geological configurations, combining both natural and artificial elements into a hybrid language. The network of tendril-like formations constituting the project’s ground floor double as hydropower storage units and public spaces, which have the potential to branch out of the site and acquire an urban dimension.” 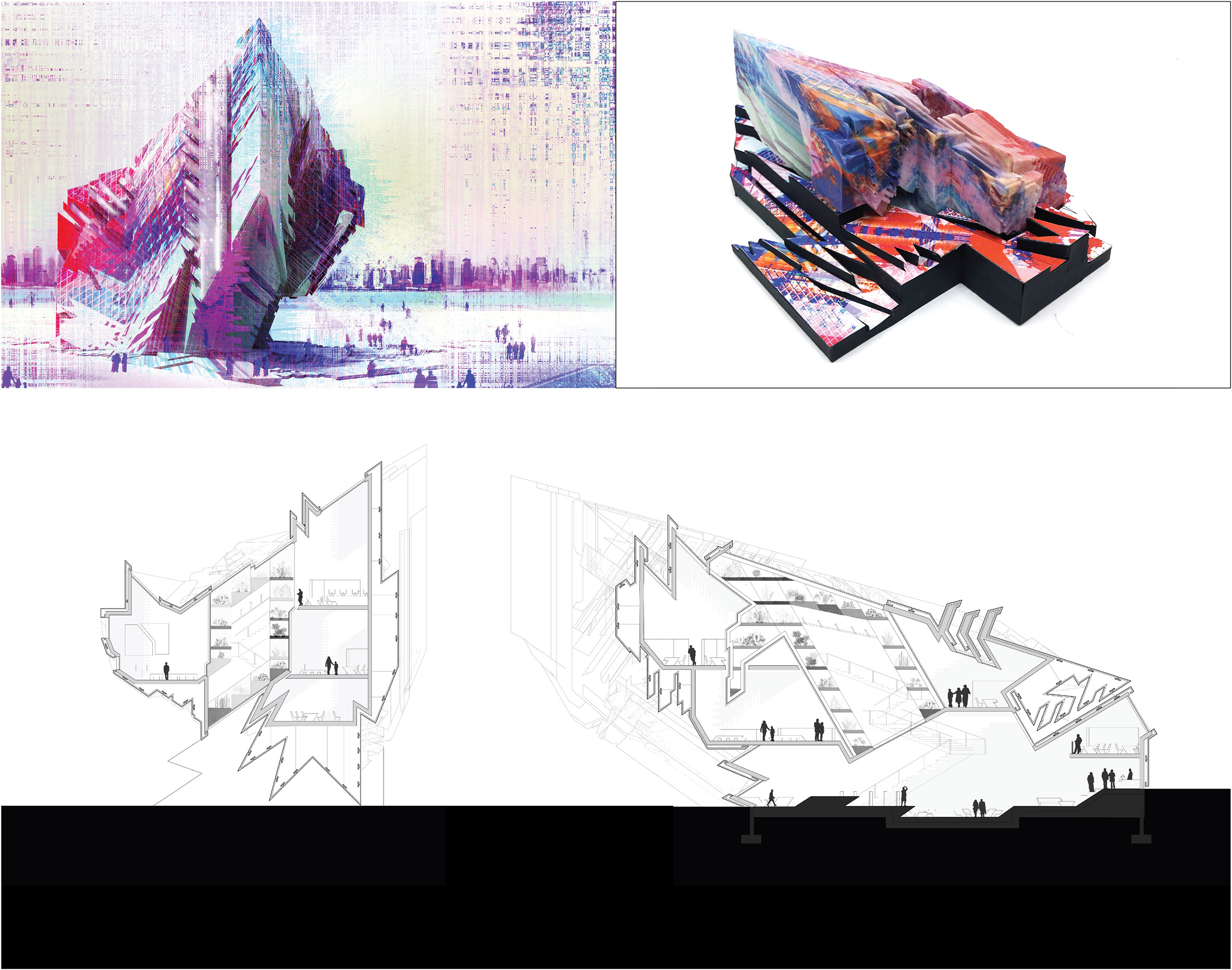 “This library proposal is located on the East River waterfront in Long Island City, New York, on the site of Steven Holl‘s recently completed Hunter’s Point Library. It reconsiders the function of a library in contemporary society and, rather than primarily storing books, serves as a botanical archive designed to educate visitors about plant species that are at risk of extinction due to climate change.

“The project also reconsiders the image of a library, with its form and aesthetics derived from ‘glitched’, projected images of OMA’s Seattle Public Library. The facade is an exploration of colour and complexity, realised via full-scale 3D-printed panels.” 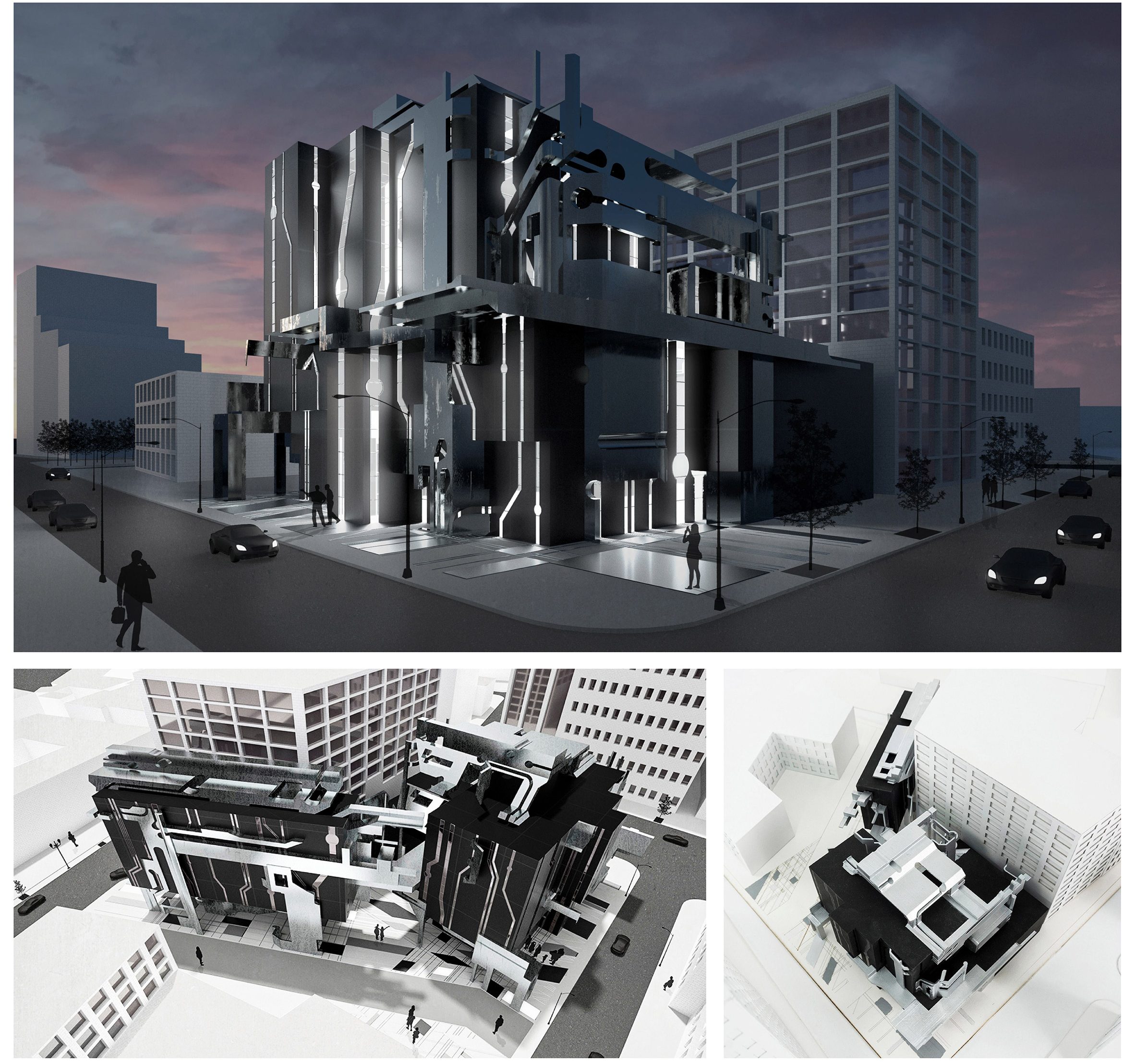 “Science fiction tells us about the world we live in by exploring the present through images of the future. In this way, it serves a critical function. Apocalyptic visions, utopian futures and social experiments are all familiar scenarios found in this multilayered and complex genre.

“The Museum of Science Fiction & Speculative Media, located at 57 State St Albany, New York, is an elaborate shrine dedicated to science fiction. This referential mass contains a series of gallery spaces, exhibiting a robust timeline of the genre supported by a theater and performance space, media research labs, administrative offices and retail spaces.”

“This project imagines a world in which Amazon began orchestrating a redevelopment plan for Detroit in 2018. The revamped image of the city centres around Amazon’s new headquarters, while rejecting cars in favour of a public transport system and pedestrian walkways.

“The urban overhaul would conclude with Expo ’51, an international exhibition welcoming works by celebrity architects to increase tourism and give Detroit a global presence.”

“Intimatopia explores how the increasing speed of cultural production and bifurcation can disrupt existing urban fabrics, in the hope of ultimately fostering a new sense of togetherness. Clustered habitats are injected into the cityscape and interconnected through synchronised electronic drum beats, reminiscent of the emergent collectivity of the 1980s.

“Yet, through this constant shape-shifting, it becomes apparent that togetherness dissolves into each and every one of us. Through the agency of our bodies, it has become impossible to capture our culture in the built environment. This stability has long been forgotten and what unites us as a community is also what inspired the forgetting in the first place. Sounds and rhythms are the only monuments that communicate and reverberate togetherness across the new cityscape.” 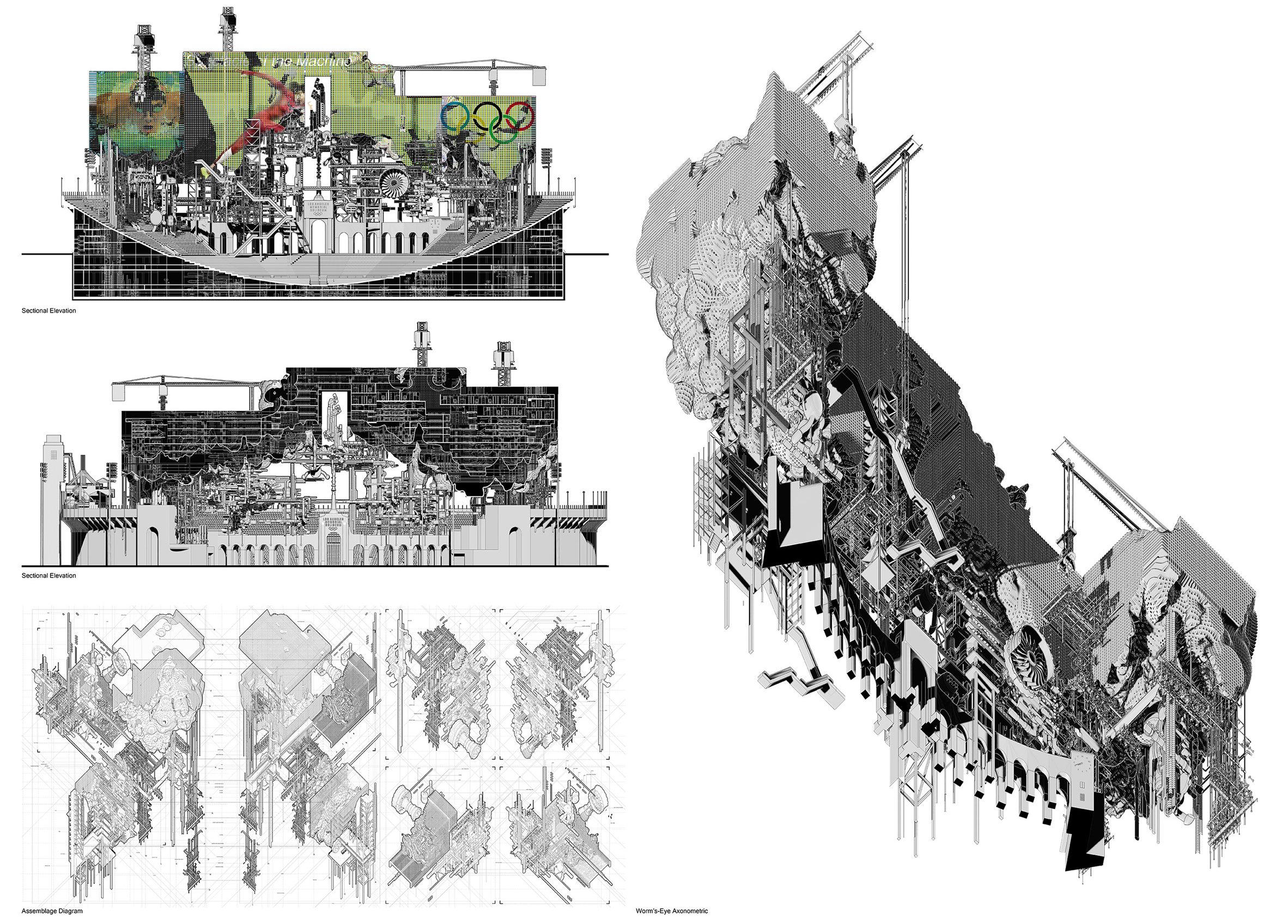 Power – After the Flame by Varun Chillara

“Politics and power in architecture have reemerged as prominent topics in the last decade and the increasing instability of international political structures has correspondingly influenced the built environment.

“Los Angeles hosted the Summer Olympics in 1932 and 1984, and will again host the Olympic Games in 2028. However, when they come to a close and the flame is extinguished, what will become of these venues? This project charts the interaction between different social and technological scenarios at varying scales from the city to the individual, so we can identify obvious but latent conditions that continue to affect today’s city.”

Beyond Ornament: Transforming the Mundane & Overlooked by Claire Liu

“The advent of digital technologies in architecture has opened up new possibilities for design. With the tools at our disposal today, ornaments can be pushed into unexplored territory by assembling them in a new way.

“Through excessive use, ornaments lose their decorative character and become something new. In order to push beyond the decorative, this project investigates the representational and functional dimensions of ornamentation in architecture. Through exploring excessiveness, a new artefact emerges based on the typology of a motel on Route 66.”