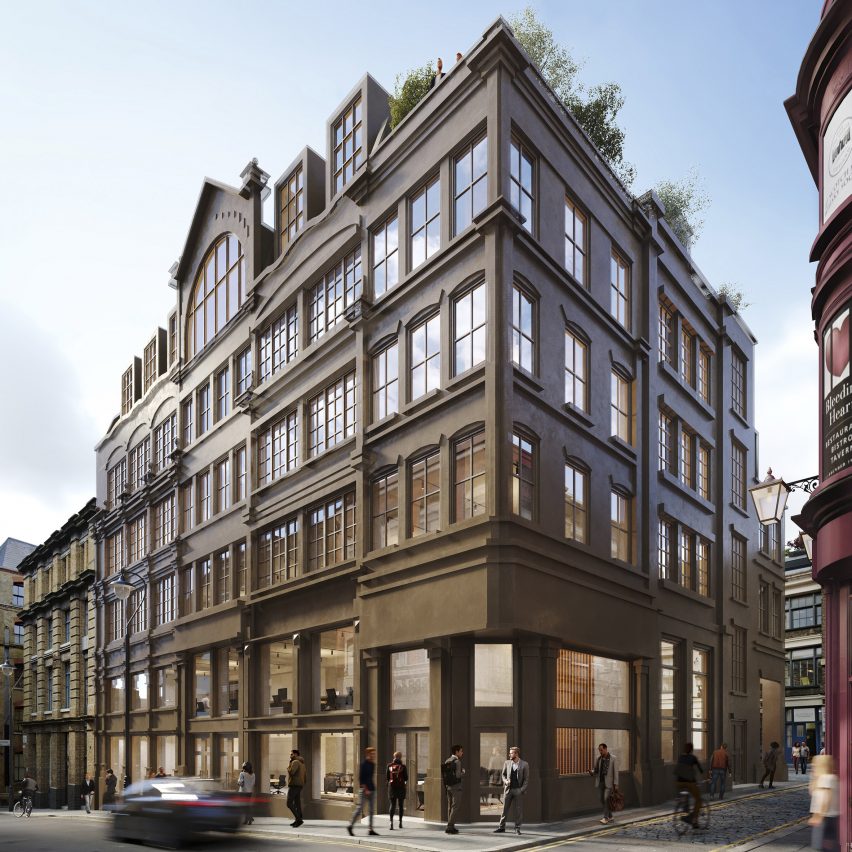 Architecture studio Groupwork is set to reinstate the facades of a group of 19th-century shops in Clerkenwell, London, as part of its renovation of a 1970s office block.

The architecture studio plans to clad the office block’s facade with a perforated brass structure that takes it shape from a group of eight Victorian and Edwardian-era shops that were demolished in the 1960s to make way for the current building.

Described by Groupwork’s founder Amin Taha as a “memory veil” the brass structure will be an edited version of the previous buildings’ facades.

“We intend to resurrect, in three-millimetre-thick mesh, the full form, roofline and details of eight 18th and 19th-century buildings cleared by the 70s office, but broken and suspended away from existing and new structures,” Taha told Dezeen.

The mesh will wrap around the Greville Street facade of the 1970s building and a rear cross-laminated timber (CLT) extension that will be built in Bleeding Heart Yard to reinstate the previous buildings’ boundaries.

The overall shape is based on research carried out by historic building specialist Donald Insall Associates.

“We asked Donald Insall to investigate the history, find any archived surveys and so on,” Taha told Dezeen. “Projecting from these the earliest footprint, form, rooflines and where and why the changes had occurred.”

“The result was then used to create a ‘memory veil’, which is broken to express the flaws, the misremembered bits, and then edited and altered to create an ideal that had never existed.”

Although the form is largely based on the previous buildings, the new facades will be simplified and have been edited by Groupwork.

“In addition to being materially different, it’s details are simplified and here and there lost and misquoted to create an edited narrative,” said Taha.

Along with the five-storey rear extension, a two-storey roof extension will be added to the building to increase its lettable area by 60 per cent. With the use of CLT and extra externally applied insulation the studio expects the office to achieve a sustainability rating of  BREEAM excellence.

The office won planning permission in 2018 and construction is expected to begin shortly.

The office block is not the first time Taha has aimed to recreate an edited version of a historic building. In Islington, the architect created a distorted replica of a 19th-century London terrace block, which was destroyed during the second world war.

With the designs, Taha aims to question ideas of conservation and the practice of retaining facades of historic structures.

“We are working with ambivalence, a conflicted desire for the past,” he said.

“Does ‘conservation’ become facade deep idealisations of the past – sometimes used for malign differentiation – or do we understand our inventiveness and process is the connection and continuity we seek with it?”

Led by Taha, architecture studio Groupwork is based in a self-designed office block at 15 Clerkenwell Close housing project that has a structural stone facade. Taha was ordered to demolish the building by the council, before it found missing planning documents and the building was saved.