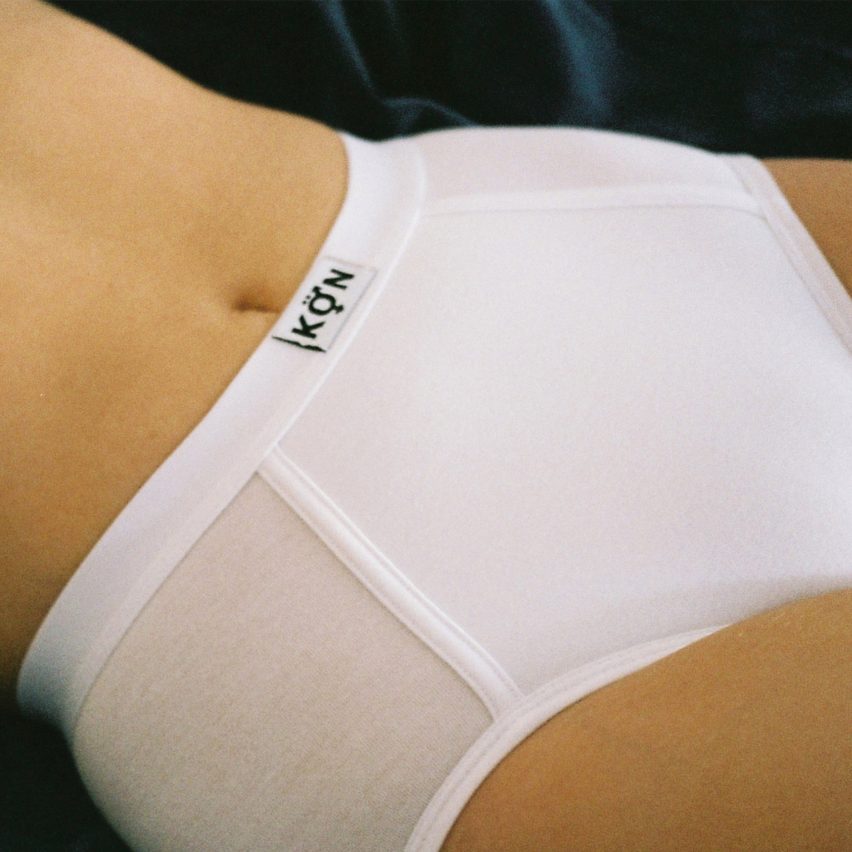 Swedish label Kön has produced a range of gender-neutral underwear to demonstrate that products “don’t have to be categorised” as just for men or women.

The underwear is made from plant-based textiles and comes in recycled paper packaging.

Wanting to create an inclusive brand suitable for everyone, Bill Heinonen founded Kön – a fashion company offering unisex underwear in a bid to give consumers the ability to “define some products themselves”.

“I was told that a gender-neutral underwear brand would never work, so I had to do it,” Heinonen told Dezeen.

“My vision was, metaphorically speaking, to create a blank canvas, and let the consumers be the artists who colour the brand – because the fit and look will always be different depending on who wears them.”

“And that’s the beautiful thing – we’re all unique, and we should embrace that,” added the founder. “We rather see people giving our underwear multiple identities, instead of us trying to force onto anyone another superficial idea of what fashion is, or who you should be.”

This idea of creating a blank canvas extends to the packaging design – a simple white box with the brand name embossed across the front and product information printed on the back.

Kön – pronounced “shaun” – takes its name from a Swedish word that stands for both gender and sex.

“I don’t want everything to be gender-neutral,” Heinonen explained, “but I think it’s important to give consumers that ability to define some products themselves.”

As Heinonen explained, creating genderless underwear was a challenge as there is typically a natural difference in physique and leg-size across the gender spectrum.

It took over three years to develop the products. The designers took elements from both mens and womens underwear to create a shape that closely resembles briefs.

It was also important to Heinonen for the product to be environmentally friendly. The underwear is made from 95 per cent modal fabric, which is spun from cellulose fibres extracted from the pulp of beech trees.

After the cellulose has been extracted from the pulp, it is made into sheets before being pulped into a liquid form and forced through a sieve-like device with myriad tiny holes that help to form the fibres.

The fibres are then made into a yarn, which is washed, bleached and dried, before being mixed with elastane – for comfort and to allow stretch – and loaded onto spools to be woven or knitted.

This process requires less land-per-tonne, according to the founder, and has a water consumption level that is 10-to 20-times less than that of cotton.

The underwear is available in one style and two colours – black or white – and comes in packaging made entirely from recycled paper.

Heinonen is one of many brands and designers creating genderless products to be more inclusive.

Last year, retailer Wild Flower created a genderless sex toy called Enby – after the acronym NB, which stands for non-binary – that has an abstracted shape and open-ended functionality.

Designers are also creating interior spaces that are free from gender stereotypes, such as Say No Mo – a beauty salon and cocktail bar in Kyiv that features concrete surfaces and gold accents.