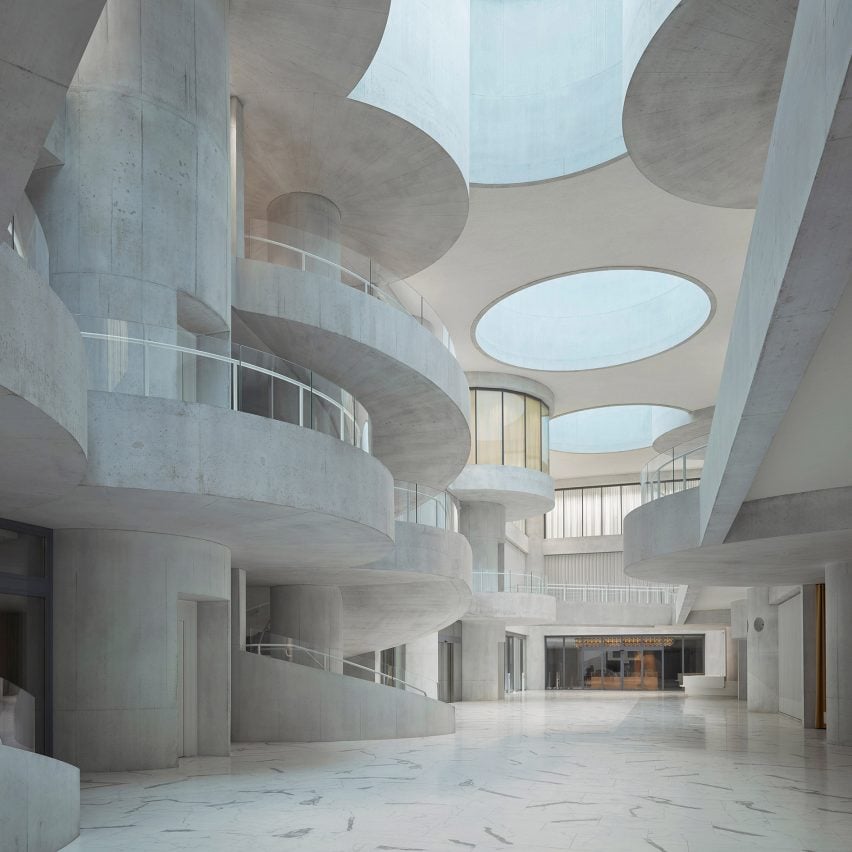 Architecture studio Christ & Gantenbein has completed a museum for chocolate brand Lindt alongside its headquarters in the Swiss town of Kilchberg on Lake Zurich.

Built alongside Lindt’s factories and corporate headquarters, Lindt Home of Chocolate contains a museum dedicated to the history of chocolate and the brand.

The entrance facade of the cuboid-shaped building, however, is clad in white glazed brick and shaped in a curve to create a focal point and public square.

“But the Lindt Home of Chocolate reacts with a cutout to form its entrance and a public space, so it doesn’t range in the purely utilitarian typology anymore,” the studio told Dezeen.

“Through this curvature, it becomes somehow monumental,” it added. “The gesture is emphasised by the change of material.”

Within the building, Christ & Gantenbein created a “playful” space to contrast the more utilitarian exterior.

“There is a certain contrast between its rather hermetic envelope and an open and playful interior,” said the studio.

“The chocolate is implicitly celebrated with round shapes, a soft touch, and maybe even a general sweetness.”

The museum is arranged around a large – 64 metres long, 15 metres high, and 13 metres wide –  atrium that contains the world’s largest chocolate fountain, which is nine-metres tall and topped with an over-sized whisk.

Surrounding the atrium a series of spiral staircases, round load-bearing pillars and circular balconies animate the space.

“Almost reaching an ancient Roman scale, we’ve created an exaggeration of industrial production with a certain tension; a tension that gives a strong presence to the architecturally distinct elements that define the interior, bridging the substantial gap between a commercial ambience and classical grandeur,” said Christ & Gantenbein co-founder Emanuel Christ.

“To celebrate the experience of chocolate in many ways, we’ve scripted the Lindt Home of Chocolate’s interior as a space that orchestrates the movement of people.”

Alongside the atrium on the ground floor will be a reception area, a 500 square-metre shop and a cafe, which also has outdoor seating.

The museum exhibits including an interactive chocolate tour, which were designed by Atelier Brückner, were placed on the floors above.

Architecture studio Christ & Gantenbein, which is led by Christ and Christoph Gantenbein, was named Architect of the Year in Dezeen Awards 2018. The studio has previously completed a concrete extension to the National Museum Zurich and designed a monochrome building for Kunstmuseum Basel.