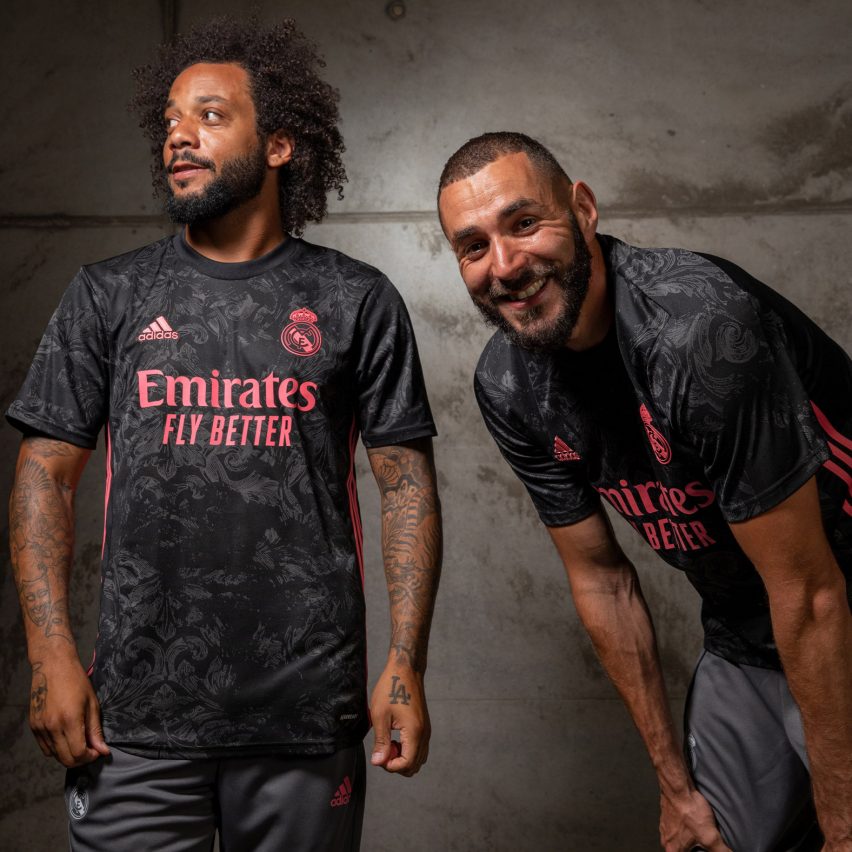 Sportswear company Adidas has created a baroque-style football kit for Spanish club Real Madrid, which incorporates the patterns found on Azulejos tiles in the city.

The third shirt for Spanish top-tier football club Real Madrid features a grey, faded floral pattern printed over a black base colour, and will be worn during the upcoming 2020/2021 season.

Adidas designed the print as an interpretation of Azulejos – a type of Spanish and Portuguese ceramic tile that was first made in the 13th century, and can be found on many baroque buildings in Madrid.

The designers hope that the print will help tie the shirt’s design to the city.

“After some research and immersion into Madrid culture, we discovered the Azulejos were very prominent in the city and also commonly in baroque style,” said Marco Omiccioli, graphic and apparel designer at Adidas.

“We and the club felt this was a strong connection to the city and to the daily life in Madrid – something everyone can relate to whilst still being a thing of beauty and art,” he told Dezeen.

Adidas took the traditional tile pattern as the basis for the design, before redrawing it and presenting it in a grey and black colour combination in contrast to the typically vibrant ceramics.

“We then took inspiration from this and merged it with Real Madrid DNA to bring a unique story to the third kit,” said Omiccioli.

“The artwork was also created using a certain amount of distress to the look so that it more accurately reflects the look of the Azulejos and their antiquity, but fused with a modern and progressive colour palette that gives it a contemporary and lifestyle feel.”

The Azulejos-informed pattern will also be used on the kit’s shorts. Details, which include the club logo, Adidas logo, sponsor name and stripes running down the sides of the shirt, are coloured in a bright pink hue.

Adidas’s baroque-style kit for Real Madrid is just one example of its designers taking cues from various art movements for this season’s kits. The sportswear company also created a shirt for London club Arsenal that was informed by the club’s art deco history.

“The creative direction of the season was looking at football through the lens of art, and Madrid is a city full of artistic history, so we wanted to find a different angle to that topic,” explained Omiccioli.

Adidas also created a dazzle camouflage shirt for Manchester United this season, as well as a kit for FC Bayern Munich that pays homage to its Herzog & de Meuron stadium.