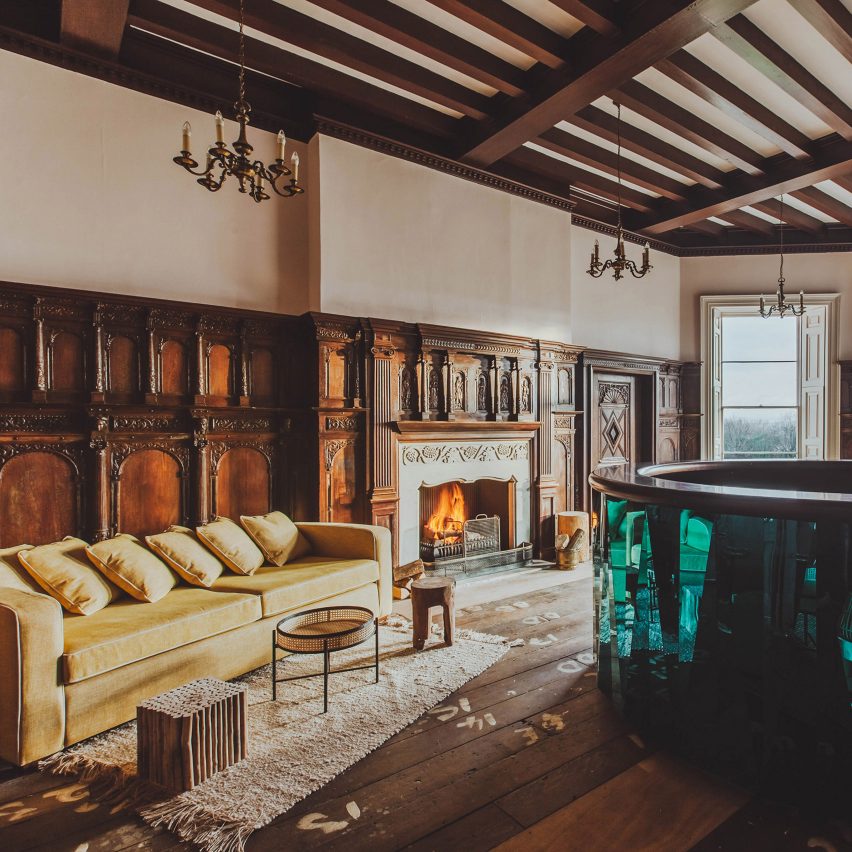 Architecture studio Red Deer carried out an understated overhaul of a centuries-old mansion near Hertfordshire, England to form the Birch hotel, which is designed to challenge the idea of luxury.

Birch is set on a 55-acre estate in the English town of Cheshunt, occupying a heritage-listed brick mansion that dates back to 1763.

While respecting the grandiose nature of the mansion, the studio wanted Birch to shift perceptions of luxury hotels.

“[We] consider the term ‘luxury’ as degraded through overuse, and the parameters of what constitutes a ‘luxury hotel’ can be tricky to define,” said Red Deer.

“For [us], luxury comes from the creation of a meaningful emotional connection between the hotel guest and the space they inhabit.”

“As the landscape for luxury hospitality has evolved, the onus is now focused on creating a unique and personalised one-to-one experience for guests,” it continued.

The guest rooms of the Birch hotel are therefore slightly stripped back in appearance, finished with white-painted walls, exposed-wire lights and simple rattan headboards.

TVs and work desks have also been purposefully omitted so that guests can completely detach from the stresses of everyday life.

The stands are anchored by colourful orb or pill-shaped bases that Kidger has crafted from waste plastic, held in by sycamore and ash wood frames made by Hendzel.

Spokes of the frame extend up to form clothes hooks, balance flower vases by Payne or support hand-beaten copper bowls by Naujalis that can hold knick-knacks like keys or cash.

“It felt crucial to bring local artists and makers on-board to work on the interior projects and create some truly unique pieces to be enjoyed by the guests, challenging the idea that uniformity was essential for large batch runs of furniture,” added the studio.

Throughout the rest of the hotel Red Deer has tried to “only intervene where it counted”, contradicting the typical “wastefulness” associated with luxury spaces.

Several spaces still boast the building’s original panelled walls and ornate cornicing. This includes the mint-green cinema room, where guests are invited to sit and watch the latest films or documentaries from striped deck chairs.

The spacious coworking area has patchy plaster walls, while the reception room features elaborate wooden boiserie and floorboards marked with white-painted numbers left behind by builders from the building’s last renovation.

Rather than trying to cover them up, Red Deer instead decided to keep them as a quirky design feature.

The central concierge desk, which has a faceted blue-metal base, brings a modern touch to the room.

“We wanted to take a light touch on the existing features and celebrate the Georgian building,” said ​Ciarán O’Brien, co-founder of Red Deer. ​

“The building created a really strong backdrop, so we looked at each space from the point of what already existed,” he continued. “Any intervention within a space needed to work with that, and once you build that design story it allows us to imagine how that room will operate.”

Other on-site experiences that guests can enjoy include an interactive bakery, a pottery workshop, fitness studios and an open-air swimming pool.

There are also three restaurants: Zebra Riding Club, which will serve “unfussy” dishes made with ingredients from Birch’s farm, The Gun Room, a wood-lined private dining room that seats just eight guests and Valeries, an all-day eatery that features sky-blue walls and chandeliers dangling from the ceiling.

Red Deer is based between London and Barcelona and was founded by Lionel Real de Azúa, Ciarán O’Brien and Lucas Che Tizard.

Previous projects by the studio include a pastel-green pasta restaurant and a virtual reality arcade which has neon interiors inspired by the work of artist James Turrell.

Photography is by Adam Firman unless stated otherwise.