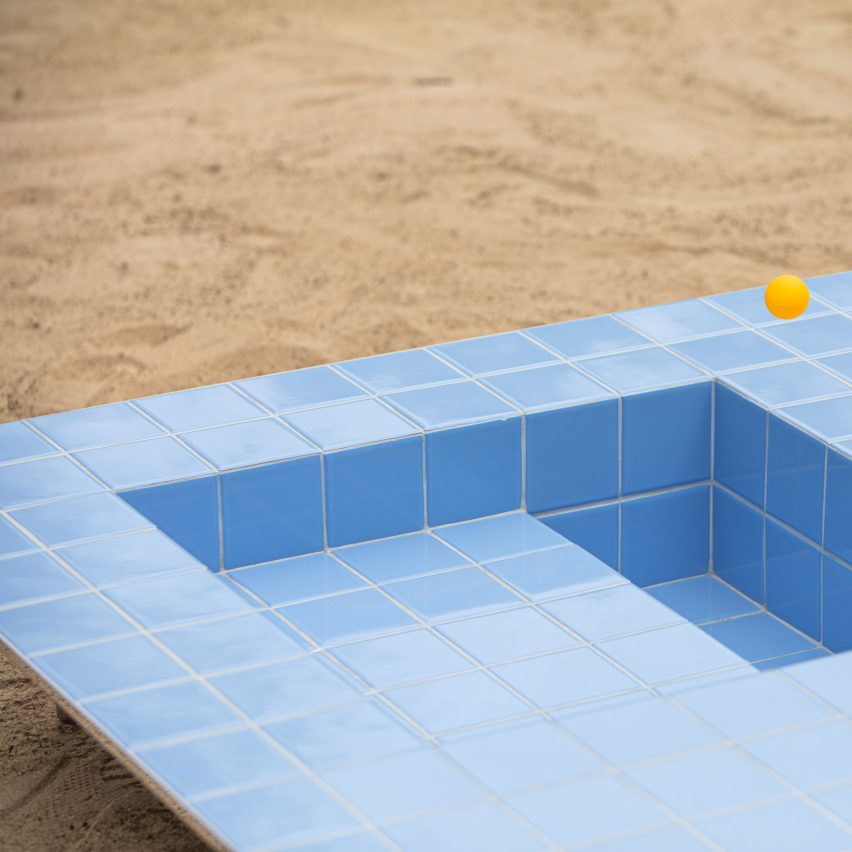 Brazilian design studio Alva has created tables with cut outs covered in recycled blue tiles to look like the basin of swimming pools.

Aptly called Piscinas, which translates as swimming pools from Spanish, the collection is composed of five designs that can function as tables or seats. They are called Fundo Azul, Piscina Azul, Rampa Cinza, Raso Rosa and Quadrado Amarelo.

Each is either partially or entirely covered in used tiles that the studio found in places they said are known in Brazil as a “tiles cemetery” to give the pool-like effect.

Two of the tables, Fundo Azul and Piscina Azul, also have rectangular cutouts like the shape of a pool.

Fundo Azul has a wooden top offsetting an indent covered in blue tiles, while Piscina Azul is all blue and has a stepped cut out.

Playing with the illusion of them being small pools, Alva created short videos of  ping-pongs bouncing over the tables and their pockets with the sound of splashing water in the background.

“We investigate the possibility of stripping furniture of its normal significance, abolishing unique truths and restoring the powers of imagination,” Alva said.

“Objectivity and subjectivity can coexist, bringing new ways for the user or observer of exploring the object and making room for memory activation.”

Other tables in the series have a Z-shaped profile formed of two flat tops set at different levels on steel legs and a sloped middle. Rampa Cinza is larger and longer and covered in blue tiles while Raso Rosa is a shorter version covered in off-white tiles.

The final design, Quadrado Amarelo, is a small side table with a yellow tile top.

All the tables in Piscinas are designed to be used both indoor and outdoor, exceptfor Fundo Azul, which has a top formed from an MDF base and a natural wood top.

Other designs intended to create illusions include a series of mirrors by Bower Studios that look like arcades, porthole windows and arched doorways.

Photography is by Studio Tertúlia. Videos are by Companhia Filmes.