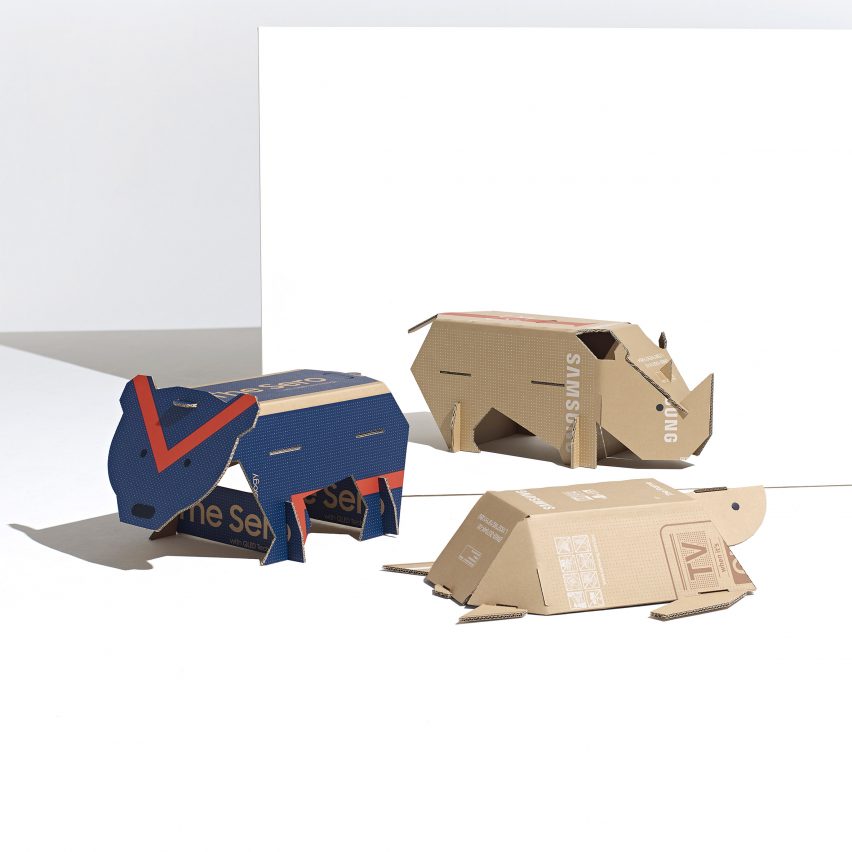 A series of animal companions created by Sarah Willemart and Matthieu Muller has been named the best design in Samsung and Dezeen’s contest to create innovative household objects by repurposing cardboard packaging.

Willemart and Muller beat four other finalists to claim the top prize of $10,000 in the Dezeen x Samsung Out of the Box Competition with their Endangered Animals design.

The contest drew from Samsung‘s Eco-Package concept, which aims to reduce waste by providing customers with a way to repurpose corrugated-cardboard television packaging into new household items.

Second place was awarded to André Cardoso for his The Rider rocking horse, while Revaz Berdzenishvili finished in third place with his stepped storage unit called Kibe.

Willemart and Muller’s Endangered Animals series comprises a polar bear that can be made from an Eco-Package for Samsung’s The Sero television, a black rhinoceros that can be constructed from The Serif TV box and a sea turtle that can be built from The Frame TV packaging.

The animals, which can be used as toys, storage, or decorative household objects, are intended to help teach children about declining biodiversity.

“It was a very difficult choice, but this one stood out,” said Julien, corporate vice president and head of the UX team at Samsung.

“It is simple, easy and really fun to make for the whole family. And, for sure, children will love it.”

“The intention of letting our children know about endangered animals in an effective way impressed the jury,” said Kim, corporate vice president and head of the design team at Samsung.

“As an idea, it is fully aligned with the intent of Samsung’s Eco-Packages.”

The competition is one of the most successful design contests Dezeen has ever run.

Willemart and Muller’s design came out on top of over 1,500 submissions from 82 different countries around the world.

The entries were initially narrowed down to a shortlist of 15 designs. From this, the jury selected five finalists and then the overall winner.

Each design was assessed on its innovation, aesthetics, functionality and how practical it would be for someone to build at home, with the Endangered Animals design coming out on top.

“As we just graduated from the RCA, winning such a prestigious competition means a lot to us,” said Willemart, who is currently based with Muller in Waterloo, Belgium.

“Declining biodiversity is largely the result of human activity,” added Muller. “So it’s great to see a company such as Samsung taking the initiative to reduce waste.”

Samsung’s Eco-Package concept encourages users to re-use the corrugated-cardboard box that their TV is shipped in by providing instructions for different furniture designs through a QR code located on the box.

Each box is printed with a special dot matrix pattern, which can be used as a guide to create a range of different objects for the home by cutting and reassembling the box.

Currently, Samsung ships The Sero, The Serif and The Frame televisions in Eco-Packages, but the company plans to expand the concept across its entire television lineup.

“We think all the entries were really strong, particularly the winning design,” said Kim.

The video in this story was produced by Dezeen for Samsung.

Still photography is by Benjamin Swanson with set design by Jam Studios and retouching by The Wizard Retouch.