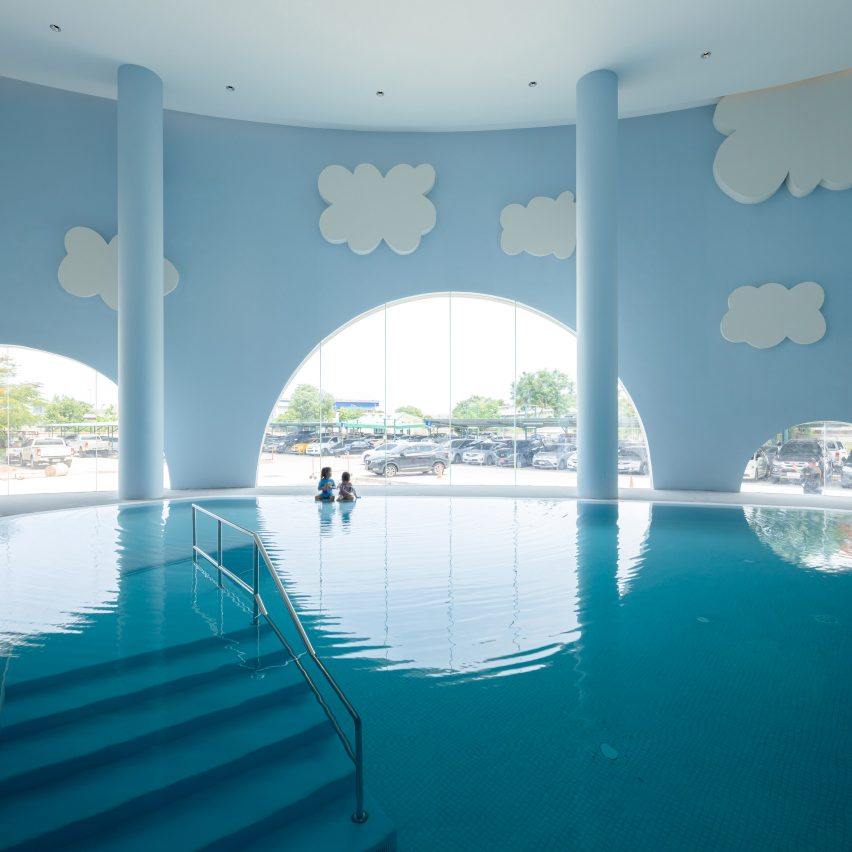 Design studio Integrated Field has created colourful arched interiors filled with animals and clouds to provide an enjoyable experience for children at a hospital in Samut Sakhon, Thailand.

Playful touches in EKH Children’s Hospital include a bright yellow slide that spirals through the reception and animal shapes above hospital beds and light-up constellations that act as night lights.

EKH Children’s Hospital has been shortlisted for leisure and wellness interior of the year at Dezeen Awards 2020.

Integrated Field wanted the young visitors to the medical facility to be put at ease in what can be a scary and unfamiliar place.

The designers put fun elements, such as clouds above an indoor swimming pool and soft play areas in the waiting rooms, to help distract children who could be nervous or feeling unwell.

“Imagine being a kid dreading going into the hospital, the slide will definitely make you stop crying,” said the studio.

“The waiting area of each clinic is designed into a playground, which becomes something of a burden for the parents when having to convince the kids to leave the hospital.”

An indoor swimming pool adds to the fun, with arched windows that form circular reflections in the water and white clouds decorating the walls against a sky-blue backdrop.

In the pharmacy, the play area is designed so that parents can easily keep an eye on their charges when they’re waiting at the counter.

Arches above doorways and alcoves and rounded seating areas were all designed with a child’s perspective in mind, and these architectural elements were scaled to their height.

Rooms are painted in soft pastel tones, including pink, blue and yellow.

“As a kid, we all create our own imaginary world when we are experiencing a space for the first time,” it added. “Each specific colour refers to a specific animal representing each zone, such as sky blue for whales.”

Rooms for overnight stays are given animal themes to make them more appealing – Whale, Turtle, Lion and Rabbit Constellation.

The animal’s outline is picked out on the ceiling so that it is visible during the day. At night, soft lightbulbs and glow in the dark strips pick out a constellation of stars that acts as a comforting nightlight.

Lighting in all of the hospital rooms and corridors is also designed to be soft, rather than the harsh fluorescent lights usually found in hospital settings.

In the hospital bathrooms, the girls’ toilets are tiled pink and the boys’ yellow. Sinks and urinals are set into arched alcoves, with half of the facilities placed at a child’s height for easy access.

On the exterior facade, pastel-coloured metal screens have perforations that form the shape of animals.

“As adults, we find ourselves amazed if not a bit jealous by the mesmerising variety and development of children’s toys or even snacks these days,” said the studio.

“EKH Children Hospital will change everyone’s perception about what the space of a children’s hospital can be.”

Integrated Field was founded in 2011 and is based in Bangkok.

Other colourful children’s hospitals include a hospital in Brisbane with a colourful facade and a layout inspired by trees, and a brightly coloured children’s outpatient clinic in Kyiv that is also designed to be deliberately un-threatening.

The post Integrated Field decorates children’s hospital in Thailand with slides and a pool appeared first on Dezeen.