Lee Broom’s Maestro chair is an homage to classical instruments 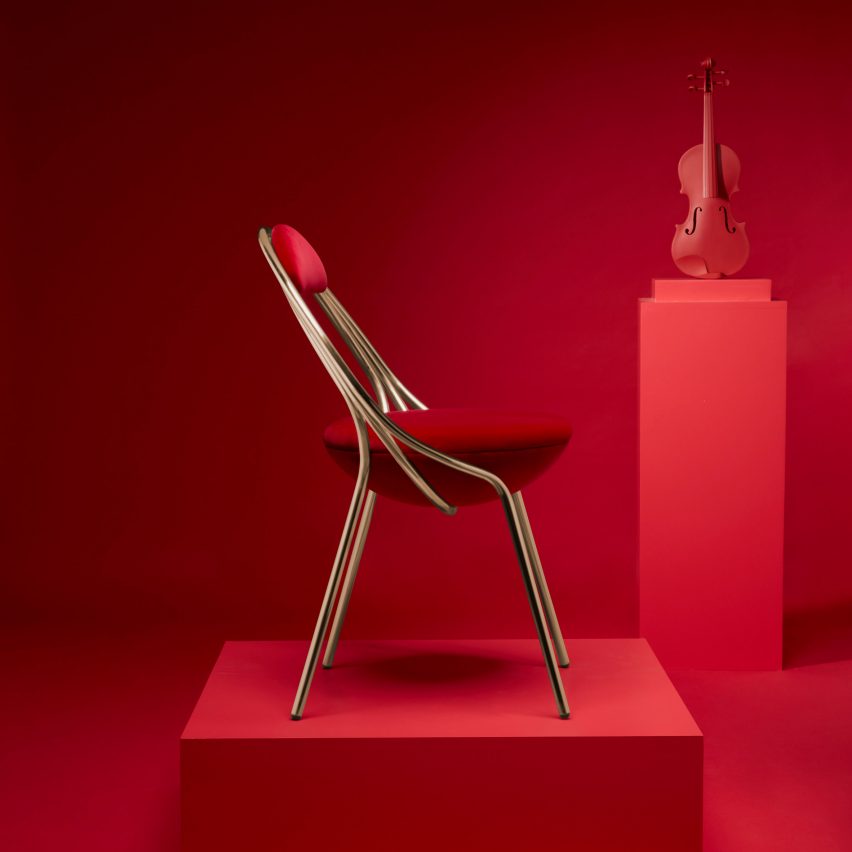 Products fair: London designer Lee Broom has taken the London Design Festival as an occasion to release his first seating design in 10 years, with a frame made of hand-bent steel tubes curled around a plush seat.

The design is intended to suggest the undulating coils and wraps of musical instruments and in particular the brass section of a classical orchestra.

“Music informs a lot of my design work, from the initial process of sketching and listening to background music to choosing the right pieces to play at exhibitions,” said Broom.

“When I was designing Maestro, I was listening to more classical pieces and this led me to start looking at the design of classical instruments. They are incredible pieces of design that not only look exquisite with their twists and coils, but also have a very specific function, and I like those parallels between that and a chair.”

The tubes, which can be rendered in brass, chrome or black, are stacked on top of each other to form a three-tiered circular backrest.

When they reach the seat, the highest and lowest tube juts out to form the front and back legs respectively, while the central one wraps all the way around the seat, cradling it in its curvature.

The hemispherical seat itself can be covered in almost any fabric, thanks to a newly established upholstery workshop in Broom’s own east London factory.

“More so now than ever, people want variation and something unique. We see this with a lot of our products, so for a chair it was vital that we gave customers as many options for upholstery as we can,” he said.

“We found the best way to do this was to take control of the upholstery ourselves to make sure we can satisfy demand. The more control we have over the process the better.”

The chair is currently on view as part of a pared-back, pandemic-friendly version of LDF, in a window installation at Broom’s showroom.

For those unable to attend, the chair is also being presented in a film (top), in which a classical orchestra performs a selection of compositions including Claude Debussy’s Clair de Lune while sat on Maestro chairs.

“The idea for the film really stems from seeing the New York Philharmonic play in Manhattan last year, it quickly became my ambition to watch a live orchestra play some of my favourite pieces of music sitting on my chair while presenting the furniture in a way that hadn’t been done before,” he said.

Before this, Broom’s last seating release was the Hanging Hoop Chair, which recently featured in Beyoncé’s Black is King visual album.

Otherwise, the designer has largely focused on lighting, with his contribution to last year’s LDF consisting of a kaleidoscopic light installation that created the feeling of “stepping into a Tardis”.

The post Lee Broom’s Maestro chair is an homage to classical instruments appeared first on Dezeen.