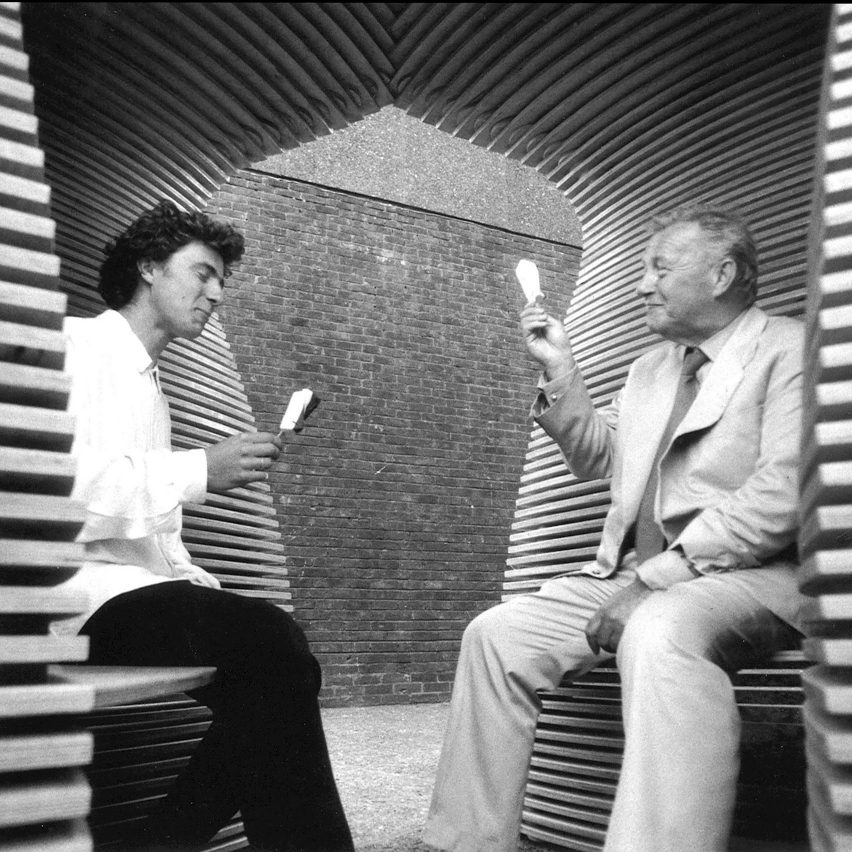 British designer Thomas Heatherwick is one of the numerous designers to have paid tribute to Habitat and Design Museum founder Terence Conran who passed away last week.

Conran was best known for founding retailer Habitat in the 1960s, which is widely credited with popularising modern continental European design in the UK. He passed away aged 88 at his home in London on 12 September 2020.

Heatherwick, who first met Conran while studying at the Royal College of Art, led the tributes to the “visionary and determined designer”.

“I feel so privileged to have had Sir Terence Conran as a mentor and lifelong friend and will miss him greatly,” said Heatherwick.

Conran “revolutionised how we think about our homes”

The founder of Heatherwick Studio credited Conran with bringing modern design and food to the UK through his Habitat brand, the founding of London’s Design Museum and establishing a series of restaurants.

“For me, Sir Terence Conran was one of a small handful of amazing people who dragged Great Britain out of the post-second world war gloom and modernised the country by revolutionising how we think about our homes, the products we buy for them and even the food we eat and how we eat it,” he said.

“The unique and undeniably distinctive stamp of Sir Terence Conran changed the way the rest of the world thought about Britain and it changed the way so many of us think about design,” he added.

After Heatherwick’s first encounter with Conran, the Habitat founder became a mentor to the young designer, buying a pavilion from him (pictured top) and giving him an early commission to design interior displays for The Conran Shop.

“He became part of my life when visiting the Royal College of Art in 1993 and I was there studying design. Even though my tutor had insisted that he would be too busy I knew I needed to speak to him and managed to catch him on the fire escape stairs for a conversation,” recalled Heatherwick.

“Terence was immediately so generous with his time and this conversation was to continue for the next twenty-six years.”

“The inspiration for chasing someone down a fire staircase was because Terence was unique in the way he was both a visionary and determined designer as well as someone who instinctively understood how to connect people to ideas,” he continued.

“It was too easy for the design world to talk to itself but he wasn’t interested in this; he was busy democratising design and bringing incredible taste to everyone. He was a ray of hope to me when everyone else in design seemed to be stuck in the bubble.”

“His generosity to those who clearly had talent has been unrivalled”

Alongside Heatherwick, numerous designers highlighted how Conran had helped them get started when they were young.

“Aside from a career that’s defined modern British living, one of the things I’ve been so struck by is how many people he helped in their early careers,” wrote furniture maker Sebastian Cox on Instagram.

“From eminent designers telling stories of how he was their first customer, to writers sharing tales of him co-authoring their career-starting books; his generosity to those who clearly had talent and would benefit from an opportunity has been unrivalled.”

Design commentator Max Fraser thanked Conran for championing his and others work.

“Sir Terence Conran helped to shape my career in ways he wouldn’t have even realised,” he wrote on Instagram.

“The man achieved so much and championed the careers of so many others. He gave millions of people an understanding of this thing called ‘design’ and paved the way for so many talents to build on it. Thank you for having faith Terence. For that, I will always be grateful.”

“Inspired a whole generation and beyond”

Conrad opened the first Habitat store in 1964, the first The Conran Shop in 1973 and founded the Design Museum in 1989. He was also a prolific restaurateur, opening the Soup Kitchen and Orrery in London the 1950s, his Neal Street Restaurant in 1970 and founding the Conran Restaurants Group in 1991.

Dezeen’s editor-in-chief Marcus Fairs recalled the impact that Habitat had on him when he first visited as a child.

“Terence influenced me long before I had heard of him,” said Fairs. “I strongly remember my parents taking me to a branch of Habitat when I was very young, probably in the very early seventies, and being full of wonder.”

“I had never seen anything like the store, or the products, before,” he continued. “The visit left a powerful impression on me and it was a seminal moment in terms of the development of my own taste. Later, I would pore over a Habitat catalogue my parents had at home and, of course, Habitat was the first place I headed when the time came to furnish my own place.”

“Good bye Terence with love and respect for all you did in this world – democratizing design for one,” added New York designer Karim Rashid.

While designer Roger Arquer said he “inspired a whole generation and beyond. Instrumental in leading the way for the acceptance of modern design and culture in the UK. A legend.”