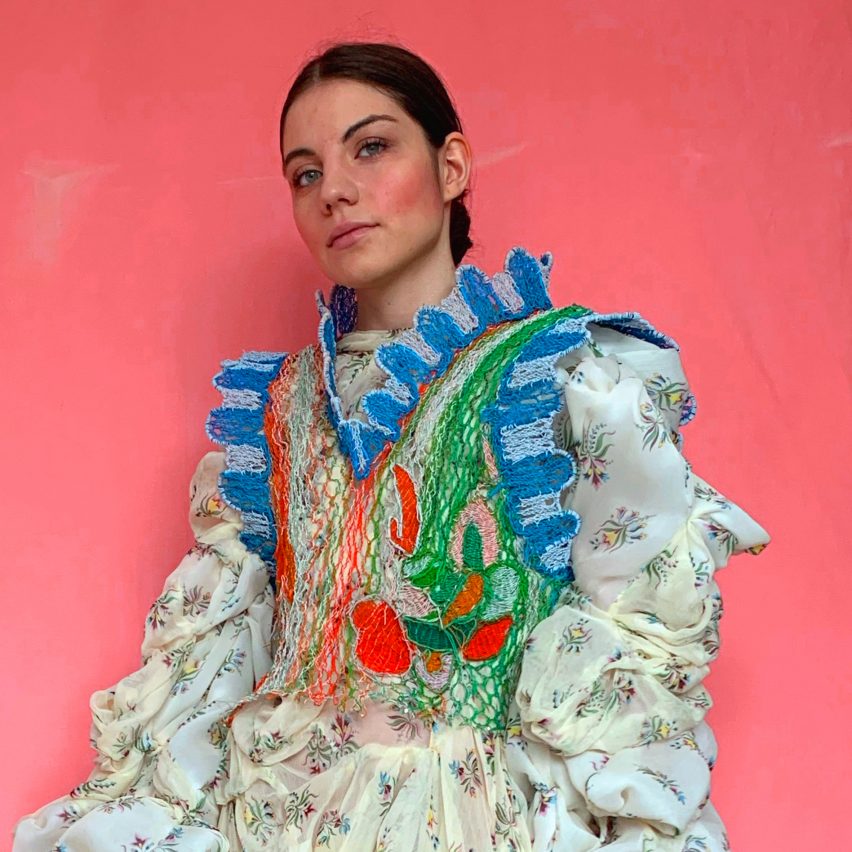 The multicoloured cables grace everything from a scallop-edged vest, to a bustier with pink velvet straps and two intricate, floor-length dresses.

Sipa made the collection to make a small dent in the 50 million tonnes of electronic waste, called e-waste, that is discarded annually. The UN estimates the combined weight of electrical items thrown away each year could triple to 120 million tonnes by 2050.

To create the e-waste garments, the designer adapted the traditional technique of bobbin lace, where threads are wound onto elongated spools called bobbins in order to make them easier to handle and twist together.

Every garment starts with the pattern laid out on a board, with pins inserted at crucial points throughout, around which the wires can be looped.

“It took a lot of practice to get the wires to mimic the softness of traditional lace. And there’s not much room for error when it comes to making the patterns. I have to be very precise when I start a piece, as I can’t cut it up or unravel it when it is finished.”

The designer sourced the cables from a London recycling centre, making sure to avoid potentially harmful materials such as fibreglass.

Since the wires were used in their raw form, Sipa was careful to refine the garments to ensure a comfortable and polished finish.

“Finishing the garments to a luxury standard is the most difficult part, and it varies from piece to piece. It needs to be wearable and look beautiful,” said the designer, who has previously worked for high-end fashion houses including Oscar de la Renta and Balenciaga.

“For the A-line lace dress, I adapted the Romanian technique of point lace to finish the entire bottom of the dress and any loose wiring, creating decorative oval petals. The challenge is to find aesthetically pleasing solutions to practical issues.”

By repurposing a post-consumer waste material through traditional lacemaking techniques, the designer hopes to capture the “contrast between heightened austerity and extreme femininity” that she has observed in her native Romania.

Here, Sipa says, women get dressed up in glamorous, hyper-feminine getups to go to the supermarket, presenting a picture of abundance while behind closed doors even the simplest of belongings is cherished and endlessly repaired.

“In Bacău, Romania, we don’t throw anything away. The most mundane objects are treated like treasures. No matter the value, they are kept to last a lifetime,” she said in the collection’s teaser video.

The collection also incorporates other reclaimed materials, with a floral blouse made from garment factory offcuts and a jacket stitched together from kitschy beach towels found in Bacău charity shops.

“The cost of doing a fashion degree is so high that any way to save money is welcomed. Exploring the potential of turning waste materials into luxurious fabrics is the most affordable way to innovate on textiles for a student,” she said.

Jiyong Kim, another one of this year’s CSM graduates, used antique curtains and other vintage fabrics to create his menswear collection Sunlight Matters, which is bleached through sun exposure instead of harmful chemicals.